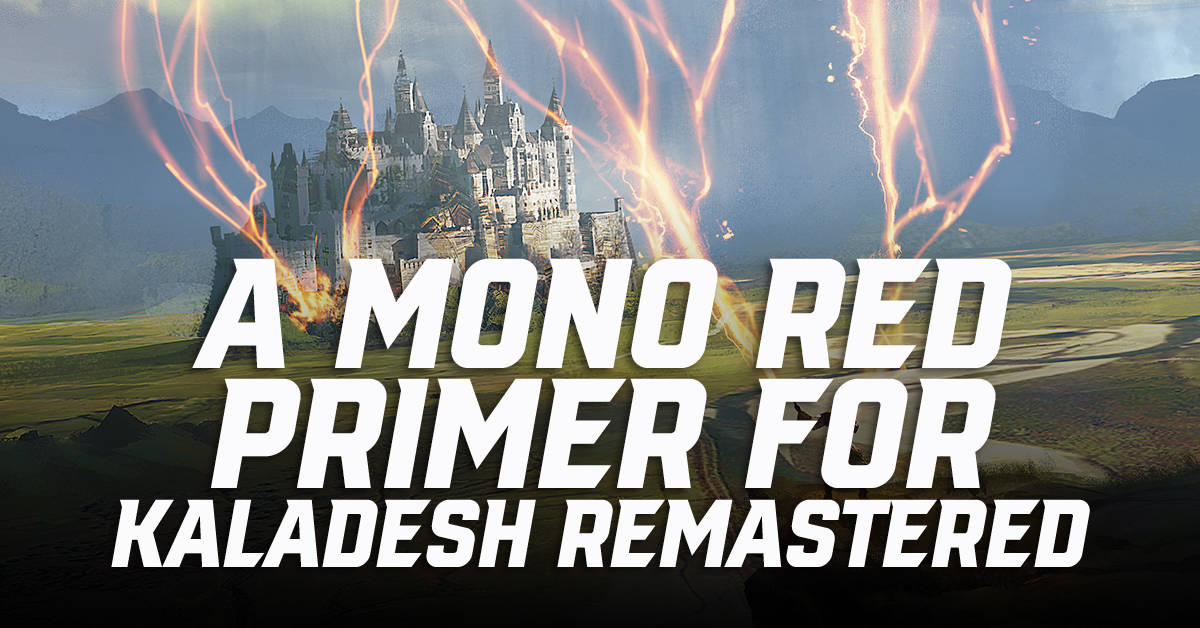 This week I decided it was time to take a break from writing about Yorion. Although I managed to secure an invite to the SCG Kaldheim Qualifier #1, I was unfortunately knocked out after three losses, crushing my dreams of qualifying for the Kaldheim Championship with UW Control (for that weekend, at least). While I knew the Kaladesh Remastered set release was coming, I wasn’t thinking about Historic in any way shape or form. Then, StarCityGames announced this weekend’s Kaldheim qualifier weekend would be entirely Historic. I quickly skimmed the spoiler to refresh my memory. Although the go-to deck everyone is talking about seems to be a variation of Aetherworks Marvel, I couldn’t help thinking about what to do with my favorite gift-delivering friend…

The first thing to note about Mono Red in Historic is that the archetype retains a wide card pool, but more importantly contains the card pool of when it was the best deck in standard back three years ago. It retains the wizard package of Viashino Pyromancer, Ghitu Lavarunner, Soul Scar Mage, and Wizard’s Lightning, along with powerful cards like Goblin Chainwhirler. The deck has new additions to it that enhance it from its 2017 standard predecessor. Now we get to add Light up the Stage, Skewer the Critics, Bonecrusher Giant, and even Grim Lavamancer to the list, all cards that synergize well together. Bonecrusher is a nice modal card that triggers prowess and is an insane draw in the mirror (even better if your opponent isn’t playing Bonecrusher Giant for some odd reason). Goblin Chainwhirler triggers Spectacle. Now, Bomat Courier adds a nice one-drop and source of card advantage to push the deck into the long game, even in the face of cards like Uro.

Now with Bomat Courier the Historic version looks something like this:

There are a few cards you can change but overall I like how simple and streamlined this version of Mono Red is. The wizard package includes all the relevant cards, throw in the good spectacle cards, Bonecrusher Giant for good measure, add a few Bomat Couriers, and voila! You have a Mono Red deck raring to go. Before I go into the sideboard guide and talk more about the card choices, I think it’s also important to go over some other red lists and important cards in the format and why you should or shouldn’t play them in my opinion.

Along with Bomat Courier we get a few new additions to red aggressive strategies in Historic.

Chandra is another hallmark of Mono Reds of Standard past that is a nice addition to these strategies. Similar in a way to Experimental Frenzy, Chandra is a versatile planeswalker that allows you to ‘draw’ an extra card each turn, remove a creature, or eventually tick up and ultimate to provide a game-ending emblem. I think it’s hard to discern whether Chandra or Frenzy is better, and ultimately I think it comes down to the type of Red deck you’re piloting. Experimental Frenzy is nice in the Mono Red mentioned above since if you hit a clump of spells on top of your deck, you can usually cast multiple in one turn if their mana cost is one or two. Additionally, you can cast cards like Light up the Stage and hold priority to cast the instant speed burn spells on top of your deck before exiling the other two cards. Frenzy is also better with cards like Steamkin, allowing you to cast multiple in a turn when you hit a clump of cheap cards. I feel like Chandra is a little better when your deck is filled with cards like Glorybringer or Goblin Chainwhirlers, usually more expensive cards that pack a punch as opposed to multiple cheap cards. Chandra also provides you an extra two mana can make for some explosive turns when you play something like a Hazoret and an Abrade.

I think this is one card people are going to overlook, although I’m not sure how much play it will realisticallys see. I played a few events with Mono Red in Pioneer right before the pandemic hit and Aethersphere Harvester was one of my go-to cards for the sideboard. Harvester is a decent attacker and blocker in the mirror, allowing you to also gain six life which is nothing to scoff at in a mirror match. With the rise of Aetherworks Marvel decks in Historic however, Red decks may be packing more copies of Arade, as well as Embereth Shieldbreaker, so Harvester might be more susceptible to removal. I do like that this card can block a Bonecrusher Giant, which is usually one of the biggest creatures in the mirror. Also in board stalls it can chip in for some extra damage as well. It may not be good enough to earn a sideboard slot but it’s something to keep in mind.

This is another card that saw some standard play back in its day, usually in the Mono Red or R/B vehicles decks with Scrapheap Scrounger and Heart of Kiran. With Pia you can pump the thopter token, an Aethersphere Harvester, or a Bomat Courier (and sacrifice it for an unblocked attack). I think three mana in Historic is definitely a pretty big investment, and cards like Rampaging Ferocidon, Goblin Chainwhirler, and Anax will take this slot instead. Pia is definitely one to keep an eye on though in case Scrapheap Scrounger or Heart of Kiran aggressive decks become popular.

This is another card that saw some standard play back in its day, usually in the Mono Red or R/B vehicles decks with Scrapheap Scrounger and Heart of Kiran. With Pia you can pump the thopter token, an Aethersphere Harvester, or a Bomat Courier (and sacrifice it for an unblocked attack). I think three mana in Historic is definitely a pretty big investment, and cards like Rampaging Ferocidon, Goblin Chainwhirler, and Anax will take this slot instead. Pia is definitely one to keep an eye on though in case Scrapheap Scrounger or Heart of Kiran aggressive decks become popular.

Kari Zev’s Expertise is another red card that saw sideboard play in Aether Revolt Standard. I think in Historic this actually has some play, being able to steal a big creature against B/W Boggles or an Aetherworks Marvel’d Ulamog, the Ceaseless Hunger. Probably a one or two-of at most if it any at all.

Kari Zev is another card that I think will see good amounts of play with Kaladesh Remastered. I don’t think Kari Zev fits into the list I mentioned above (maybe as a one of), but Kari Zev is the perfect match for Embercleave. With Bomat Courier (or any other one drop really), you can pump out an Embercleave on turn 3 with Kari Zev and Ragavan. Kari Zev will also fit in nicely with the non-burn decks playing copies of Castle Embereth over Ramunap Ruins.

You can also pump out multiple attackers for an early Embercleave with Burning Tree Emissary. I think this is still a good red deck but a worse Bomat Courier deck overall just because of how awkward it is to cast some of the cards in your hand. In the list I first mentioned you’re able to pump out spells pretty quickly since every card costs one or two mana, while in this version you might just get stuck with an awkward hand of Anax and Steamkins. Steamkin has the potential to go off but I think overall this list seems a little clunkier. I also feel in the mirror having access to Goblin Chainwhirler is a real decider. Also with the addition of Aetherworks Marvel into the format I feel like there will also be more artifact hate roaming around. You might get seriously blown out in the mirror by an Abrade if you Embercleave the wrong blocked creature.

All in all I want to test this version of the deck too. This list might end up being better and faster versus Aetherworks Marvel strategies with an unchecked Embercleave. I think time will tell how the format settles. However if Red ends up being the best deck (or at least in the top 3) it’ll be vital to value your card choices accordingly. The addition of Chandra, Torch of Defiance into these strategies may prompt people to start adding Chandra’s Defeat into their red sideboards as well.

Taking one last look at my original decklist I want to talk about a few more malleable parts of the deck.

I could see Grim Lavamancer being a little too slow in the maindeck and better for the grindy Mono Red mirrors. I also think the amount of artifact hate will depend entirely on how well Aetherworks Marvel decks perform although Abrade seems like a safe sideboard card being able to tag Embercleaves or Aethersphere Harvesters in the mirror. Chainwhirlers and Ferocidons are great against Goblins the mirror as well as other random creature strategies. Going forward I’m most interested in seeing if the best version of this deck is the Embercleave or wizard version. It’ll also be worth keeping an eye on Scrapheap Scrounger/Heart of Kiran/Chandra versions, but that’s a story for another time. As always, thank you so much for reading and I hope to catch you next time.

Which Mono Red cards from Kaladesh Remastered are you looking forward to playing with in Historic? Let me know!