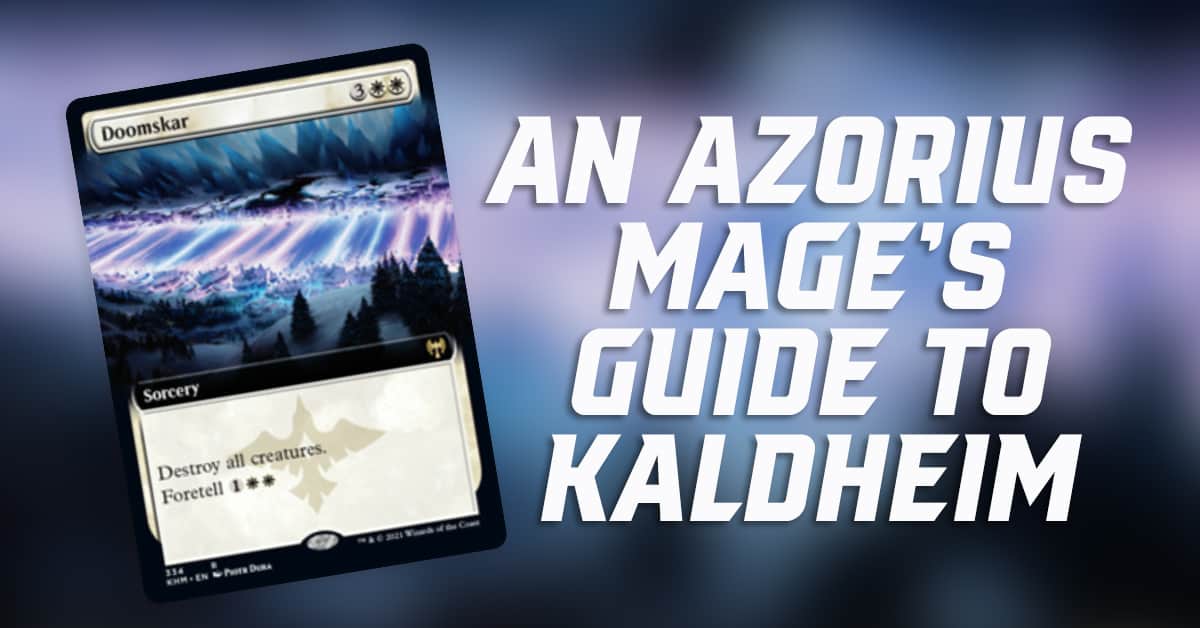 Friends, it’s that time of spoiler season – the time where I rant and rave about Azorius control decks (only to have my hopes and dreams shattered) and boy is Kaldheim full of new toys that would make any control mage excited. Even with the eventual ban of Uro, Omnath, and Escape to the Wilds, Azorius control/Yorion saw very little play in Zendikar Rising Standard. The issue? Creature decks. By sheer numbers Gruul and Mono Green Food dominated the Zendikar Rising Format, with Rogues coming in a nice third and sometimes arguably, second place.

While a couple of non-aggressive strategies popped up week by week, various Dimir Control, Esper Yorion, and Big Red Ugin decks, the format fell under the dominion of red and green beasts. It doesn’t take an expert to identify how powerful Green has been in recent years, especially in a format where it has three separate powerful engines: Trail of Crumbs, Edgewall Innkeeper, and The Great Henge. These three diverse threats, as well as a deck chock full of three mana 5/5s and multiple creatures with haste or invulnerability made it quite impossible for control strategies to really find their place in the format.

An issue that I see with recent Standards is that the answers never match up to the level of the threats that are presented. You can’t even wrath your opponent without them either keeping their even or odd creatures or drawing a card! The cheap interaction also fails to deal with some of the more potent threats. White, Blue, and Black do have powerful threats (Skyclave Apparition, Dream Trawler, and Ashiok to name a few) but the lack of interaction to deal with incredible threats is what truly prohibited these control decks from being, in my opinion, Tier 1.

However, that’s all about to change. Well, or so I hope. Ever since living through the horrors of Oko and Field of the Dead Standard I’ve always been hesitant to call a control deck “good.” Honestly, the last time I really thought a control deck was one of the better decks in Standard was probably Esper Control in the summer of 2019, where we had access to both Teferies and Kaya’s Oath and Wrath. Azorius Control did seem like a contender for best deck back during the early early days of Theros: Beyond Death Standard, but that was way before people realized Uro was you know, Uro. Eldraine has definitely warped Standard to the point where threats matter more than the answers.

That being said, Kaldheim does propose some promising answers for control mages. I may have shed a tear when I first read this card:

This might be the best white wrath ever printed. No, seriously. Doomskar gives me life. A modal wrath that’s all upside is not what I expected to see on the spoiler but I am glad it’s there. In my previous article, I sketched out an idea for what I thought a Azorius Foretell deck might look like. The one missing ingredient, I concluded, was a Foretell wrath, or at least a great piece of removal. Foretell has potential as a mechanic because of the element of surprise. Will your opponent play their creature into your Saw it Coming, or do they think it’s a Behold the Multiverse? Maybe it’s an Alrund’s Epiphany, and they have time anyway so they choose to play out the card regardless. With Doomskar we now get another unique piece of removal that can seriously put your opponent in a bind. You can find ways to trip them up, putting the pressure all on them to decide how to sequence, letting you react accordingly. A turn three wrath also has its implications in current standard, being able to shut down the possibility of a turn four Embercleave or turn four Great Henge, which I’ve honestly been beaten by multiple times. A turn two Foretold Doomskar into Niko Defies Destiny allows on turn four for a one(!!!) mana wrath in addition to giving you three leftover mana to perhaps lay down another Niko Defies Destiny, or perhaps Niko themself. Did I mention you get the wrath back in your hand the following turn? In this business that’s what we like to call V-A-L-U-E. This card is incredibly pushed but hey at least we have at least one good answer in standard.

Can you tell I’m excited? Let’s continue. Kaldheim has certainly provided us with the tools for a potential competitive Azorius control deck. Question is how we put those pieces of the puzzle together. The easiest go-to Azorius builds are 60-card Foretell and 80-card Yorion. Let’s look at some sample builds.

It’s hard to pinpoint the exact numbers for each card in this list, but that comes with playtesting and seeing how the format will settle out. I do think this deck is quite solid, however. Niko Defies Destiny is the glue that holds together some of the more important sequencing, allowing you to double spell on the next turn if you pay its initial three mana cost the turn prior. I’m pairing this saga with Strategic Planning, but I’m sure Omen of the Sea has other potentially more important implications (Dream Trawler trigger, Niko -2, sacrificing itself to Doom Foretold). While I do want to include copies of Alrund’s Epiphany, since you can cast it in some cases on turn four and it can put in work with Dream Trawler, you don’t want to get overloaded with them early on in the game, which is why I’m playing two copies for now. It’s also hard to squeeze in every good UW card since we want to be wary of the Foretell package. Skyclave Apparition I think is a must maindeck just to have a diverse answer to cards like Edgewall Innkeeper, Doom Foretold, Anax, and Mazemind Tome. The turn two slot will most likely be taken up by Foretelling a card, in some cases a wrath, which is why my Glass Caskets are hanging out in my sideboard for now.

Overall I think this deck is set up to have game vs the non-blue decks of the format. This deck will most likely struggle against Rogues and Dimir Control, which is why I’m packing at least five counterspells in the board alongside some Mazemind Tomes. I could see four Dispute being the number you want if the metagame prompts it.

Next, let’s try Azorius Yorion with the same Foretell package.

While I do like the idea of consistently drawing Doomskar and Niko Defies Destiny in my opening sevens, Yorion might be the correct way to go here. There’s not much of a difference in these decks except for the fact you get more value off your Yorion if you can flicker a couple sagas and a Tome or an Omen. I do like being able to fit in all of my favorite control cards into one package with a Companion to boot. The Foretell cards are pretty powerful on their own however. I can see this deck losing due to its inconsistencies.

Kaldheim gives control decks new areas to explore in the upcoming Standard season. While my focus is aimed at Azorius, there are some other cards and strategies to consider.

Battle Mammoth is not a control card by any means, as you wouldn’t want to run this into your own Doomskar. However, Mammoth might be a good target to pair with Niko Defies Destiny, allowing you to play a 6/5 on turn four with an additional two mana to foretell another card. Mammoth also gives you some insurance for your permanents. The main issue with Mammoth is its mana cost. GG is definitely not the easiest to cast in a deck that wants to be potentially base UW, but access to the triomes, all ten pathways, and all ten temples might allow for it. It would be a no brainer to build a bant Uro deck, but we’ll have to be a bit more creative. The only other Foretel card that’s marginally playable in green is Sarulf’s Packmate, four mana 3/3 that draws a card with an alternate casting cost ain’t the worst deal in the world.

Aside from Azorius and Foretell shenanigans there are a few cards I also want to briefly touch on.

Blood on the Snow is a tempting wrath, one that harkens back memories of one of my favorite wraths of all time, Descend Upon the Sinful. Blood on the Snow requires a hefty amount of snow lands in your deck, but the payoff is a tempo-wrath that can surely turn the tables. It also instant loops with Shipwreck Dowser – another possibility to consider. Blood on the Snow could be the top end to a potential snow control deck, or UB control deck, but it may be too expensive for the current standard. Although the Shipwreck Dowser plan might be the perfect way to stop Gruul and Mono Green Food in their tracks.

Tundra Fumarole is another interesting card that could slot into Mono Red or Boros Ugin strategies. The dream with this card is to probably cast it and get a free Mazemind Tome or Solemn Simulacrum on turn four? Sorcery four damage is a little too slow for my liking but it seems like a cool way to double spell in those colorless Ugin decks.

Crippling Fear is cool tech vs Elves or Mono Red, but not killing Lovestruck Beast is a serious downside to playing it.

Disdainful Stroke is another nice reprint from the set that will see lots of play. In the current format it’s hard to play two mana counterspells due to the diverse amount of threats in the format. You can’t Essence Scatter or Negate both a Feasting Troll King and a Great Henge. You also can’t Essence Scatter or Negate a Yorion and Doom Foretold. Disdainful Stroke gives back some flexibility to control decks. A sideboard staple for sure.

King Narfi’s Betrayal seems like great control mirror tech for UB Yorion. Resolving this on turn three allows you to reanimate your own Solemn Simulacrum or Atris on turn four while being able to cast one of your opponent’s cards on turn five. However, if this card misses it’s a pretty bad deal – this card seems much better for Rogues than a control deck.

Kaldheim makes me hopeful for the next Standard cycle. While there were a variety of viable decks in this current Standard, the creature decks dominated, pushing control decks out of the picture. However, the addition of various Azorius Foretell cards, the arrival of an extremely powerful white wrath, and various other control decks make the case for a control comeback.