An Ultimate Guide to Drafting Maestros in New Capenna 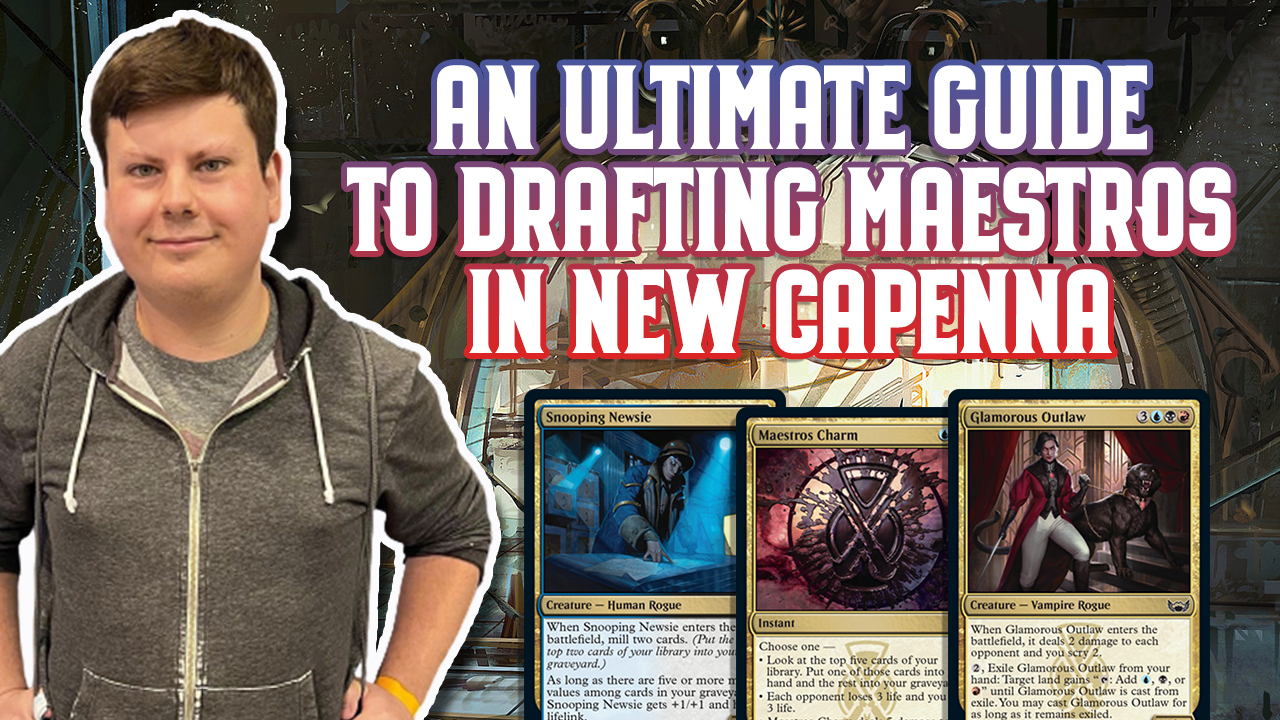 Let’s face it – we can’t argue with the fact that Azorius and Bant are the best color combinations in Streets of New Capenna draft. With pushed commons such as Angelic Overseer and Raffine’s Informant, as well as multiple cards to out-tempo the opponent, such as Celestial Regulator, these decks can out-perform any three-color combo. It’s not just Blue decks either. With White being the most powerful color in the format, there are various other White-based aggressive decks, most notably Selesnya citizens with Civil Servant, performing well in the format. What does this mean for a draft environment that was first introduced as a tri-colored format?

By far my favorite color combination to draft in Streets of New Capenna is Dimir/Grixis. While I’ve certainly had my fair share of Blue-White or Brokers-based decks, I’ve found that it’s harder to draft those colors with other people at your table in the know. While you can certainly leverage your first couple of picks, I’ve found that in the middle of the first pack it’s harder to find some of the stronger commons, such as Raffine’s Informant, Inspiring Overseer, and Echo Inspector. With these cards being taken higher on average than other commons and uncommons, it’s worth noting what other decks you should try to be in if people at your table are prioritizing the White, Blue, and Green cards.

I’ve greatly enjoyed playing Blue-Black-based decks in this format. Before diving into the nitty-gritty here are a couple of reasons why:

One thing I love about drafting these Dimir-based Maestros decks is the sheer amount of removal that’s in those colors. Here are the ones I look out for in a given draft:

I’ve won multiple games in this format by milling someone out with Deal Gone Bad. Since you want the games to go longer on average as a Dimir deck, Deal Gone Bad will accelerate the clock on your opponent’s library, especially if they’re drawing cards with Connive or Overseers. I like the DGB can take out shield creatures as well. Raffine’s Silencer and Night Clubber are also excellent ways to keep your opponent’s shield creatures in check. Clubber has granted me a two-for-one in a number of occasions and I pick it pretty highly.

Sleep with the Fishes isn’t my favorite removal spell in this format, since things can get sacrificed pretty easily, but if you have a deck that relies on some Casualty spells it’s worth noting the 1/1 fish token can be good fodder. Whack and Charm are just solid removal spells in general, especially with White’s popularity. Witness Protection isn’t my favorite removal spell, but it’s useful to mill over to get the five mana values in your graveyard – more info on that later.

While drafting these decks isn’t the most complicated thing in the world, I do think the better players will pilot/draft these decks more competently. You have to be super mindful of multiple aspects about your deck during drafting. It’s important to know when to take removal spells, creatures, and cards to fill your different mana value slots.

Going back to my previous point in this article, on average players will most likely be prioritizing Brokers-related cards early on. I’ve found that I’ve been able to go into Dimir/Maestros mid/late-pack one when cards like Tainted Indulgence, Snooping Newsie, and Syndicate Infiltrator have wheeled. Usually Snooping Newsie is a big sign that no one wants to be in this color combination. I’ve even had drafts where I’ve gotten 4 Newsies by the end of pack two! I think for new and average players drafting these decks is a little more daunting than drafting Cabaretti/Brokers decks. That being said I’d keep on the look out in pack one for these cards.

Here are the cards I aim to pick up during the draft that act as the core of my decks:

If you end up drafting this deck there are a couple of key things to keep in mind.

Newsie is the most important card in this deck. Since the U/B-based decks are less aggressive, you’re going to be taking more hits from aggressive decks in the early game. Your ultimate goal is to manage the board, run your opponent out of cards, and then start snowballing advantage in your favor. Newsie is the perfect card for that type of game plan.

Since you won’t be the beatdown in an average game, Newsie helps you gain back the life lost early on. It also helps facilitate getting to five different mana values in your graveyard. I’d value this card pretty highly since it acts as the basis of this strategy.

The next thing to keep in mind when drafting this archetype is knowing what different mana values are in your deck. On average, your deck will have multiple 2, 3, and 4 drops. While 0 drops are easy to obtain if you draft a couple of sacrifice lands (and you’ll mill them often off cards like Snooping Newsie), 1, 5, and 6-7 drops will be harder to get in the graveyard on average. You don’t want an amass of these cards either, as there aren’t a ton of impactful one-drops and your draft deck shouldn’t have too many high-cost cards. Here are the important ones to look out for.

Girder Goons is just a solid card on rate. I love creatures that have some value to them after they die in combat, and if you need to get a five-drop in your graveyard you can blitz this in for some damage and a card to turn on your Newsies.

While I don’t want more than one copy of this card on average, it’s a pretty useful creature. Lackey is perfect fodder for your Casualty cards, notably Dig up the Body and Grisly Sigil. It’s the perfect card to also ditch to a Connive trigger from a card like Echo Inspector. It’s also great to mill off a Snooping Newsie or Dig up the Body, and the unblockable token can even close out some games where you have the board locked down. The first copy of this card is important as fodder, a nice mill target, and a one-drop to count to your five different mana values.

Speaking of one drops, Sigil is one of my favorite removal spells. Going off of my last point, this card combos great with cards like Expendable Lackey. It’s a nice way to remove most threats from play while also gaining back life to help stabilize you. This is another card I’m picking highly due to its utility and mana value.

Even in draft pods where Dimir is usually open, I still rarely have straight Dimir decks. At some point in the draft I’ll take a solid red uncommon or removal spell, but I’m conscious of not leaning too heavy into the red splash. Because you want to be able to play cards like Snooping Newsie on turn two, you really don’t want to be playing too many red cards. I try to avoid cards that are better in Rakdos Sacrifice decks, such as Body Dropper and Light ‘Em Up in this types of decks.

One red card that I’m happy to pick up at most points in the draft is Pugnacious Pugilist. This card is a psuedo-Girder Goons that is relatively easy to blitz. I’d also take Corpse Appraiser pretty highly. It’s a solid followup to a Snooping Newsie and just a solid card on rate.

Usually with Red cards I try and only include cards that have one Red mana symbol in the casting cost. Since you want to prioritize playing cards like Snooping on turn two I try and keep the Red cards to things I want to cast later on in the game or that I’m not relying on casting early. Here are some examples:

This may be one of the most important lessons about playing this deck. Your library count matters! If you’re playing multiple copies of Snooping Newsie, Dig Up the Body, Maestros Initiate, or just anything that draws cards (Blitz, Connive) you need to be cautious about playing 40 cards. I’ve played upwards of 45 cards in these types of decks. While this may be a controversial opinion, I’ve watched opponents first hand lose to playing the classic 40 cards while they deal 10+ deck damage to themselves. You can’t expect to kill your opponent as a midrange deck when your starting library is theoretically less than 20 cards.

I also say this because there are times where you want flexibility. If you rebuy a Snooping Newsie that died earlier in the game with Dig up the Body and replay it, that’s already 6 deck damage (without even Casualting the Dig up the Body). There are times where you have an aggressive draw with multiple Snooping Newsies where you’ll want to mill yourself with Deal Gone Bad or Maestros Charm. While you don’t need to play 45 cards in all instances you should be playing upwards of 18 lands and 25 spells when you’re playing multiple cards that deal deck damage, especially if you have ways of casting them multiple times in a given game.

If you like control/midrange strategies then I highly recommend giving this archetype a go. While you can’t expect to draft this deck at every FNM or Arena draft you do, I’ve found quite often that players are steering away from this archetype. These decks reward skill and critical thinking, and while they may not have as high 17lands win % as the Brokers decks, they’re way more appealing when your table is fighting for Brokers cards.

I hope you found this article helpful, happy self-milling!