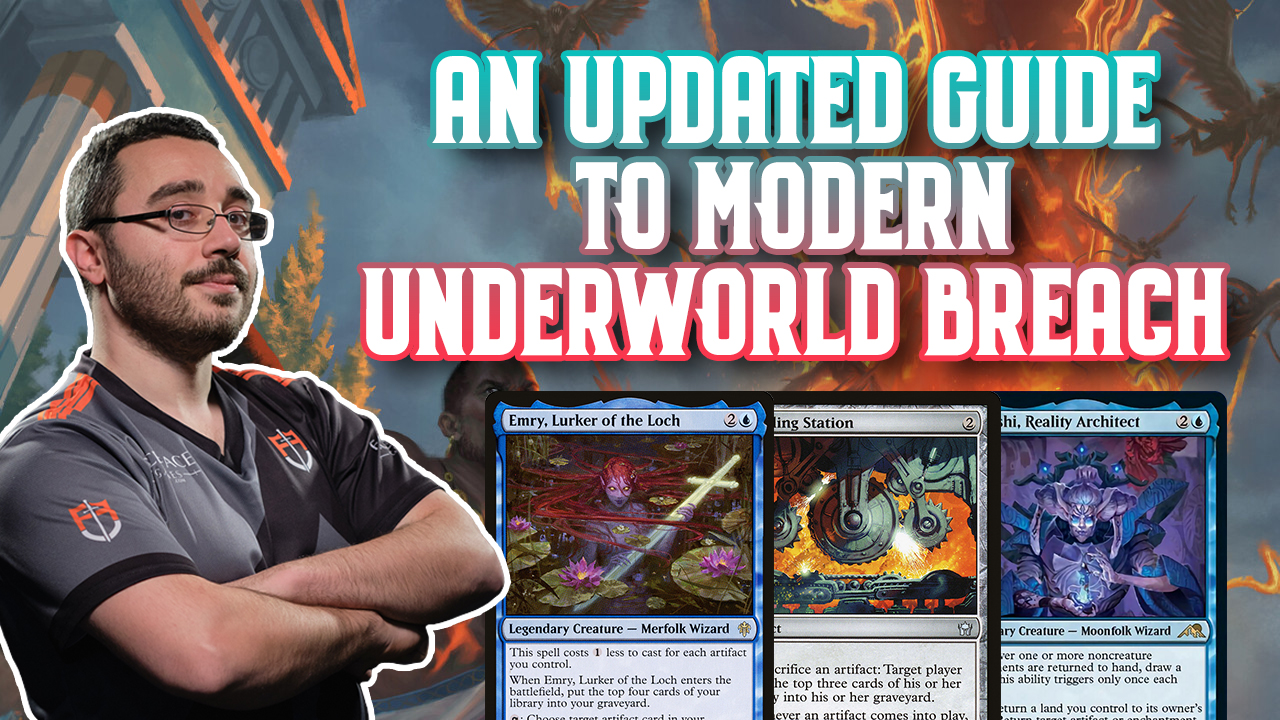 Underworld Breach is underrated and probably not listed amongst the Tier 1 decks in Modern. It is this author’s humble opinion however, that they are all wrong! I do think this is one of the trickier decks to pilot. The winning lines can be hard to see. Some of the moves involve a fair amount of risk as well. You can sometimes just be cold to a Karn, The Great Creator. However, sometimes you just win on turn two with not a care in the world.

Let’s take a look at the list before jumping into specifics:

Okay now that’s out of the way. First let’s make sure everyone understands the combo: Grinding Station mills you for three cards when you target yourself. Underworld Breach lets you exile three cards from your graveyard to cast a spell. In conjunction with a 0-mana artifact, you are able to continually cast, then sac, and recast either a Mox Amber or a Mishra’s Bauble. You do this until you mill your whole library and cast a Thassa’s Oracle for the win.

That was the simple way of putting it. Now to break this deck down, understand that there are a myriad of combinations to help ensure you win before your opponent has the time to properly kill you. Mox Amber being an accelerant is key to the deck’s design. Almost all the creatures in this deck are legendary. This enables Mox Amber and makes Otawara, Soaring City cheaper to channel. The sickest turn one play goes like this: Mox Amber into Spirebluff Canal into Ragavan into Springleaf Drum into Emry. This start is incredibly busted if you’re fortunate enough to mill a Grinding Station off of Emry. Any Underworld Breach + land are a turn two kill. It may seem slim but I’ve pulled it off a number of times.

The turn three kills are much more common and consistent. Really it involves casting a Grinding Station on turn two, then on turn three casting a Underworld Breach with any creature or having an artifact that costs zero mana on the table. You also need four cards in your graveyard or two zero mana artifacts. Let me explain in further detail because I am sure this isn’t the easiest to understand if you’ve never played the deck before.

Turn one, say you play land and a Mishra’s Bauble. Turn two you play Grinding Station and a land. Turn three you play Underworld Breach for two mana and still need one mana leftover to play a creature. That creature can either be Ragavan or Emry since both can conceivably be cast for one mana. The artifact that costs zero lets you begin the recurring mill process on yourself. Once you’ve milled a Ragavan, if you do not have the additional artifact, you’ll spend three of the four cards in the graveyard to cast Ragavan. Continue milling yourself with Mishra’s Bauble if it’s not a Mox Amber until you’ve milled a Mox Amber. Then cast Mox Amber and begin floating mana as you recur it through your combo chain. You really only need two Red mana to cast Grapeshot once your spell count reaches around 20 or whatever their life total is.

The reason you need four cards in the graveyard is so you do not mill Grapeshot and are forced to mill it away. However, sometimes you’ll want to take the risk that you’ll hit what you need before you hit a Grapeshot if you know you won’t live another turn. If you have an additional artifact played on turn one, such as Aether Spellbomb or a second Mishra’s Bauble, then the combo process gets a lot easier. This is because you can self-mill more with Grinding Station and be more selective about what you have to cast.

I know some are probably thinking they need to re-read that last part to understand it all. Well, I have bad news, it’s going to get even more complicated! Okay so there’s a way to win without a Grinding Station. Emry mills four cards and often costs one mana. If you have Mox Amber and Emry, both of which are Legendary (relevant so you have a way to put them back into the graveyard), then in theory it should cost you two cards in the graveyard and technically no mana in order to start chain milling these two cards. If you do the math of how many cards are in the graveyard versus left in your library, you can figure out if you have enough to get in Thassa’s Oracle range or even Grapeshot range of winning. This is going to be something you want to get quick at calculating if you want to try and play this deck even close to optimally. And no one really plays this deck optimally, the math is insane! It’s part of what I love about it, really.

Just when you thought you were starting to see all the avenues, I’m going to tell you there’s a whole lot more to the deck. Mox Amber with Underworld Breach can generate a lot of mana. With an Emry on the Table and another in hand or in the graveyard, you can burn excess mana to keep replaying Emry in order to self-mill four cards. If you hit a second Mox Amber and the graveyard is big enough, you can start to mill as stated before at no mana cost and instead graveyard cost. Generally this is with the goal of finding the Grinding Station to perform the basic combo. Keep in mind some games you’ll cycle enough times or have enough mana with two Mox Ambers to cast Grapeshot, and then cast it again thanks to Underworld Breach for lethal. Heck, there have even been games where a Ragavan and two Mox Ambers and a Breach have allowed for lethal turns without anything else but a filled graveyard.

If your brain hasn’t been completely filled yet, here are some more lines to be aware of. Tameshi, Reality Architect has a lot of text. Besides being a draw engine, Tameshi also enables Mox Amber to tap for blue, which is generally the most important color. In conjunction with Urza’s Saga in the Graveyard, you can net a free card at no negative cost of land thanks to bringing Urza’s Saga directly back to play. This usually enables long game plans in grindier matchups where eventually you have an unstoppable amount of large constructs that beat down for lethal. Then, there’s other games where you’ll just use Tameshi to bring back Underworld Breach and begin combo’ing the normal boring way.

For me, the most fun I have with this deck is finding new ways to win. Whether that’s by using Emry and Engineered Explosives to lock out a Hammer Time opponent, or even just taking out the combo post board entirely and being a beatdown/control deck. The great part is that the opponent still has to play around the combo. Some games I even enjoy just casting an Underworld Breach with none of the components after I’ve had a lengthy game of attrition with my opponent. Then I cast and use Mishra’s Bauble and then repeat three to five times, drawing a brand-new hand on the next turn and winning the long game.

I’ve even had games where I had resolved a couple Grinding Stations, used Urza’s Saga to make enough golems but couldn’t attack for the win. Then started to mill out my opponent with Grinding Stations.  There’s a super narrow line that sometimes comes up, where you will play a Grinding Station on Turn two, on turn three you won’t have another land but you’ll have Underworld Breach and a 0-drop. Then you’ll start the combo of milling yourself out knowing you can’t win that turn, but maybe you have Thassa’s Oracle already in hand. Knowing your opponent can’t stop it on the next turn, you let them have one more turn before untapping and subsequently winning with just a Thassa’s Oracle play for your turn.

Alright I think I’ve said enough for now, but I promise you there’s even more to explore with this deck. Learn your Urza’s Saga lines, prepare for Dress Down, get your sideboarding down well because lots of people will mess that up with this deck. The flex spots aren’t always as flexible as they may appear. Help me put this deck on the map as it most definitely deserves to be!