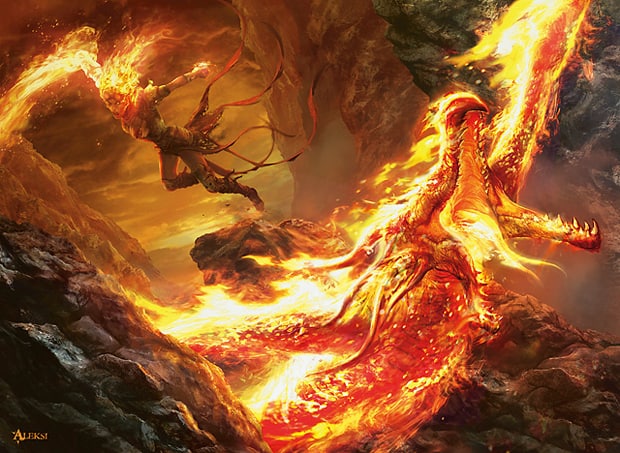 I would like to start this article by apologizing that I am not as good at puns as LSV, though if you read his M12 review articles, thus far, he seems to have lost his pun-ch. Sorry, had to try one more. Now to decipher the title, this article is about my sealed experience with M12 and my impression of the format, which happened at a Game Day event, which occurred on the release date of M12, so Pre-Game Day but post Prerelease.

To start, this was the pool that I opened with my six packs (the [Card]Monomania[/Card] was the foil rare I opened unfortunately and I was fortunate not to open any non-basic lands).

Anything happen to catch your eye?

Turns out it caught mine too.

All six non-foil rares from the pool were either Black or Red rares and each could be considered a bomb rare. Now, two in particular are much better than the rest; [Card]Grave Titan[/Card] and [Card]Inferno Titan[/Card] with the [Card]Vengeful Pharaoh[/Card] coming in third. Looking over the pool I was able to whittle down all of the unplayable cards or cards that just were not good enough to make the cut in this deck and arrived at the following deck:

I was faced with the choice of either actually putting the time into constructively building a three color deck which had some synergy and a game plan or I could just play Bombs. This decision took approximately four seconds as I remembered all of the past Prerelease where my losses would come against decks who just played bombs and quickly outclassed my deck synergy, I’m looking at you Metalcraft.

I won’t bore you with the details but I went 3-1, if you don’t want a recap skip the next four mini paragraphs.

Round One, Game One I played pinger, pinger, [Card]Sorin’s Vengeance[/Card] and won. Game Two I kept Six Mountains and [Card]Inferno Titan[/Card] and won, turns out Titan is good.

Round Three, Game One I played [Card]Furyborn Hellkite[/Card] with Bloodthirst and he scooped. Game Two we played Land-Go until turn six when I went [Card]Inferno Titan[/Card], he went [Card]Carnage Wurm[/Card], I attacked with Titan, he declined to block and I went Hellkite and he went scoop.

Next turn he attacked with his dude, I activated [Card]Vengeful Pharaoh[/Card] and he didn’t have a last counter or bounce spell for the Pharaoh or Goblin Pinger I later cast. Game Two, I kept a two lander and didn’t draw another land but was able to bin a Pharaoh early. He told me he boarded into the aggro plan and attacked with a Pharaoh in the bin and activated to kill his guy. Next turn I again bin-ed the Pharaoh but this time he refused to attack and instead built up a “sea of dudes”. Finally I got to six, cast Titan and wiped his board before casting Hellkite, with Bloodthirst, which he attempted to [Card]Doom Blade[/Card], so I used [Card]Fling[/Card].

An interesting point, which he did not pick up is, had he continued to attack with his creatures at one point I would either lose by continuously binning the Pharaoh as it is not a may ability or I would have had to discard something else in hopes of drawing lands. He missed out on that point and because he didn’t attack I eventually got there.

That performance got me eight packs and landed me in fourth, one spot behind KYT. KYT as well opened two bomb rares in [Card]Gideon’s Avenger[/Card] and [Card]Angelic Destiny[/Card] while having a much more cohesive deck, which he piloted to a 4-0 record and ten packs if memory serves correctly.

After playing a little with the set, my initial impression still seems to stand pat, the set is terrible. The appeal of Scars of Mirrodin was that even with a bomb rare there was still a certain synergy to be had among the cards and the sealed format rewarded deck building just as much as opening bomb rares. While that may have been a product of being an artifact set where color restriction could be eased as Artifacts were usually a predominant part of any deck, we now return to more color balanced set and some problems.

If your name is Chapin or Kibler or Random Pro, your deck building will still be able to prevail without any bombs and you won’t be reading this article. Unfortunately, the rest of us do not possess such deck building prowess which presents a significant problem. How can this be rectified, you should probably go read the Pro’s article for pinpoint lesson. As for general approach you can try following a similar approach to mine. After cracking packs there are always loads of commons and uncommons which have been discarded, so I take a random handful and build a deck and then another random handful and build a deck. And test and try to find what works best.

My reasoning is similar to the one MaRo once gave here, in the end commons will fill the largest part of your deck and uncommons will be next and if you can’t figure out which commons should and shouldn’t be in a deck, you will have immense trouble building decks which can compete with any bomb your opponent is able to drop.

As for general deck building tips, I’ll list them as point form for easier viewing.
• Blue is best used for delaying your opponent and “cycling”. I’m not a fan of Blue creatures in general. The occasional one would be alright, though they must be supported by cards like [Card]Divination[/Card] or [Card]Frost Breath[/Card].
• Counter Spells are best left in the sideboard as more often your opponent will play small dudes, which you won’t want to waste a counter on until it is too late. (My match being the exception)
• Bloodthirst guys are awesome. The Green ones are probably the weakest, while the Red ones are probably strongest as they have more enablers and have better abilities than Lifelink; First Strike and Pseudo-“Unblockability” are powerful effects.
• You need Dinos to justify playing green. While mana dorks and special effects like [Card]Jade Mage[/Card] are fine, without the big Dinos in support, Green loses a lot of Reach, pun intended.
• I have yet to play White. I know its not strategy but the White cards I saw only seem to prevent a tide of dudes while not really having a counterpunch strategy unless you happen to have a White bomb. [Card]Peregrine Griffin[/Card] however is a nice card.
• The Artifacts in the set are underrated. You don’t want to be playing the life gainers or [Card]Rusted Sentinel[/Card] but outside of those each one would be justifiable should you wish to include it in the deck.

This past weekend I also happen to start drafting so that should I manage to grind into Nationals I will have my draft practice ready. In both drafts it seemed the tables turned as many of the bombs that were drafted, were relegated to sideboard cards and in some cases unplayable in the draftee’s deck. There was a further premium on removal spells and any card which could help you take on the control role as the format is very much geared towards an aggro strategy.

At this point, I’m still not completely comfortable with the format and still need a decent amount of practice until I am completely confident in my draft assessment. I will recommend finding any draft videos from Pros or decent grinders you can and listen to their comments as those are the best tools at your disposable for improving your game, even better than memorizing every available article.

I’ve left LSV behind and am now copying Chapin with some rhymes!

Actually I wanted to talk about a situation that happened to me, this past weekend. I was playing in a GPT for Pittsburgh and the format was Standard. It was round two with my opponent and me going to game three and the winner being able to draw three times to make top 8, it was a very small GPT.

The situation was I had three lands in play and two [Card]Sphere of the Suns[/Card] which I placed next to my lands, as they produce mana and it is how I prefer having the board set up. Its my opponent’s turn and he knows if I draw an Island I can combo off next turn, for those wondering, it’s not Exarch Twin combo, its another combo deck of my own creation. So my opponent looks over at my lands and uses his [Card]Tectonic Edge[/Card] to destroy one of my dual lands in play. I immediately bin the land he targets and he passes the turn.

On my turn I draw my card for the turn which is an Island and go to play it, only to look down and realize, I only have two lands in play so he could not activate his Tectonic. Immediately I call the judge, who comes over and rules that it is a failure to maintain game state, warnings each and the game proceeds as normal. This situation is not ideal for me as instead of comboing off and winning, I pass the turn, don’t get another land and lose.

The guy I was playing is about as honest as they come and was sincere in not realizing he could not have activated his land, which was further understandable by the way I stacked my lands and Spheres.

So what did I do?

See as much as there were some who believed it might have been my opponent’s fault I refuse to believe any part of that. A key aspect to Magic is avoiding misplays but also being aware of the game state at all times. I made a mistake and it cost me a guaranteed seat in the Top 8.

So what did I do?

I sat down for my next matches, leaned back in my chair as I always do and proceeded with Magic as usual. The judge, after a review, later admitted that he made a mistake in the ruling and that the game should have been “rewinded” to the point of the mistake which was the previous turn, which meant I would have won the game.

In this case some would rage, whether actually or sarcastically, some would call for an appeal and others would do a multitude of other things because they believe they were wronged, they should have won the game and blah blah. But here is the thing, the misplay was a creation of my mistake and my mistake alone. It’s not up to my opponent or the judge to make sure I win, it’s up to me.

Some would view this as unfair but I whole heartedly believe that I deserve that loss because it is my responsibility to be aware of the situation and my play, which involves my awareness and was not where it should have been, I inevitably made a mistake which cost me a win and guaranteed Top 8 spot.

With that, it is my responsibility to improve and grow as a player and ultimately reach a level where that does not happen to me again. I may have labeled the section as Bad Beats and Sad Defeats but this situation is neither. So remember to everyone the next time something happens which has a negative influence on you, brush it off and let it go because what you won’t realize is that while you may be annoyed over that one play, you should really be annoyed over the misplays you will make because of letting your feelings influence your play.

There’s no point putting yourself at a competitive disadvantage for something you can’t change.

If you have suggestions for improving or changing my Sealed Pool let me know, I’m intrigued by what others would do and until next time: Have Fun Playing Magic!