Attacking the Pioneer Metagame with Fires of Invention 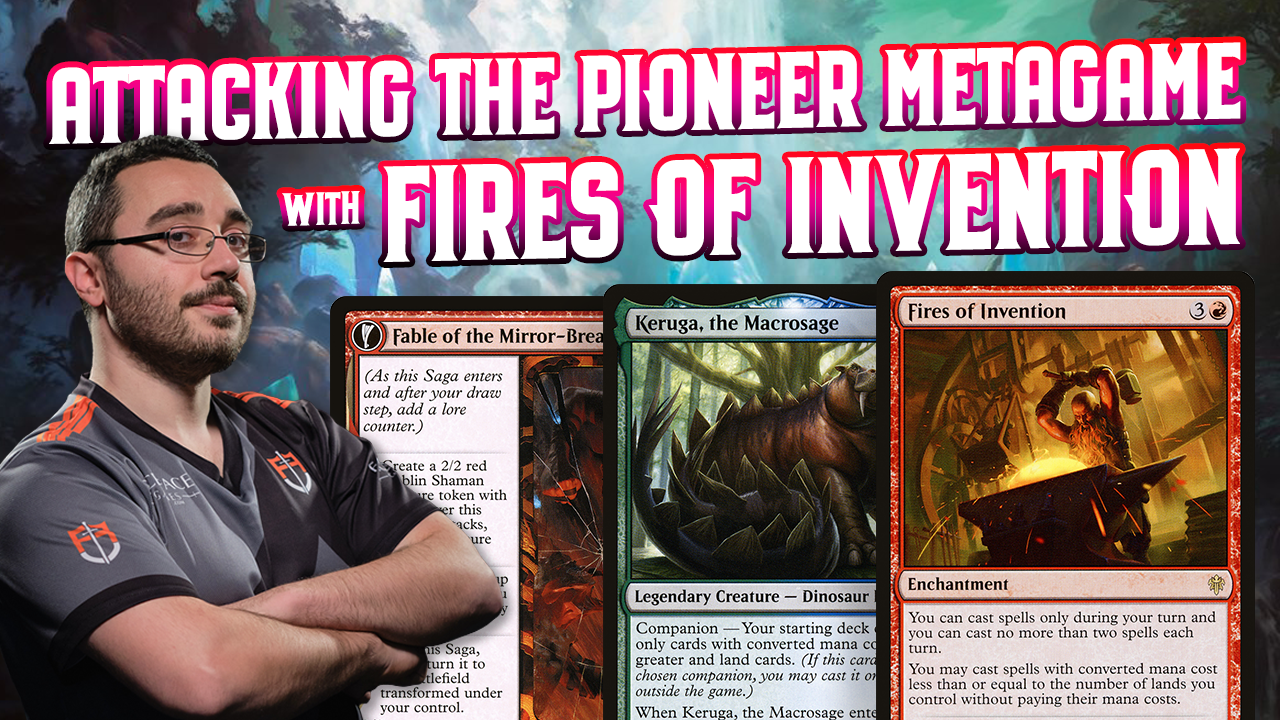 People often waffle back and forth between these decks and a few others, but the largest majority seems to feel that Rakdos is the place to be. To combat Rakdos Midrange people often turn to cards that are difficult to answer from these colors traditionally. Creatures with Indestructible or Enchantments are typically where people end up. Today we are going to talk about specifically Fires of Invention, as it may be the best card/deck for combatting the Rakdos menace.

When I did a deep dive into Fires decks on the internet I was fortunate enough to stumble upon a familiar name of someone I deeply respect. Pascal Maynard played this list to a 5-0 in a Mtgo league pretty recently and it’s as good a starting point as any.


For those unfamiliar with the deck, the goal is to play out a Fires of Invention and then play big beefy creatures with abilities you can float your free mana into. Sometimes this involves killing your opponent in one big swing and seizing the element of surprise. Kenrith and Cavalier are specifically those cards that attack in for large amounts of hasty damage.

The difference between Pascal’s and other lists is primarily the inclusion of Sphinx of Foresight.

This card ensures more hands that will materialize a Fires of Invention in play by turn four. In addition, it is not a bad follow up play when the Fires of Invention resolves. Notable downsides to this tech are just like with Leylines. If you do not start with them in the opening hand, then you have an extremely average card in your deck. The biggest upside to playing these three-color lists without the landfall mechanic is that we do not need to include Fabled Passage and harm the manabase any more than we must.

Perhaps more stock lists do not run Sphinx of Foresight and instead opt to play four color mana bases. In doing so, they include Omnath, Locus of Creation.

Omnath can act as a secondary method for adding a large amount of additional mana to the mix. This can allow the Keruga, the Macrosage companion to become an additional effective weapon for pulling ahead. Another card the four-color lists optimize is Leyline Binding.

This card generally will be a two-mana “Oblivion Ring” with flash. This is of course a big upgrade on this traditional card, whereas this deck often requires spending three mana to cast, except when we draw off color mana base cards.


There are a few important tips to learn if you’re just picking this deck up for the first time. First, you will need to mulligan a fair bit. Unlike with other decks, you’ll be looking to make a good land drop on turn one, interact on turns two and three, then play a powerful progressive spell on turn four. I would say on average you keep hands that are short one of these things very easily. When you are missing two of them then you need to strongly consider taking a mulligan. Any more than that and you’ll know a mulligan is necessary if you want to win that game. Many beginner Fires players keep hands with not enough impact.

For sideboarding, the most important thing I can tell you is to beware of your casting costs. If you cut a chunk of the deck from one area, you better be looking at filling those vacancies with your sideboard slots. Otherwise, you’ll be less consistent and have more awkward draws. If you are in a field of Spirits players, probably don’t bring this deck to battle. This deck preys on midrange strategies like Rakdos most of all.

I would rate the skill level on this deck to be quite high. I would not advise someone pick up this deck who’s just starting out in the format. It may appear simple on the surface, but the choices made can drastically alter the outcome of matches. If you are playing this deck, it’s likely you have a pet card or two in your build. These decks can generally support playing pet cards and for that reason people who like a bit of chaos and fun are generally drawn to a deck like this. I’ll be honest, it feels like you are doing broken stuff when you cast spells without tapping mana. So, if you’re into that, start building this deck and see how it goes.

Thanks for tuning in, catch you soon!