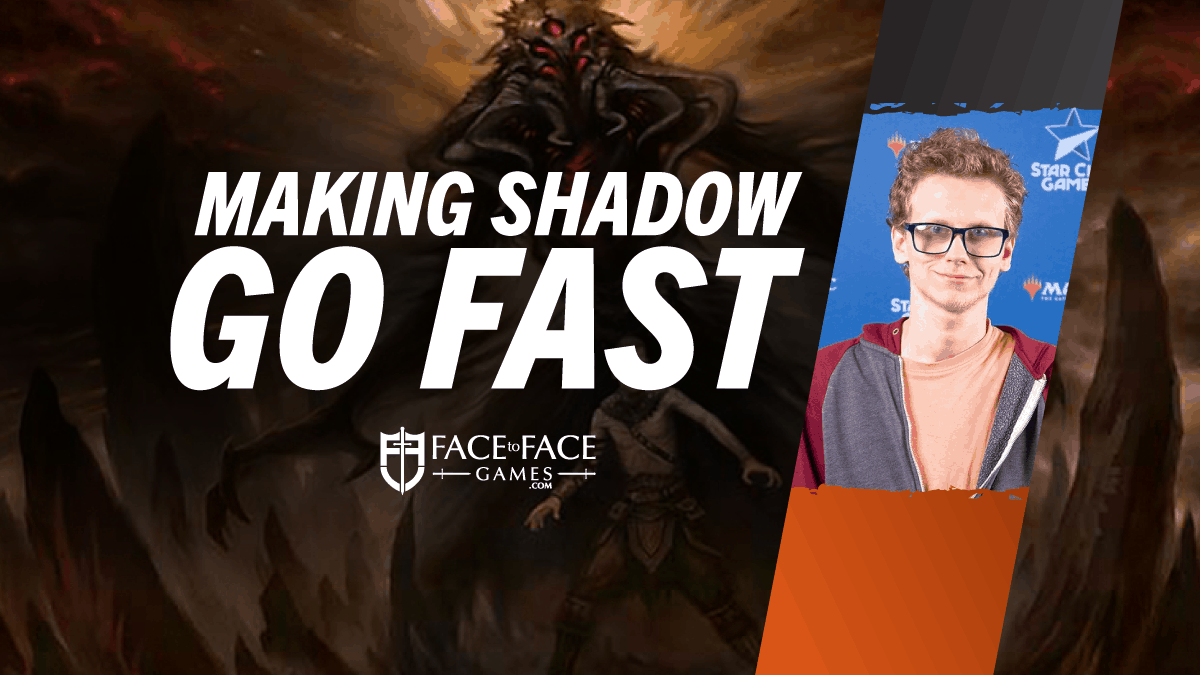 Metagaming in Modern is a tricky proposition.

The format’s tier one contains only a handful of decks at any given time, each of which has a favourable matchup against the rest of the field overall but still has clear weaknesses. There’s plenty of other decks to choose from though, and you can often find one that exploits enough of those weaknesses to be favored against the decks to beat. The catch is that “the field” has a higher metagame share than tier one does at most tournaments, so beating them is more important than beating tier one is. Even if you succeed and find an edge against the most popular decks in the room, that’s less valuable than having an edge against everyone else and you can get that easily by playing any deck from tier one.

The secret here is not to hunt for weaknesses in the top decks themselves, because trying to lean in on those with just the right mediocre deck isn’t a recipe for success in a wide metagame. The trick is not every low tier deck is weak because it lacks power; rather some of them are as powerful if not more than the strongest decks but have a clearly defined weakness. Historically, this has come from showing up with whichever linear deck people neglected to bring hate cards for — Dredge when they skimp on graveyard hate, Affinity when artifact hate is light, and so forth. In the case of Shadow Zoo, that key weakness is to spot midrange and control decks with spot removal (namely [Card]Fatal Push[/Card] and [Card]Path to Exile[/Card]. [Card]Lightning Bolt[/Card] is pretty easy to circumvent).

Two things have changed recently that have primed Shadow to take the spotlight. First, the printing of [Card]Veil of Summer[/Card] has eliminated half of the deck’s weakness. [Card]Fatal Push[/Card] decks are now mostly favourable matchups solely off the strength of Veil at shutting down black interaction. The second is the latest wave of additions to the format via Theros Beyond Death, [Card]Dryad of the Ilysian Grove[/Card] and [Card]Ox of Agonas[/Card]. While neither of these cards do anything for Shadow Zoo directly, they do wonders for [Card]Primeval Titan[/Card] plus [Card]Field of the Dead[/Card] decks and Dredge — two matchups that are food for [Card]Temur Battle Rage[/Card] kills but embarrass decks loaded up on spot removal by continuously producing free zombies.

Of course, identifying a good archetype is only step one. The next step is figuring out how to actually build it, especially since we’re building off a base that has largely been left ignored for the past few years. I’ll get into my thoughts on this in a moment, but first here’s the list I like right now:

Let’s start with the core of the deck. [Card]Death’s Shadow[/Card], [Card]Tarmogoyf[/Card] and [Card]Monastery Swiftspear[/Card] are the “good” threats. Shadow and Goyf are both inherently huge on their own while Swiftspear makes up for not being as independently threatening by setting up one-turn-kills with haste. [Card]Temur Battle Rage[/Card] and [Card]Become Immense[/Card] (and to a lesser extent [Card]Mutagenic Growth[/Card]) are what gives this deck its speed, converting turn three and four kills anytime one of our threats makes its way into the combat step. [Card]Street Wraith[/Card] and Bauble filter our draws while enabling our threats via life loss, prowess and card types while turning on [Card]Become Immense[/Card]. [Card]Thoughtseize[/Card] ties it all together as split card protection spell, pump spell and disruption. Pretty much everything else is negotiable.

Historically, one of the main issues the deck has had is threat density. Twelve threats is light to ensure you have one, but the next best options are fairly lacking. Typically the next in line was [Card]Wild Nacatl[/Card] (and in the days of [Card]Gitaxian Probe[/Card], people even played [Card]Steppe Lynx[/Card] as well over Tarmogoyf to avoid two-drops), but the cost to the manabase is fairly high since there aren’t really any desirable white cards.

I actually started with three and worked my way down. The first problem here is that two mana for a cantrip is terrible enough that drawing a OuaT after the opener can often tend towards a brick, and we have multiple other cantrips that make that more likely. The second is that the selection it provides is high but not off the charts. OuaT will hit any land about 85% of the time, a threat 75% and a [Card]Street Wraith[/Card] to rebuy about a third of the time it missed in the first place. While that card is still strong when it’s free, there’s still a real fail rate involved so we can only justify so much risk in pursuit of that payoff. The honest answer is that the correct number could be zero or two, but one maximizes the relative likelihood of having one in your opening hand but not drawing one later and the difference there is high enough that I value that more than anything.

[Card]Traverse the Ulvenwald[/Card] has the opposite issue where it’s more likely to be dead in your opening hand but usually an excellent draw on later turns, but it still has issues with diminishing returns and increases your exposure to graveyard hate. As a result we need to run another couple actual creatures to draw an appropriate number of threats. [Card]Gnarlwood Dryad[/Card] serves the role well enough, essentially being a [Card]Wild Nacatl[/Card] that doesn’t require us to trash our manabase to work. It also avoids some of the pitfalls that Traverse can fall into with Delirium since you can cast a pump spell at it to get an instant in the graveyard at will.

One of the key distinctions between Shadow Zoo and a deck like say, Infect is the raw size of the threats. This matters for avoiding toughness-based removal to some extent, but the other primary feature is that you don’t always have to go through pump spells to present a kill in a timely fashion. A 5/6 [Card]Tarmogoyf[/Card] or 6/6 Shadow can close the game quickly on it’s own even we don’t have pump spells. The net result of that higher impact is that we can afford to spend cards on removal and interaction, even in game one, without running out of cards to fuel our primary game plan.

The question remains though: what removal do we play? [Card]Fatal Push[/Card] is the strongest removal spell we have access to, but other options offer additional utility that can be valuable. [Card]Dismember[/Card] offers an extra lever to drop our life total to speed up Shadow kills, [Card]Lightning Bolt[/Card] can do the same in a pinch or push extra damage and [Card]Tarfire[/Card] offers a significant boost to Delirium count and [Card]Tarmogoyf[/Card] sizing.  There aren’t any particularly popular three toughness creatures right now so I believe [Card]Tarfire[/Card]’s upside is more valuable than Bolt’s. The upside of each of the remaining cards is comparatively low enough that it’s not worth the diminishing returns to not run a split, and we want to maindeck the [Card]Tarfire[/Card]s and [Card]Dismember[/Card]s and sideboard the Pushes since those more directly contribute to our own gameplan.

[Card]Temur Battle Rage[/Card] easily ranges between the best and worst possible card to draw at a given time. A second copy is typically a dead draw, but the evasion it offers is often make or break in creature matchups. Running one [Card]Crash Through[/Card] over the fourth copy offers some of that utility while hedging for scenarios where a Battle Rage is useless.

The manabase is pretty straightforward now that we don’t have to jam a bunch of useless Plains in it. You typically want to play a black land on turn one to allow you to play [Card]Thoughtseize[/Card] and Shadow on turn two whenever possible, then  almost always proceed to assembling one of each shockland by turn three (provided you don’t want to fetch the basic to manage your life total). Leave your fetches un-cracked when you aren’t using the mana, as it allows you to more precisely control your life total later and potentially get a free scry should you draw a [Card]Mishra’s Bauble[/Card]. [Card]Nurturing Peatland[/Card] is appealing for some extra utility, but it’s too important to be able to drop your life total immediately so you can play Shadow sooner or set up a kill immediately, so just play fetches and accept that occasionally you’ll flood a little.

[Card]Veil of Summer[/Card] is a backbreaking card for opposing interactive decks provided you can force them to fight on that axis. Against decks like Jund that mostly comes down to having some removal of your own for their threats so they have to present interaction to keep up. Against Urza things are a bit more complicated since the Thopter Sword combo can invalidate attackers and then kill you while avoiding direct interaction, especially when buying time by chaining [Card]Cryptic Command[/Card]s with Emry plus [Card]Mishra’s Bauble[/Card] plus [Card]Mystic Sanctuary[/Card] loops.

[Card]Collector Ouphe[/Card] gives us something they always have to deal with directly to ensure our Veils are live. Veil is more narrow against [Card]Path to Exile[/Card] decks, which at this point pretty much means exclusively Azorius or Bant Stoneblade. [Card]Painful Truths[/Card] is the best way we have to fight back against Path, maintaining enough resources to keep presenting threats once they’ve used a spot removal or two to bridge to the point where their counterspells are live.

We’re free to skimp on direct hate for Dredge since we just win the race against them, but having some just to make sure doesn’t hurt. [Card]Grafdigger’s Cage[/Card] is our graveyard hate of choice over [Card]Nihil Spellbomb[/Card] or [Card]Surgical Extraction[/Card] since it also serves as effective splash damage against Neobrand and is much more effective against Yawgmoth. [Card]Ashiok, Dream Render[/Card] is fine enough against Amulet along similar lines, but don’t fool yourself into thinking it counts as relevant graveyard hate. Three mana cards are just too slow to stop them from building a relevant battlefield via [Card]Cathartic Reunion[/Card], and doesn’t even come down before Ox on the draw.

We don’t really have enough good cards against burn to board out all the stinkers. It’s not a huge deal since the games tend to end quickly enough that a dead card in hand doesn’t always matter, but it’s still worthwhile to have a haymaker to draw to since [Card]Collective Brutality[/Card] is at least a passable card against decks like [Card]Devoted Druid[/Card] or [Card]Ad Nauseam[/Card].

A fairly common situation that comes up is you have multiple creatures, good attacks, and also enough pump spell damage to force through immediate lethal, but your opponent has mana up and might have a removal spell to blow you out. You could go for it right away, or just let them take chip damage, force them to blink first, then grow whatever creature you have left. You run out of life at some point and play a fair amount of air, so almost everyone has better draw steps than you as the game goes long, which means there’s real pressure to end the game at every opportunity. As a general rule,. ask yourself if they can stabilize the board or swing the game before you finish them off if you save your pump spells and they save their removal spell. If the answer is no, hold off. If it’s yes, shove all-in and cross your fingers.

Sequencing can be tricky with this deck so here’s some heuristics to get you started: