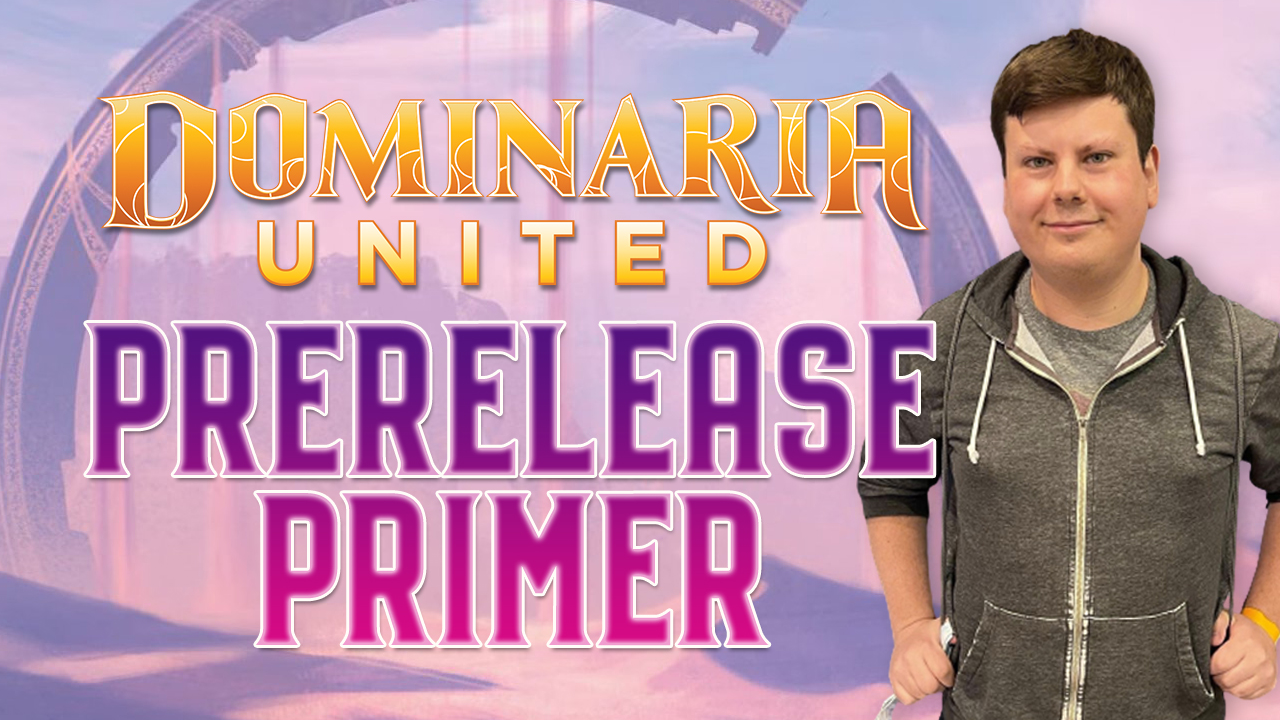 Prerelease is just around the corner (depending on when this article is published and where you live in the world, that may only be a few hours). Nevertheless, I always like writing a quick and easy to follow guide to help you navigate through playing with brand new cards for the first time. Prereleases, as a good friend once taught me, are where you learn to teach new players while also learning what the heck all the new cards do. Have fun, go wild in deckbuilding, and embrace “the gathering.”

Whenever I write a prerelease primer I try to focus less on the subtle intricacies of the set in discussion, and rather focus my attention on sealed fundamentals. Here’s the most important one:

Sealed games by nature are usually longer and more grindy. You lack the velocity and aggressiveness that draft decks usually have. You rely less on mechanical synergy between cards and prioritize power more than anything. When building I usually try and separate my rares and powerful uncommons first. I look for creatures that are big in stature and that can be hard for my opponent to interact with:

From there, I look for fixing and other ways I can effectively out-grind my opponents. I like to look for cards that are “two cards in one.” Examples of this are creatures that draw cards when they enter the battlefield or die. Other examples of cards like sagas that do multiple things in one card, or spells that can just draw you multiple cards to pull ahead. Here are some examples:

I also want to find interaction in my pool that can help me deal with opposing threats. These can be in the form of removal spells or counterspells:

Lastly, I search for fixing to help me cast all of my best spells which are usually in three different colors, minimum. Lands, some artifacts, and a lot of Green spells cover this:

I also really love the various defenders in this set.

Blight Pile and Coral Colony are exceptional Sealed cards, mainly for the fact that they can break board stalls. Just have one additional wall in play with the mill wall means you’re doing three “deck damage” to your opponent per turn, drastically decreasing the time they have to defeat you.

I actually played a couple of games on MTG Arena before writing this article when I had Academy Wall in play. One of those games I won at zero cards in library. The other I lost due to decking myself. If you have a lot of ways to sift through your deck, especially with cards like this, you can consider running more than 40 cards. While this is something many players hate to break, that golden rule of playing exactly 40 cards, there are cases where you don’t want to deck before your opponent does.

There you have it. Nothing too special there, but it’s a vital skill set that I think many players tend to lack. One mistake I see Sealed players make is that they play White too often. White is usually the weakest color in Sealed, this is due to the fact that it lacks the inevitability that other colors have, specifically Black, Green, and Blue. Black has ways to remove threats and re-buy cards from the graveyard, Green has big beefy creatures and fixing, and Blue has disruption in many forms as well as card draw. While I’ve seen and also been successful with aggressive strategies in Sealed, the majority of the time these types of decks get outclassed.

To reiterate, power is what pulls good sealed decks over the top. It’s crucial to identify what your pool may or may not lack.

Dominaria United has a couple of interesting mechanics and unique attributes that are important to learn for sealed. First and foremost, Domain.

Most pools will have a handful of common dual lands, a full cycle of ten being in the set, which have two basic land types stapled onto them. It’s important to play all of your dual lands in colors of mana you need if you’re playing cards that benefit off of Domain.

Since Sealed is so grindy by nature, it’s not a hinderance to play multiple lands that come into play tapped. I’d play that extra dual land if all it’s doing is helping you kick spells or adding to your Domain value. Funny enough, while this set has mostly mono-colored cards, because of various kicker costs a lot of these cards can be treated as multicolored.

At its worst, Vineshaper Prodigy is a 2/2 for two mana, not terribly exciting. Say you’re a base Green-Black deck that has some access to Blue mana in the form of a dual land. Vineshaper Prodigy becomes a solid way to put a body into play and find one of your bombs or removal spells at that point. While I’d be careful of stretching your mana, this format looks incredibly easy to splash cards for their kicker cost. I at least like that you can cast cards like Vineshaper Prodigy for their simplified cost if you need to. Sometimes you don’t have time to wait until turn four if your opponent is on the play and pushing the offensive.

Here are a couple more important things to know. While I can’t cover every specific card interaction in the format, there are some worth knowing about for playing sealed.

Goblin Picker seems like a fantastic two-drop in Sealed. Usually 2/2s for two mana with upside are good to include in any sort of Limited deck, however in Sealed you usually want to stray from playing too many 2/2s for two. The issue here is that the longer the game goes, the more easily outclassed a 2/2 gets on board when your opponent starts playing much bigger threats. Picker is one I’m happy to include because it can help you escape from mana flood and screw. You can sandbag land cards in your hand (that you don’t need to play) to get rid of in return for more powerful spells. If both you and your opponent hit a pocket of lands on top of your libraries, the player with the Goblin Picker is going to come out ahead.

I’d avoid playing combat tricks in general in Sealed. Usually one or two are fine, but combat tricks are usually ways you give up resources. Combat tricks are better in less-grindy games, such as in Draft, when usually you’re pushing through damage at a much faster rate.

In Sealed it’s too much of a liability to get blown out by a removal spell. Usually the fight you’re trying to win with a combat trick won’t end up positive for you in the long run. Sealed is more about accruing resources and a board state that will put your opponent at bay, less about trying to kill your opponent’s one creature with a combat trick assuming nothing will go wrong. It’s important to win the war, not the battle. However, I don’t mind combat tricks that can draw cards or scry, so that they have some value in case you get blown out. I’m a little less-forgiving with combat tricks like Furious Bellow, which are decent in Izzet spells decks in this format.

In conclusion, Dominaria United looks like an incredibly fun Limited format. With all the fixing, and reliance on Domain, I think that going five-color in Limited isn’t hard at all, especially in Sealed. If you remember one thing from this article, remember to play your best cards. Be flexible, know the strengths and weaknesses of your deck, and don’t be afraid to switch things around between games or rounds. Most importantly, have fun and make some friends. That’s really what prerelease is about.

Have a sick deck? Tweet at me @roman_fusco – happy gaming!