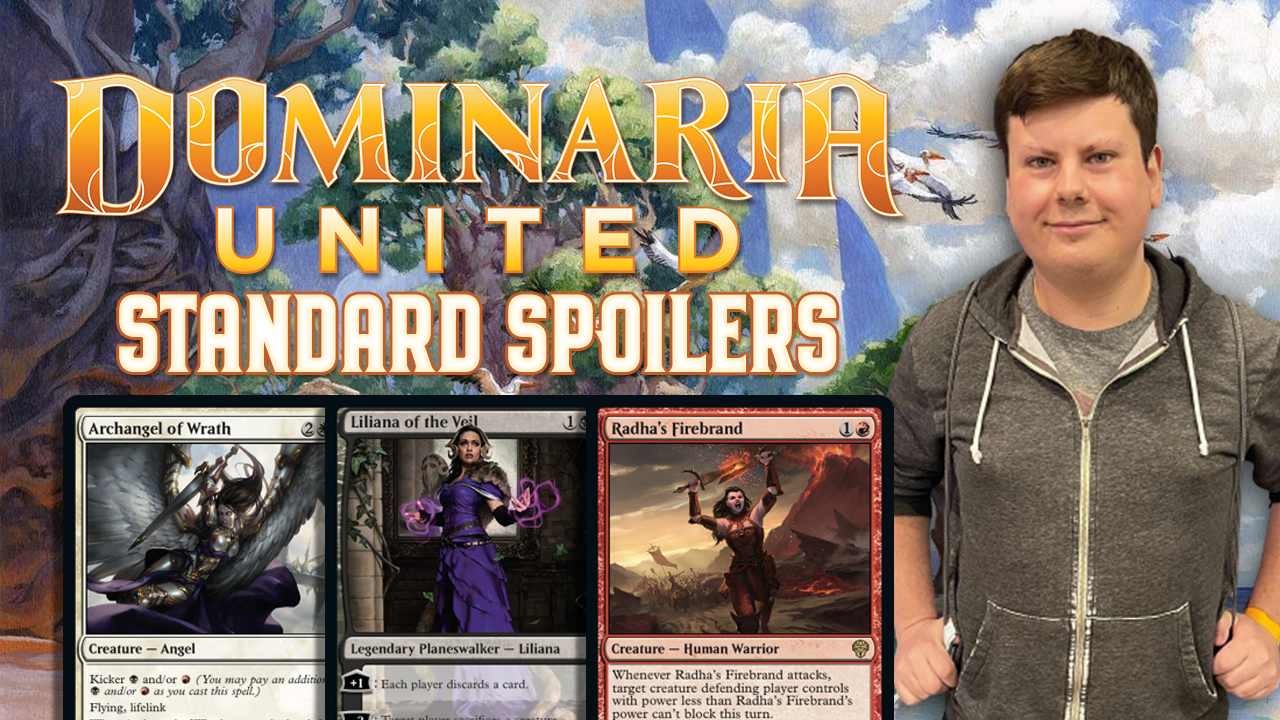 Spoiler season is finally upon us! With the release of Dominaria United four sets rotate out of Standard and we’ll have an entirely new metagame. As I mentioned in my last article, however, many of Standard’s most powerful cards actually stay in the format. Cards such as The Wandering Emperor, Fable of the Mirror-Breaker, and Ledger Shredder already see play in non-Standard formats. While we’ll have new decks it’s interesting to note that the overall power level of Standard doesn’t change much.

While Standard hasn’t been a premier format of Magic in recent years (except on MTG Arena), with the next Regional Championship season being Standard there will most likely be more Standard RCQs. No matter if you’re a Limited, Modern, or Pioneer specialist if you qualify for the next RC in Anaheim you’ll have to know the ins and outs of the format.

Dominaria United has already shown us a variety of cards that might see play in the next format. Without further ado let’s dive into some of the spoilers that are worth analyzing:

It’s kind of hard not to mention the elephant in the room, Liliana of the Veil. Liliana of the Veil is a card that’s seen lots of play in both its Standard and Modern lifetime. While there’s been a ton of discussion about the validity of Liliana in a format like Standard, especially with power creep over the years, I’m of the opinion that she’s still nothing to smirk at. Let’s take a look at the kind of deck Liliana was successful in the last time she saw Standard play:


The first deck is Jund Midrange from Stephen Mann, Pro Tour Gatecrash, 2013. This midrange strategy sought to two-for-one the opponent in a variety of different ways. Liliana is a natural fit here, as the deck is trying to kill things in its path and eventually put a threat into play that the opponent lacks the resources to deal with. While this deck doesn’t have any graveyard-centric cards to discard to Liliana, it’s worth noting when you should +1 Liliana, or when to wait when you can discard excess lands or cards that have no value in the current matchup.


This next list comes from Alessandro Portaro from Pro Tour Dark Ascension, early 2012. This deck actually reminds me a lot of the Esper Midrange decks floating around current Standard. Lingering Souls is akin to Wedding Announcement, Elspeth and Sorin are similar to The Wandering Emperor, and the wraths and removal spells are interchangeable. Here, Liliana thrives when you can land her on a board state of one or two creatures, have one be sacrificed and deal with the other with a variety of removal spells, or by blocking with a token until you can wipe the board clean. Liliana’s plus one ability also synergizes well with flashback cards, in this case Lingering Souls.

Overall, I think Liliana will be playable in the next Standard format. I think she pairs nicely with The Wandering Emperor and other token generators. I think Liliana is such a powerful card because it gets the job done no matter what kinds of decks are in the format. If the format is fast, she can at least slow down the opponent by acting as a three-mana terminate that gains some life. Against midrange and control decks she’s a great turn three play that can start running the opponent out of resources. Only time will tell how playable Liliana will be, but here are a couple of cards that I think pair nicely with one of Magic’s most powerful three-mana planeswalkers, it’s worth noting there are some great graveyard-centric cards in the current format:

Speaking of Black cards, Cut Down is a cheap removal spell that I think will prove to be useful. This isn’t a card I’d want to play 3-4 copies of, like Fatal Push, but I think this’ll help get the job done for various decks. For more defensive decks this can kill off early one and two-drops. Against control decks it can at least kill off Wandering Emperor tokens. While this card is obviously less versatile than a two-mana “terminate” effect or Fatal Push, it’s a cheap interactive spell that pairs well with Liliana of the Veil.

One surprising fact about Standard for the last year or so was the complete absence of a good Mono-Red deck. Standard formats at its base usually have at least one solid Mono-Red deck. While Mono-White decks are present in the current Standard format, there’s definitely something missing about shocking the opponent’s face or casting creatures and immediately turning them sideways. Lightning Strike is just a solid burn spell that’s seen play a multitude of ways in Standard’s history, so that one isn’t worth talking about as much as the two new creatures.

Radha’s Firebrand is just…solid. A two-mana 3-powered creature with a falter effect AND a pump ability stapled onto it is too good to pass up. Making your opponent’s best blocker useless every turn is extremely powerful – this also means your opponent can’t attack well assuming they have to play around other haste threats or removal spells. This card also greatly benefits from a turn one Kumano Faces Kakkazan, adding an extra point of power. While Radha’s Firebrand’s ability will cost five mana in a Mono-Red deck, this is a very useful ability since Red decks can run out of things to do with their mana. The pump ability also will take care of your opponent’s largest blocker if they put something big into play on a later turn. Overall, this card is shaping up to be a complete staple during its Standard life cycle.

Phoenix Chick is definitely nowhere near as powerful as Radha’s Firebrand, but a hard to block 1/1 that hits every turn is a nice addition to the deck. It’s a good card to pitch to your opponent’s Liliana, and it can come back even if you’ve been wrath’d (with some work put in, of course). While a 1/1 flying, haste is nothing to write home about, the synergy again with Kumano makes this card an annoying threat that your opponent will have answer.

Sphinx of Clear Skies is very akin to Iymrith, Desert Doom with a couple of upgrades. First, I think it’s more important to have ward 2 than ward 4 only when you’re not attacking. This pressures your opponent’s interaction more on your turn. Second, depending on the deck this card is in you might easily have 3+ types for Domain due to the Streets of New Capenna “triomes.” This card seems like great follow up to a wrath in an Esper Control style of deck. While I don’t think you’ll play too many copies of this card it’s definitely one I’m keeping my eyes on to abuse with the Streets’ “triomes.”

Archangel of Wrath is probably my favorite card to get spoiled so far, or at least tied with Liliana. I love cards that can turn the tide of a game, and Archangel is certainly one of them. For four mana you get a 3/4 flying, lifelinker. While this may not be able to block a buffed Radha’s Firebrand it can certainly swing the tide in a game if you’re a midrange or control deck versus an aggressive strategy. However, that’s just the floor of this card. For one extra mana you get a “Sacred Fire” effect, allowing you some lifegain while either dealing some direct damage or picking off a smaller creature or low-loyalty planeswalker. For five mana that’s a pretty good deal. For six mana you get another two whole damage and life, giving you another opportunity for some face damage or another removal spell.

This card is just bonkers in my opinion. It feels like a mini Baneslayer Angel that can also act as a Flametongue Kavu in the right situation. The fact that this can also target cards like Liliana and the Wandering Emperor are pretty huge to me. WWBR is definitely an intensive mana cost, however. I could see this deck in an Orzhov midrange deck where you can splash Red off of a “triome” land. I could also see this card in a Mardu midrange deck with cards like Liliana, Emperor, and Fable of the Mirror-Breaker. Being able to ramp out faster into this card and fix your mana for it with Fable seems like a pretty sweet deal, plus getting a 3/4 haste, lifelink, flying token is not bad either. This card feels like it could be very busted in the right deck, but it’ll take time to figure out the right fit for this Mardu-ish angel.

Guardian of New Benalia is another solid aggressive card from Dominaria United. While being a solid two mana 2/2 on face value, its enlist ability combined with its ability to become indestructible at instant speed make this two-drop a force to be reckoned with. This card feels like it would slot in easily in White aggro decks with Luminarch Aspirant rotating. I think this card will be important in breaking stalemates in aggro mirrors, since it can grow while also being an indestructible threat – just watch out for opposing Wandering Emperors.

While I’m not positive Nemata will see a ton of play, this card felt similar to Kalitas, Traitor of Ghet so I wanted to at least mention it. Nemata is a pretty nice card to pair with Liliana of the Veil and Cut Down. It blocks Phoenix Chick with ease and can be put out of range of various damage-related spells. I think the issue is finding a solid deck for Nemata to find a home. There might be a Golgari or Sultai Midrange deck with cards like Wrenn and Seven, Liliana, Tamiyo, and various removal spells.

That concludes part one of my Dominaria United Standard review. Check back next time for part 2! As always, thanks for reading.