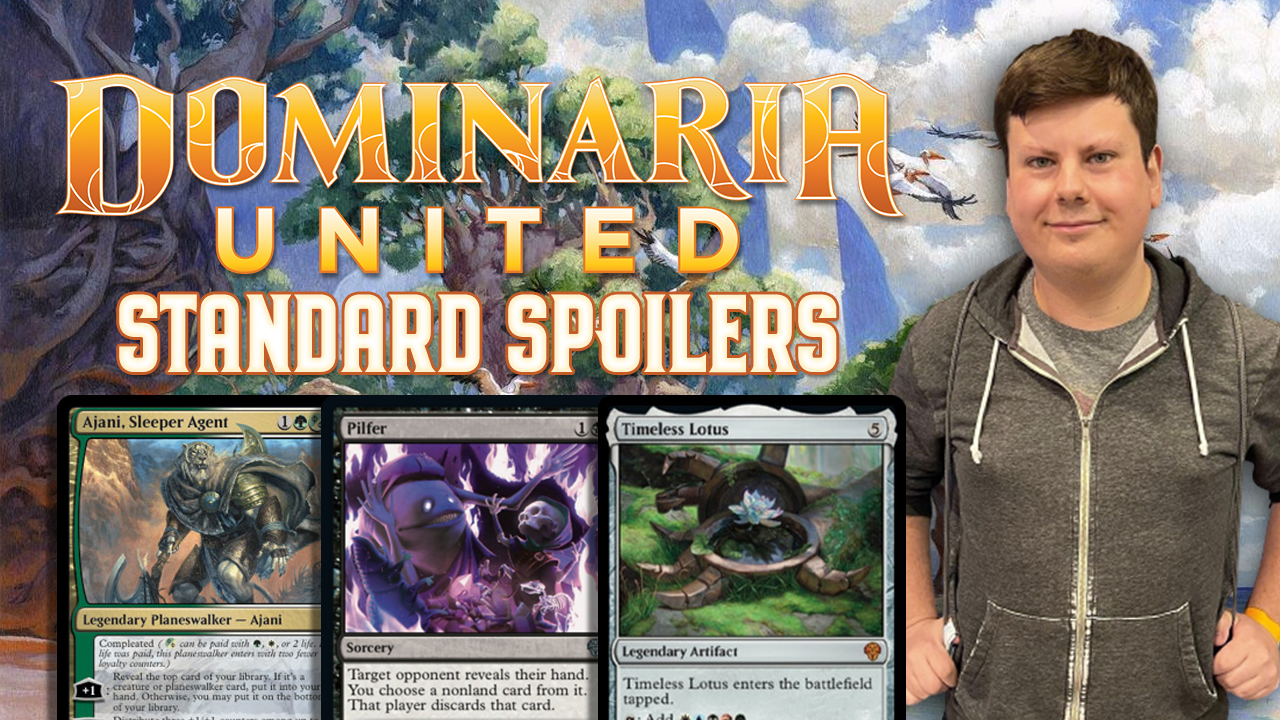 Welcome back to my review of Dominaria United cards for Standard! In my last article I talked about some of the major cards I think will make an impact on the Standard metagame come rotation next month. Let’s continue my exploration of what Dominaria United has to offer!

Timeless Lotus on first glance looks more like a Commander card than a Standard one. However, there’s one critical interaction in the upcoming Standard format that I think will make this card viable. Enter: Teferi, Who Slows the Sunset.

While I’m not the biggest fan of the MTG Arena Alchemy format, one strong interaction in the beginning of Alchemy’s release was the synergy between Teferi, Who Slows the Sunset and Key to the Archive. Key in combination with Teferi gave you a bunch of extra mana at your disposal, and could help you quickly fire off expensive spells, such as Approach of the Second Sun, which was in Key’s spellbook. Timeless Lotus plays a similar role here. While Lotus doesn’t add a card to your hand, being able to tap and untap it with Teferi in play is serious game. What would you be casting with it though?

The Kami War is an obvious first choice, since you can cast it off Lotus and any land you untap with Teferi. Heck the turn after you play Lotus you can cast two Kami War with Teferi in play. Magical Christmasland maybe, but I think there’s something there. There are two other cards from Dominaria United that could fit in this sort of strategy:

Joint Exploration is sort of the Growth Spiral/Omen of the Sea card of the next Standard format, and a nice way to help ramp into your Teferi/Lotus combo. Temporal Firestorm is a nice wrath that benefits from you having extra mana at your disposal.

If your deck is playing cards like Teferi and perhaps The Wandering Emperor, Firestorm is a great wrath that can help further your board state by protecting your planeswalkers while removing opposing pressure. Overall, I think there’s something worth exploring here.

Two mana discard effects have always seen play in Standard. While the most recent iteration of this effect, Check for Traps saw some play, I think Pilfer compliments Liliana of the Veil nicely. Having no downside, unlike cards in Standard’s past like Transgress the Mind, is a nice upgrade for this kind of effect. This card should see decent play, I definitely want to brew an Orzhov Midrange deck with Pilfer, Liliana, and The Wandering Emperor now.

While Black has had 1BB sorceries that give all creatures -2/-2, Temporary Lockdown is White’s alternative, taking out nonland permanents as well. This card is a good sideboard option for decks like Azorius Control, and perhaps other White midrange strategies. Against Mono-Red this card deals with Kumano Faces Kakkazan, Radha’s Firebrand, Bloodthirsty Adversary, and Phoenix Chick. While I wish this could take out Adeline, Resplendent Cathar, this will probably get the job done versus other non-Red aggressive decks as well. I’m not sure if this card is maindeckable, but if the format is aggressive enough (as it usually is early on in a format) I think this is a nice option to have in your sideboard.

Yavimaya Iconoclast caught my eye for a few reasons. I feel like two mana 3/2s are often decent enough in a given Standard format, and this one has the upside of being a 4/3 (with haste!). I like that if you kick this card it puts itself out of range of Cut Down, and it might be a nice hasty way to take out a Liliana or opposing planeswalker. Halana and Alena will still be in the format come rotation – if you kick this card on turn three and follow up with Halana and Alena, you’ll have a 6/5 trampler attacking your opponent on turn four! That’s some serious damage right there. Gruul doesn’t seem to be all that deep post-rotation, but you do get Tovolar and Arlinn and the addition of Lightning Strike. Yavimaya Iconoclast is a card that could easily make Gruul a playable archetype in the near future.

One last note on Gruul – Colossal Growth is the perfect Giant Growth effect this deck might want. I’ll definitely be keeping my eyes peeled for more aggressive Red and Green creatures as the set continues to get spoiled.

Stronghold Arena is a card I’m happy to play in any of my Black-based creature decks. This is probably better as a sideboard option against Midrange and Control decks, however. I like that Arena can stick around pretty easily and it can help buy back cards after a Meathook Massacre or after having your hand ripped apart by Liliana and discard spells. I’m also curious if aggro decks want to bring this card in on the play as a way of out-carding the opponent. I don’t know if there will be an aggressive enough Golgari deck for this card, but I think Standard has options for Mono-Black or Orzhov aggro.

Which leads me to my next two cards! Cult Conscript and Evolved Sleeper seem like perfect one-drops for a Mono-Black aggro deck in Standard. There are already a couple of solid Mono-Black aggro cards in Standard, such as Okiba Reckoner Raid, Blade of the Oni, Graf Reaver, Tenacious Underdog, Slaughter Specialist, Graveyard Trespasser, Faleknrath Forebear, and Shakedown Heavy to name a few. I’m also curious to see if there’s a Mono-Black midrange deck that can utilize Liliana and Pilfer in combination with cards like Invoke Despair and Sorin the Mirthless. I could talk all day about potential upcoming Standard decks, but let’s focus back on some of the new cards joining us.

Ajani, Sleeper Agent is a planeswalker that seems it only has a home in niche archetypes. Unlike Liliana, which could see play in a variety of Aggro, Midrange, and Control decks, Ajani feels exclusively like a Selesnya Aggro or Naya Aggro planeswalker. I’m a little bummed you can’t play Ajani for 3 mana and 2 life and not -3 immediately. Playing Ajani after your opponent casts a Liliana is a nice way to fight your opponent on cards, since you can draw extra cards while your opponent has to always discard one. I could see Ajani being useful in a Naya deck to find Fleetfoot Dancers, but overall this card feels like it wants to be in a go-wide style of deck.

Resolute Reinforcements and Join the Dance are two solid options to spread out your +1/+1 counters on. I kind of wish the token from Resolute Reinforcements was a human so it could be pumped up by Sigarda, Champion of Light. I’m of the opinion that Ajani’s playability will coincide with how viable a Selesnya Aggro or Tokens deck is in the next Standard period. Ajanis have historically found their way in these sorts of decks, and I won’t be surprised when a couple copies show up in one of these go-wide type of strategies.

I’ll be wrapping up my thoughts on Standard spoilers in part three of this article series! As always, thanks for reading.