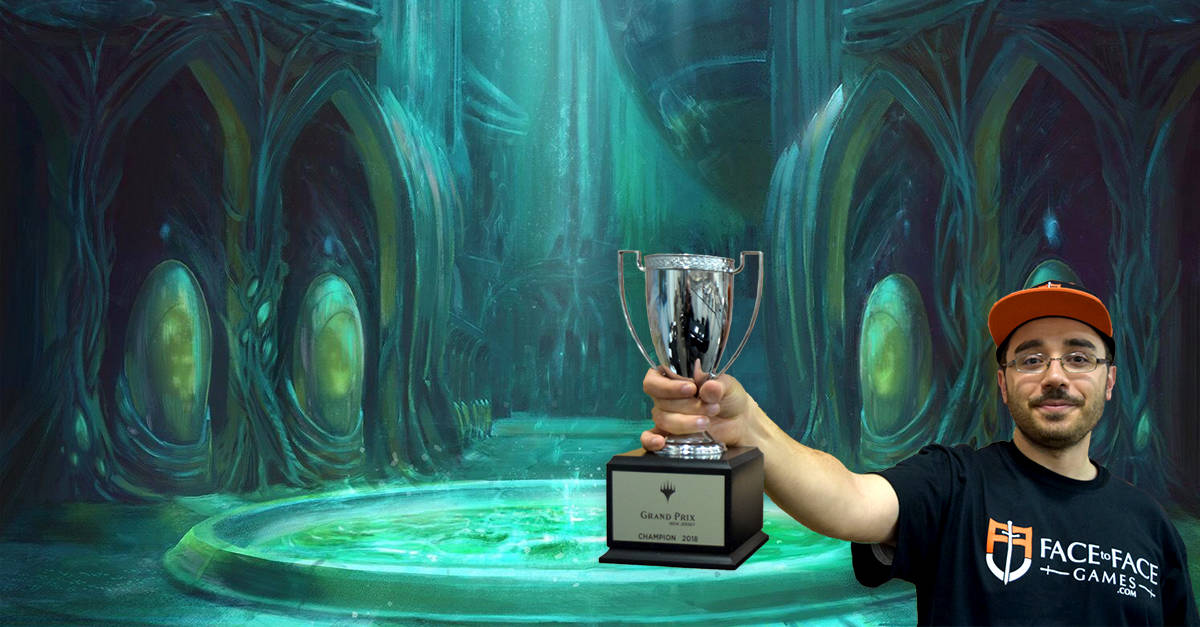 The title leaves some big shoes to fill, but I’m confident we can get anyone from zero knowledge of Standard to tournament ready pretty quick. For starters, some may not know but there are Regional Pro Tours going on online via the Arena platform.

We have seen an overall dominance of Temur Reclamation across the first few tournaments so far. This deck looks something like this list by Jean-Emmanuel-Depraz. 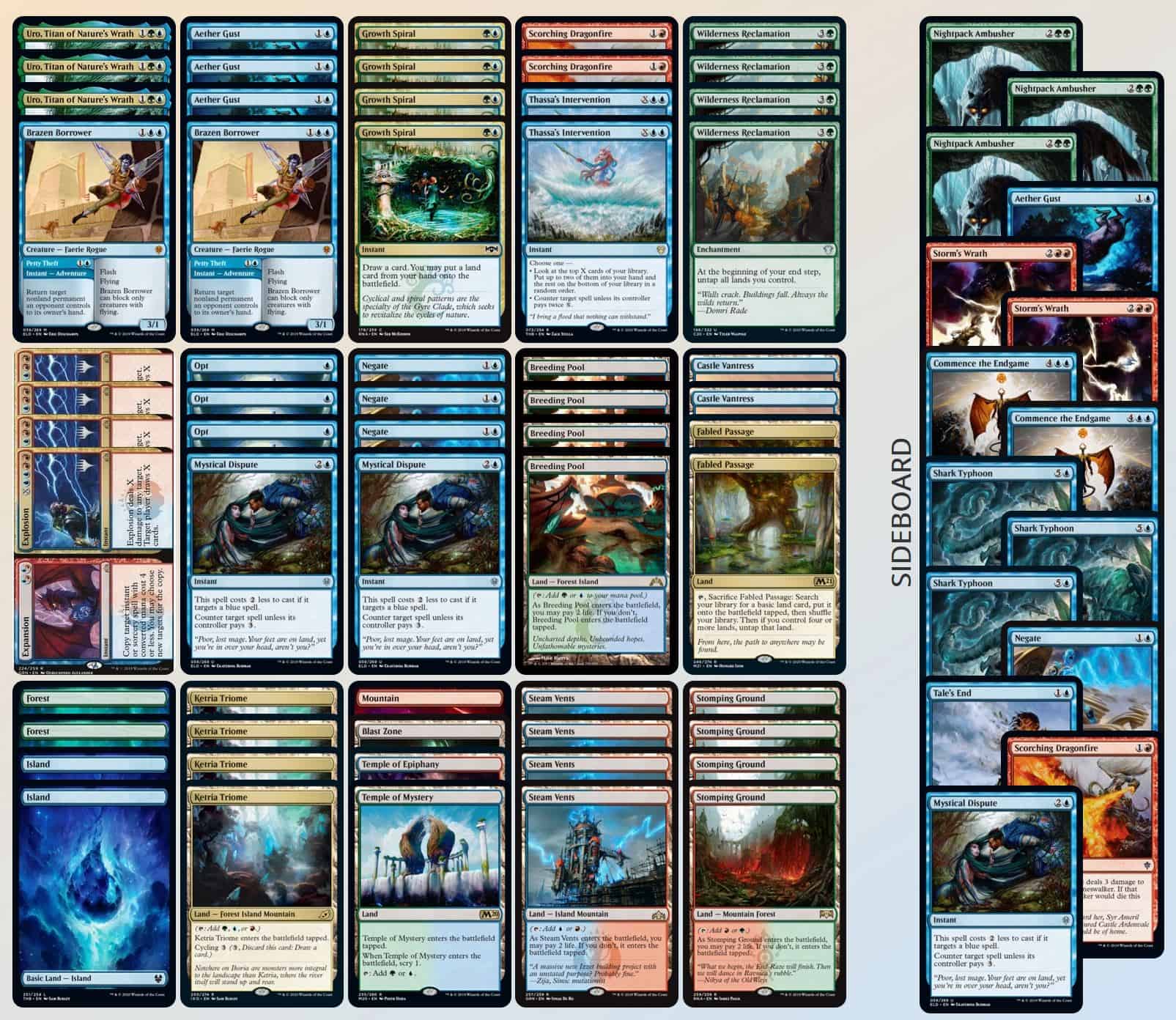 This deck tries to ramp out lands. Play a Wilderness Reclamation to net a lot more mana and then abuse it with spells that can be enhanced with even more mana. Such as Expansion // Explosion or Shark Typhoon. The fact that it has the best creature in Standard with Uro, Titan of Nature’s Wrath as a backup plan should tell you why this deck is so powerful.

So if we can establish that this deck is the deck to beat, then we can talk about how the metagame unfolds from here. Temur’s natural enemy has evolved into Bant Control. This is because Bant has access to four copies of Teferi, Time Raveler. The reason this is so important is because of the end of turn restriction on Wilderness Reclamation. If you can’t play instants then you do not get to take advantage of the mana. On top of it, it makes any counter magic nearly unplayable. It bounces the giant Shark Typhoon tokens we make and also nets the controller card advantage. You could kind of say it does it all!

Let’s look at the Bant list that took Louis Del Tour to a top 4 performance in RPT1: 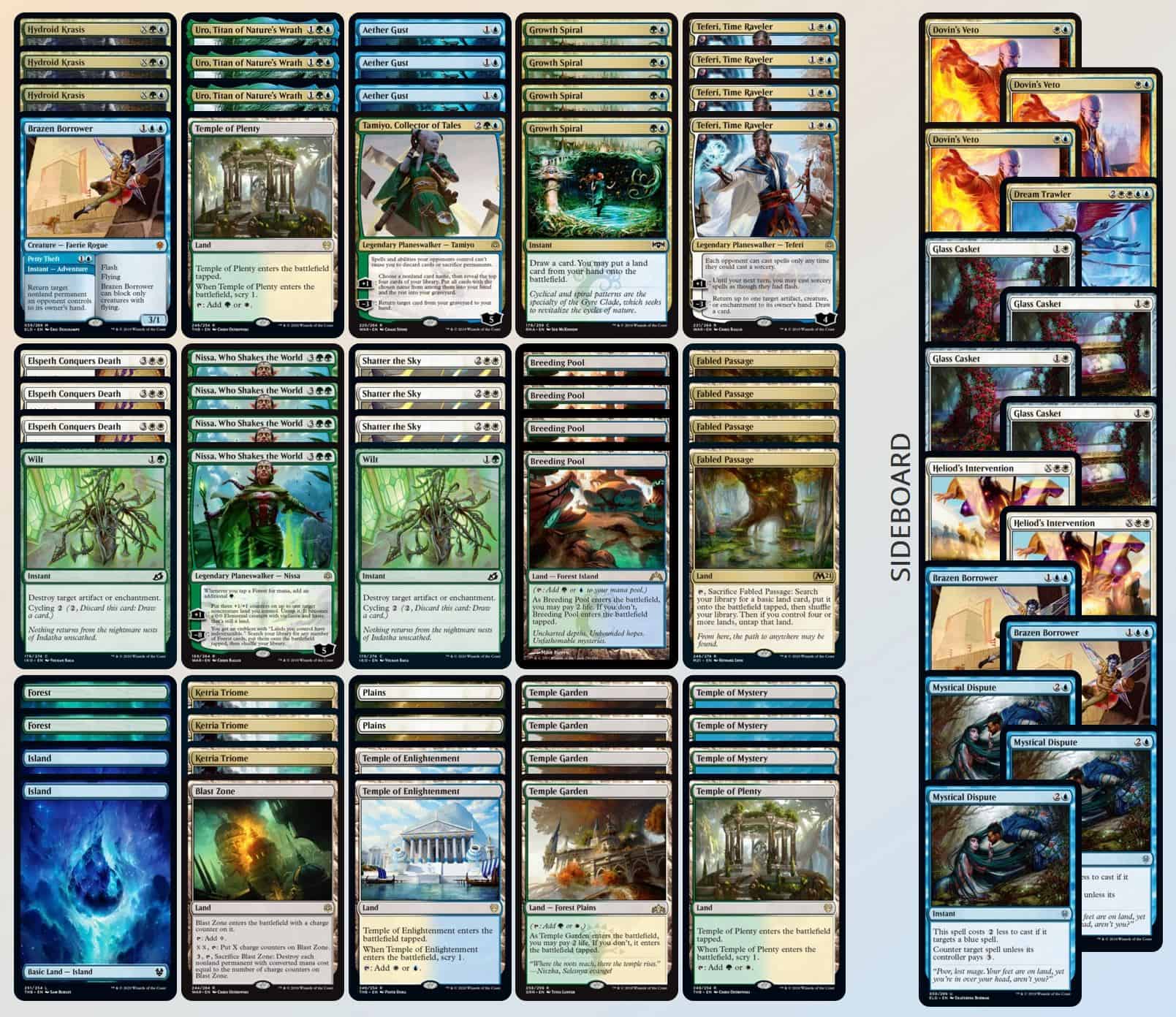 So instead of relying on Wilderness Reclamation for all the additional mana. This deck uses Nissa, Who Shakes the World to gain additional mana. This allows for more main phase interaction in the form of Hydroid Krasis, which kind of does it all with size, evasion, life gain, and card advantage. Bant seeks to play the long game and win through repetition value accrued through the usage of planeswalkers. Do not be surprised to go from a really high life to dead in a few swings with the giant creatures this deck produces however.

So if Temur Reclamation is top dog and Bant is favorable against it, why not just play that right? Well it’s because there are other top contenders for which Bant is not favored. One such deck is Jund Sacrifice or Jund Food as it is sometimes called. This list was piloted by Eduardo Sajgalik to another RPT2 Top 8 performance: 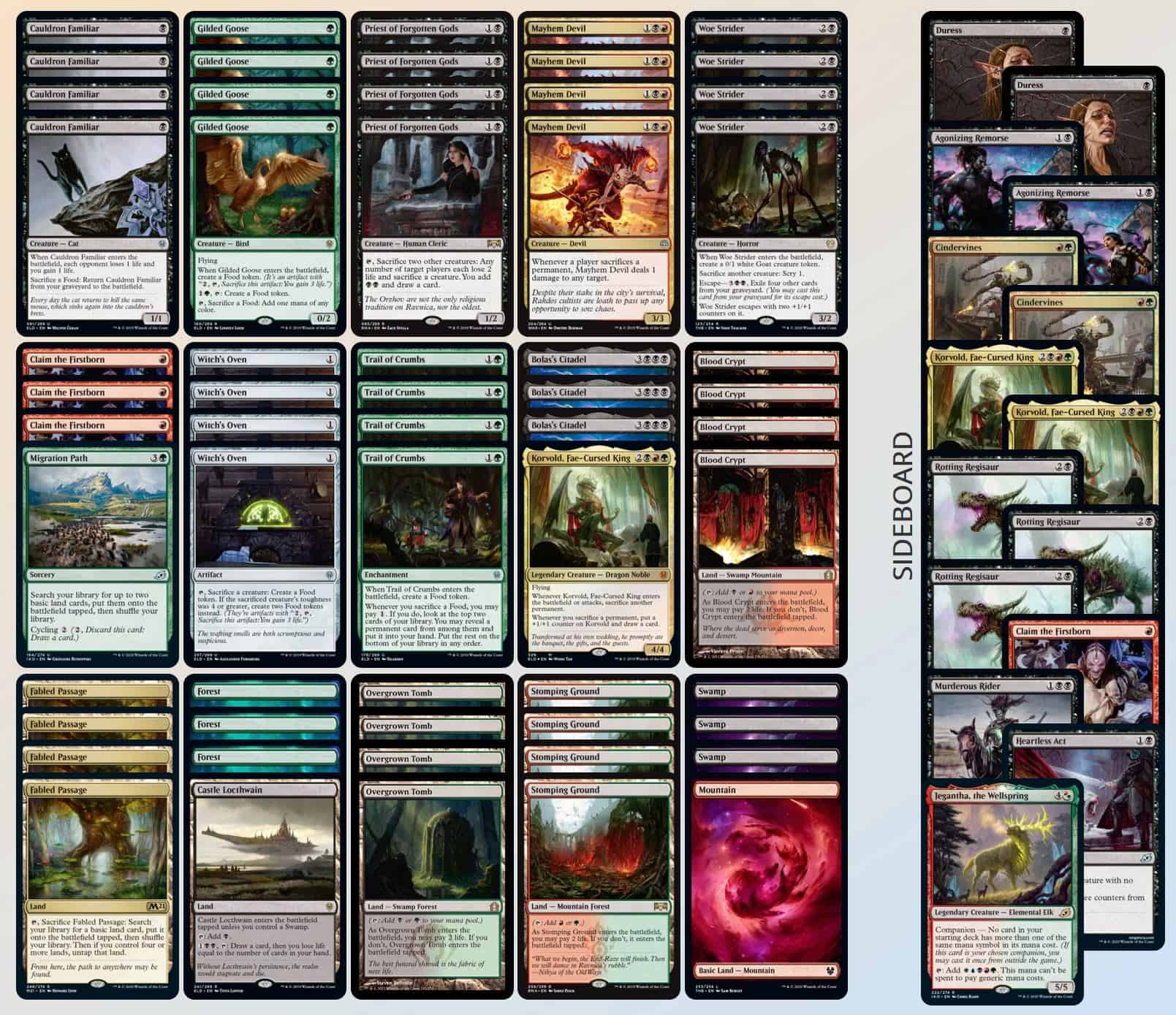 Jund Sacrifice is built more upon two card interactions that accrue value and then eventually death to the opponent. Bolas’s Citadel can be a late game finisher, but Witch’s Oven Cauldron Familiar and Mayhem Devil present enough of an aggressive threat that the game may not even go long. While lists can be adapted to change results, Jund Sac is considered to be a favorite against Bant Control due to its powerful creatures that need to be singularly answered.

So just play Jund Sac right? Again no, because Jund Sac has a very hard time fighting against the speed of Temur Reclamation and that\s the most played deck. So welcome back to the Rock, Paper, Scissors world of Standard right now.

So what should you do? Well you can either jump on one ship and try to find a good sideboard plan to adapt for your bad matchup without it costing you too many points in the other matchups or the mirror. Or you could go rogue and try something some have had success with as well.
Fellow Rivals player Eli Loveman piloted a BR Aggressive strategy to a RPT2 Top 8 performance as well. His list shown here: 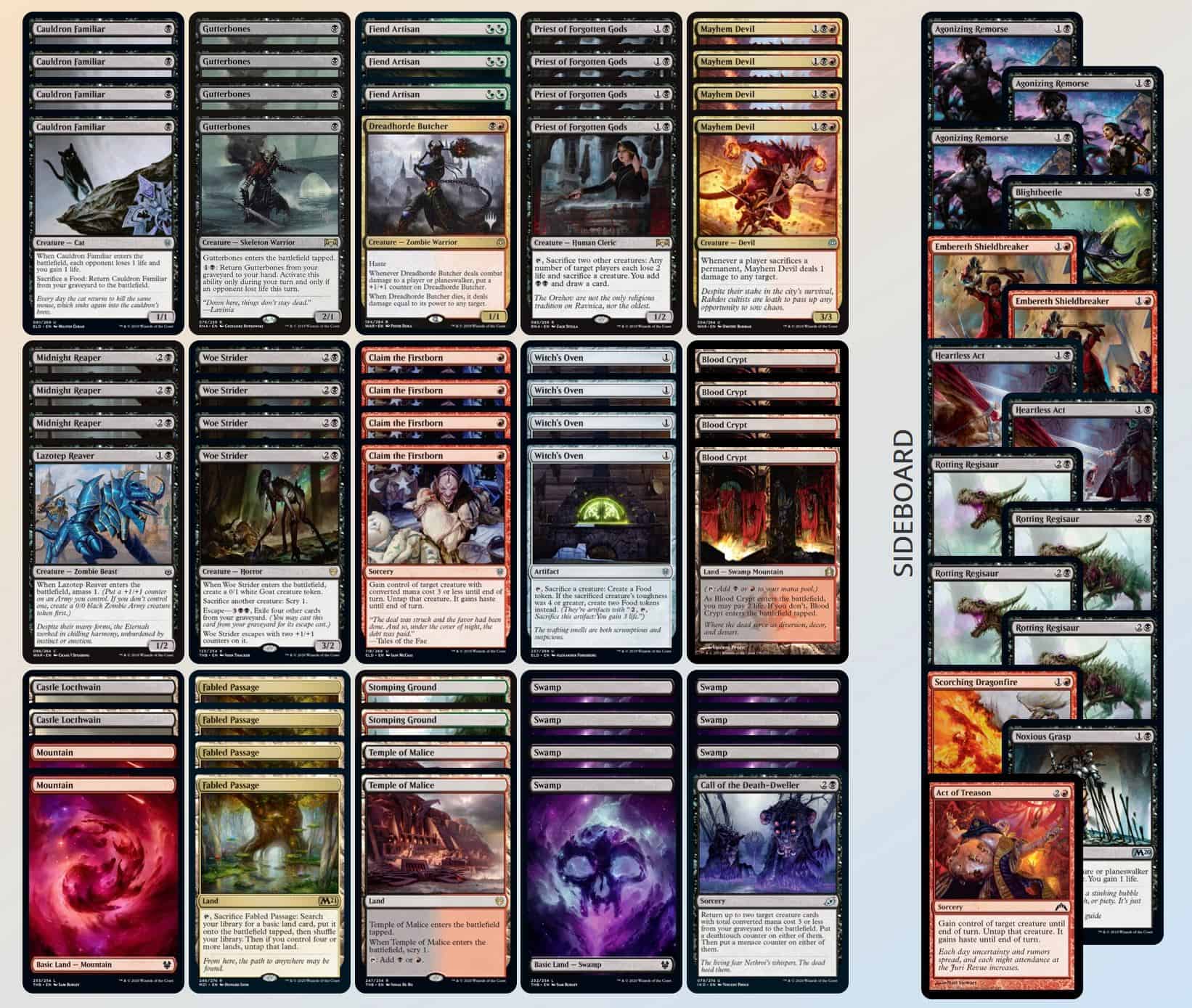 This has many of the elements that Jund Sac has without the addition of the card advantage aspect that strangely the color green has given it. This deck can run over Temur Rec before they can begin to setup and provide an adequate battle against the more controlling decks like Bant.

The development of a card like Fiend Artisan is exciting to see, because it is obviously powerful albeit limited by certain limitations. The cost to sacrifice being one plus the converted mana cost of the creature it gets is akin to using Green Sun’s Zenith to locate a creature. If a card costs one additional mana it is less effective in general. However this card gains advantage in that your creatures produce useless additional creatures ripe for the saccing. Which means it is card advantage and Fiend Artisan develops into a powerhouse itself as it grows with each activation.

Its not an easy choice to just say sure that’s what I will play then. Decks like Rakdos Aggro can be very draw dependant and have very little in the way of producing much of a fight when they flood out. This deck often squeaks out the win just before your opponent can stabilize and therefore it’s also extremely important to play precisely.

Ultimately I would say that you should pilot what you feel comfortable with. If you do decide to go rogue from the Rock, Paper, Scissors setup, be sure and test the big three matchups and try to ensure that at least two of them are favorable. Otherwise abandon ship! Ultimately try your best to have fun and adapt strong play centered around this principle. It will help anyone to grow into their happiest most winningest self. Thanks for tuning in and see you next time!