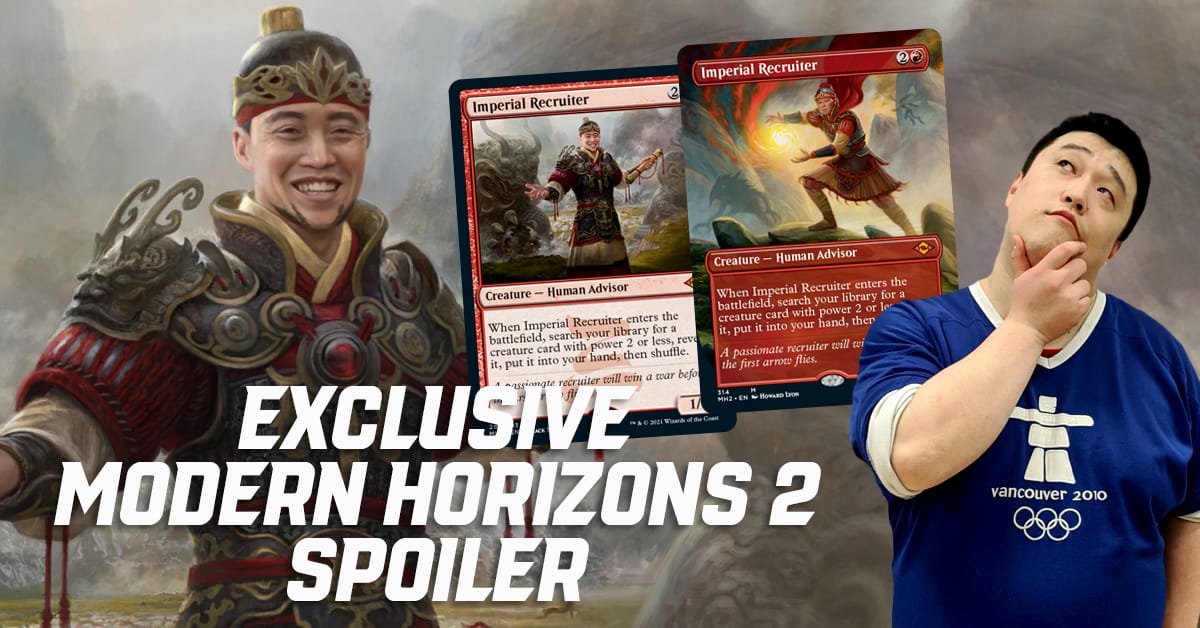 We’re back with another sweet preview from Face to Face Games, this time for Modern Horizons 2! I’m excited to talk about this oldie, but a goodie – a card that has been a Legacy staple entering the Modern fray for the first time!

For the readers who know me, Modern has been near and dear to my heart, being the competitive format of choice since I started playing 4 years ago. I’m especially excited to bring this preview for Modern Horizons 2 (“MH2”), as I actually believe that their heart was in the right place with MH1 and they did a lot of things right with MH1 that enriched old decks and birthed new ones (Seasoned Pyromancer, Archmage’s Charm, Kaya’s Guile, Giver of Runes, various Goblins, etc).  Of course, there were a few negative outliers that it’s remembered by… but let’s not go there today!

I understand that a few very smart professionals collaborated with Play Design in creating MH2 which is encouraging. Given that and given the types of cards I’m seeing spoiled thus far (plus our preview card of course!) I’m excited at the direction of MH2 and hopeful it’ll be a positive addition to the format. But enough chatter! Let us meet the latest addition to Modern… Imperial Recruiter!

Legacy stalwarts will recognize this card as a former staple of Imperial Painter, as well as having seen some applications in decks such as Aluren and Food Chain.  Its cousin, Recruiter of the Guard, has been a staple in Legacy Death & Taxes since its inception.

I’m really excited for these generic tutor-on-a-body cards to be introduced to Modern, as Modern also has plenty of powerful creatures with powers 2 or less. I did a bit of brainstorming to see if this card has any potential in Modern. I would first think about what type of decks it would function best in and for what purpose. Inspired by the Legacy decks listed above, I would summarize as follows:

From there, I considered some of the strongest creatures in Modern with powers 2 or less. Though obviously not as expansive as Legacy, we still have a lot of doozies! Here’s a short list of what immediately interested me (I’ve bolded the cards that I’m most excited for):

That being said, here are my bets for where Imperial Recruiter has the most potential to make the most impact in:

Stick tap to noted taxes maestro @SpiderSpaceMTG for a sample WR taxes list from before:

Drawing inspiration from the Legacy applications, this was my natural first stop. The Wx taxes archetype has gotten a lot of superb upgrades over the last few years (Stoneforge Mystic, Giver of Runes, Skyclave Apparition).  The best part? Imperial Recruiter can get all of them!

At first glance, this seems like a perfect home for Imperial Recruiter. It can get many of the relevant hatebears (Thalia, Arbiter, Stoneforge, Auriok Champion, Revoker, Magus of the Moon) and utilizes Aether Vial for the timely deployment of said hatebears as well as color fixing for a deck that’s trying to cast Blood Moon effects as well as 1WW spells. Talking to Spiderspace, he didn’t think the red splash added enough before, but I wonder if the metagame is right (where Magus of the Moon is good) and the presence of Imperial Recruiter as a massive boost in consistency is enough to transition RW Taxes as the preferred Taxes variant!

For a while, Noted MTG crusher Sam Pardee (@Smdster) championed this goofy looking blend of white weenies, taxes and Ballista/Heliod combo.  From what I could see, he went on a tremendous tier, including this 8-0 run in the Modern MOCS with the above decklist

One of my favourite potential applications with Imperial Recruiter not mentioned in the first bullet is the ability to recruit up Walking Ballista for any combo decks with it as the win condition (some sort of Birgi-fueled storm deck could also be interesting.. But nothing has come to my mind yet!).

In this archetype, Imperial Recruiter would get all the usual suspects from the hatebear roster, but also other powerhouse cards like Luminarch Aspirant, Walking Ballista, and Giant Killer (pretty cool that you can tutor for a removal spell!)

By my estimation, Imperial Recruiter would get every relevant Goblin except for Goblin Trashmaster.  It would also get Magus of the Moon or Phyrexian Revoker (cards they’ve tinkered with in the past) that Goblin Matron would not be able to get, but is not a Goblin for its tribal synergy purposes.

Honestly, I haven’t played enough Goblins to know if more redundancy is something it needs. But I thought it would be worth highlighting. However, going down the Goblins rabbit hole led me to a deck that may actually be a better fit..

Clearly, Imperial Recruiter pretty much gets everything in the Goblins deck, but I want to take this opportunity to highlight a specific interaction: Imperial Recruiter for Kiki-Jiki, Mirror Breaker, copy the Imperial Recruiter, the copy get combo piece X needed to make the kill or a hatebear such as Eidolon of Rhetoric, Skyclave Apparition or Scavenging Ooze to turn the tide of the game. Kiki-Chord has been a beloved fringe archetype in Modern for years now, and I wonder if this interaction means Imperial Recruiter may be good enough in there as well?

Above is the last Kiki-Chord list I saw Kiki-Chord master Kurusu (@kur15706654) posted.  Unfortunately you cannot recruit the other half of the combo (Restoration Angel) but it can get a lot of useful bullets.

Perhaps along that line, maybe a UR deck with the Kiki combo with Deceiver Exarch/Pestermite, and Magus of the Moon could be good too?

I had a ton of fun brainstorming and brewing around this addition.  I’m pretty excited that WotC is willing to push the envelope and print powerful but likely not game-breaking cards with Legacy pedigree like this.  And this is the type of card that will only get stronger with more sets (recall that Skyclave Apparition and Luminarch Aspirant are from last year!).  I hope you all are as excited for this card and the rest of Modern Horizons 2 previews as I am! Thanks for reading.