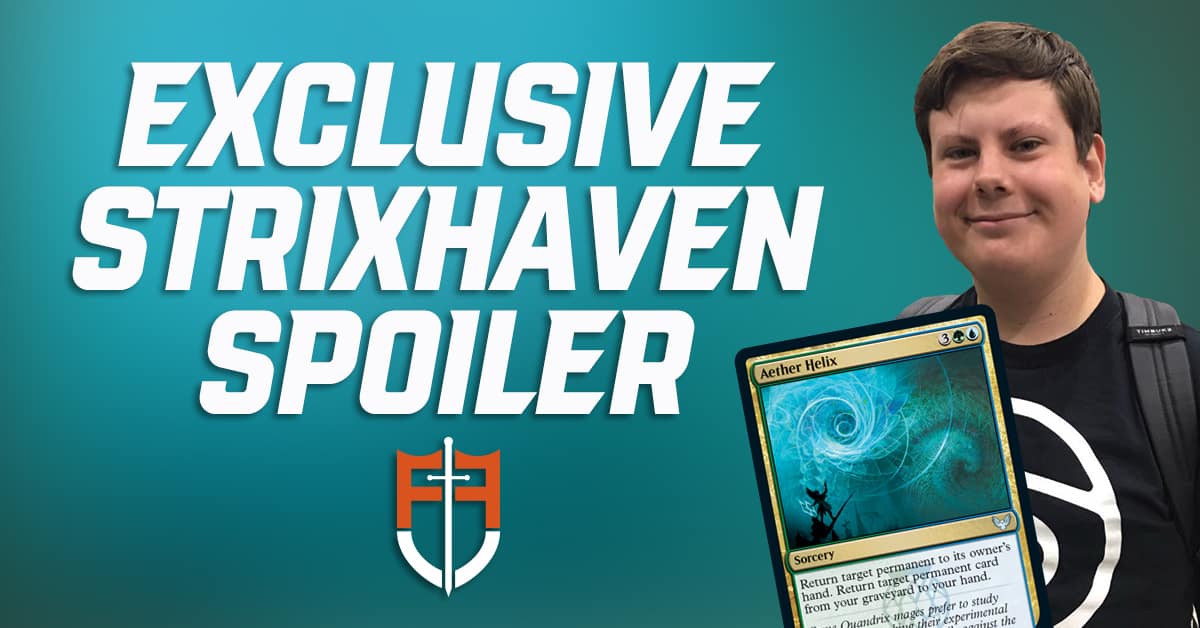 Strixhaven spoilers are in full swing and today I’m delighted to share a new card straight from the wonderful minds at Quandrix. Growing up I was definitely not the best at math (and was certainly not studying at twilight), but I was a member of my high school’s gardening club. Perhaps joining Quandrix will help me redeem my past mathematical failures. But without further ado, let’s get on to the spoiler.

With their powers combined nature and math come together to form: Aether Helix!

This card being five mana and a Sorcery means it probably won’t have any Standard implications for the time being, but I’m sure Aether Helix will be an above average Limited uncommon.

For five mana you get two effects: bouncing an opponent’s most potent permanent on the battlefield and returning a permanent card from your graveyard back to your hand. Now that’s value.

We’ve definitely seen similar effects printed on blue and green commons and uncommons of Limiteds past:

And not too long ago we had a somewhat similar effect in Kaldheim limited:

This is the first time we get an uncommon that lets us bounce a permanent on the battlefield back to its owner’s hand and return a permanent from our graveyard back to our hand. What are some of the ways you can use this to your advantage, you might ask?

Additionally, unlike similar printings of this effect, such as Regenesis, you only get to draw cards or bounce permanents, but not both. This makes for a versatile spell that you can change your targets based on whatever phase of the game you’re in. On average you’ll probably be returning one of your opponent’s permanents back to their hand from the battlefield, but some percent of the time you’ll be returning your own!

We also have to factor in that Aether Helix is a sorcery. If you’re on the draw against an aggressive deck that destroys one of your powerful blockers early on in the game, you get to rebuy that creature while putting a speed bump in your opponent’s hand. If you’re matched against a grindy deck, Aether Helix makes for a great card to sit on that can buy back a powerful creature or planeswalker card you may have opened. Anyways, I’ll stop before I go off on too much of a tangent.

That about sums things up. I’ll definitely be studying up on Strixhaven to prep for the upcoming Limited season. Thanks to Wizards for this awesome preview card!

PS: Did you catch all the math jokes in this article?