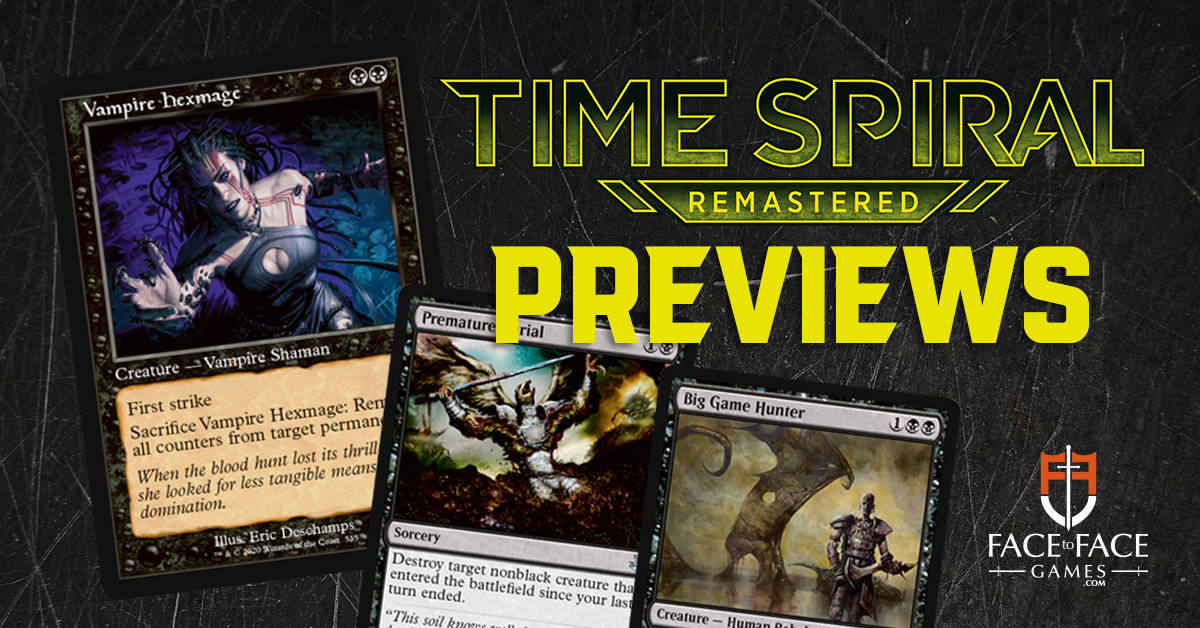 Hello friends, Finalnub here and I’m excited to bring to you all not one, not two, but three previews for Time Spiral Remastered for Face to Face Games!

Time Spiral initially evoked a lot of nostalgia and brought forth numerous now-iconic cards and Eternal format staples.  As a newer player to the game, my understanding is that the Time Spiral block was a truly unique, one-of-a-kind experience, so I’m excited to relive the excitement through the remastered edition!

What is pretty interesting to me is that the Time Spiral block has been regarded as some of the more complex and interesting sets across time due to all the returning mechanics.  As a recent converted fanatic of draft, I’ve seen that WOTC has done a fantastic job with great, replayable draft formats over the last few years, so I have high faith that WOTC has curated the set to be an exciting, unique draft experience!

Don’t be assuming that we’re only bringing you draft-calibre cards though! Read on and you’ll see a pretty good draft card, a key role-player in Modern’s past, and even a beloved Eternal staple..

First up is what could be a premium removal for draft. The timing and the nonblack restrictions could be punitive depending on the context of the set.  We’ll have to see which are the best colors and which colors have the best creatures in this draft format.  However, I don’t think the timing restriction is that bad.  I’d imagine that if you want to kill an early aggressive creature, you’ll get to cast this on curve, and if you need to kill a big bomb, then this will let you sometimes kill the threat and double-spell, which is attractive to me.  Seems like a quality draft uncommon to me.

Remember when the big game to be huntin’ was a huge plate of spaghetti? Big Game Hunter has seen intermittent play throughout Modern’s history, be it in a Birthing Pod-style package, an efficient way to vanquish the Eldrazi menace, or in the BR Hollow One (RIP Looting) decks’ sideboards as an ultra-efficient removal.

That’s not to diminish its potential in draft. A 3 mana Nekrataal for some of your opponent’s best creatures is no joke. I’d also love to see how much Madness synergy there will be in the format.

And for our third and final preview card…  a beloved Legacy staple, now in its glorious, Time Spiral frame!

Vampire Hexmage! This has been a defining pillar of Legacy for a long time and a big part of why Dark Depths is banned in Modern.  Its combo potential with Dark Depths is well-documented, but don’t overlook its ability to (almost) cleanly take out a planeswalker or brawl in combat!  It has quite the pedigree in Legacy, ranging from GB which Depths has been a competitive archetype for a long time, an old fan favourite and colorfully named Ice Station Zebra (Tin Fins + Depth comb), and recently noted Legacy crusher Negator77 took home the MTGO Legacy trophy crown with a very innovative “Rainbow” Depths (BUG with rainbow lands for permission, Stifle, and to turn off opposing Submerge)!  Just goes to show you that the Hexmage combo package is so lean and robust there’s room for creativity.

I’ve been gushing about this card in Constructed, but I’m also interested to see how good this card is going to be in draft! It’s a pretty respectable body on 2, but I’ll be keeping my eyes for any potential combos with its ability.

… And there you have it! Three interesting black preview cards of varying Constructed pedigree across Magic’s history, and draft potential.  I’m sure this’ll please the Depths fans as they get to add this gorgeous looking card.  Until next time, and happy drafting!