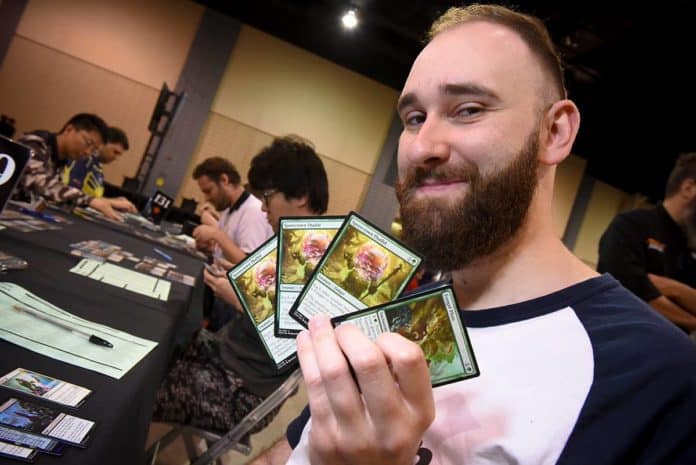 Preparing for Mythic Championship London has been quite an experience. Between having to test Modern with the London Mulligan rule, theorize what it means to deckbuild with open decklists in mind and find a way to get knowledge of a draft format you can’t play, it’s been something.

My Modern testing has been a mess, so I’ll skip that part and get right into War of the Spark Limited.

I’m not testing with teams anymore because life stuff stops me from being able to fly days in advance before Pro Tours (Mythic Championships) like I used to. I still had a plan to try and get as much knowledge as possible with my friends Maxime Aubin and Ulysse Gagnon-Paradis who were also flying to London to play the Limited Grand Prix.

The full spoiler went up Friday the 19th, our original plan was to print all the cards and create sample decks to play with, but logistically speaking, especially since we we’re just three, that was out of the question. We generated a few draft decks on simulators, played on Cockatrice, but nowhere near enough. We needed to find the most time efficient way to learn.

Tuesday the 23rd, I was going to have access to Best of 1 War of the Spark Sealed Decks for 24 hours on Arena as part of the streamer event. We played as much as possible to get a sense of the speed, interactions, synergies and color pairing. Then we spent the rest of the time left theorizing and building sample decks for each archetypes.

Unfortunately, we had to merge the two formats when theorizing because my friends were going to play sealed in the GP while I have to draft at the Mythic Championship.

It’s common knowledge that draft is usually faster than Sealed, decks are more streamlined and synergies are easier to accomplish. Keep that in mind while looking at the following sample decks. Those are there to show you what each color pairs are supposed to be doing realistically, using the most different cards possible, no rares and not too many tier one uncommons/commons.

Because Sealed does not give you as much selection, you’ll often have to splash in your two color decks, also keep that in mind.

The criteria to create these decks were as follows:

The sideboard section is just a bunch of other cards of the same colors, not necessarily good or bad, we just tried to push the synergy as much as possible while keeping the build “average”. 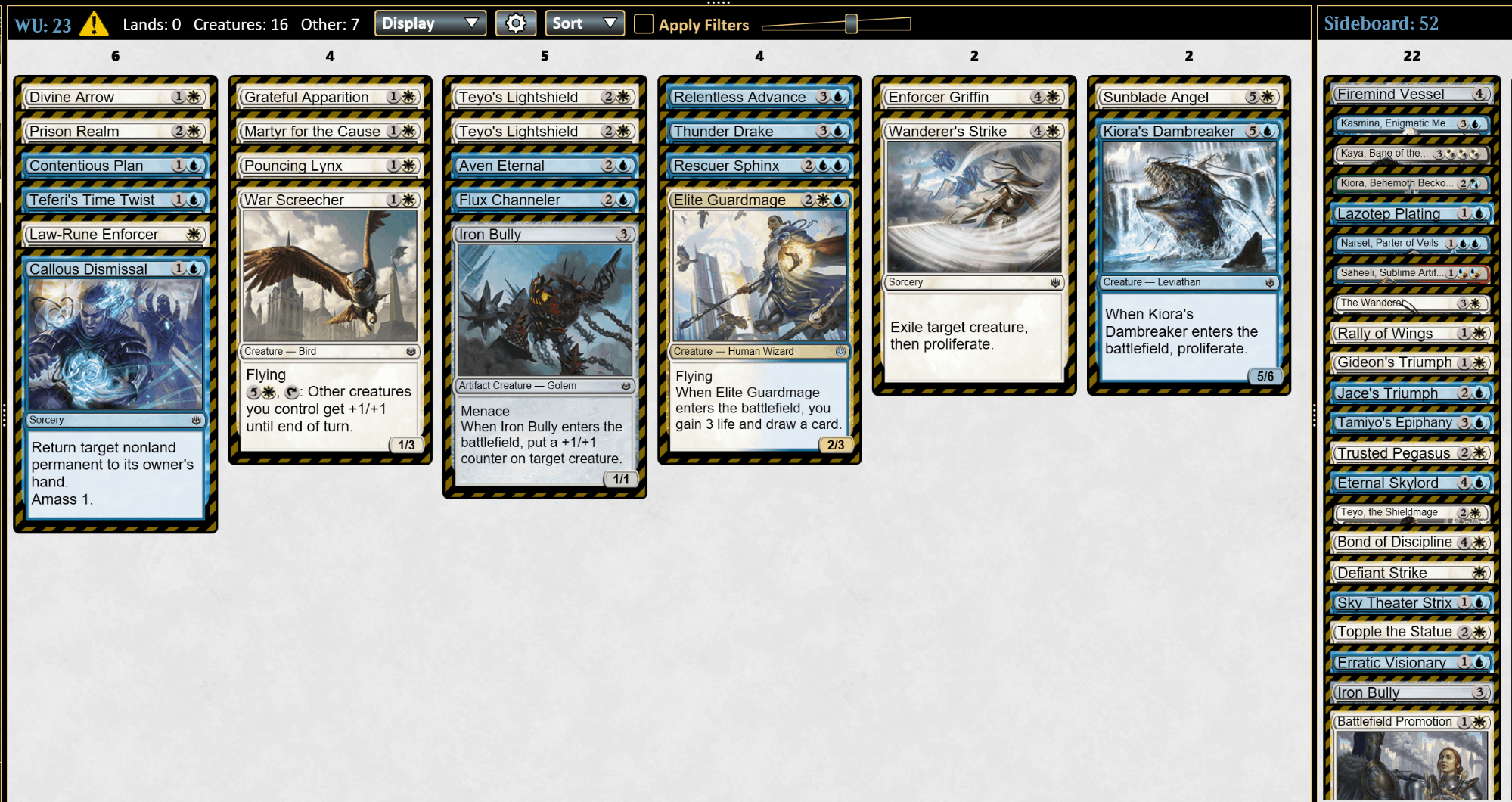 The synergies are very lackluster here, you’re going to have to play solid cards on their own and hopefully you can get some rares because the average deck as you can see is quite mediocre. 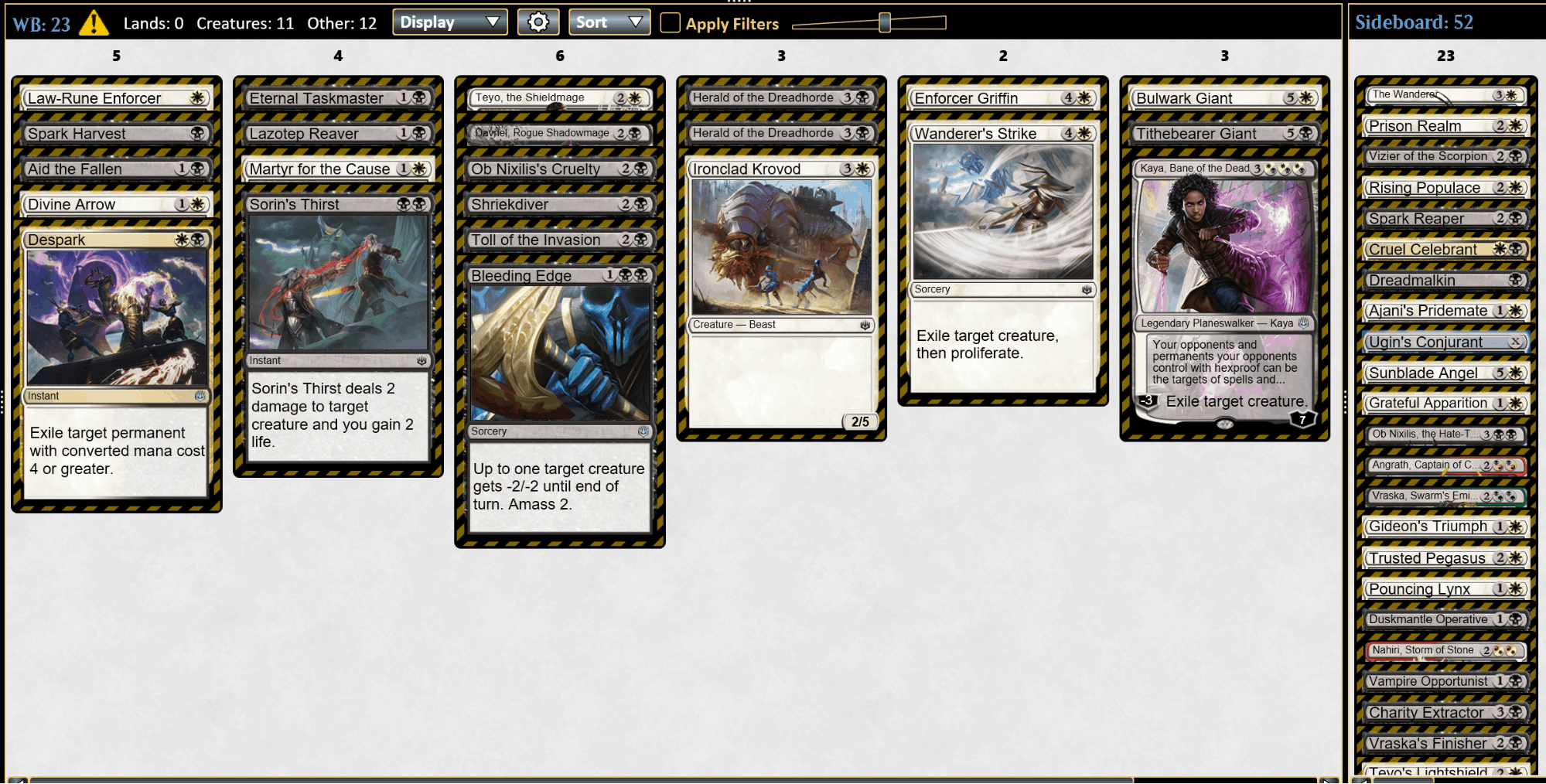 Again, not much synergy here, a bit of proliferate, but ultimately you’re trying to just two for one as much as possible, not die and win with stupid dumb creatures like Tithebearer Giant. Another color pair that very much needs rares to get there.

Finally a bit of synergy. Think of Heroic aggro back in Theros limited. Use pump spells and cycling cards like Defiant Strike, Blindblast to get the most of Burning Prophet, Spellgorger Weird and Tenth District Legionnaire. 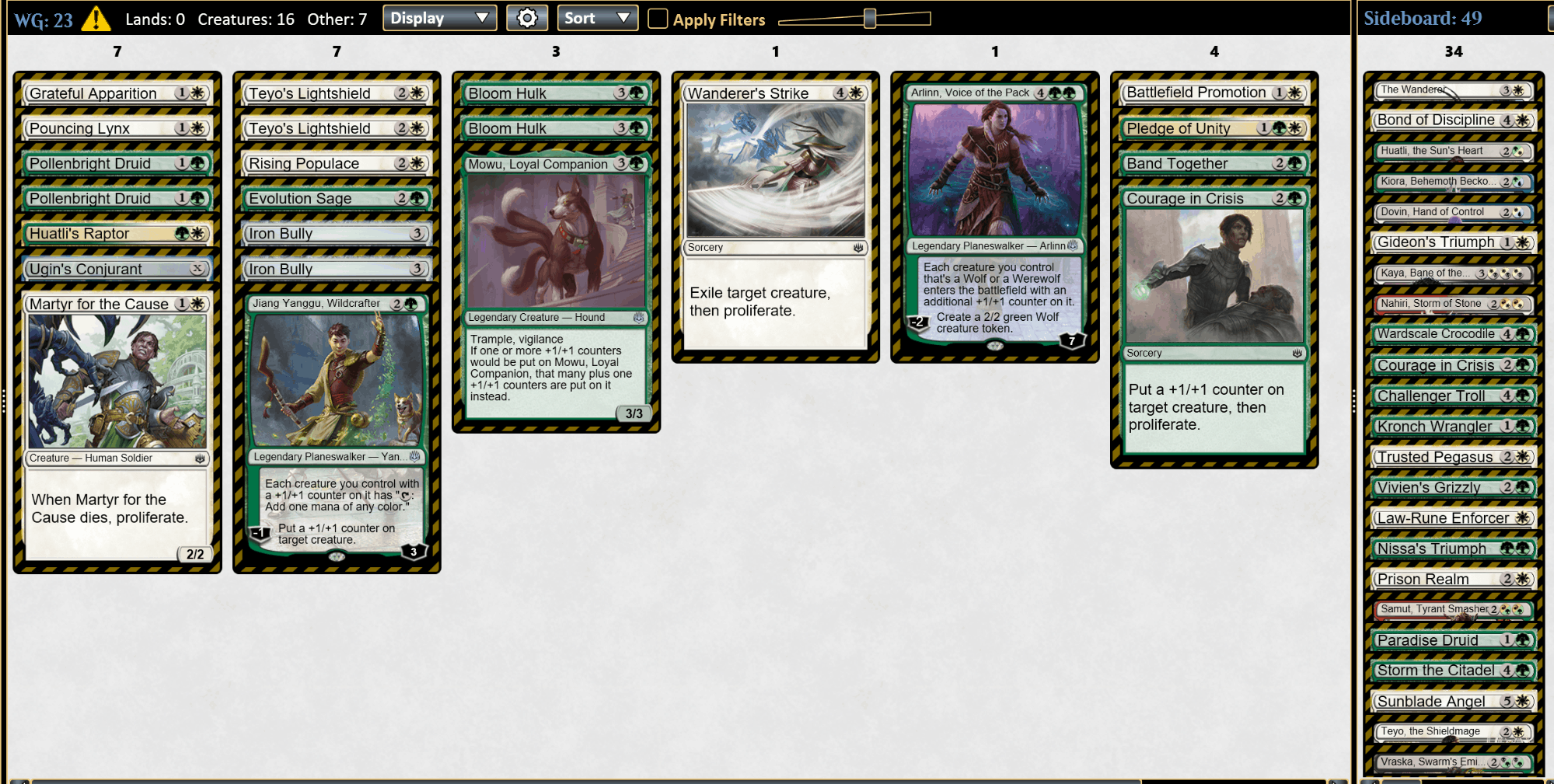 Likely the most synergy-based color pair in War of the Spark. Green and White pack the most proliferate and +1/+1 counters, so we’re using that as much as possible.

Play the least amount of vanilla creatures or any off-theme cards, we want to maximize proliferate. 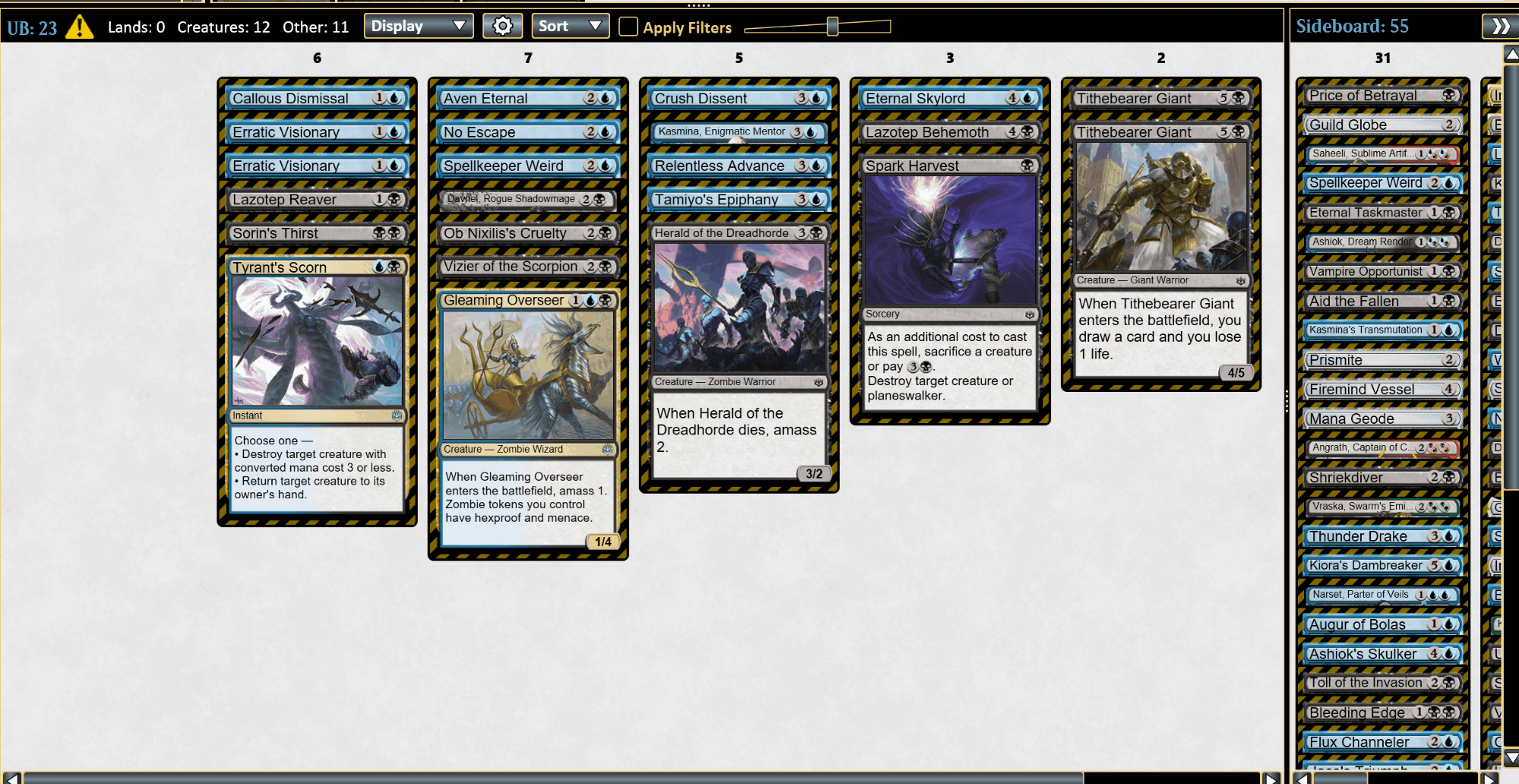 I think Blue and Black are the best and deepest colors in this set, they’re mostly great because all the cards don’t specifically require the synergy to work. That means most Blue/Black should be decent and you won’t run out of playables. 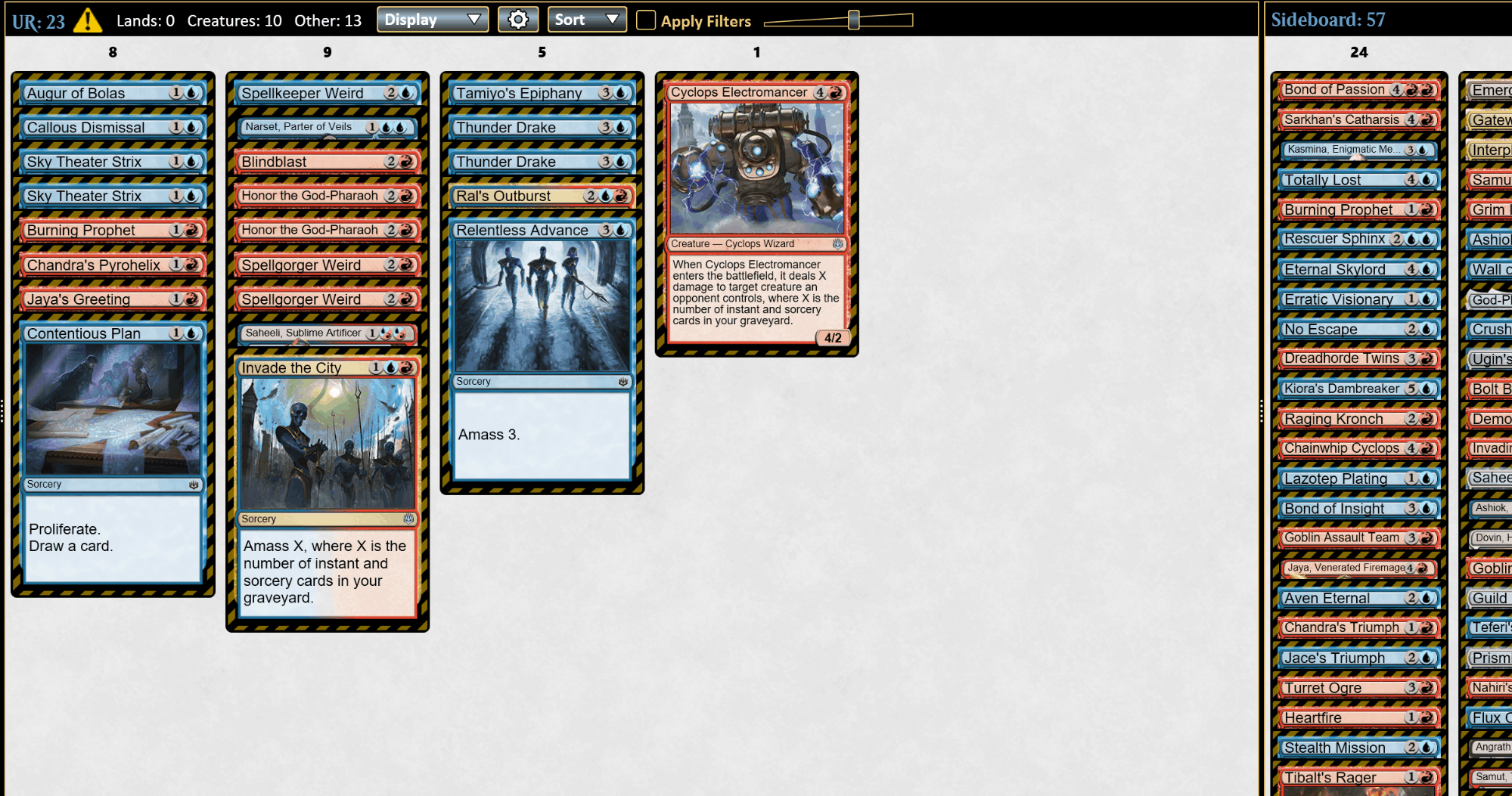 Spells, just like Blue/Red in almost every set. Spellgorger Weird is one of the best commons and it is amazing with blue cards. Make sure you have a good ratio of non-creature spells and creatures. 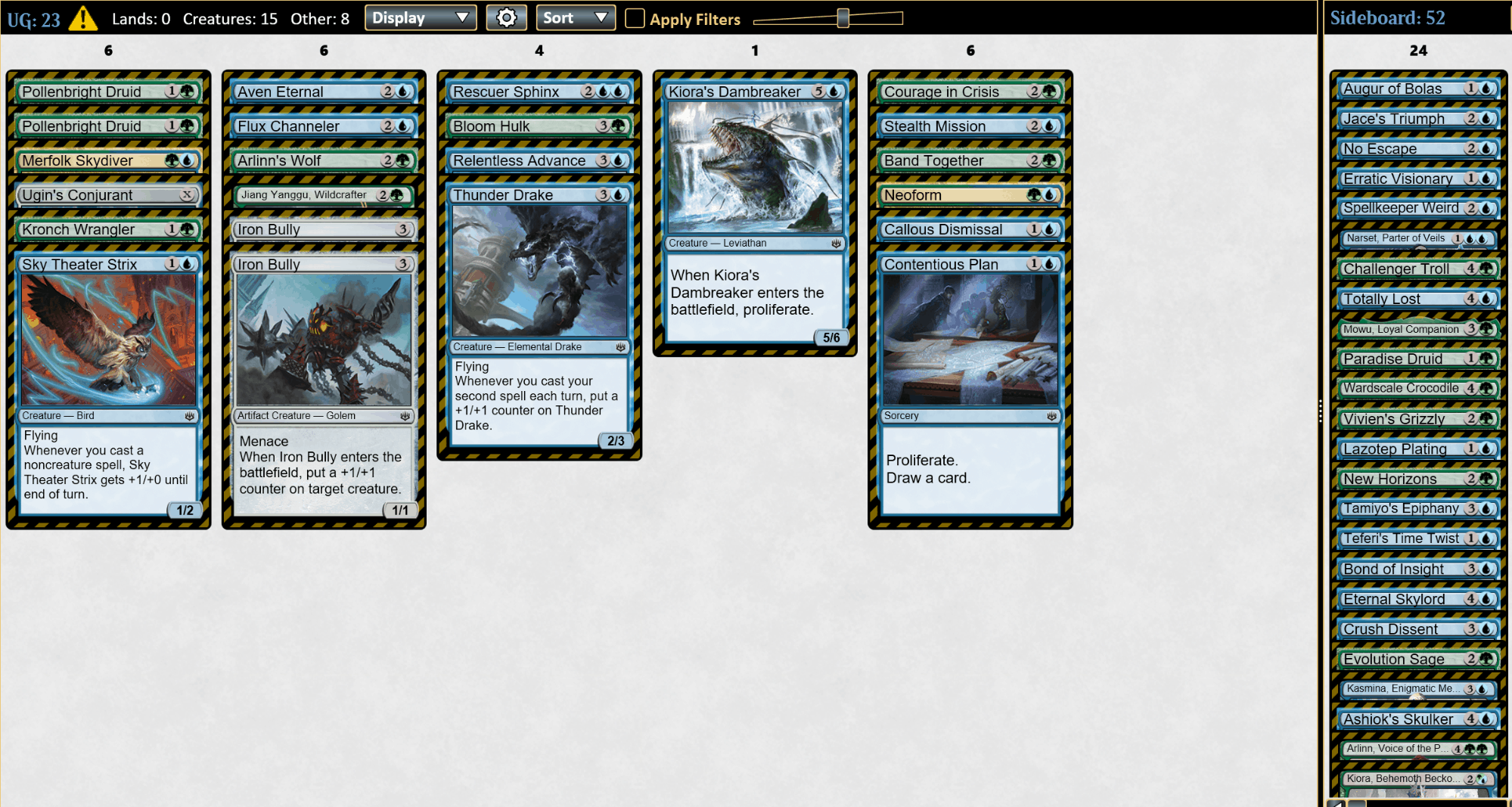 Very similar game plan as Green/White. A bit slower, but less one-dimensional as your cards offer evasion and versatility. Neoform is pretty cool with Iron Bully and Pollenbright Druid! 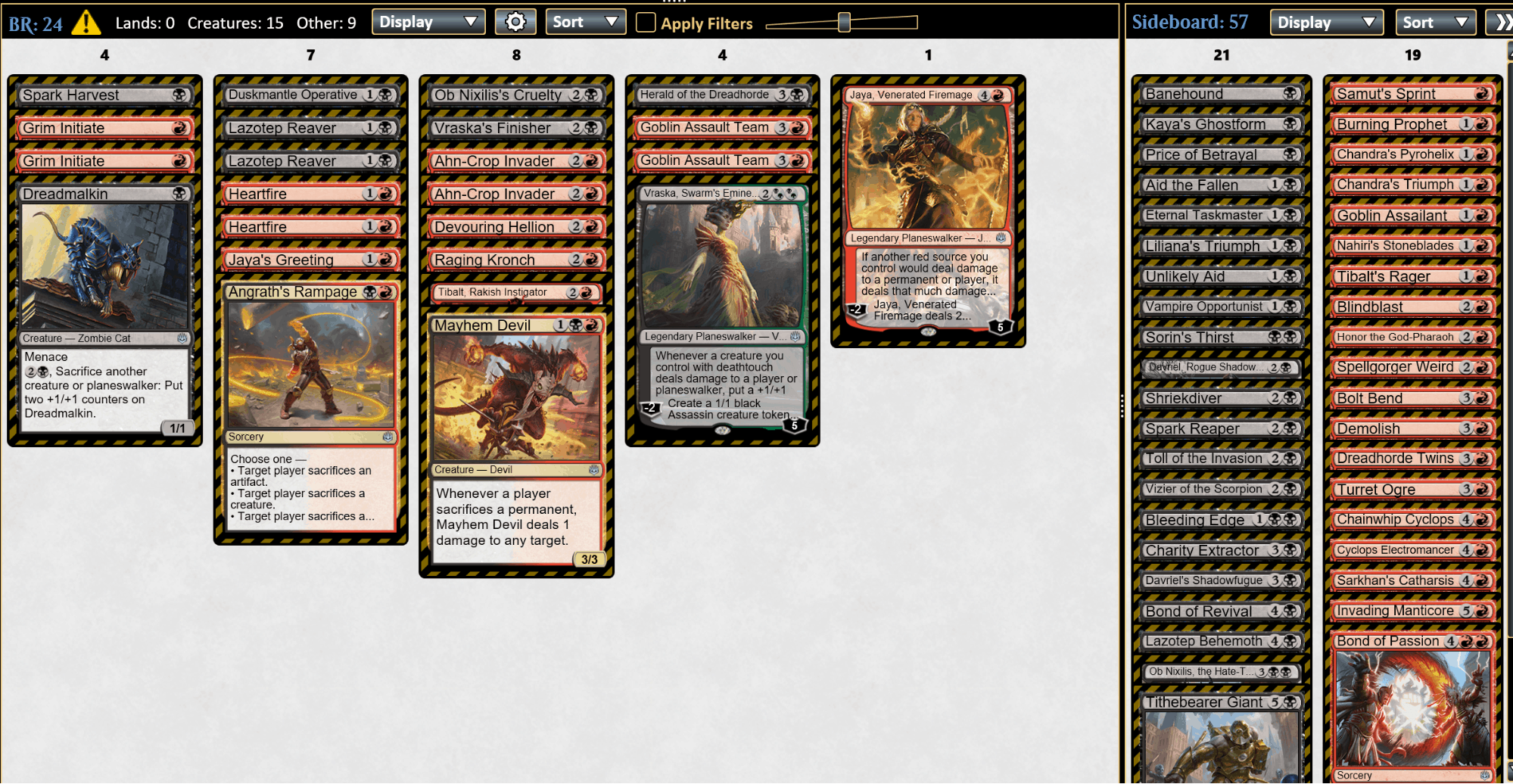 This has my vote for one of the best archetype that utilizes cards that are only good in this deck. That usually means in a draft you’d be able to assemble it very often. Heartfire is super efficient and this is one of the only deck that can play it without any trouble.

Whoa what are those Sliver Queens!? This is just to illustrate that this archetype will almost always splash and that it is its main strength. Removal, fixers and bombs. It doesn’t really matter which ones you use.

Kronch Wrangler and Raging Kronch is hell of a curve. This archetype is not particularly appealing outside of that honestly, but they are both commons so that doesn’t seem too harsh to find regularly.

On a scale from Meh to Great, I would rank the archetypes as follows:

We quickly ranked all cards within each colors. It can be read as follows: 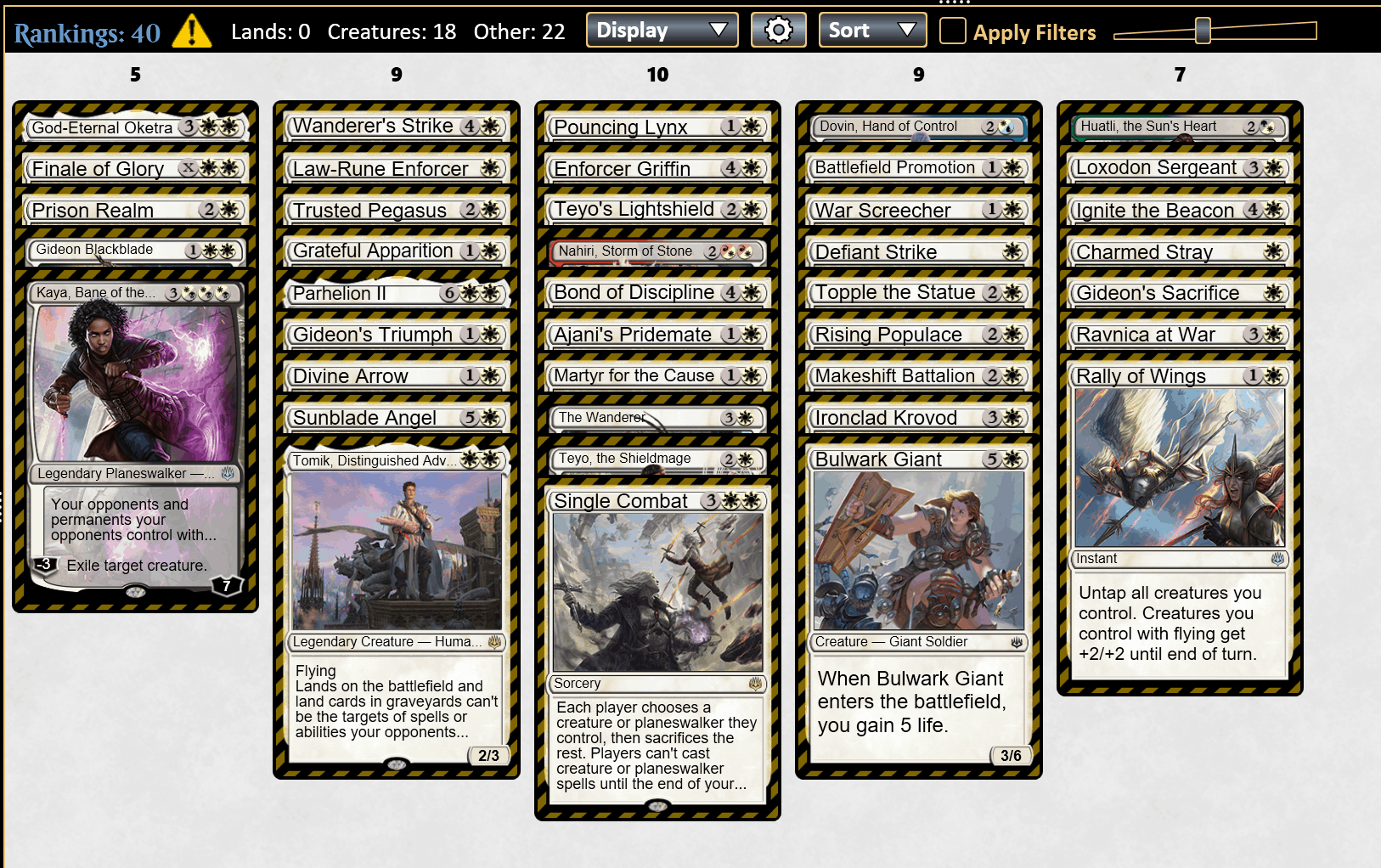 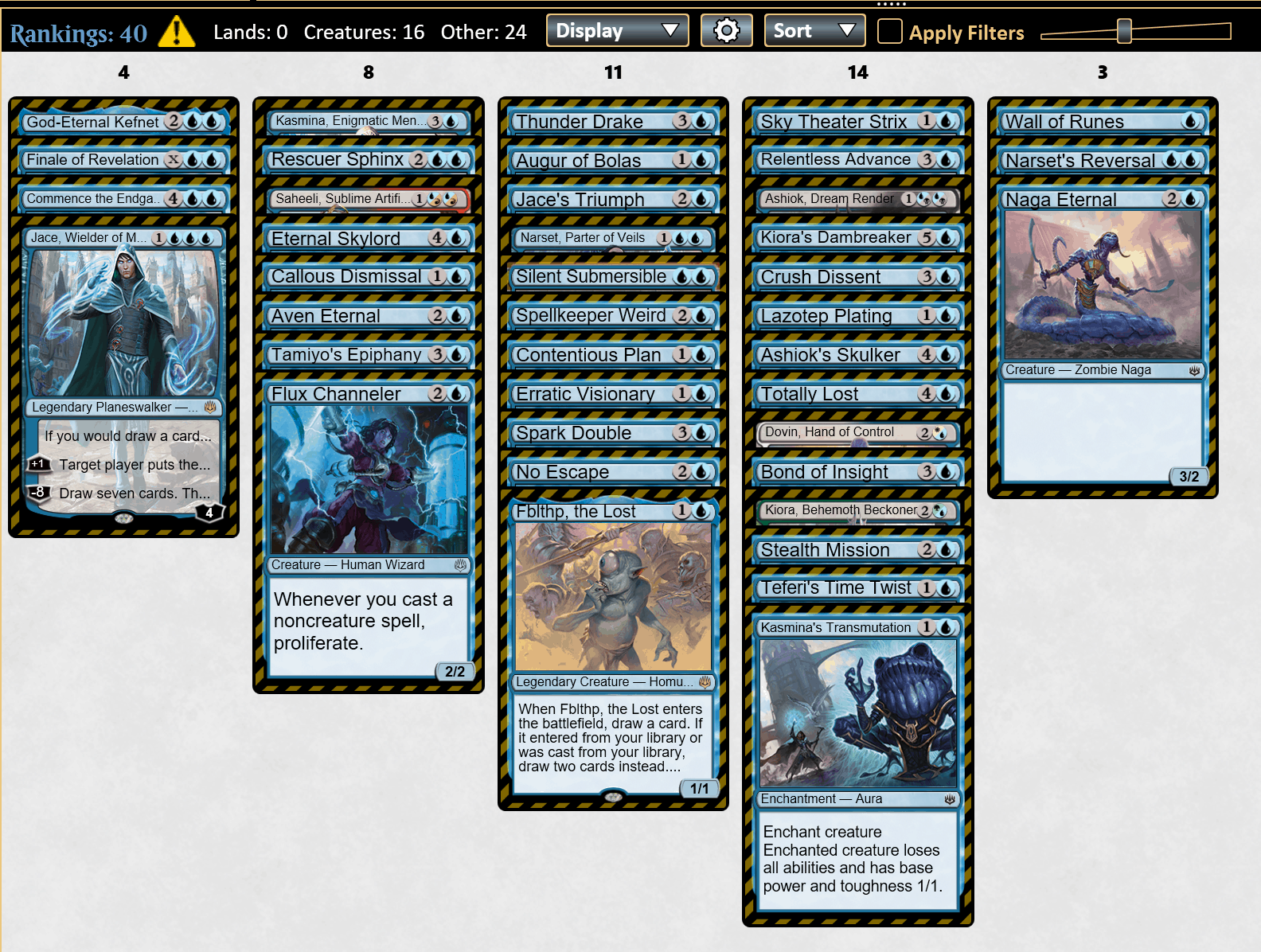 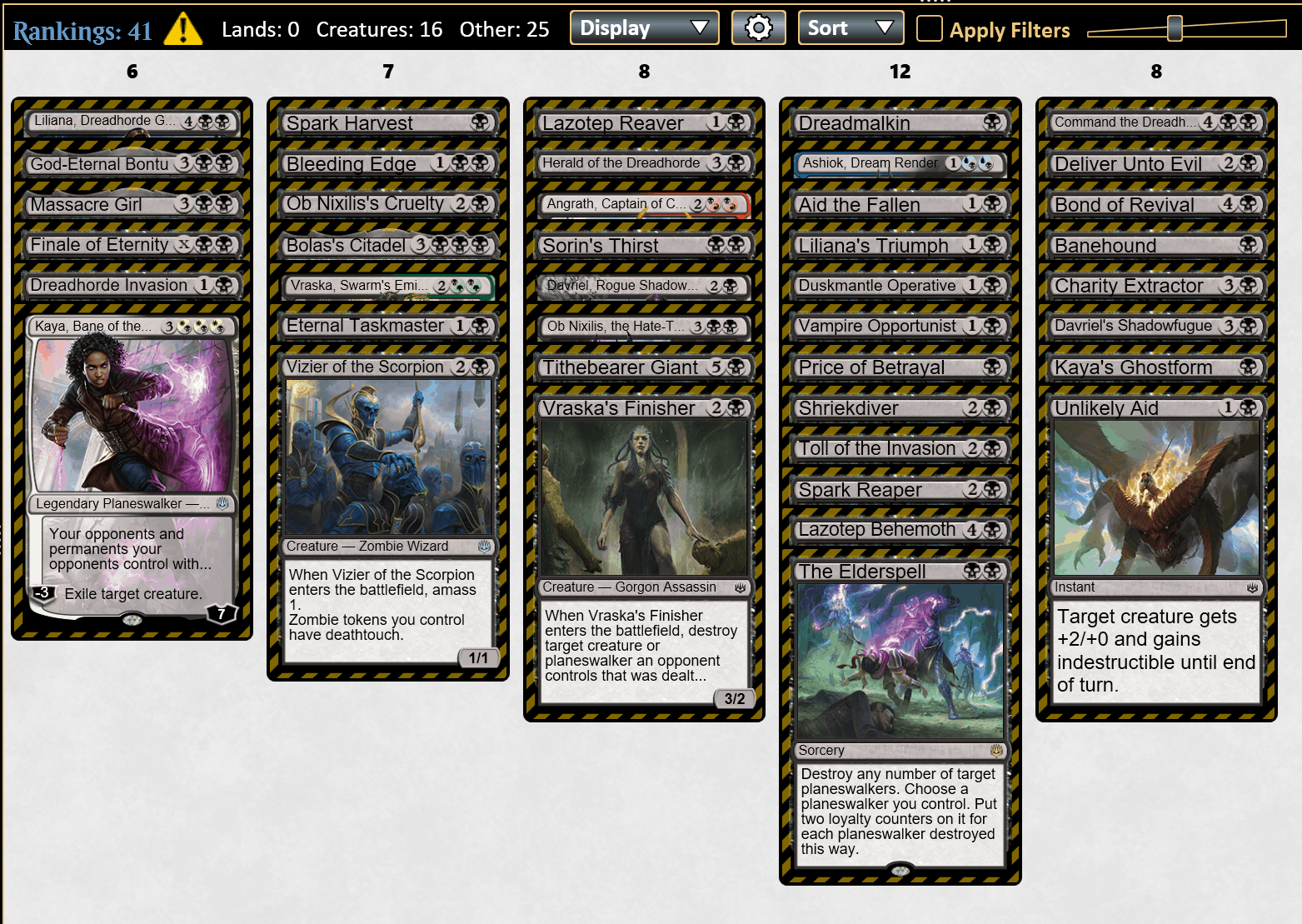 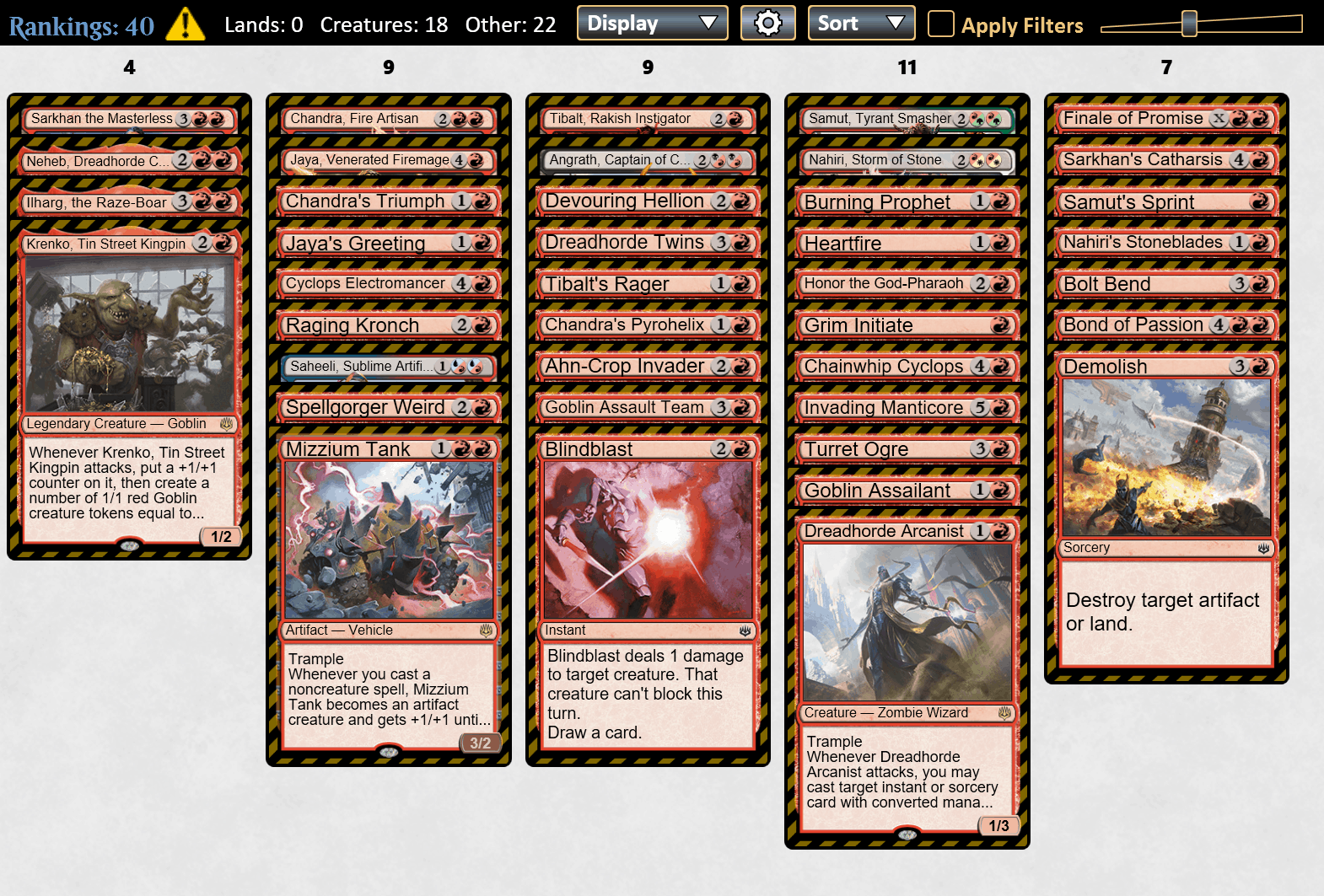 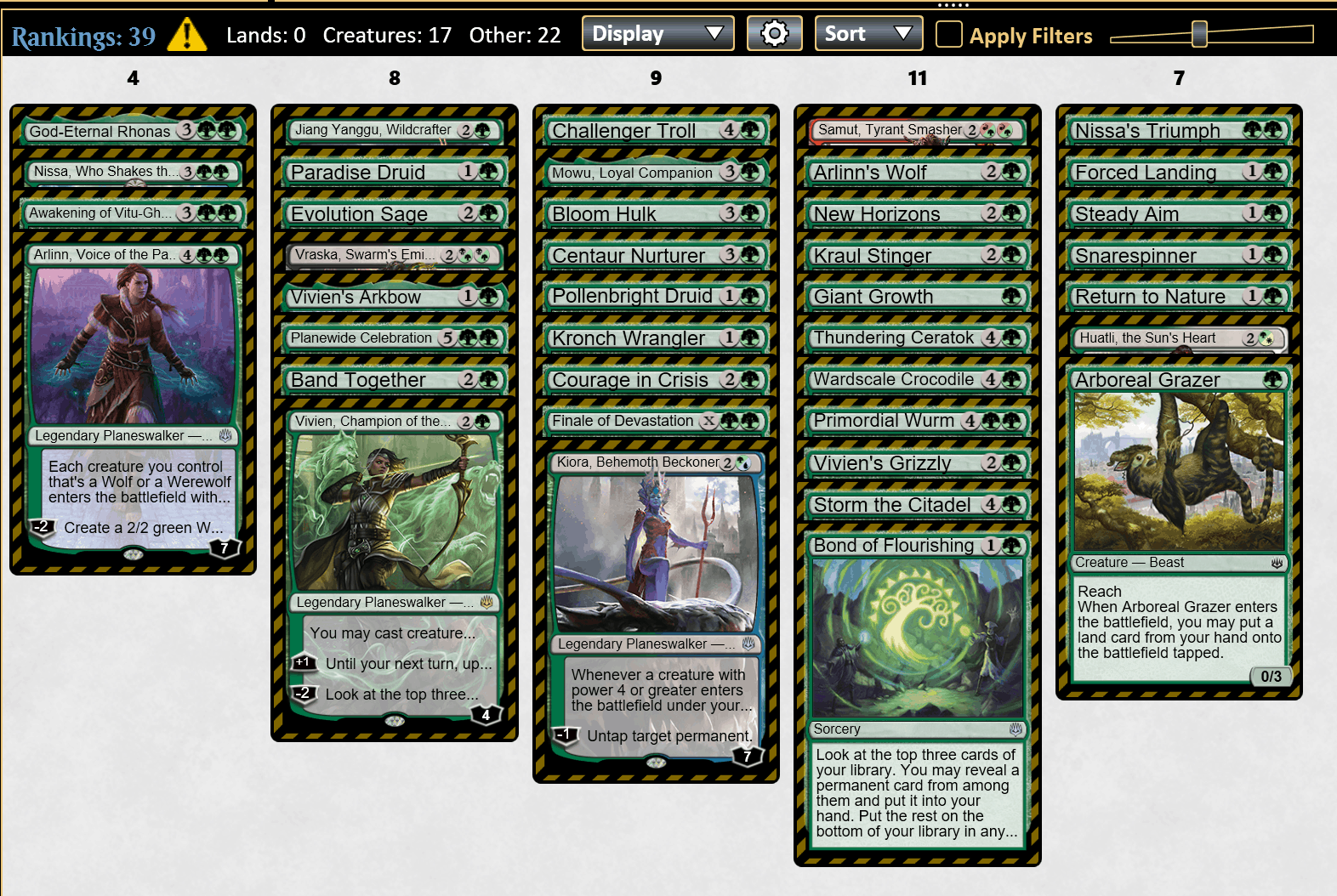 With all of this theorizing, rankings and synergies in mind, my final color ranking going into the Mythic Championship is:

Treat this lightly however, it is really important to keep yourself open. Be creative, the format is fairly slow, therefore splashing won’t get punished very often. Gateway Plaza, Mana Geode, Guild Globe and Prismite all at commons means you can do that easily if you need to.

Have a great Prerelease, Grand Prix or whatever limited you’re playing this weekend!