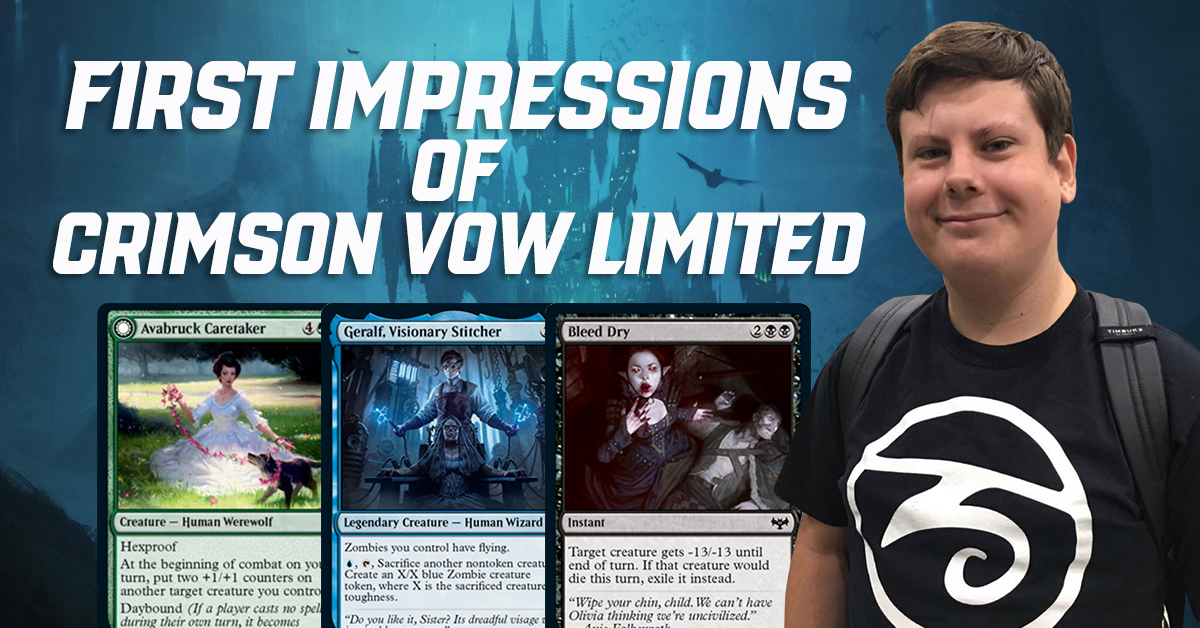 The sun is slowly setting on Midnight Hunt Limited. While we had a good two months of creating Decayed tokens and disturbing some spirits back to the battlefield, Crimson Vow is only a week away. That’s right, a week. With prerelease and MTG Las Vegas on the horizon it’s time to get down to business and do a deep dive of the Crimson Vow limited format.

Before going into specific cards or archetypes let’s first discuss the elephant in the room: the power level. Crimson Vow boasts a profane amount of powerful rares which clearly outclass even the best of the best from Midnight Hunt. These cards in particular are the ones that frighten me the most:

That’s…a lot of cards. I’m not equally scared of all of these cards, but I do think these are the rares that are the most powerful in the set for Limited. The majority of the rares listed here either have solid power/toughness for their mana cost, or they have an ungodly ability that can allow a player to quickly run away with a game.

Take Avabruck Caretaker for example – how does anyone go about beating this card on either side? Especially if you don’t have one of the few rare wraths in your pool. This card is going to lead to many uninteresting games of Limited where a mythic will decide the fate of the match.

It’s important to note that a lot of these rares can be dealt with with a timely removal spell or disenchant effect, but what’s bothersome to me is the amount of value that can be accrued by a number of these cards if left unchecked for even a turn or two.

Let’s look at Geralf, Visionary Stitcher. At face value Geralf is a decent blocker that gives your zombies evasion. What’s unnerving about his second ability, however, is the chance to make exceptionally large zombie tokens that can quickly fly over your opponent. Imagine your opponent gets just a single turn with Geralf while having an Unhallowed Phalanx in play. You’re left in an awkward position where you can’t kill the massive blocker in your way or the Geralf, because if you do your opponent gets to make a flying 13/13 whenever they please. This puts pressure on the player with the removal spell to sandbag it to potentially kill a 13/13 flyer while the other player gets to have an active Geralf in play. Talk about awkward.

The other issue with a lot of the cards listed here is that traditional removal doesn’t even turn the tide in your favor against many of them. Mirrorhall Mimic isn’t the most threatening card on its front half. It enters play as the best creature on the battlefield for four mana, quite a steal if you’re copying something worth four or more mana later into a game. However, the back side of Mirrorhall Mimic, Ghastly Mimicry, is where things get serious. For a Disturb cost of only five mana, you get to target ANY creature on the battlefield and get a token copy of it on each of your upkeeps. That’s some insane value, especially if the copied creature has a useful ETB or death trigger ability (spoiler: lots of cards in this set do). This makes playing cards that destroy enchantments more acceptable maindeck in this format.

While it can be easy to get bogged down in the power level of some of the rares in this set it’s crucial to talk about the answers we’ll be playing with in Crimson Vow Limited:

This is honestly a pretty big downgrade from Midnight Hunt Limited. In MID the majority of the removal was in Black, with the cards Eaten Alive, Defenestrate, Olivia’s Midnight Ambush, Infernal Grasp, and Foul Play at common and uncommon, with Bloodline Culling and The Meathook Massacre at rare and mythic. Black now only has three hard removal spells at common and uncommon, and their costs are three, four, and six mana. Bleed Dry is one of the best since it can exile creatures with Disturb before they become too much of a problem.

While there are a number of cards listed here there’s one overarching issue I see with the removal in this set: limited access to ‘hard’ removal. By hard removal I’m referring to cards like Bleed Dry, that permanently remove a creature from the battlefield, and in some cases from the game entirely. The pressing issue with Crimson Vow’s removal suite is the limited access to these types of cards. Too many cards listed here deal damage as a form of removal, which can easily get countered by a pump spell or various other tricks. There are other cards in the set that deal with some of the Disturb rares by exiling cards from the graveyard, similar to Diregraf Horde from the last set. However, upon first glance I’m left wondering how easily some of the more powerful rares will be able to remove.

Thinking about Midnight Hunt Limited, there weren’t an exceptional number of threats that could easily run away with the game. Tovolar’s Huntmaster and Consuming Blob were two rares that if left unchecked could run away with the game, but because of the variety of removal in MID they could usually be managed. Don’t get me wrong, I’ve lost my fair share of games to both of these cards and others, but I did feel like this prompted me to sideboard and manage my removal/counterspells better in my best of three matches. I will say in my one sealed event where I had The Meathook Massacre, the games didn’t feel close to being fair.

While I don’t want to be downtrodden about an upcoming set I’m a believer that the best offense is a good defense. It will take time playing with the cards and finding meaningful interactions that can easily be missed on a first glance of the set. I know for a fact I don’t want to sit across from someone with Avabruck Caretaker at MTG Las Vegas, a sentiment shared by a multitude of players already. What I do want to find out by playing the set is how often I should be playing cards like Crushing Canopy maindeck, or how highly I need to be picking Bleed Dry.

Taking a step back from the set as a whole I want to take a quick look at the two-colored archetypes key uncommons from this set. This will give us an idea about how to draft the set or what card combos we might come across when constructing our Sealed decks.

To round things up let’s briefly touch on some things to note about the new mechanics in Crimson Vow: Exploit, Blood tokens, Training, and Cleave.

Blood tokens, similar to Clues, Food, and Treasures, provide value in a number of ways. One aspect about Blood tokens that I really like is how they can help you rummage away extra lands in Sealed. Mitigating mana flood seems incredibly useful in Sealed, especially if the format turns out to be really grindy. There are also a slew of cards in Vow that have abilities based on the number of Blood tokens you have.

Exploit returns after its last appearance in Dragons of Tarkir. Similar to that format, decks with Exploit creatures gained value off of creatures with solid ETB or death trigger abilities. While we don’t have Decayed tokens anymore, there are a number of cards that make Vampire or Zombie tokens that will be easy to exploit. It’ll be key to look out for a number of creatures with these sorts of abilities if you open or draft a deck with multiple Exploit creatures.

Training brings us a new mechanic for White and Green that involves combat. Training seems like a great mechanic in Draft but less good in a grindy format like Sealed. Since Training involves going to combat it’ll be harder to Train if your opponent has a gummed up board or open mana for a trick or removal spell. There are some cards that can work around your opponent’s blockers though:

Cards like these will be vital to Training decks. You’ll need ways to push through in combat to maximize the power and toughness of your creatures.

There’s not much to talk about with Cleave. I like the versatility of the cards, such as Dig Up, which can help you find your missing color or lands if needed early in the game and then find your bombs late in the game. Usually with these cards you’ll want to put off playing the lesser cost of the spell first and instead sandbag it to cast the Cleave version later on.

Crimson Vow is quite the deviation from Midnight Hunt. In Midnight Hunt we had an interesting format where the bombs weren’t as impactful due to the variety of removal spells in the format, but the format was also skewed to Black and Blue decks due to the power level of the cards. Crimson Vow gives us a format with a variety of bomb rares that may be hard to interact with, given the amount of removal at our dispense.

On a first glance I’m going to be picking cards like Bleed Dry fairly highly due to its ability to remove threats permanently from the game, such as Edgar, Disturb creatures, etc. I’m curious as to how many Disenchant effects you may want to be playing maindeck in both Draft and Sealed due to the power level of some of the Disturb rares. With Crimson Vow’s release on Arena on Thursday and subsequent prerelease events I’ll be looking forward to how the set plays out to see what lessons can be learned with MTG Las Vegas steadily approaching.