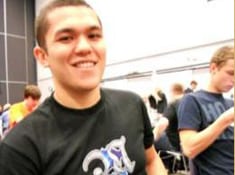 With Innistrad at our doorstep, Magic players have a lot to look forward to. Innistrad is shaping up to be one of the best looking sets for limited in quite a long time. The flavor is just unreal, and I for one am really looking forward to howling every time I transform a werewolf or am beating down with zombie hordes. I’m really sick of Standard at the moment and am looking forward to the new set shaking things up.

One card that has really caught my eye from the new set is [card]Forbidden Alchemy[/card]. Essentially the card is similar to [card]Impulse[/card] but that costs 1 more, has flashback and the cards are sent to the graveyard as oppose to the bottom of your library. First of all, the implications of having an [card]Impulse[/card] is that it allows you to search for different things in different stages of the game depending on what you need at the time. Early in the game you can use it to search for lands, later in the game it can be used to dig for threats and if your opponent has a permanent you need to deal with it can help you find the answer.

Second of all, having flashback is sick value. Even though the flashback cost is a little steep at 7 mana, the fact that you are getting more value from it later is still great. Similarly, [card]Firebolt[/card] was just average at the regular cost, and the flashback cost was somewhat pricey, but that was an amazing card and a Standard and Extended staple, for a large span of time because of the value you got out of it. I believe [card]Forbidden Alchemy[/card] will be a great card for the same reasons.

Being instant is another key factor in what makes this card great. As an Instant, you can keep your mana up and slow roll it, casting it later on once you have more information and know what you need out of your deck. For example, if your opponent plays a spell you need to counter, you can use [card]Forbidden Alchemy[/card] to dig for the counter spell needed in response.

Here are two deck that benefit from Forbidden Alchemy:

This is very similar to an old school draw-go deck. The main idea being that you don’t play spells on your turn, you play almost every spell you have on your opponent’s turn, and you try to deal with anything your opponent might throw at you.

Here is a breakdown of a few of the key cards:

[card]Forbidden Alchemy[/card] fits like a glove in this deck because it is an Instant, it helps you search for answers and it’s great value. [card]Think Twice[/card] similarly gives you great value, and allows you to keep your mana open and use it on your opponent’s end step. This is the perfect fit for Tiago Chan’s invitational card. In this deck, [card]Snapcater Mage[/card] can be a [card]Mystic Snake[/card], [card]Nekrataal[/card] with flash or a pseudo [card]Tidehollow Sculler[/card]. Not only does it do all of these things, but it’s also great as a surprise blocker for defense or early pressure against other control decks.

The black titan fits great in this deck because it is great at putting on pressure if you want to finish off an opponent quickly or can provide lots of blockers on the defense. [card]Grave Titan[/card] may not have flash, but the hope is that by the time you play it, your opponent has been so whittled down that they cannot put up much resistance to the titan.

The second deck is:

This is an updated version of an old classic. In Solar Flare’s debut, the plan was to dump fatties like [card]Angel of Despair[/card] in to the graveyard and then recur them with cards like [card]Zombify[/card]. The main cards that validate this strategy again are [card]Unburial Rites[/card] and the cards that enable you to dump fatties in to your graveyard.

Here’s a breakdown of a few of the key cards:

This card is the backbone of the deck and the card that really makes Solar Flare come together again. [card]Zombify[/card] was good enough to make the cut back in the day, and this card is essentially 2 [card]Zombify[/card]s in 1 card. The main targets are [card]Grave Titan[/card], [card]Sphinx of Uthuun[/card] and [card]Jin-Gitaxias, Core Augur[/card]. These targets are fairly interchangeable depending on what the format look like. For example, if there are a lot of creature decks, then [card]Elesh Norn, Grand Cenobite[/card] could be great, or if there are a lot of burn decks, then you could want [card]Wurmcoil Engine[/card].

In this deck [card]Forbidden Alchemy[/card] gives you the same benefits you gained from the previous UB control deck but you have [card]Unburial Ritual[/card] for additional flashback goodness and you also gain value by being able to dump the fatties in to your graveyard for [card]Unburied Ritual[/card]. Liliana makes a good fit in this deck for both her ability to kill creatures, and enable you to discard cards. Liliana enables you to dump fatties in to the graveyard for [card]Unburial Rites[/card] if needed, and can also dump cards with flashback in to the graveyard that you don’t mind discarding.

I chose to include [card]Grave Titan[/card] for the same reasons that it’s strong in the UB control deck. It’s great aggressively, defensively, and it’s always good value.

[card]Jin-Gitaxias, Core Augur[/card] made the cut because of it’s ability to end the game on the spot against opposing control deck if left un-answered.

That’s all I’ve got for you today. Hopefully this helped get your creative juices flowing. Feel free to try out both of these standard brews. I have a feeling that they both have potential to be strong standard decks in one form or another. As always, thanks for reading! Enjoy the pre-release this weekend, and happy brewing!