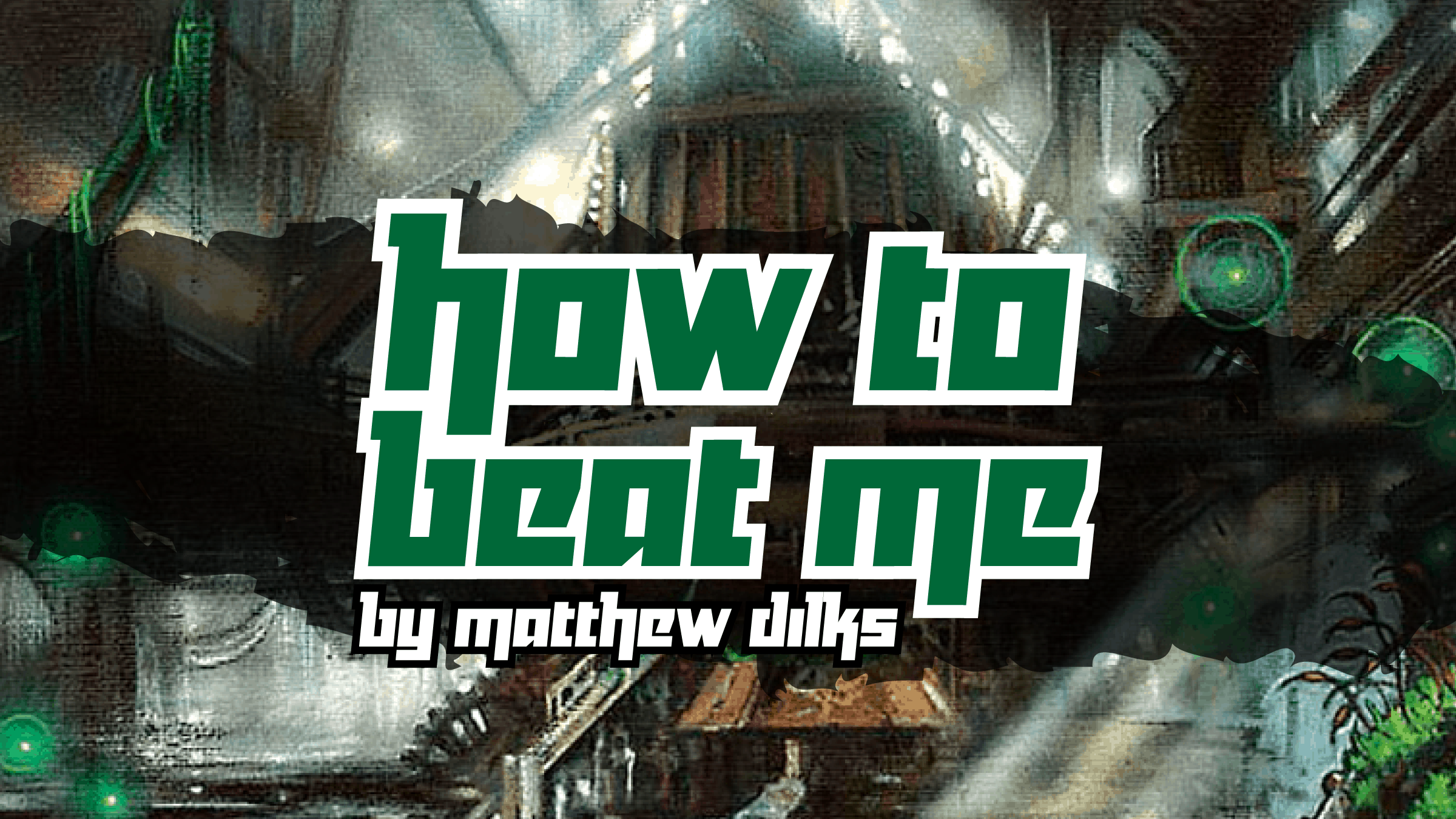 This past weekend Edgar Magalhaes, Tariq Patel and I finished in the top four of the team StarCityGames Open in Cincinnati, Ohio.  For people reading that don’t know me, I am competitive magic player out of the GTA and I specialize in the Legacy format.  I have a bunch of solid finishes on the SCG Tour and at the GP level mostly being in Legacy with my deck of choice: R/G Combo Lands.

Over the past year, I’ve won two Legacy Sunday Showdowns, the Ultimate Showdown, one Modern Showdown and a Modern Face to Face Games Open. I also haven’t missed the Top 8 of Face to Face Games Toronto Legacy event in over a year.

For my first article I’m going to highlight some things you can use to level-up your Legacy game and what kind of holes I see in the Legacy meta in Toronto.  I’ll try to give you some insight on some of the common mistakes players make against me in Legacy, and of course — tell you how to beat me. I’m not going to go too deep on Lands just yet, that will be in a later article, but for now I’ll just brush the surface.

Be willing to learn and seek out good information:

This seems like a lame reason but if you’re not open to learning and being incorrect about your current thought process there is no point in continuing.  I think this is a problem not unique to the Legacy scene, but is pretty common among Legacy players. Legacy players tend to have played this game for a long time and get bad habits ingrained into their thinking.

In contrast, Standard and Limited is where new players enter Magic and are more of a blank slate for learning. Many enfranchised magic players are guilty of being closed-minded, we think we know better because we have played for so long but things change.  I think I miss read a card at every pre-release for this reason.

I think the difficulty behind finding information also contributes to this problem. So many sites are full of information, decklists and primers that are out of date. The posts are derived out of bad information.  The true masters of this format don’t really write articles and until this year, with Legacy being a factor at the Pro Tour, pros have largely ignored the format.

In fact when the Legacy masters decide to make a splash they can impact the hive mind in a big way, just look what happened last year with the whole Popeye Stompy hype.  Imagine if they put the time in to update primers and decklists and squash a bunch of misconception.

It’s for this reason that Legacy is format best learned through careful practice and experimentation. Success is largely the result of mastering your deck on your own rather than just taking a list from MTGO and tinkering with it. You shouldn’t be afraid to try things just because you don’t see them in online decklist, because the reality is that there just aren’t that many good players experimenting with Legacy decks.

Know your role and have a plan:

Again this seems like basic fundamentals, but this is the type of thing people mess up all the time in Legacy.  Practice and study makes perfect. Just slinging Deathrite, Force of Will and Brainstorm is only get you so far.  You have so much power and control over your game at your fingertips it would be foolish to squander it.

For example, I play R/G Lands and I understand lands is not a common deck and likely difficult to find good testing.  I give the people in my play-group a huge advantage because they get to formulate good plans against Lands. Lands is a tricky deck and I think some people just don’t see everything coming and what the deck is capable of. I can’t tell you the number of times my opponent has targeted my Loam with Surgical Extraction only for me to Dredge in response with a cycle land.

This goes for every deck in the format, there is such a vast card pool, literally the entire existence of Magic.  People can and will play everything, I would start with the top ten decks in the format and really get those down, expand to any of the outliers you see in your local store. With time you will know the subtle nuances and can change your game plan on the fly, that’s when you know you are really understanding the format.

Be prepared be creative:

This is a numbers consideration in most cases and largely branches from my previous point.  You have to be prepared for any match-up and make sure you build your sideboard properly. Once you know you have good sideboard cards for a given match-up be sure you know how to use them.

For example, I find that people use Surgical Extraction poorly against me all the time. They need to know when to respect a cycle land and when to go for it. Additionally, the end all be all isn’t always to land your Surgical on my Life from the Loams. Often you should be targeting the other utility lands and closing out the game before losing to the late-game Loam-engine.

Once you know how to build and use your sideboard, it is the time to innovate and bring something new to catch people off guard. If you always just take the latest 75 from wherever you get your decklist it become child’s play for a seasoned Legacy to play around everything you could have. Again this goes back to my previous point, Magic has been around for a long time and you have access to all those cards in Legacy. Keep your opponents guessing and don’t be afraid to bluff and take advantage of what cards other people play.

A great example of both these points happened in Cincinnati last weekend. I was playing a swiss match at the SCG Open against the eventual winners. I was playing around Diabolic Edict and got blown out by a lethal Price of Progress. My opponent was Joe Bernal on Grixis Delver with three Underground Sea. I expect this build to be on Diabolic Edict due to the heavy-black commitment over the normal red.

I found out during our semifinal match that he had no Edicts and one Price of Progress when I saw his deck list. Price of Progress is a card Grixis has been going to lately but it is less likely for the black heavy version to have. The slip-up in the swiss cost us the match and almost cost us the Top 8. Goes to show you can still catch people by shaking things up.

This has to be the most underrepresented macro archetype in the Toronto Legacy scene.  I’d even expand that statement to be true over most large Legacy tournaments. This is actually why I decided to cut most of my cards for combo and make sure I win every fair match-up I got in Cincinnati at the team event.  I still lost to Delver, but my two most lopsided loses were to Omniscience Sneak & Show, this is a near impossible match-up because Omniscience blows any chance of winning through a Show and Tell out of the water.

I think the most attractive part of Legacy is playing fair decks for a lot of people because they tend to lead to a lot of interesting games. If people started to pick up Sneak & Show and Storm it would be much tougher for all the none-Force of Will fair decks to maintain consistent win percentages. For me, combo decks are some of lands worse match-ups and I would struggle to put up the numbers that I have been able to achieve in the face of a larger percentage of competent combo players.

With that said, combo decks tend to have a tough-go in the format right now, Grixis Delver is starting to reach the metagame percentage I would expect from its power level. I think it’s just by far the best deck in the format.

Understand it may not matter:

Magic is hard and variance happens.  Sometimes you can do all this prep, have a great sideboard and sideboard plan and still not quite get there.  Legacy decks can be so powerful that they just do there powerful thing too fast and no amount of hate cards will save you.

Here is an example from this weekend:

In our top 8 match I am paired against Mono-Red Prison and am expected by coverage to lose.  I only have one Molten Vortex to win with through a Blood Moon and there are many other permanents in that deck that I would struggle with even with a fast Marit Lage, like Ensnaring Bridge.  Luckily for me his only play was Magus of the Moon and I was able to set up Dark Depths plus Punishing Fire to make a 20/20 on turn-three to steal the game.

After sideboard I had Krosan Grip to answer Blood Moon and Tireless Tracker to play through it.  I ended up winning with double Tracker and Karakas bouncing a Hazoret a couple times. Weird things can happen and that’s why we play the games out.

I think this past weekend was great, and was a great trial run for the future team events.  I look forward to the next time I get to sling some Wastelands in Seattle, hoping to improve on my previous Grand Prix finishes.  No promises but look out for some deep-dive articles on Lands, show your support and my editor will have to bug me to do it.