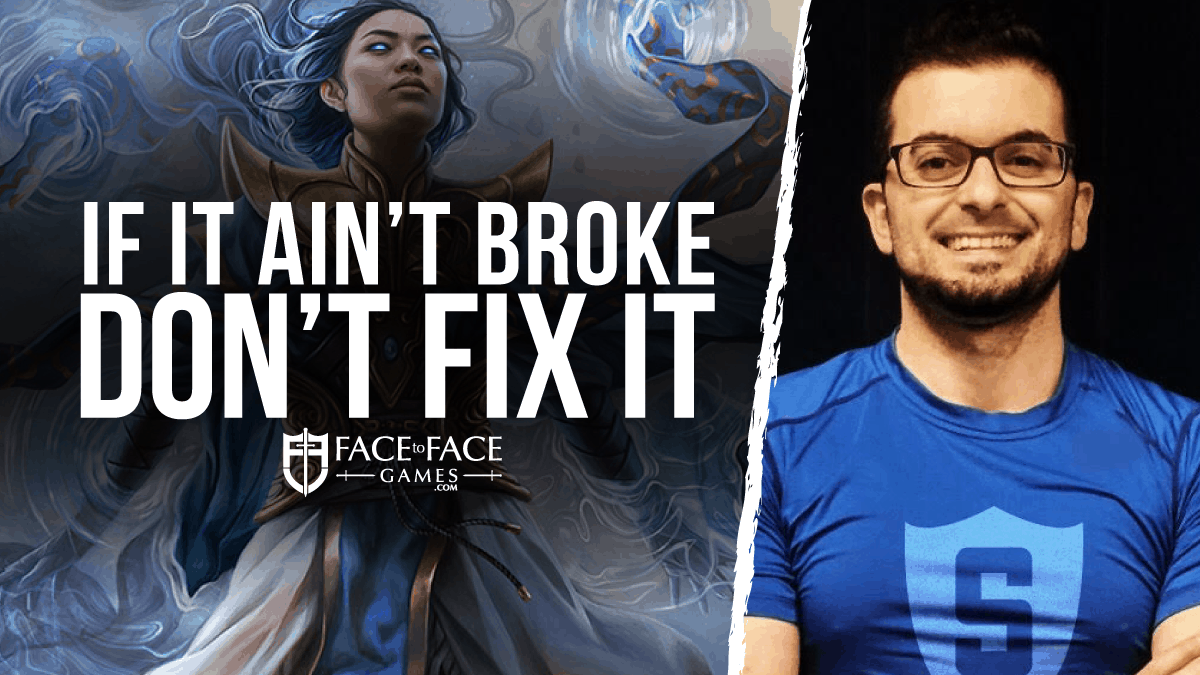 While Bant Control has been on the rise, Azorius Control has been downtrending since Urza and Oko’s Elk show stole the spotlight. It went from being one of Modern’s most prominent competitive decks to struggling to remain relevant. What happened or changed after its GP Dallas win in June that caused it to slump? It’s time to refocus and return Azorius Control to form.

Azorius aficionados like MTGO star Do0mswitch and I believe that a key element to this archetype’s continued success in Modern is to refine and evolve a foundation that’s proven to work. There’s no need to fix what isn’t broken. We’ve made incremental revisions in the maindeck and sideboard to adapt to the post-Eldraine meta.

He recently placed 6th with his current list in the MTGO Modern PTQ and it was the only Azorius Control deck in Top 32:

For reference, he beat:

We’re playing the same version, but I’ve tweaked a few spots in my list. I’m playing one [Card]Vendilion Clique[/Card] over one [Card]Snapcaster Mage[/Card] for more disruption and pressure against Shadow, Infect, Tron, E Tron, Amulet and Urza. It’s well-positioned, baits and forces action, and allows me to set up my plays by informing my decisions and sequencing. It even has some nice added synergy with Narset.

The other change I made in the main was replacing [Card]Timely Reinforcements[/Card] with [Card]Gideon of the Trials[/Card] because of his effectiveness against Grixis [Card]Death’s Shadow[/Card], Burn (Emblem), Jund, Infect, CrabVine (Emblem), and E Tron — all decks that are relatively popular. I also like that Gideon can attack walkers (and Oko can’t turn him into an Elk!), which works well with our sweepers and helps us turn the corner.

I also shaved one [Card]Opt[/Card] (three is fine with 25 lands and three Jace) to play [Card]Winds of Abandon[/Card] for more interaction. While less efficient than [Card]Oust[/Card], it’s a clutch alternative removal against E Tron if Chalice shuts down [Card]Path to Exile[/Card], it can permanently deal with disruptive creatures like [Card]Meddling Mage[/Card], it has the flexibility of being a sweeper that gets around [Card]Gaddock Teeg[/Card] and can be a blowout against Dredge and CrabVine, especially alongside your own creatures. If need be, it can even be reused as a board wipe with [Card]Mystic Sanctuary[/Card] later in the game.

I think one of Azorius’ most glaring issues has always been it being too dependent on [Card]Path to Exile[/Card] and [Card]Supreme Verdict[/Card], then struggling to deal with small, disruptive creatures and mana dorks in the early game. Obviously Path is great, but unlike all the midrange decks you don’t have a powerful secondary option like [Card]Fatal Push[/Card] or [Card]Lightning Bolt[/Card]. The other common problem is applying pressure and finding ways to close the game. I think the changes I made have helped address these concerns.

One of the deck’s most prominent strengths is its versatility and ability to adapt thanks to a variety of tools at its disposal. For instance, if you want another sweeper, I’d play [Card]Engineered Explosives[/Card] for its versatility, [Card]Cataclysmic Gearhulk[/Card] to hedge against Humans or [Card]Settle the Wreckage[/Card] to respect Dredge.

I’m currently satisfied with [Card]Oust[/Card] and [Card]Winds of Abandon[/Card] as additional spot removal, but I think [Card]Condemn[/Card] is a fine choice for different reasons, such as being better against Shadow and Dredge. [Card]Cast Out[/Card] is another one seeing some play because it unaffected by [Card]Veil of Summer[/Card] (making it more effective against Oko than [Card]Detention Sphere[/Card]), it can be played as an instant, it dodges [Card]Abrupt Decay[/Card] and [Card]Engineered Explosives[/Card] (most of the time) and has the flexibility of providing cantrip.

I like [Card]Pithing Needle[/Card] specifically for some of the toughest walkers to handle, like Oko and Karn, but it can even shut down numerous troublesome creatures, artifacts and lands, such as [Card]Inkmoth Nexus[/Card].

For more disruption, [Card]Surgical Extraction[/Card], [Card]Damping Sphere[/Card] and [Card]Ashiok, Dream Render[/Card] are my top options. They shine against Amulet, TitanShift and Storm. That said, Extraction has been a bit underwhelming in the current meta with only Tron, TitanShift, and CrabVine being its best matchups. It’s just a bit too narrow against other top decks that are attacking from multiple angles.

I’ve always been an advocate for [Card]Runed Halo[/Card] to shut down threats and combos that are difficult to keep in check, most notably against Izzet Phoenix when [Card]Faithless Looting[/Card] was still legal. While I don’t recommend it right now with Urza and Oko dominating, I’d keep it on your radar for Infect, Bogles, Storm, TitanShift, Dredge, CrabVine and if Grixis Death’s Shadow becomes the premier Shadow deck. Keep in mind that it doesn’t protect your walkers. It’s generally more effective alongside a creature plan.

As far as our counter-suite goes the only others I’d play are [Card]Ceremonious Rejection[/Card] and [Card]Spell Pierce[/Card] because they’re effective where you need efficient interaction, such as Tron, E Tron and Urza.

[Card]Gideon, Ally of Zendikar[/Card] and [Card]Elspeth, Sun’s Champion[/Card] are my walkers of choice if I want a haymaker against Jund, E Tron or other grindy matchups. In the same vein, I think [Card]Gideon Jura[/Card] is worth considering again because of his impact vs similar matchups as [Card]Gideon of the Trials[/Card], but Jura is also solid against Humans. If there was ever a metagame best suited for the Gideon package, it’s this one.

Brazen Borrower deserves a nod for its versatility and ability to efficiently interact with walkers, which is especially important against Oko and Karn, and other problematic cards at instant speed. In fact, Joseph Bernal played four copies in his 20th place Azorius Tempo/Control list at GP Columbus. It’s the real deal. I can see playing one to two copies in Do0mSwitch’s version.

Lastly, I sometimes incorporate a transformative value-based midrange plan by playing Wall of Omens in the main and Restoration Angel in the sideboard. Restoration Angel can generate more value from Wall of Omens, Snapcaster Mage, Vendilion Clique, Cataclysmic Gearhulk and Lyra Dawnbringer. This approach is notably good vs Humans, Dredge, E Tron, Burn, Infect, Grixis Death’s Shadow and Jund. Having the ability to be more proactive post-board is something I like a lot.

We’re going to continue seeing a lot of E Tron, especially since it has a generally pretty good against the boogeyman in Urza. Thankfully, E Tron is a solid matchup for Azorius Control. In terms of threat assessment, [Card]Karn, the Great Creator[/Card] is our number one priority, so counters like [Card]Force of Negation[/Card], [Card]Dovin’s Veto[/Card] and [Card]Disdainful Stroke[/Card] are important, including the timing and way you utilize [Card]Cryptic Command[/Card].

Keeping them off Tron is part of the plan, which should be prioritized over [Card]Eldrazi Temple[/Card], unless there’s no Tron lands in play. Use this advice to inform your [Card]Field of Ruin[/Card]s.

Humans is one of the tougher matchups in Modern for Azorius Control. If it continues to trend upward, play one or two copies of [Card]Oust[/Card], consider another wrath-effect in addition to [Card]Supreme Verdict[/Card], such as [Card]Wrath of God[/Card] and/or [Card]Cataclysmic Gearhulk[/Card] (historically the best vs them).

Walkers are generally underwhelming against Humans, but [Card]Jace, the Mind Sculptor[/Card] and [Card]Teferi, Time Raveler[/Card] are reasonable because they have the ability to [Card]unsummon[/Card] their disruptive creatures like [Card]Meddling Mage[/Card] and [Card]Kitesail Freebooter[/Card]. Teferi can also bounce [Card]Aether Vial[/Card], and they can help you draw answers. [Card]Gideon Jura[/Card] is another exception because he can help you stabilize and take down disruptive creatures like [Card]Meddling Mage[/Card]. That said, I think a creature-oriented plan is better against Humans. If it gets more popular, it’s time to turn to the angel plan.

This is the top deck in Modern right now, and can be tricky if you don’t keep Emry, Urza and Oko off the field in the first few turns. Recent lists have also included [Card]Karn, the Great Creator[/Card] and [Card]Teferi, Time Raveler[/Card], which are other high priority threats to keep in check.

Maintain a high level of interaction, especially early, and try to turn the corner as soon as the opportunity presents itself. It’s like playing a more complex mirror match. As Do0mSwitch has said and shown, Urza can be fine for us if we know what we’re doing and understand the dynamics of the matchup.

It’s a delicate matchup, because if just one threat lives early you can get snowballed. But if you can lineup your answers well, it’s manageable.

[Card]Runed Halo[/Card] (naming [Card]Death’s Shadow[/Card]) has historically been one of the best cards against them, but it’s not as good against other variants (Jund, Sultai) because they play more threats and have multiple angles of attack.

The only other card with a proven track record in the maindeck against Burn is [Card]Wall of Omens[/Card] as it helps to stem the bleeding against their early creatures, which makes it a reasonable option when Burn is one of the top decks.

This is one of those matchups where you don’t want to go long. The faster you can stabilize and turn the corner, the better. [Card]Jace, the Mind Sculptor[/Card] is arguably the best way to close.

That being said, Burn actually has trouble against big bodies and threats they can’t efficiently interact with, such as [Card]Wall of Omens[/Card], [Card]Kor Firewalker[/Card], [Card]Geist of Saint Traft[/Card] and [Card]Kitchen Finks[/Card]. This approach puts them in a position where they can’t effectively leverage their creatures or burn spells. I recommend this midrange strategy if you continue to have trouble, but only if Burn makes up a significant percentage of the meta.

Out: 1 Narset, Parter of Veils, 1 Teferi, Hero of Dominaria

Adapting to the Metagame

If you’re a seasoned Modern player, you’ve likely noticed the way metagames cycle through competitive decks, which are often pillars of the format. You can’t count out well-designed, inherently good decks for too long. For instance, Do0mSwitch’s sideboard philosophy is to start with three [Card]Rest in Peace[/Card], then he picks 12 other cards. That’s not to say it’s wrong to play less, but this is part of the deckbuilding groundwork he’s built for himself. Shortcuts like this are key to winning in Modern.

By acknowledging this principle, focus on establishing a consistent formula and core, then tweak your flex spots to adapt to meta trends or hedge against weaker matchups. Design your sideboard to cohesively complement the maindeck, but choose cards that cross-perform against common archetypes/gameplans instead of targeting specific cards/matchups, such as:

Despite a lack of representation, I believe Azorius Control is well-positioned in this metagame and it’s only a matter of time before it’s ready for a competitive comeback.