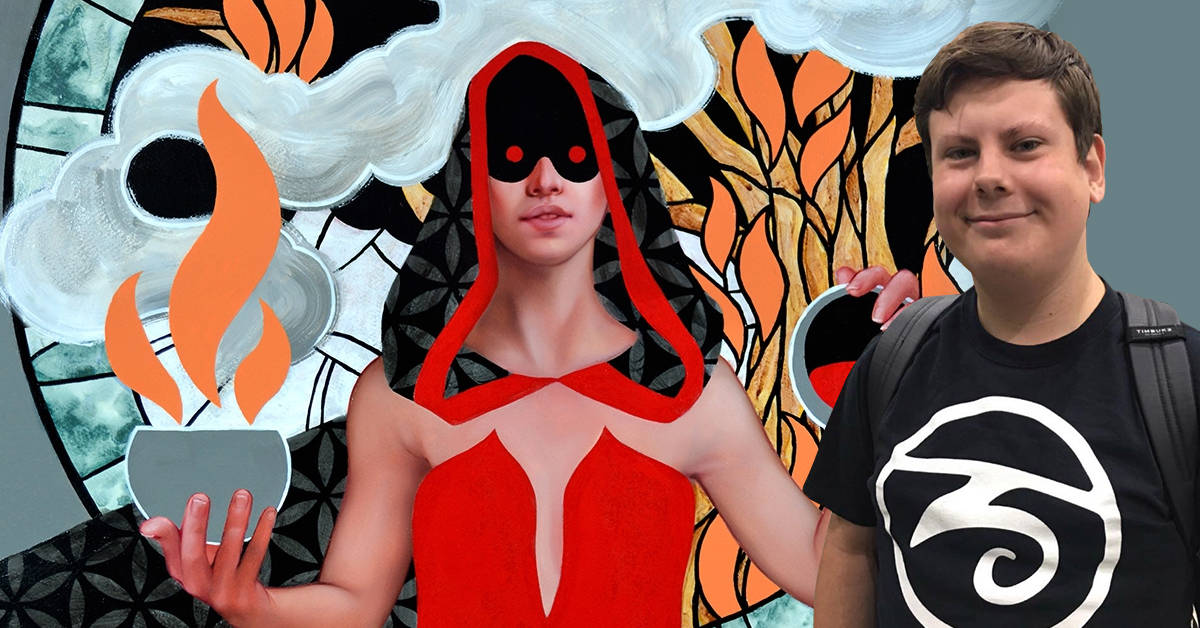 After my success in the Arena Open I was absolutely mesmerized with the newest Strixhaven spoilers. For those of you who don’t know, Strixhaven, Magic’s next set and twist on the “magic school” genre, will incorporate 63 instant and sorcery cards handpicked from Magic’s history as cards you can open in each booster. These “archive” cards will appear once per pack, making for a unique drafting experience. You could open Crux of Fate in your sealed pool! Or maybe get hosed by an Urza’s Rage. While I’m no stranger to playing in formats with special cards (expeditions, masterpieces) I was excited to be able to play a standard limited format with a variety of cards I was already familiar with.

As I scrolled through Twitter on Friday I took note of the newest spoilers content creators were posting. I glanced over the art for a surprising reprint that was poised to take Historic by storm: Faithless Looting. Glancing over the art of a hooded person with glowing red eyes, I couldn’t help but notice some of the comments: “Is this real?” “Why does this feel like a joke?” “???????”

I figured people were reacting to WotC’s decision to print such a powerful card into Historic, as Looting was currently banned in Modern. However, after scrolling a bit further and seeing the art reposted to multiple websites, I started to realize people were referring to…the art.

The art in question:

On my first glance I didn’t pay attention to that many aspects about the art itself. The glowing red eyes beneath the hood as well as the jar of blood emptying were the most striking parts of the image, but I gave it little thought. Before I knew it, however, people started giving their own takes on the matter. This is just a handful of the comments that I saw on multiple social media outlets. A handful.

Feel free to take a look at the original tweet:

After reading so many hateful and vile comments as well as an article(!) about the whole debacle, I began to ask myself a few questions about this whole situation. Why did people hate this art so bad?

Reason #1: The Art Wasn’t What People Were Expecting – In at least the last 10 years, Wizards of the Coast has made Magic’s art style very clear. Magic carries a tone of fantasy and realism, depicting characters and creatures in an art style similar to the covers of fantasy novels. The art carries a tone of seriousness, yet at times it can be comedic. One of the most important pieces of Magic art in recent years was the cinematic trailer for War of the Spark Magic had never been represented in such a way before.

The dazzling cinematics, the striking sound effects combined with the epic version of Linkin Park’s “In the End” made for an unforgettable trailer, and it’s no surprise that the video to this day has over 13 million views.

These arts definitely have a more abstract and collage feel to them as opposed to traditional Magic art.

Knowing all of this now, the art of Faithless Looting deters from the norm of what the public expects in a modern Magic: The Gathering card art. This may have taken people off guard with its stylistic choices, but even after looking at the art I was still perplexed while people were so hateful. Then it hit me.

Reason #2 – People Have an Emotional Connection to the Magic Card Faithless Looting – If this art had been printed on a random card like Blazing Volley or Sure Strike, would people be in such an uproar? The answer – probably not. Which means that there is more than just general disdain for the art going on here. Faithless Looting is an iconic Magic card. First introduced in Dark Ascension in 2011, Faithless Looting has seen play in numerous top modern graveyard-themed decks, from 2018-2019, most notably, Izzet Arclight Phoenix.

However, on August 26 of 2019, Faithless Looting was banned from Modern because “…over the past year the winningest Modern deck at any given point in time has usually been a Faithless Looting deck. Examples include Hollow One, Izzet Phoenix, and Dredge and Bridgevine variants.”

This ban probably left many people angry at WotC for banning a deck they had invested both time and money into, and I believe this is one of the reasons that fuels the hate towards this art. With its introduction to Historic, players were excited to be able to play Arclight Phoenix alongside Faithless Looting again. However, they were less enthusiastic about being forced to play with art they didn’t associate with the original art. With so many people who have both emotional and financial connections to Faithless Looting’s banning, it’s not a surprise that that energy and emotion was fueled into the vitriol and hate for this art.

Now you might be asking something along the lines of, “Roman, why do you care?” For those of you who don’t know, I have a background in film sound design. I’ve always been interested in making movies and was fortunate enough to go to NYU and move to LA in 2018 to follow my passions. Art has always been an important part of my life. I love listening to music, going to museums, playing video games, and just immersing myself in my next big artistic interest. Art helps bridge the gap between cultures and helps us better understand the crazy world we live in. Discussing art and its value goes hand in hand with viewership, and to better understand and educate myself I’ve always found it important to talk about why or why not a piece of art is “good” or “bad.” It’s difficult to dismiss something without giving it the benefit of the doubt.

In preparation for this article I reached out to one of my good NYC friends, triple Grand Prix Top-8 competitor, but more importantly, founder and director of Movie Klub NY, Lan D. Ho. I met Lan in my senior year at NYU, and after an introduction from Mike Flores (and beating him at FNM) we quickly became friends. We bonded primarily over our shared love of movies and to this day I’m grateful that Lan has introduced me to some of my favorite titles, such as “Being John Malkovich” and “Columbus.”

After discussing the art in question Lan made an interesting point: “The art is polarizing, but the people who like it will appreciate it a lot more. I like art that is more abstract, more broadly iconic…safe generic fantasy cover art isn’t interesting to me.”

Going off my point from earlier, Lan identifies here that this Faithless Looting art isn’t for everyone. It’s jarring, and while the art isn’t perfect, it will still appeal to those who are fans of abstract and experimental art, which is in line with the art Carly Mazur creates. Am I saying you have to have some high exquisite unorthodox taste to like this art? No! However, this art deviates from the norm in Magic: The Gathering, and on that principle a lot of people will have disdain for it and others might find a secret appreciation for it.

To quote art critic Clement Greenberg, famous for dissecting the work of artists such as Andy Warhol and Jackson Pollock: “Art is a matter strictly of experience, not of principles and what counts first and last in art is quality, all other things are secondary.”

I love the glowing red eyes beneath the mage’s hood. After a second look at this art I was immediately reminded of the Nazgul from the animated 1979 version of “The Lord of the Rings,” this frame in particular:

There’s something sinister, and classically fantasy about the image of glowing red malicious eyes beneath a hood. It might be a trope I’ve seen before, but it’s a detail that stands out to me in this art.

Is it my favorite Magic art ever? Nope. There are things I dislike about the art from my objective point of view. What’s more important is how this art deviates from the preconceived notions that people have of what Magic: The Gathering card art is or should be. It’s a style we’re not used to as players, and while this art isn’t my favorite Carly Mazur art, I’m excited by what future cards she’ll be working on.

I also took it upon myself to do a bit of research on Carly Mazur’s other art. Upon a quick Google search and trip to her website, I was met by multiple stunning pieces:

These pieces are gorgeous and I kind of wish they also ended up on other cards. There’s something eye-catching about the acute attention to detail in the bodies of Carly Mazur’s paintings that meshes so well with some of the stark backgrounds. I absolutely love this kind of collage art that combines hyper-detailed paintings with these abstract backgrounds. Fingers crossed Carly’s work appears on lots of future cards.

We’re better than this as a community and should strive to call out hate when we see it. While some people might dislike this art and others may love it, hey that’s entirely their opinion. Am I saying you shouldn’t dislike this art? Hell no! I honestly love that people have an opinion about a piece of art and are willing to discuss it in a public forum. However, I draw the line at vitriol, transphobia, and slander against an artist that is undeniably incredibly talented. And look, I’m not expecting for people to change overnight either.

We owe it to ourselves as Magic players, members of such a vibrant and diverse gaming community, full of amazing, kind, and talented people, to consider that our words and actions have consequences. While I was bothered by how this backlash might affect the artist, I was happy to see this on my timeline:

Let’s be better everyone. Thanks for reading!