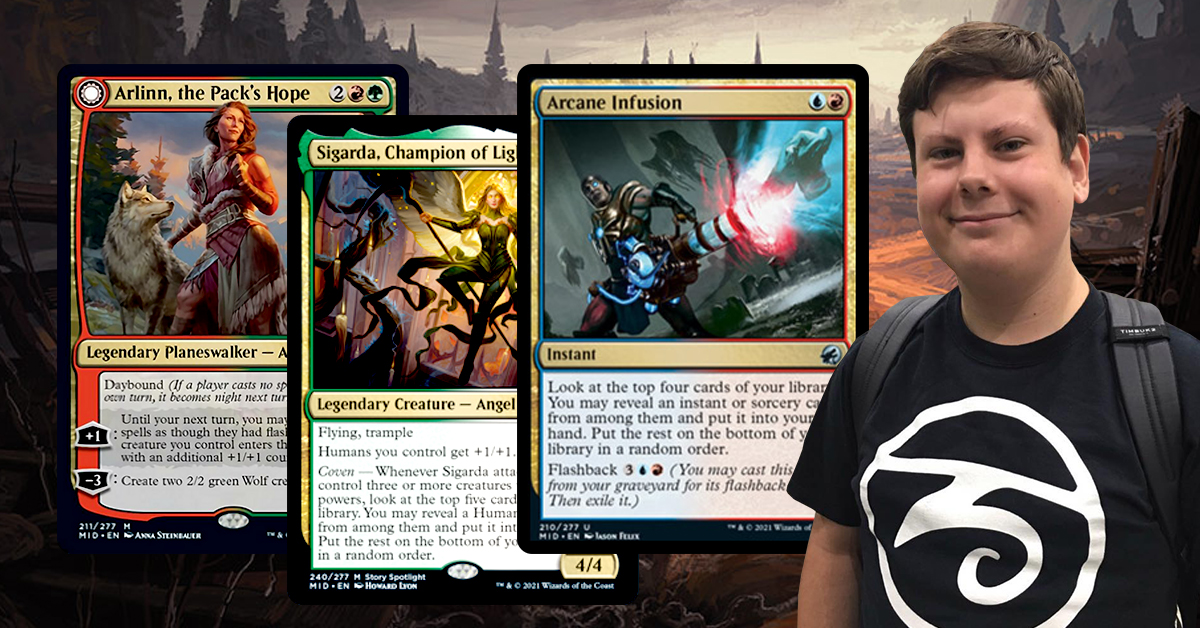 Come one, come all to the Harvesttide Festival! A safe haven, free from the terrors of Innistrad. The Midnight Hunt is upon us, and you know what that means…spoiler season! Innistrad: Midnight Hunt spoiler season is officially in full swing and with that, it’s time to start analyzing the impact the set will have on Standard. While I’ve taken a break from Standard, with a small exception for Standard 2022 on Arena, and have been focusing primarily on Limited, I’m ready to venture back into the dark of the night to find what lurks in the shadows…

Standard finds itself in quite an interesting spot with the release of Midnight Hunt. With the rotation of some of the more powerful sets we’ve seen in recent years, the format has becomes more powered-down. Standard 2022, while an incomplete, best of one format, still showed us what cards and potential archetypes may survive with the addition of Midnight Hunt. In my last article on the format I discussed what clusters of cards I thought were the most likely to see play in the new format. Keeping those in mind, let’s take a look at some of the spoilers from Midnight Hunt.

Midnight Hunt brings us a brand new cycle of allied lands, nicknamed the “slow lands.” These lands come into play tapped unless you control two or more lands. Right off the bat one aspect I like about this land cycle is that they benefit slower decks more than creature decks. Usually control decks don’t care about putting the first land or so into play tapped, so it’s more valuable for a control deck to draw this card later in the game.

Decks with Expressive Iteration also get to play this land untapped off the exile clause. This land coming to play tapped during turns one and two makes them a little weaker in low to the ground aggressive strategies This makes me hopeful that traditional midrange and control decks will return to Standard.

Arlinn is an exceptionally powerful four drop that could see play in a variety of decks. Arlinn’s first +1 ability can be useful in a number of situations. It allows you to play around wraths and sorcery-speed removal, putting pressure on your opponent’s planeswalkers. In creature mirrors it puts pressure on your opponent to decide how they want to navigate through combat, forcing them to play around any number of creatures you might have at the ready. An Arlinn +1 could mean your instant-speed Goldspan Dragon can eat your opponent’s Goldspan!

…and that’s just one of Arlinn’s four abilities. On the front side you also get to put four power into play for four mana right off the bat, while at the same time pressuring your opponent with a planeswalker that can accrue value – a similar effect to the already popular Esika’s Chariot.

On the back half of Arlinn we get an ability to add two mana, which can fuel pumping out creatures or activating abilities. We also get a Gideon Jura-esque effect, allowing Arlinn to act as an indestructible, trampling attacker.

Overall, I love this card and am curious exactly where it will see play in Standard. One on hand it can see play in Gruul Magda style decks, even though it conflicts a bit with Esika’s Chariot at the four drop slot (although maybe it’s good to play a split since both cards are legendary). Arlinn could also see play in a werewolf aggro style deck as well, especially with wolf lords. I could potentially see Arlinn in a sort of midrange Temur flash shell as well, but for the most part Arlinn seems like the perfect aggro deck planeswalker.

Speaking of werewolves, let’s talk about these two cards with Standard potential. First up we have Tovolar, a transforming werewolf that on both sides has a card draw ability whenever an individual wolf or werewolf creature does combat damage to a player. On the backside we get a Kessig Wolf Run activated ability that applies only to wolves and werewolves.

Tovolar’s relevance in Standard will depend on some of the other werewolf and wolf synergies. Werewolf Pack Leader is an auto-include in the deck, but Tovolar will benefit from cards that make wolf tokens especially. Ranger Class has proven to be a powerhouse in AFR Limited, and will prove to be a vital part of any Tovolar deck. Turn 2 Class into Tovolar netting you a card is a perfect way to put your opponent on the backfoot.

As a control mage I’m in love with Arcane Infusion. While Expressive Iteration is still a powerful card that has seen play across a multitude of formats already, my one issue with it in Standard is that it was more of a creature-midrange deck card as opposed to a control card. Iteration felt clunky at times with the Foretell cards. Infusion fits way better into control and other spell-based decks. It’s an Impulse that can find card draw spells such as Behold the Multiverse or it can find ways to catch up against creature decks such as Doomskar, Shadows’ Verdict, and Blood on the Snow.

On top of all of that it has Flashback! While five mana is an expensive price to pay, being able to search for an exact answer or way to pull ahead can be vital in certain situations. I think Arcane Infusion will work best with wraths and card draw spells such as Sea Gate Restoration in control strategies.

Arcane Infusion can also fuel triggers in Izzet spell-based burn decks with cards such as the newly reprinted Thermo Alchemist. Thermo Alchemist and cards like it have seen play in various Red decks over Standard’s history. One deck in particular I want to bring up is my good friend Miles Rodriguez’s SCG Invitational Top 8 deck during the Eldritch Moon Standard Era:

I’m curious if a similar deck could be viable in Standard, but we may need to wait until Crimson Vow for more cards in the pool. However, we already have a variety of Izzet spells to choose from. Frost Bite is our Fiery Impulse, Roil Eruption is our Incendiary Flow, and Tormenting Voice is legal. While we don’t have access to Bedlam Reveler we still have powerful Izzet top end cards such as Magma Opus. When it comes to a format with such a long history such as Standard, it’s important to take note of when cards get reprinted, especially if they were competitively viable in the format. Thermo Alchemist saw success in its days during Shadows block, and it’s definitely worth exploring in Midnight Hunt Standard.

Sigarda is a clear aggro card that would act as the top end threat in a Selesnya humans deck. There are a couple of powerful humans in Standard already, such as Luminarch Aspirant and Elite Spellbinder. One useful aspect of Luminarch Aspirant is that you can control its trigger to allow you to have at least three creatures with different powers for Sigarda’s attack trigger. I’ll be on the lookout for more powerful human creatures to find off of Sigarda.

I wanted to briefly touch on Graveyard Trespasser. Trespasser reminds me of a more beefed up Deathgorge Scavenger, and will be useful against decks with various flashback or other graveyard-based synergies. While Graveyard Trespasser is a werewolf, it’s not in Gruul colors, making me doubtful it will see play in a traditional werewolf-style Gruul aggro deck. I could see Trespasser as a sideboard card, similar to Deathgorge Scavenger, or an important piece of a Mono Black aggro deck. I could see a deck with Skyclave Shade and Eradicator Valkyrie, but I’m unsure if there are enough cards to make a deck like this competitively viable as of now.

I also wanted to quickly talk about Dissipate. Dissipate was a staple in control decks during its last printing in original Innistrad. Dissipate does conflict with Saw it Coming. I like the ability to Foretell Saw it Coming, especially against decks with discard. Saw it Coming is also better Foretold with cards like Goldspan Dragon, allowing you to cast it immediately off a Treasure. Dissipate’s value in Standard will depend on how many decks utilize the graveyard. My bet is on Saw it Coming being the premier counterspell in Standard for the time being.

Standard is looking very interesting with this first batch of spoilers from Innistrad: Midnight Hunt. While there are certainly very powerful individual cards in the format, such as Goldspan Dragon, it will be interesting to see what deck diversity is like with Midnight Hunt’s release. One thing that stands out to me about the design of the cards spoiled so far is that they all seem very reasonable. Sigarda, unlike Winota, has a conditional draw card trigger on attack – it doesn’t even put creatures into play! Compare that to Winota, another four mana 4/4 that let you basically win the game on certain attacks. It also looks like there’s support for tribal decks, especially werewolves (I’m sure we’ll see a variety of vampires come Crimson Vow).

On top of that we have a couple interesting removal spells, instants, and planeswalkers. My only worry about Standard is that in recent times the threats have outclassed the answers, so I’m hoping the answers from this set and next can combat some of the more powerful creatures and planeswalkers. This set definitely feels at a lower power level (so far) than some of the more recent Standard sets, but I ultimately think that’s a good thing. I’m looking forward to brewing a ton of decks!

Keep a look out for the second part in this series analyzing Innistrad: Midnight Hunt spoilers!