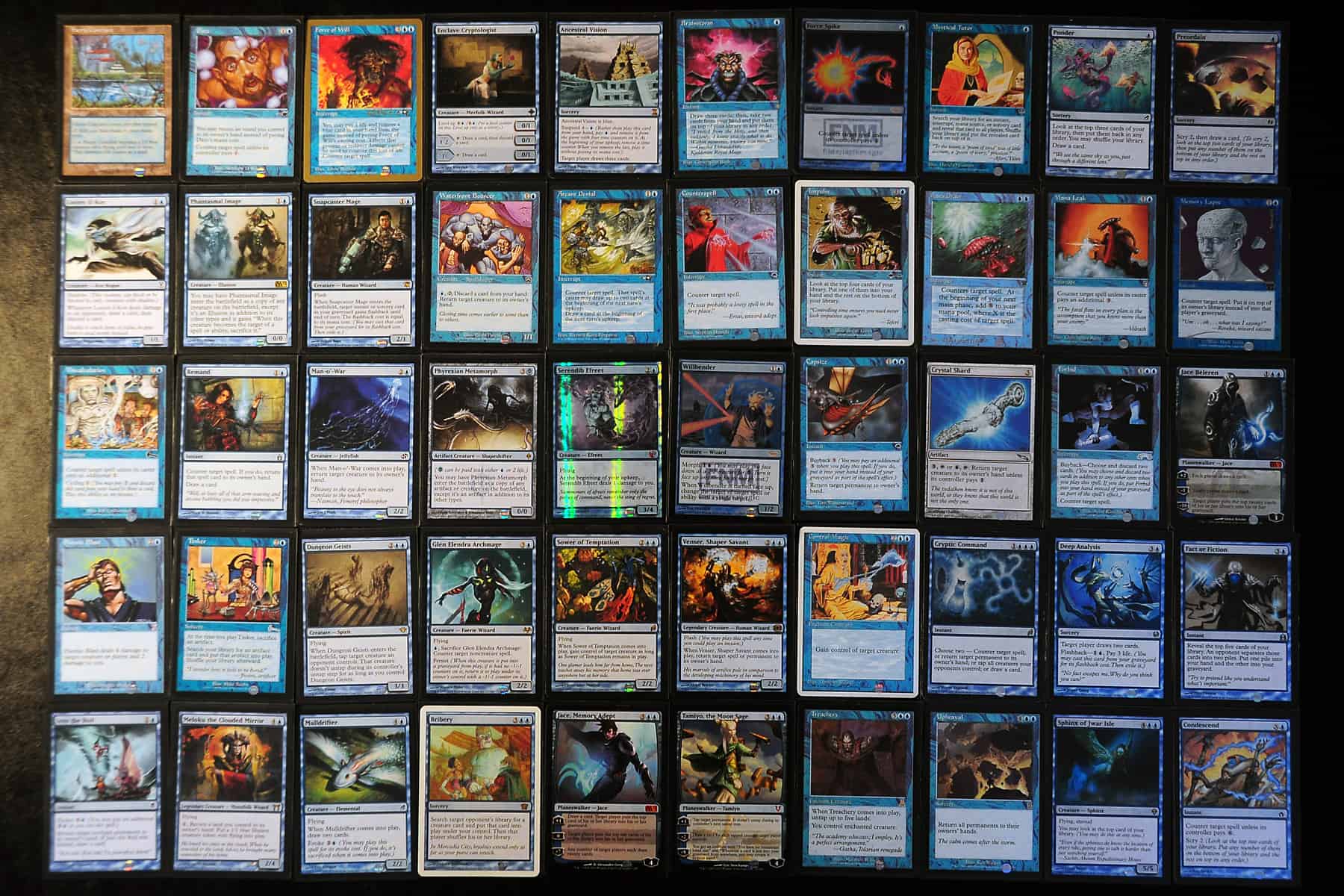 A few weeks ago, my good friend Mike Lucas came to me with an idea and list for a new type of cube. His idea was simple at its core, but brilliant: What if we wanted to combine two of our favorite things – drafting and playing Vintage?

So, how does it work?

I’m glad you asked, dear reader! Drafting the Vintage Cube is like drafting any other cube. Gather your friends, make 3 packs of 15 cards apiece, open and pass to your left. However, here’s where the twist comes in. Whenever you take a card, you get up to four copies of that card to build with when it comes time to construct your deck. The exception is if the card you’ve taken is Restricted in Vintage. If that’s the case, it’s Restricted here, too – sorry, you don’t get four [card]Ancestral Recall[/card]s.

The Vintage Cube differs from other cubes in a variety of other ways as well. Because the goal is to play something akin to Constructed Vintage, the list itself is not color balanced or balanced between creatures and non creatures. Mike and I have both worked tirelessly to create what we believe to be the best drafting experience out there, and I am privileged to be sharing our work with you. We have experimented with drafting Restricted cards separately, lands separately, versions of the cube where everyone gets a copy of Power, and everything in between. Without further ado, I present to you the Vintage Constructed Cube:

For a step-by-step look at how the cube came to be, as well as revisions and sample decks, please visit Mike’s blog at www.yawgmothswin.tumblr.com.

As you can see, not all of the cards are something that is necessarily played in Vintage due to space or wanting to support different archetypes. We have also chosen to omit some cards based on wanting to make drafting decisions interesting. For example, we’ve chosen not to give Dredge access to [card]Flame-Kin Zealot[/card] or Elves access to its primary finisher in Legacy, [card]Craterhoof Behemoth[/card]. Cards like those, ones that make the draft linear or only serve to speed up the actual gameplay, are ones that we have tried to minimize as much as possible while still supporting as many diverse archetypes as we can.

Wow! This pack has some serious options. Do you take the powerful Restricted cards like Ancestral Recall or Demonic Tutor? Or would you rather have four Mishra’s Workshops and hope to pick up the extremely potent Shops deck with Sphere of Resistance and Lodestone Golem? What will the next person decide to take? Is True-Name Nemesis a reasonable card to send to someone fourth or fifth? How many decks is Mental Misstep going to be good against at the table? Is it a better pickup than Nihil Spellbomb?

One important card to highlight in this pack (and in the cube in general) is Preordain. This incredibly potent one-mana selection spell is powerful enough to be banned in Modern, but unlike its friends Brainstorm and Ponder, is not Restricted in Vintage. There have been very serious arguments about whether or not picking 4 Preordains is a better pick than Ancestral Recall! In just about every other format, that’s not even a consideration. Here, that’s a topic where both sides are defensible!

Shoring up your deck’s weak matchups is also incredibly important. Because your sideboard is quite expansive, due to the fact that you can build a 60 card deck with a fraction of the cards that you select, picking up powerful answers to your opponent’s strategies is essential. Our testing has shown that, for example, the Dredge deck really is public enemy number one. That’s no real surprise – [card]Bazaar of Baghdad[/card] is one of the most powerful Magic cards ever printed, and it makes the deck incredibly fast and consistent. As a result, you need to have some graveyard hate like [card]Nihil Spellbomb[/card] or [card]Relic of Progenitus[/card], not only for Dredge but for Reanimator, Auriok Salvagers, and even Tarmogoyf control decks! The same goes for cards like Nature’s Claim or Ancient Grudge.

If you look at the cube, you’ll notice that it is a scant 305 cards, far shy of the *normal* 360 that is common in an 8-person draft. First, we wanted to maintain decks that will commonly come together despite the fact that you might not always get every piece to it. This cube is designed for 6-person drafting; however, if you wish to draft with up to eight people, I recommend that 3 packs of 12 cards apiece be drafted. That is 288 total cards for those of you keeping track at home, which is up from the 270 that are seen in a 6-person draft with 3 packs of 15. Yes, this means that each person is overall seeing less cards; however, it makes each decision that much more important. If you want to expand the cube slightly, 3 packs of 13 cards for 8 people would be 312 cards; visit Mike’s blog to get some ideas for additions!

One hallmark of the Eternal formats is the need for “fair” decks as opposed to those trying to cast Tinker or a lethal Tendrils as soon as possible. This is an area that we have tried to support more than others; it’s relatively easy to identify the “broken” strategies, but making sure the less inherently powerful options are still supported and have the tools to thrive is something that’s essential not only the Vintage environment, but that of any cube no matter what the power level is. I’m looking at you, MTGO Holiday Cube featuring Time Vault!

To that end, here is a sample BUG Delver list:

Mike has a detailed post about this deck which you can read here.
One problem that Mike and I have encountered as we have developed this cube is the issue that hate was too powerful. Our early draft of the cube included the marquee hate cards [card]Rest in Peace[/card] and [card]Iona, Shield of Emeria[/card], both of which proved to be simply too oppressive. There’s not enough answers to hate cards to go around, which is why we chose to remove the best of the best, like RIP, while leaving some strong answers in (as well as answers to those answers!). If you choose to test out this cube, however, we are not saying that the list we’ve provided is the perfect one – feel free to tweak it to your heart’s delight.

But, Wait, Elliot… Isn’t This a Hassle to Obtain and Maintain?

I’m not going to sugar-coat this one. I have chosen to create a personal version of this cube, which was a painstaking effort to transfer into the excellent program Magic Set Editor, complete with Oracle-accurate proxies and a Restricted reminder on the applicable cards for those who might not know the list offhand. We had a few feel-bads early on when a diehard Legacy player asked me where the other three [card]Lion’s Eye Diamond[/card]s were… not something we care to repeat! While the draft set itself is only 305 cards, remember that there are an additional three copies of each card… that’s over 1,200 physical cards! Because of legal reasons, at this time I am not releasing the PDF of this cube (despite putting a disclaimer on every single card). I’m going to consult with some people who are more knowledgeable on the subject than I am.

If you do choose to make your own copy of this cube, I recommend sorting it by color only – anything further is a waste of time. Remember to keep the copies of three together; it is actually way easier than it sounds for everyone to find all the cards they need. Just remember to take all three extra copies, not just the number you think you’re going to end up playing. It will make things way easier at the end of the draft.

Clearly, there are significant issues with making this cube insofar as that acquiring the cards is a bit of a hassle. I will tell you, however, that I would not be writing this article if I didn’t think that this process is worth it. This experience is unlike anything else that I have ever done, and it is among the most fun I have ever had drafting and playing this great game.

I hope that you try out this for yourself (do a sample draft on CubeTutor!), and, as always, I am always willing to battle with you if we find ourselves at the same event. I hope you have as much fun exploring this cube and trying as many exciting, new things as I have. More than anything, I have found this cube to be a breath of fresh air into what we can accomplish with Magic.