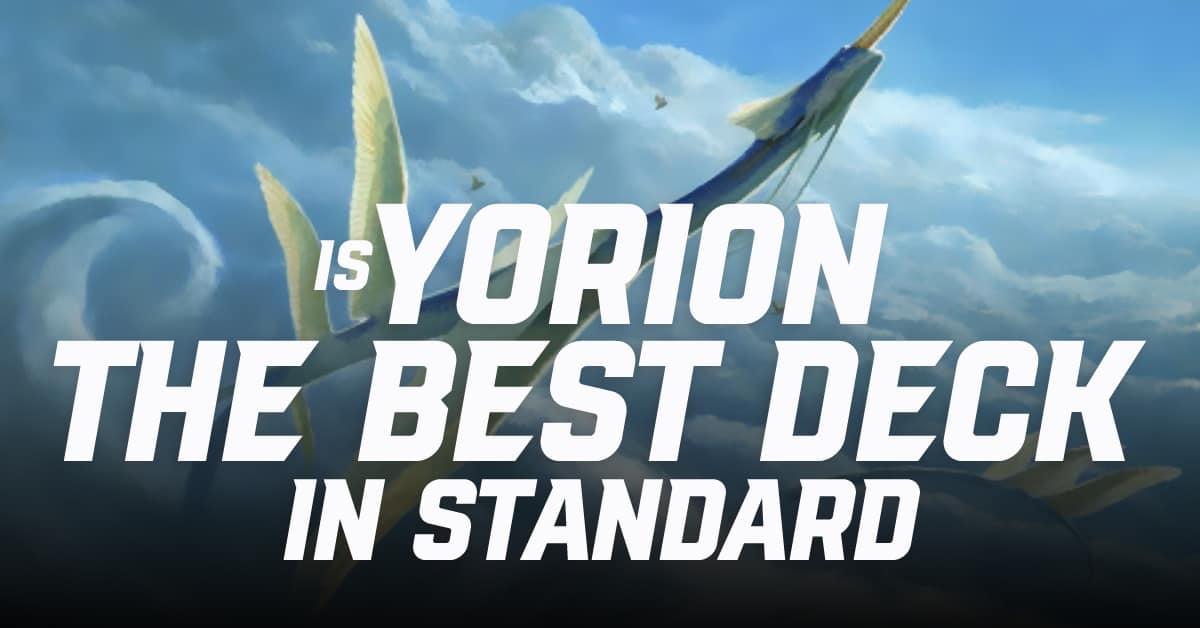 I can now say with a straight face that Standard is fun again! While all of the relentless bannings have definitely made an impact, and the format isn’t perfect, the most recent data clearly shows that Standard is in a balanced and in a healthy spot. This past week I’ve gotten to play a ton of different decks while watching coverage of some small events here and there. Today I’m going to be talking about what decks stick out as this week’s best strategies and what cards are going up in value overall since Omnath and Lucky Clover’s departure from the format.

Perhaps one of the strongest control and midrange build-around cards is Yorion, Sky Nomad. With the companion rule change a couple of months back, Yorion remains the ‘best’ companion to partner with, with Lurrus trailing swiftly behind, since the deck constriction clause of playing twenty extra cards isn’t a huge deal (and is in some case a bonus, I’m looking at you Teferi’s Tutelage) but the payoff being you have a three mana ‘clue’ that draws you a Yorion. What’s even more powerful about playing Yorion is that you can completely construct your deck around Yorion. Yorion synergizes incredibly well with cards like: Elspeth Conquers Death, Solemn Simulacrum, Charming Prince (to gain an infinite ‘enter the battlefield’ loop), and with the addition of Zendikar Rising…

This is a card that has exploded in popularity over the past week. I can’t scroll my Twitter feed for thirty seconds without seeing this ghost in a new standard decklist. But why is it so good?

Skyclave Apparition is a versatile card that can be good in a number of decks and different scenarios. Most decks I’ve seen pair this card with Glass Casket, allowing you to have a clean answer to a token that gets left behind. Apparition deals with a variety of diverse threats. You can stop an Anax on turn three before you Shatter the Sky. You can cleanly exile a Stonecoil Serpent without your opponent getting any value. You can also take care of some other good noncreature permanents such as Mazemind Tome and opposing Glass Caskets. With Yorion, you can easily pick off various threats while giving yourself time to deal with the inevitable tokens that come from Apparition leaving the battlefield. Apparition doesn’t match up great against some popular removal spells of the format, such as Bonecrusher Giant, but I really love that idea that this card can remove a threat, without triggering any dying effects, while also giving you some time to manage the board.

Both Yorion and Skyclave Apparition have found themselves in a variety of Selesnya, Bant, and UW decklists (some clocking in at 60 cards), which have popped up both on Twitter and more importantly in some competitive events this past weekend.

While there aren’t many competitive events happening right now, two large standard events took place this past weekend that gave us a look at what people have been playing in new standard: The CFB Pro Showdown and the Bash Bros Battles #2 tournament.

The CFB Pro Showdown is a monthly event run by Channelfireball, where subscribers to Channelfireball’s articles get to play in a single elimination tournament, where the winner faces off against an endboss of CFB’s choice, in this week’s case, Luis Scott-Vargas. The CFB Pro Showdown had 274 players, and looking at the data of the event the most played strategy was Rakdos Midrange (10%), while the total number of Yorion decks of various flavors came in at roughly %.

While the Top 16 had a variety of different decks, such as Abzan Midrange and Jeskai Control (link in titles) the two decklists I’d like to talk about here are from the finals: Magic Pro League member Ondrej Stratsky vs. Magic Rivals League member Luis Scott-Vargas. The finals was a Yorion showdown with Ondrej on a midrange GW Yorion build and LSV on a UW control Yorion build.

This list originates from Bryan Gotblieb’s late night Twitter standard ramblings, but honestly the deck is surprisingly strong and synergistic. The goal of this deck is just to get into a strong enough board position where you’re generating a ton of value through your engines such as the Charming Prince and Yorion loop or through your Trail of Crumbs. Kogla, the Titan Ape and Wicked Wolf act as your removal suite with Elspeth Conquers Death taking care of noncreature permanents. I think this deck is probably incredibly well-suited to take down the various aggro and midrange decks that have been popping up in Standard since the most recent banning, and it’s also tuned to have game vs. Rogues. While this deck prompted Ondrej to have an undefeated run up until the endboss, the final match of the tournament did reveal one glaring weakness of this deck…

Ondrej was defeated at the hands of LSV and his UW Yorion deck. While GW Yorion can generate a lot of value and board presence, ultimately Ondrej’s decklist had little to no answers outside of the one copy of Run Afoul and the two copies of Shatter the Sky.

LSV’s UW deck is also more inline with Stratsky’s deck than a traditional control deck stock with counterspells and planeswalkers. Instead, LSV has a variety of flicker targets, such as Mazemind Tome, both Omens, Birth of Meletis, Alirios, and Solemn Simulacrum. There’s also a Thassa hanging out to provide some more value in these midrange matchups. What’s great about this list is that it’s prepared for a meta of more midrange Yorion and creature decks. LSV goes over the top of these decks while packing maindeck wrath effects and Dream Trawler, which can be difficult for these non-counterspell heavy creature strategies to come back from. Luis also has access to a swath of cards suited for a control mirror with four Shark Typhoons, two Mystical Disputes, and extra Negates in the sideboard. I could definitely see this deck packing another Tralwer maindeck. I also really love playing a one-of copy of Sea Gate Restoration in these strategies. I think the cost of playing one copy isn’t that large and it can easily replace a Triome in this deck. I honestly love the idea of landing a Trawler and killing your opponent on the spot after triggering your Dream Trawler five or six times. I could also see this deck adapting into more of a control-based strategy, perhaps shaving on cards like the Alirios, Thassa, and Solemn Simulacrums for additional Dream Trawlers, Shatter the Sky, Mazemind Tomes, and potential counterspells. With all of these midrange Yorion decks running amuck there are bound to be decks that can take advantage of the cards they don’t have access to.

Another event that took place this past weekend was the Bash Bros Battles #2, a tournament run by brothers and pro-players Brad Nelson and Corey Baumeister. With this event taking place the day after the CFB Pro Showdown and only 46 players, Yorion took up a much larger percentage of the metagame compared to the CFB Pro Showdown. Yorion decks came in at a whopping 36%. While that number certainly is high, keep in mind that there aren’t many tournaments happening and this event took place immediately after LSV took down the CFB Pro Showdown after Ondrej’s 9-0 run.

While Yorion was almost a third of the field, surprisingly the finals pitted two titans of the game on non-Yorion decks against each other: Brad Nelson and SandyDogMTG. SandyDog is an avid red player, but made the ‘rogue’ decision to bring UB Rogues to the tournament while Brad decided that ramp isn’t in fact dead, bringing a Genesis Ultimatum Temur deck to the table.

I think this deck perfectly takes advantage of the midrange Yorion decks. With those decks packing little to no counterspells, Temur ramp is able to swiftly execute its plan of resolving a Genesis Ultimatum and getting a one-hit K.O., which Brad did many times during the event flipping over multiple copies of Terror of the Peaks. While this deck is nowhere near as busted as the Omnath ramp decks were, I think this deck is great in metagames like the current one, where there aren’t a lot of decks packing counterspells. Which makes it only fitting that SandyDog would take the title of champion in this event.

This isn’t too different from Seth Manfield’s Grand Finals Top 8 deck, except SandyDog is leaning heavier on Ruin Crab and Merfolk Windrobber. While I initially thought Yorion might have the edge vs Rogues, SandyDog has proven that Rogues is still a top strategy. I think after the bannings the format was thrown into a bit of chaos and people clung to other strategies instead of improving upon the non-banned decks of the Grand Finals. It’s pretty telling that SandyDog identified Rogues to still be a consistent and powerful deck which led to his inevitable win. Funny enough, Brad Nelson even predicted early on in the event that he’d be facing off against SandyDog in the finals, with SandyDog defeating him. While Yorion was a major player in this event, in many different forms, it’s interesting to see Rogues and a newly adapted Ramp deck end up in the finals.

In conclusion, it’s still too early to see if Yorion will remain the best strategy in the format, but it is a formidable one indeed. While looking at two smaller events definitely isn’t enough data, they at least can show us how the format is starting to shape up. Yorion is a major metagame player but multiple strategies are highly competitive, such as Rogues, Temur Ramp, and various other aggro decks. SandyDog’s switch to UB Rogues this past weekend is a tell that Mono Red might not be in the best spot, but it at least shows that Yorion isn’t the end all be all. This coming weekend is the MTG Arena Open and I’m probably going to be sleeving up (figuratively) a Yorion strategy myself, but I’ll probably be leaning towards a UW control deck.

As always, thanks for reading and let me know what you’re planning to play next weekend! Are you crushing with Yorion decks, or have you found the right tools to beat them?