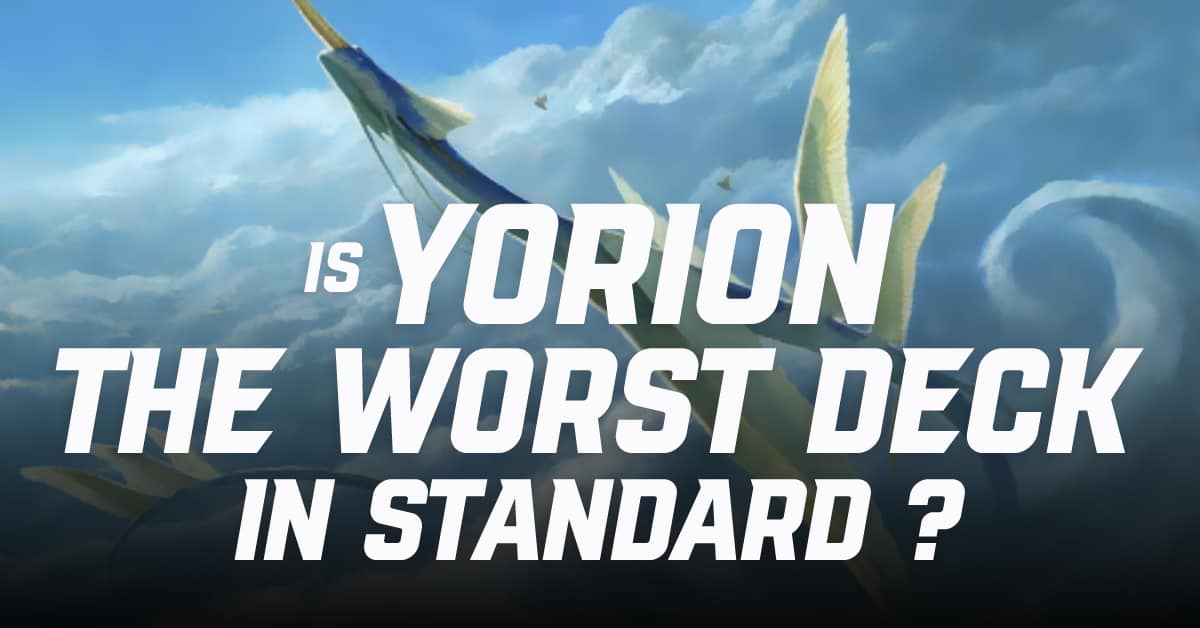 With the dust finally settled after the Omnath, Lucky Clover, and Escape to the Wilds ban, Standard now seems to be in a healthy spot. Multiple large tournaments have transpired since then including the October Zendikar Rising League Weekend and the Redbull Untapped Finals. Out of these events and others we now have some clear data about what decks are performing well in the current metagame.

First, let’s take a look at the Win and Loss % from the October Zendikar Rising League Weekend, courtesy of MTG Data (@MTGData):

While Azorious Yorion was the most played deck of the weekend, it only boasted a 26.8 win% while Gruul Aggro finished with a 65%. Worthy of note, Gruul Aggro was Rei Sato’s weapon of choice bringing him to 11 match points and the highest standing player at the end of the weekend. Rakdos Midrange, piloted by four players including world champion Paulo Vitor Damo Da Rosa, came in at the second highest win% at 60.4%. Rogues trailed closely behind.

There are a couple of interesting things to note about this data and how standard has evolved since the Omnath ban. The “big three” decks stand out at Yorion strategies, Gruul Aggro, and Rogues. Rogues beats on Yorion but loses to Gruul (and Rakdos). Gruul beats up on Rogues (and surprisingly beats up on UW control). Yorion sadly loses to everything. Although it’s important to keep in mind that this is one event, filled with highly professional players preparing for a specific metagame. I think for this specific tournament Yorion had a big target on its back as it was assumed to be the leading strategy post-Omnath ban. This led to its inevitable defeat by Rogues and the rising of R/B midrange and Gruul as the leading archetypes in the current standard.

As a hardcore control player I’m always looking to adapt and improvise when the format becomes more inhospitable. While I recognize Yorion has faults, I do think that the right configuration can have a good matchup vs Gruul, Rakdos, and maybe even U/B Rogues. I also believe Yorion has a good matchup against some of the fringe decks of the format, including Temur Ramp and red-based Irencrag Feat Ugin decks. I also think R/B is winnable too, with the right card choices.

This past weekend I played in the Angela Chandler memorial tournament on MTG Melee. This was a fantastically run event celebrating the life of L3 judge, Angela Chandler. I hadn’t tested extensively with U/B Rogues, nor was I a fan of playing Gruul, so after scouring Twitter for people doing well with U/W Yorion in the Arena Open, I decided to register this list:

While 5-3 isn’t the most exciting record, I was pretty happy with how the deck performed overall, and I think going forward Yorion can be tuned to compete with some of the competitive decks in the metagame. While I lost a close match to Gruul in round one, I felt pretty confident in my other aggro matchups. My rogues match felt close too, although I got beat pretty bad in game three to an opening of Thieves’ Guild Enforcer, double Soaring Thought Thief with Mystical Dispute and Drown in the Loch backup for my turn four Shatter the Sky, which I was hoping would turn the game in my favor. The ramp matchups felt like a bye. I surprisingly lost to G/W Yorion, but my opponent was able to get a strong start both games with early Trail of Crumbs and indestructible Wicked Wolves before I could land a Dream Trawler to take over. Vivien, Monster’s Advocate is also another threat that can be annoying to deal with if not answered immediately.

Realm-Cloaked Giant: I wanted another wrath against various aggro decks I expected to face throughout the event. While this card is a blank against Bonecrusher Giant, it at least wipes away a board of Lovestruck or Questing Beats without letting your opponent draw a card for their troubles. I figured Gruul would be a large metagame percentage of the event with its strong performance in previous tournaments.

Waker of Waves: I’m a strong proponent of this card in decks with access to Elspeth Conquers Death and blue mana. While it never is as great as Omen of the Sea, Waker is a great split card in a deck with not a lot of creatures to return with ECD. I also had multiple games where I cast Waker as an end-game threat or a way to slow down Gruul. IMPORTANT: If you play this deck on Arena make sure to put a stop in your upkeep. If you have an Elspeth Conquers Death on chapter two and you draw Waker, you can activate Waker in your draw step or with the ECD third chapter trigger on the stack to immediately bring it back to the battlefield. I almost lost a game against Gruul where I didn’t have anything in my graveyard and lost out on a turn seven 8/8.

Giant Killer: I’m also a huge fan of Giant Killer in the current metagame. Giant Killer is not only great against the aggro decks, but it can be a timely removal spell to chop down a large Shark Typhoon token that might be trying to block your Dream Trawler in combat. Giant Killer also deals with Kroxa and Ox of Agonas and can beat up on opposing Yorions. I had a pretty close game against Gruul against Evan Erwin where Giant Killer held back an Embercleaved Bonecrusher Giant to buy me enough time to deal with my opponent’s future threats. I would play more copies of this card in the future.

Brazen Borrower: Brazen Borrower is another card I like to have against Embercleave decks. It also can do some fringe things vs Rogues like kill a Shark Typhoon token or block a Soaring Thought Thief. Borrower was actually really useful in my match against R/B Ugin, allowing me to bounce an unanswered Bonecrusher Giant on turn five and then Essence Scatter it away, then chip in for 12 points of damage. Borrower also took the spot of one of the many dead maindeck cards for that matchup.

The rest of this deck is pretty stock. You can change some numbers on the cards and move around things between the maindeck and sideboard but otherwise I don’t think there’s a lot to mess with. I do think you can tune your deck to either include more counterspells maindeck or more cards like Omen of the Sun and a few more copies of Yorion.

After this event there are a couple of main notes I’d make about going forward with this strategy. I definitely want more Giant Killers, probably a split of three somewhere in the 75. I also could see maindecking a copy of Ondu Inversion over a white land, there are a lot of matches where destroying all nonland permanents is more beneficial to you even though you want your Omen of the Seas to stick around for an eventual Yorion. G/W Yorion’s Trail of Crumbs and Viviens aren’t always the easiest to clean up. The Ugin decks have Ugin and Mazemind Tomes. Against the aggro decks it acts as another wrath as well, although getting to eight mana to cast a wrath against an aggro deck is not always in the cards. If Gruul also is on the rise after recent events I’m more inclined to play cards that play to the board (more Glass Caskets, Omens, Yorions) than fill my deck with Mystical Disputes, Neutralizes, and Negates. It’s hard to metagame because both Gruul and Rogues are such good decks, and your answers are a little strained. I think going forward I’d want some counterspells maindeck, since Neutralize is such a hammer against the various random decks of the format. I’d also keep a couple Mystical Disputes or Negates main, but I’d rather focus a little harder on perfecting my Gruul matchup first.

After this past weekend’s tournaments MTG Data posted another metagame snapshot, and this time I was a little more relieved when looking at Yorion’s win%.

I’m actually really happy to see how evened out the metagame is from this snapshot. Most decks hover around 50% with some outliers, like Esper Doom Foretold, which displays the highest win% of all the decks listed, although the sample size is much smaller than that of Gruul and Rogues. I think looking at this data of Yorion’s matchups it’s interesting to note how Yorion has a good matchup against the random decks of the format, but struggles with Lurrus Rogues and slightly struggles with Gruul. If you plan to play Yorion in a future event I’d probably adjust my 75 to beat up on the creature and random decks while packing a lot of my sideboard hate for the Rogues matchup. If you think your tournament will have a lot of Rogues I’d do the opposite. It’s hard to have a read on what people will be playing and it honestly all comes down to what matchups you’ll be facing in the event. You never have complete clairvoyance, even if you bring the best metagamed deck to the table. That being said, if you’re going to play Yorion think of your strengths as a player and what matchups you want to prepare for most – that will influence your individual card choices and keep you the most prepared.

As always, thanks again for reading. If you have any questions or comments feel free to reach me on Twitter or by my email.