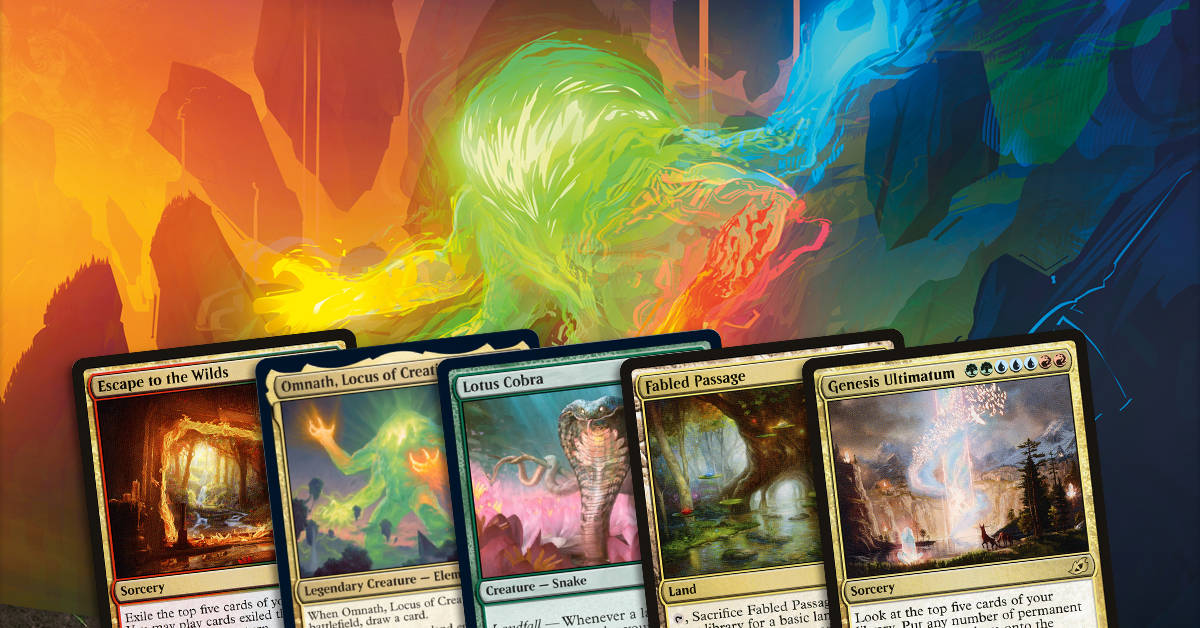 After my article on control decks in Zendikar Rising Standard was published last week I reflected a bit on modal double-faced cards. While I was satisfied with my analysis I underestimated just how powerful MDFC cards were and immediately started working on some new decklists. I was daydreaming about a 4x Emeria’s Call, 4x Sea Gate Restoration, 4x Ondu Inversion control decks up until the point Zendikar Rising went live on MTG Arena. Then I played against Omnath, Locus of Creation and my world changed.

After both playing with and against Omnath I’m still trying to wrap my head around how this card is even real. Omnath immediately reminds me of Uro in the sense that it does so much for such a small mana investment, can be game ending, and is great against pretty much everything. It immediately replaces itself, giving you some insurance if it’s met with a wrath or removal spell. Against aggro decks it’s a 4/4 that must be dealt with, otherwise they run the risk of having their opponent gain life and potentially make a ton of mana the following turn. Omnath does it all. While Omnath is incredibly powerful, a lot of its power comes from the cards that help support it, both in and out of standard. Before we explore Omnath in all of its constructed forms let’s focus on standard for now.

Lotus Cobra is Omnath’s evil henchman. With Lotus Cobra you can easily ramp out an Omnath turn 3. Additionally, it’s awkward to have a basic plains in play when you’re trying to cast a Genesis Ultimatum on your seventh land drop, so Lotus Cobra can solve the issue of not having to fetch up a plains early on in the game.

The real crazy thing you can do with Omnath is play it and Escape to the Wilds together on your turn 4. Wild right? Let’s pause for a minute and look at Inspired Ultimatum.

Now for seven mana, which you have to have exactly the right colors of, you get to draw five cards, deal five damage, and gain five life. Not bad right? Now let’s compare that to a turn four Omnath in addition to cracking a Fabled Passage with Escape to the Wilds in hand. So instead of turn seven, on turn four you: get a 4/4 body, gain four life, “draw” six cards, get to play an additional land, and deal four damage to the opponent and their planeswalkers. Siege Rhino, we’ve come a loooooooooong way.

I remember the day Uro, Titan of Nature’s Wrath was spoiled. I was at a cube draft in NYC on a chilly winter evening. In the office space we were playing in, three-time Pro Tour Champion Chris Pikula sat in his chair dumbfounded as he read Uro’s spoiler. “Why wouldn’t you play this card??” he exclaimed. That quote rings in my head everytime I look at Omnath. Why wouldn’t you play it? On its own Omnath does so much. But when you add Lotus Cobra, Escape to the Wilds, and fetchlands into the mix, Omnath skyrockets in value. It’s no surprise to me that Omnath inevitably won this past weekend’s Standard Challenge.

I’m really in love with a lot of Telsacow’s card choices.

I’m not a fan of Dryad of the Ilysian Grove in these lists for a number of reasons. Dryad is a pretty lame find off of a Genesis Ultimatum and it neither draws a card or searches for a land. It permits you to play extra lands, but I think having your lands tap for any color is a fringe benefit. Beanstalk Giant on the other hand is such a powerhouse. It reminds me of Rampant Growth in that you get a mana back when you cast it, and it can add potential landfall triggers for your Omnath or Lotus Cobras. Beanstalk is an incredible find off of Genesis Ultimatum, especially in mirror matches. How does your Omnath opponent even deal with one of these guys? The only option is to overwhelm them in time or Ugin -7. Beanstalk also just might win you the game if you have Terror of the Peaks already in play.

Kenrith is another all-star that I think should be a one-of in every Omnath deck. There aren’t many mana sinks in the deck and Kenrith fills the void of having something to do if you flood out and can’t seem to draw an Ultimatum or Escape to the Wilds. I usually like Kenrith paired with Felidar Retreat since if you have a big Ultimatum turn and put a lot of tokens into play, it’s nice to haste them all and go wide. Even on his own Kenrith can be a huge roadblock for an aggro deck with 5 life a turn buying you some time.

I’ve never been really impressed with Radha. I feel like Radha usually gets chump-blocked a bunch so their activated ability isn’t always that useful. Radha is better than Dryad because you might get an extra land off the top of your library the turn you play her. I’d just rather have a Cultivate instead.

While I’ve seen a lot of lists play Bonecrusher Giants in addition to Spikefield Hazards to deal with an opposing turn two Lotus Cobra, Fire Prophecy seems really exciting to me. The 4/3 body off Bonecrusher is not always relevant, especially in mirrors, so Prophecy being able to cycle away any card bad in the current matchup you’re playing seems like a win. Also as a deck playing 30 lands and other mana sources, having a way to filter later in the game to find one of your big spells is fantastic.

Overall Telsacow’s list seems tuned for an expected meta of both Mono Red decks and Omnath mirrors. While I would prefer to play more threats main over Thundering Rebukes, Telsacow had a great read on the metagame for this event and was able to dismantle Mono Red in the finals. Going forward I wonder if it’s better to have this many answers for opposing Cobras and Omnaths or if instead Ugins should find their way into the maindeck to have more cards to find off of Ultimatum.

I played a bunch of games over Discord with my Jedi Master Mike Flores and we noticed a couple of things from playing. The deck is extremely forgiving. I had a game where I fetched the wrong land and was a turn behind and another where I misclicked on an escaped Bonecrusher Giant to play it as a 4/3 instead of as a Stomp to let my opponent’s Lotus Cobra live another day. I easily won both games. I did lose one game to Mono Red where I sequenced incorrectly, giving me seven mana instead of eight to play an Ugin and win the game. The deck is just so streamlined that it’s hard to make huge mistakes, although you do have to be mindful of draws where you want to cast both Omnath and Genesis Ultimatum on time.

Omnath is definitely making waves in Standard, but that’s not the only format that it’s making an impact on.

Take a look at this monstrosity:

I’ve been crushing Best of One queues with this list and I have no clue if it’s even optimal. My first thought building this list? Put all the busted mana advantage cards from the past year into this deck. Instead of having your Lotus Cobra shocked on turn two, you can easily avoid that with one of your other eight turn two plays. What’s interesting about Historic from the games I’ve played so far is that the decks aren’t too different speed-wise than standard. I’ve had some close games against Goblins and Gruul for sure, but I can’t stress how easy any matchup is that also isn’t trying to murder you by turn four. Any non-Goblins red deck can never remove an Omnath or deal enough damage to counteract an Uro or gain four life trigger. The only deck I’ve actually struggled with is Mono Blue when I lose the die roll, especially if they have an early Curious Obsession start. Omnath does not play fair and this deck can easily put together multiple triggers and give you access to a turn five Genesis Ultimatum. While I’m not set on a specific sideboard having access to four Aether Gusts and multiple Mystical Disputes seems like the place to start. I’m going to attempt to hit Mythic this month and would not be surprised if others did the same with a similar list. While you can be flexible with cards like Kenrith, Ugin, and Terror of the Peaks, the core of the deck is Omnath, Cobra, Uro, Explore, and Growth Spiral. I also feel like Craterhoof Behemoth should be in this list somewhere.

Like I mentioned earlier, this strategy is extremely forgiving. A deck that flips over cards until it wins is hard to mess up. Sure, you can fetch for the wrong land or sequence incorrectly, but for the most part you’re not making incredibly difficult decisions apart from sideboarding and playing mirrors. Permission is your worst enemy, and you can assuage that with your sideboard choices. But if you ever get matched up against a counterspell deck most of the time your goal is to just jam your powerful cards until something sticks. And when one of your big spells resolve, it’ll be (hopefully) game over.

Funny enough, while I took a break from writing this article, this tweet popped up in my timeline:

While Omnath is the real problem here I wonder if Wizards will pull the trigger and get rid of Uro as well. I think an Omnath ban would make this deck incredibly worse, but it still has legs. Removing Omnath just limits the amount of busted draws you can have. I’m interested to see what ends up getting banned and if Wizards will consider removing Omnath from Historic and Pioneer as well. For the meantime, however, I’ll be jamming Omnath until I can’t anymore. The craziest thing about this ban is that Uro isn’t even the problem card in this scenario, but maybe Uro will be met with the same fate in an attempt to balance the format.

What are your thoughts on Omnath? Will it inevitably meet the banhammer in all of these formats? What card choices do you like to pair with it? Let me know!