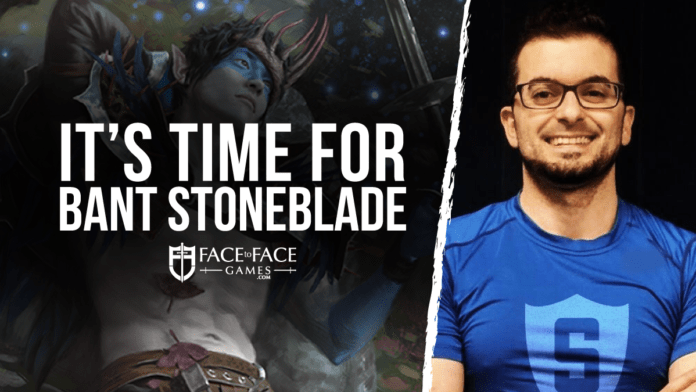 Much like War of the Spark before it, Throne of Eldraine has made a significant impact in Modern, but no other card from Eldraine has warped the format quite like Oko, Thief of Crowns. From Amulet to Urza and many different decks in between, Oko’s presence has proven to be a game-changer for any archetype fortunate enough to play it.

Not only has Oko taken Bant Stoneblade to the next level, as evident from its first place Columbus Regionals finish, but it’s poised to do the same for Bant Control.

If you’re looking to play Hallowed Fountain in Modern right now, you should be looking to do it alongside Oko.

I had the opportunity to chat with Chuckie Davis, who finished 27th at SCG Open Indy with Bant Stoneblade, and Austin Bursavich (winner of GP Dallas with Azorius Control, the first time the archetype ever won a GP in Modern), who has been proficient with a Bant Control list. They thoroughly delve into why Oko makes both archetypes relevant and competitive.

An interview about Bant Snowblade

Neo: First off, congrats on your 27th place finish at the SCG Open with Bant Snowblade. As an avid tempo control player, I appreciate this hybrid because it incorporates more versatility and proactive pressure, while retaining a considerable amount of interaction.

Stoneforge Mystic hasn’t really hit its stride in Modern, but I think this direction has potential. I believe Bant plays to Stoneforge Mystic’s strengths, which is to have more creatures to take advantage of equipment and to be more resilient to removal.

Early results also indicate that Oko, Thief of Crowns is a welcome addition to Bant Stoneblade, such as the recent first place list from Columbus Regionals:

How has Oko, Thief of Crowns performed in this deck? What are some notable ways he has impacted the field or interacted with your other cards? What matchups do you think Oko is best against?

Bant Stoneblade IS the REAL DEAL.

Oko is such a deceivingly powerful card on so many levels. But, every other article in the next month will cover that. Why does it work in this deck? Oko is the epitome of a tempo planeswalker. It packages interaction, board advantage and efficiency all in one.

In Bant Stoneblade, we are living the premium tempo life. We want to spend the first several turns of the game efficiently disrupting our opponent while still progressing our own board to a point that we are able to flip from control to beatdown in an instant. Because of Oko’s ability to play both sides of this coin, it is the perfect compliment to our gameplan.

Oko also has some great interactions with certain cards we’re already looking to play, particularly Spell Queller. When using Oko’s +1 ability on a Spell Queller, the flying spirit becomes a 3/3 Elk with no abilities. Guess what? That text that says, “When Spell Queller leaves the battlefield,…” is gone, meaning the card that Queller previously exiled when you cast it is now exiled permanently.

Ok, I’m done rambling about it. “Oko is Broko,” you get it now. The card really shines in so many matchups. I would honestly say it helps give UWx decks an additional angle of attack in nearly every matchup. The life buffer helps against aggro and burn. The grindy nature of the card is a huge problem for Jund and Shadow decks. And we all know that planeswalkers are just good in a general sense.

As for Azorius Stoneblade, I think McWinSauce’s (Tom White) ‘FaeBlade’ and Kyle Boggemes’ ‘QuellerBlade’ have the best iterations so far because they incorporate other elements alongside SFM:

What are some of the key differences between Bant and Azorius Stoneblade? Which matchups do you think are better here than Azorius? Are there any that are less favourable?

Chuckie: I feel that fundamentally, Bant and Azorius are completely different decks with different gameplans. In my opinion, Azorius Stoneblade is still much more of a control deck, but with a package that allows it to turn the corner and become aggressive more quickly than its predecessors. Many control purists will disagree with that sentiment, but the base shell of Azorius Control is mostly intact, with the Stoneblade package replacing the Planeswalkers who formerly served as win conditions.

Bant, on the other hand, knows exactly where its role lies. It is a midrange tempo deck, through and through. Green allows us to get ahead on mana early and make plays that dominate the board while still interacting with our opponents, and as said before, Oko compliments this play-style perfectly.

One significant difference you will see between the lists is Snapcaster Mage. The 2/1 Wizard — which has been a poster-boy of Modern since its printing — is obviously home in the Azorius shell, as there are a plethora of spells at its disposal. But, in Bant Stoneblade, we are attempting to replace instants and sorceries with similar effects attached to bodies. Spell Queller serves as our counter-magic, Ice-Fang Coatl is our cantrip to dig through our deck, Deputy of Detention is our catch-all removal on a stick, and so on. Unfortunately, Snap-daddy can’t flashback creatures, so it has much less impact in Bant, and that is ok.

I feel the primary reason to play Bant is for these three decks: Burn, Jund and Urza. As long as these three decks remain important pillars of the modern format, Bant will be a great option as it is favored in all of these matchups, more so than Azorius. This is primarily because of Oko, but also because of our lil’ snake buddy Ice-Fang Coatl. The card is excellent on offense and defense, is a great sword-holder, and worst case replaces itself. It is insane value for two mana.

That all being said, not all great things come without their costs. I feel this deck is softer to hard combo than Azorius Stoneblade, mainly because we don’t have quite as much hard interaction. Amulet Titan, Storm and Tron are worse for Bant than our Azorius counterpart. 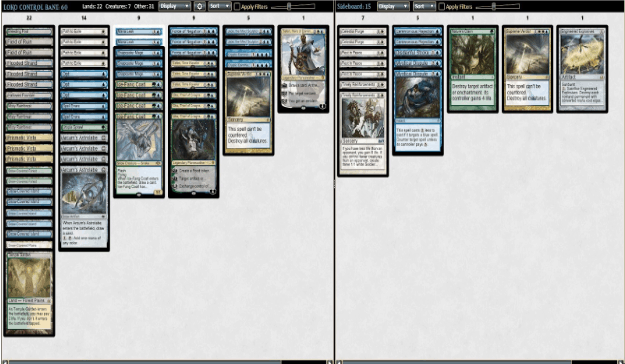 Neo: As we know, Tom White AKA McWinSauce on MTGO pioneered this deck and 5-0’d his first league with it, and recently placed second in a Modern Challenge on 11/3/19:

You then picked it up and went on your own 5-0 run. What has your experience been with Bant Control, or as you call it, LOko Control? What does it do better and worse than Azorius Control?

Bursavich: Deck is great. I think Oko and Astrolabe are the best thing to be doing right now in Modern by a wide margin. I, unfortunately, think Opal and Urza may be a better route than the fair control route, but I wanted to dust off my Mana Leaks and Jace, the Mind Sculptors.

Because of Astrolabe, you can still afford to play some Field of Ruin and your mana is quite good, so no big downside to adding green there. The difference is in the style and play patterns of the deck. Current Azorius Control would likely be based around Mystic Sanctuary and Narset, and I think this may just be flawed in the current environment. Oko is everywhere and Narset is not the best right now.

The addition of Ice-Fang Coatl is really nice, basically flash Baleful Strix, which is an absurdly strong card in Modern Azorius Control, and it happens to go nicely with Oko.

Having Oko lets you do so much more than Azxoriys. You have free life gain in game one versus Burn/Prowess/other Aggro where, before, UW had to dedicate many Timely Reinforcements / Celestial Purge to have a favourable matchup post-board. With Bant, we just need a couple and are very favoured.

Neo: I like that Bant can still play some number of Field of Ruin because of Astrolabe, and also do considerably well vs Burn despite being three colours.

How has Oko, Thief of Crowns performed in this deck? What are some notable ways he has impacted the field? What matchups do you think Oko is best against?

Bursavich: I could write 20,000 Words on Oko and it wouldn’t do it justice. The card is just unbelievable and you need to buy them before they are $300 because they will be a four-of in every deck in every format soon.

It completely invalidates entire strategies (Burn cannot really beat it, expensive creatures and artifacts are now all irrelevant Elks), but at the same time, it is literally good in every matchup.

Oko is at its best versus decks like Death’s Shadow, which play few heavy hitting threats, and are also low on answers once it hits play. Notably, it’s insane against Burn/Prowess due to the incidental life gain. Even vs Tron, Azorius Control, Grixis Control or Delver it’s just such a ridiculous threat on its own that can be tough to answer.

Oko might just be the single best card in Modern.

The Future is Oko

There you have it. Two powerful approaches to Bant that each take advantage of Oko in their own ways.

My take on Bant Snowblade is a variation of Nicholas Montaquila’s:

I’ve included Vendilon Clique to hedge against the big mana decks, an additional copy of Oko and a couple of Condemn to respect Shadow, Burn, and Dredge. Linvala, Keeper of Silence is one of the best tech cards against Urza, Emry, Druid, Ballista and much more (this is probably the most relevant and best she’s ever been in Modern) and two Veil of Summer.

It’s worth mentioning that Ice-Fang Coatl may not be necessary in this version with more spells and planeswalkers.  In fact, Nicholas has been off of it since his Regionals win, replacing it with an additional copy of Birds of Paradise, a fourth Oko and one Spell Pierce. Regarding Coatl, he went onto say:

“It’s the worst card in the deck. Not playing it makes my mana better. It’s always my first cut. I don’t have to play as many basics.”

For further tuning of Stoneblade, consider the following top options:

However you decide to design and revise your list, the following are the current metagame’s top decks you want to focus on beating:

From dramatic unbans and bans, to back to back sets since War of the Spark that have shaped the future of Modern, 2019 has arguably been one of the most game-changing years in the format’s history. Three mana Planeswalkers have been a significant part of that change and Oko has only reinforced this direction. Players are experimenting with many different configurations and combinations to find the best 75 for these little powerhouses.

Whether you’re ready or not, the future is Oko.