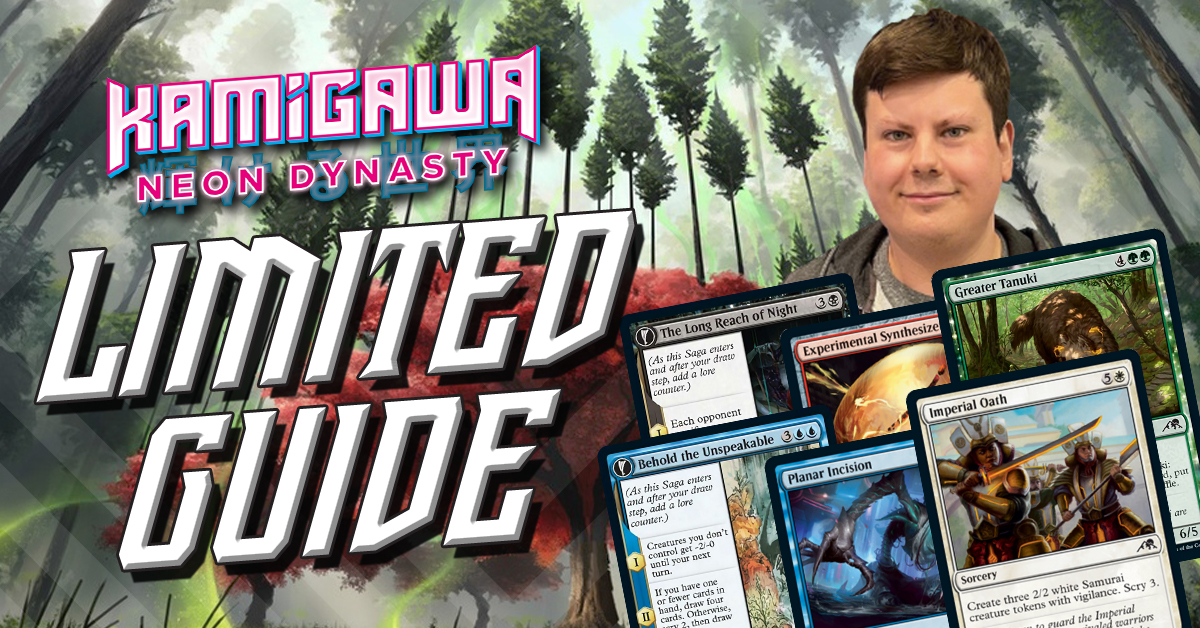 While Kamigawa Neon Dynasty has only been live for only two weeks, it has quickly become one of my favorite draft formats in recent times. In my first impression of the set, I was excited about how many different archetypes and cards were included in the set. Neon Dynasty is by far the wordiest set in Magic’s history, but the benefit of the set having so much packed into it is that there are tons of avenues to explore in Limited.

After a couple successful 3-0’s in paper, I’m starting to figure out what my favorite archetypes and interactions are. There’s so much to explore still in this format. With so many archetypes and cards the format is ever-evolving. Here are some tips and tricks to help guide you through your next irl or Arena draft!

Before I go into specifics, let’s take a look at three of my 3-0 drafts from drafting Neon Dynasty in paper:

There are a couple of key things to note when comparing these three decks. While these decks aren’t a complete guide to the format as a whole, they do say some important things about the basis of the format. Each of these decks included ways of accruing card advantage, as well as splashing for powerful spells. The Rakdos deck aside (which had some important synergies) the other two decks had great Green and Blue bases. I don’t think any of these three decks is particularly aggressive, and would fall into more of a midrange build.

I’ve always been a fan of sagas as ways of accruing card advantage. When played and drafted correctly, these cards can be devastating for your opponent. The sagas are even more valuable in Neon Dynasty since all flip into creatures, some being evasive threats.

In my FNM draft, I was able to land a Long Reach, Mind Rot my opponent, and create a huge blocker that would eventually attack for multiple points of damage. At one point in the game I chump blocked my opponent’s large creature, flickered it with Planar Incision, and got to wrath my opponent’s board on my draw step.

Bounce and flicker effects are just insane in general with the sagas. Planar Incision resets a Behold the Unspeakable at instant speed to negate your opponent’s attack, while drawing you a minimum of two cards on the following draw step. Flickering or ninjutsu-ing an Okiba Reckoner Raid can help you sneak in the last few points of damage in a game (trust me I’ve done this to win two games now). Overall, the sagas provide a ton of value for a pretty low cost. The ceiling becomes high on these cards the more you find synergies and ways to reset them. They are perfect ways to out-grind your opponents.

One of the most important things to know when playing sagas is how to sequence them best. Don’t play your Kumano Faces Kakkazan on turn one if you don’t have a turn two creature to get the +1/+1 counter. Cards that scry such as Era of Enlightenment get much better as the game goes on, allowing you to scry away excess lands that you don’t need in favor of spells to either catch up or go over the top of your opponent. Going back to The Long Reach of Night, you can sequence it before casting your removal spells so you can successfully have your opponents discard cards in their hand before picking off their creatures (if the opponent has no creatures in play they can still choose to sacrifice a creature instead of discarding a card.)

Tip #2 – Know Which White Commons and Uncommons are Best

This is a biased opinion, but I absolutely hate drafting White as a main character in my Limited decks. I’ve always enjoyed playing strategies that play from behind. I love accruing resources that eventually dismantle my opponent’s game plan. This is also why I’m a huge fan of the sagas in this set.

The issue with playing White in Limited is that most of the time White has very few ways of accruing card advantage. White has very little card selection and I feel like White decks usually lean on being more aggressive. White has a tendency of falling prey to decks with higher ceilings. However, this doesn’t mean that all White cards are bad. It’s important to understand in Neon Dynasty which White cards you should be valuing highest.

Currently rated as the White common with the highest win % (via 17lands.com) is surprisingly Imperial Oath. On first glance this card seems a bit weak: six mana for just three 2/2 bodies. However, the scry 3 effect allows you to ensure your next three draw steps will probably be all spells. Imperial Oath is a card that can help you go wide and push through damage later in the game while making sure you can out-spell your opponent.

Another issue with White in this set is that the removal is very narrow and fragile. Take Intercessor’s Arrest for example. This card is easily answered by cards like Moonsnare Specialist and Planar Incision. Also at common is Geothermal Kami. Arrest is also weak against cards with great static abilities or enter the battlefield abilities such as Replication Specialist. Overall, the card can get blanked by multiple commons in the set. The Wanderer’s Intervention is also a bit fragile due to ninjutsu cards and various combat tricks that can put your creature out of the four damage range. With two of White’s common removal spells being particularly weak, it’s important to understand how to leverage your interaction spells.

Again, this is not to say White is bad in Neon Dynasty. I’ve lost to really powerful white decks utilizing multiple sagas to facilitate their draw and Imperial Oath to completely take over the board. I would just be wary of how White cards interact with other popular commons and uncommons in the set.

Going back to my three 3-0 decks, it was incredibly easy for me to splash value cards or removal spells. With common dual lands showing up about once every three packs, it’s usually pretty easy to pick up a couple of on-color duals. My Dimir deck gave me easy splashing for Go-Shintai of Shared Purpose and the Fall of Lord Konda (both which benefited my Kami of Terrible Secrets). Kotose and Gloomshrieker were easy to splash in my Simic deck with a dual land and a Tanuki.

Gloomshrieker was especially solid in this deck with the channel spells. In conclusion, it felt pretty easy to splash for value cards and removal spells in all three of these drafts. Even with a pretty on-theme deck in the Rakdos deck, Gloomshrieker was pretty powerful with cards like Experimental Synthesizer.

With this set having so much card facilitation, either in scrying, looting, or just drawing cards, I usually have about three sources at least to splash one or two off-color cards. For example, if I have a Naomi, Pillar of Order that I want to splash in my Dimir deck, I’d need three sources, whether in lands or spells to facilitate that splash. This could be accomplished either with a combination of three Orzhov or Azorius dual lands, or with one or two lands and fixing spells such as Ecologist’s Terrarium and Network Terminal. I’ve also splashed Imperial Oath in midrange decks that have only one or two ways to make white mana. In those decks, however, I’ve usually had a lot of card facilitation, so by turn six at the earliest I’ve usually found my splash color.

This is a very general tip when drafting Neon Dynasty, but you should always be on the lookout for harmonious interactions between cards. At pre-release I was very impressed with the interaction between Planar Incision and saga cards. That led me to pick Planar Incision highly in decks with cards like The Long Reach of Night and Behold the Unspeakable.

Another interaction I found during pre-release was the combination of Moonfolk Puzzlemaker and Network Terminal. With both of these cards in play you can tap Puzzlemaker to scry 1 first before you loot with Terminal. This was a pretty cool interaction in sealed that helped me throw away excess lands to find my bombs – reminiscent of Blood tokens in Crimson Vow.

In my Simic-based deck I drafted a Weaver of Harmony early in pack three after I had already drafted my three sagas and channel enchantment creatures (I actually called the judge over the confirm I could copy my channel abilities from enchantment creatures). While I never got to live the dream of copying a saga trigger or channel trigger from Colossal Skyturtle, Weaver of Harmony was a welcome two-drop to my deck that had multiple triggered abilities from enchantment sources. In the same pack was a Tamiyo’s Compleation, and I was lacking removal at the time. However, after learning from the judge that I could copy my channel abilities I went in on Weaver. It’s always worth playing with rares that you haven’t gotten the chance to play against or cast, for experimentation’s sake.

There are lots and lots of cool and strange interactions between cards in this set. It’s hard to go over all of them…Geothermal Kami and Gloomshrieker, Circuit Mender with ninjutsu, Kami of Industry with Experimental Synthesizer…the list goes on and on. That being said when you find yourself in your next draft pod try and think about how cards in your current pack work with the cards you’ve already picked.

I know this is a general (and a bit ambiguous) tip, but in a set with so much going on it rings true. What I love most about Kamigawa as a format is that it plays to a lot of my strengths. I love building decks that are either highly synergistic (such as the Rakdos-base artifact deck) or decks that are just big midrange piles. I enjoy limited formats where I can leverage my skill level by playing more defensive decks with solid top ends. In Neon Dynasty I’ve found a lot of success building decks that I both enjoy and feel skillful at piloting.

In comparison to other formats, Kamigawa is similar to some of my all-time favorite draft formats. Khans of Tarkir will always be one of my top three formats, especially due to the fact that you could build so many different kinds of decks, especially midrange multi-color piles. I loved Midnight Hunt for the same reason. In Midnight Hunt I either tried to play streamlined Dimir zombies decks or just four/five-color base-Green goodstuff decks. I really appreciate formats with lots of deck diversity, that reward you for finding interactions between cards that aren’t always so obvious.

While Dimir ninjas is probably my guess for one of the best (if not the best) streamlined decks in the format, I like that you can also just win with Dimir good cards (see the Esper deck above). Kamigawa has so much going on that there are loads of archetypes and styles of decks to try. With powerful midrange cards, diverse removal and threats, unique synergies, and ample fixing at common, Kamigawa Neon Dynasty is a set that can play to the strengths of any seasoned Magic player.

While there are certainly data and statistics you can turn to for card quality and evaluation, sometimes it’s just right to go with your gut. As a great chef once said “just use feeling!”

Kamigawa Neon Dynasty is an exceptionally unique and deep Limited format. I’ve had a blast traversing through the various card interactions and archetypes this set has to offer. Hopefully this article will make this format a little less daunting for you. This format definitely takes some time to get the hang of, but it’s incredibly rewarding.