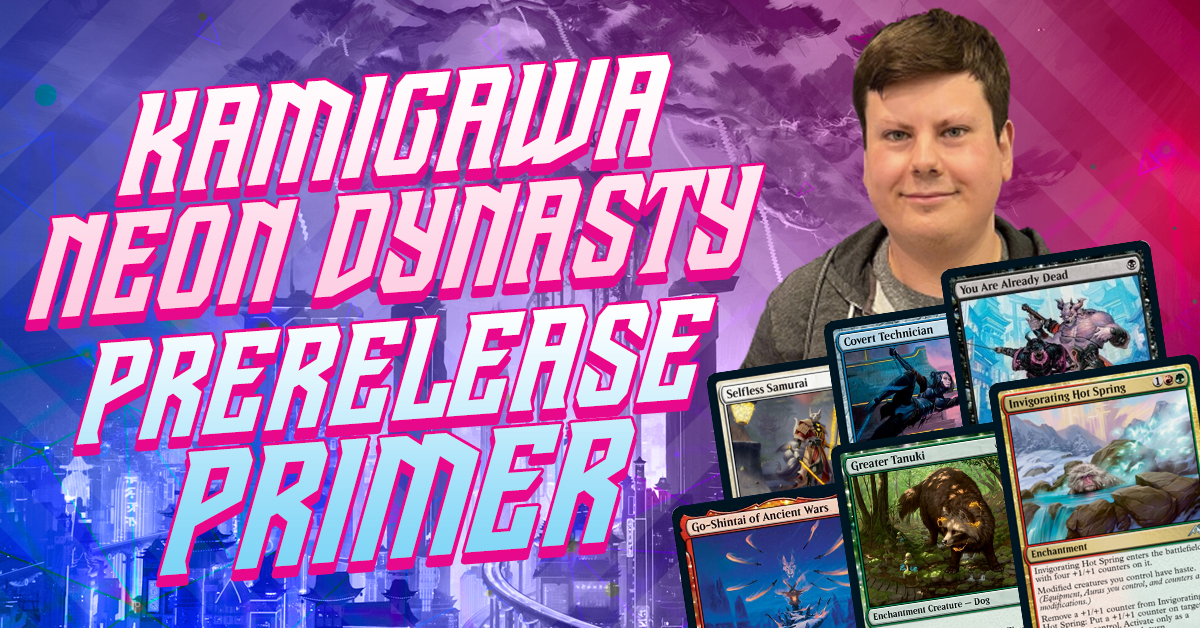 The dawn of a new era is finally here! While I’ve enjoyed my time in Innistrad I’m ready to dive head first into a brand new limited format. Kamigawa Neon Dynasty looks like an incredibly exciting but tough limited format to traverse. The set contains over 300 new cards and has multiple themes including an artifact and enchantment theme as well as the return of ninjutsu and samurai-matters cards.

The set is definitely a lot to take in on first glance, but don’t worry – there’s a lot you can do to prepare for this weekend’s prerelease events on MTG Arena and in paper. Without further ado here are the best ways you can prepare for your Kamigawa Neon Dynasty prerelease.

Know What the Cards Do!

No, seriously – learn what they all do. According to this tweet from Magic data analyst Frank Karsten, Neon Dynasty is the wordiest set in Magic’s history:

Outranking Kaldheim, Neon Dynasty is a format with lots of keywords and wordy new abilities. Let’s also not forget the continuation of double-faced cards with the new saga cards that transform into enchantment creatures.

Since matches and deckbuilding are timed it’s important you know what all the cards do in your pool. Neon Dynasty is a set that also rewards synergy. Whether it be artifact, enchantment, samurai, ninja, or what have you, there are tons of overlapping synergies in this format. With limited time on the clock during deck construction and gameplay it’s best you know what tools you have to work with to help shortcut your decision making. You’re going to waste time by having to re-read unfamiliar cards, especially if during a match your opponent is taking time off the clock having to read what all the cards do. Make sure you know or at least have an idea of what all the cards do so as to maximize your mental energy during the tournament.

There are a handful of mechanics and card types to care about in Neon Dynasty.

Artifact/Enchantment Sub-theme: Neon Dynasty has a handful of “artifact and enchantment” matters cards. There are lots of overlapping synergies between certain cards.

Transforming Sagas: Sagas return in Neon Dynasty – but with a twist. Now, Sagas transform into enchantment creatures upon triggering chapter three. Keep in mind that even though this card transforms the creature side does not get haste the turn it flips (unless otherwise stated).

Reconfigure: Reconfigure is a new mechanic revolving around artifact creatures that can turn into equipments for a certain mana cost. Essentially creature equipments, they’ll cease to be a creature upon equipping.

Modified: Modified is another new mechanic that essentially checks if a creature you control has a sort of counter, aura attached to it, or equipment attached to it. Note that auras controlled by other players, such as Pacifism effects, don’t count towards your creature being modified.

Ninjutsu: A returning mechanic, Ninjutsu allows you to swap a creature with Ninjutsu from your hand with an unblocked attacking creature you control after paying a cost. The Ninjutsu’d cards you put into play are still tapped and attacking.

Shrines: Shrines are also back as enchantment creatures, and all have an end-step triggered ability that cares about the number of shrines you control.

Vehicles: Neon Dynasty is also the most Vehicle-heavy set since Kaladesh block, with vehicles in all sorts of shapes and sizes.

Channel: Channel returns from its Kamigawa roots on a variety of cards. Read below for more info and strategy on the new channel cards.

Synergy is incredibly important in this format. Multiple cards in Neon Dynasty benefit from you controlling artifacts or enchantments or having a high number of specific creatures in your deck, such as samurai and ninjas. Let’s take a look at a few:

However, it’s important to remember that prerelease is a sealed format. In sealed you want to prioritize the power level of your pool. It’s much harder to find synergies in a sealed pool and more often than not you’ll be a three-color midrange deck than an aggressive two-color deck. You want to maximize your rares or other uncommons and your removal spells. However, there are exceptions to this rule.

Innistrad Midnight Hunt and Crimson Vow were two very different sealed formats. Midnight Hunt had lots of removal spells at common and uncommon and less bomb-y rares, so on average it was beneficial to be a three-color deck, usually Green-based. I personally loved playing Sultai in Midnight Hunt since I had access to good creatures and fixing in Green and removal and disruption in Blue and Black. However, my perception of sealed changed with the release of Crimson Vow.

Crimson Vow was an interesting format compared to Midnight Hunt because it had much less removal and more bombs that were hard to interact with. Due to this it was actually correct to be more aggressive in the format if your pool permitted it. Take a look at my 8-0 sealed deck from MTG Las Vegas feat. Flores disciple Etai Kurtzman:

While I didn’t open any insane bombs I maximized my pool by building around my aggressive creatures and solid removal package. Pinpointing that White and aggro decks were much better in Crimson Vow than Midnight Hunt was vital to my deckbuilding during this event.

While I’m not sure if Neon Dynasty is a set where you want to be building aggressive sealed decks, I do think that this set will reward you for finding unique synergies between cards you open. Sometimes it’ll be correct to play cards that on the surface seem low in power-level if they synergize greatly with the rest of your pool. While I’ll certainly be trying to maximize my pool’s power level during prerelease, I’ll also be taking more time to understand how to make best use out of combinations of cards in my pool.

Fixing and Knowing When to Splash

Neon Dynasty actually has a decent amount of fixing at common in this set. First up we have the return of the Khans of Tarkir gain 1 life dual land cycle:

Quick note about these dual lands – it actually isn’t the worst idea to play them in your limited deck just for the life gain. They get worse the more aggressive you want to be but usually in a slower format like sealed it’s fine to play a tapped color source to gain a life.

Outside of this cycle of ten lands we have six other great fixing options:

One unique thing to note about these fixing cards is that they all have some sort added value to them. Great Tanuki is a three mana rampant growth at worst and a six mana 6/5 at best. Ecologist’s Terrarium and Grafted Growth can both modify one of your creatures. Network Terminal can help you loot away excess lands (similar to blood tokens in Crimson Vow sealed). Overall, I like the design of these cards and how they can provide value in various ways.

While your pool may have the ability to splash a third color it’s important to know when to do so. Take Kyodai, Soul of Kamigawa for example:

While I would stray from playing other basics just to activate Kyodai’s pump ability, often enough you might find yourself with enough fixing to pull it off. If you have on-color dual lands and cards like Network Terminal in play you could potentially have access to WUBRG. However, you shouldn’t go out of your way to stretch your mana too thinly. Honestly a four mana 3/3 flash creature with flying is good enough on rate on its own.

In Neon Dynasty we also received a cycle of five mana mono-colored cards each with a quadruple mana casting cost.

Unless your pool has loads of fixing or is mainly mono-colored (unlikely), I’d distance myself from playing these cards. Usually you won’t be able to cast them until turn seven or eight at the earliest and by that time they’ll have rotted in your hand for too long to have any impact on the game. Drawing one in your opening hand is an essential mulligan.

I’d also keep the same lesson in mind for Isshin and Hinata.

Both of these rares are decent, in the right deck however. A four mana 4/4 flying, trample and a great samurai creature are both cards with a lot of potential, but I wouldn’t go out of my way to make my deck worse just to include them. If you have the fixing and the support I’d make an exception.

It goes without saying that Neon Dynasty is an artifact and enchantment-based set. The set features 54 artifact cards and 62 enchantment cards. On average you’ll be playing against some sort of vehicle, saga, or reconfigure card from your opponent so this is a set where it’s totally acceptable to play maindeck hate. In Theros Beyond Death cards like Return to Nature and Mystic Repeal were very maindeckable.

In Neon Dynasty keep an eye out for these hate cards that I’d consider playing maindeck:

Interestingly enough some of the artifact and enchantment hate cards in this set are already stapled onto other cards, such as Repel the Vile and Kappa Tech-Wrecker. Lucky Offering and Explosive Entry might be more niche since they hit only artifact cards, but Fade into Antiquity is a card I’m more than happy to maindeck in this format.

Don’t Forget About the Combat Tricks

While Kamigawa has its slew of standard combat tricks it’s important that you also know about what channel cards your opponent might have access to. With the return of channel, opponents now can represent a multitude of options with open mana, so keep in mind how to play around what combinations of cards they could have with the mana presented. On the flip side you can bluff a trick while holding open a channel ability you were going to activate anyway!

Here’s a handy gallery of all the new channel cards in Neon Dynasty:

Neon Dynasty is going to be a very tricky limited format with so many cards at instant speed. It’ll be tough to always play around what your opponent might have access to, but definitely keep in mind these channel cards that your opponent could be bluffing. Better yet, by knowing what channel cards and combat tricks exist in the format you can also do your fair share of bluffing. You can secretly bluff a combat trick by sequencing a channel ability first to convince your opponent the coast is clear – and then get them with your trick when the moment strikes! I’m definitely looking forward to seeing how these channel cards play out in paper.

Overall I’m super excited to play with Kamigawa Neon Dynasty this weekend. Prerelease is always a fun time to check out new cards and meet new players at your local store. While Neon Dynasty is certainly a daunting set with all of its new mechanics and endless text. However, with enough preparation and understanding of the core concepts of the format you’ll be set to navigate your prerelease event with ease.