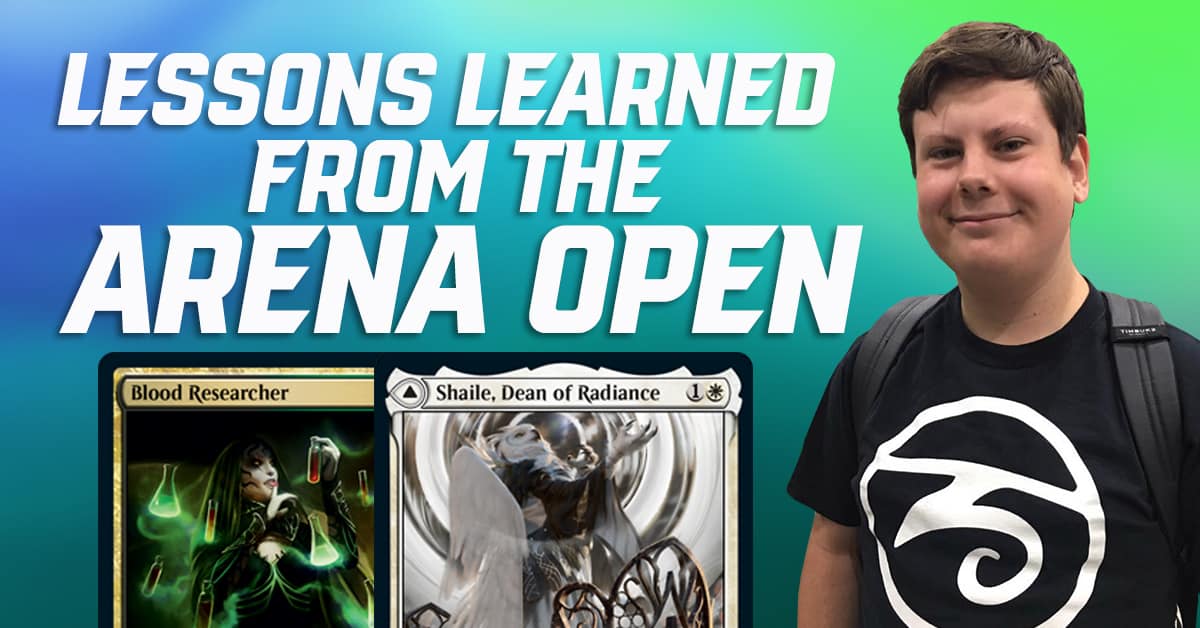 Coming into this past weekend’s Arena Open I had done virtually no practice. Well, that’s not entirely true. I had done a handful of drafts, some IRL sealeds (with vaccinated friends), and one or two sealeds on Arena, but I was feeling fairly confident regardless. This had been my exact strategy with the Kaldheim Arena Open, and based off my performance in that tournament it had paid off. This isn’t to say I didn’t prep at all for this open, but I did most of my learning of the format reading articles and watching streamers, most notably, Sam Black and Michael Jacob.

Strixhaven is a powerful limited format for a few key reasons. The learn mechanic gives you an advantage based on how many lessons you have in your sideboard, and a multicolored format means that cards on average are at a higher power level. Finally, the addition of the archive cards, such as Mizzex’s Mastery and Demonic Tutor, can push some decks over the top. Watching Michael Jacob’s streams in particular gave me a great inherent understanding of sealed as a standalone Magic format. In Sealed, you rely heavily on the overall power of your cards, as opposed to certain “archetypes” or “strategies.”

However, after playing multiple Strixhaven pools and doing my due diligence, I came to a few conclusions before entering this weekend’s open.

My deck did not seem strong in the slightest, and opening double Strict Proctor in two of my rare slots didn’t help. However, with some luck in both good starting hands and die rolls (and drawing Shaile, Dean of Radiance in my opener 3 matches in a row) I found myself at a nice 7-1. While this deck didn’t seem strong upon my first look, it’s exactly what I wanted to be doing on day 1 in Best of One. I had multiple evasive threats: double Strict Proctor, double Combat Professor, and an Owlin Shieldmage. I had a few good combat tricks, and a nice way to abuse mana flood and close out games with Specter of the Fens. Double Mage Hunter also provided a way for some incremental damage over the course of a game. Again, my deck didn’t have any strong bombs or good removal spells for that matter, but it made up for those losses with evasive threats and ways to deal enough incremental damage to steal games. Shaile and Embros were certainly the MVPs of this deck, giving me a few games where I either had fast starts with buffed creatures or games where I stalled against my opponent and was eventually able to grow my fliers to go over the top. The one game I did lose however, came down to a mulligan and drawing eight (yes, eight) lands. I was at least happy my pool built itself and was able to provide games with easy decision-making.

My Day Two Experience was definitely not as easy. I found myself at the start of the morning with another pool with lackluster rares, but with a few various decks I could build.

I took a couple things into consideration looking at these three decks. The deck I was immediately attracted to was my Witherbloom deck, deck #2. My Witherbloom deck had the most synergy of the three potential decks. With double Blood Researcher, double Witherbloom Apprentice, and a host of various lifegain cards, this deck presented cards that synergized well with each other. On top of that, I also had access to my other good green and black rare and uncommon cards: Dragonsgaurd Elite, Overgrown Arch, and Crux of Fate. I had top quality uncommons such as Master Symmetrist and an endgame finisher in Specter of the Fens.

The Silverquill deck was a tempting choice, due to my 7-1 run on Day 1 with a somewhat similar deck. However, outside of Dueling Coach, the deck had no premium uncommons or rares in Black or White with limited removal. I didn’t want to get tunnel visioned after my Day 1 run, where I had much better rares and evasive threats, so I decided to abandon this list. Perhaps I should have considered this build for the games I was on the play after sideboarding, but overall it felt like a much weaker deck than my Witherbloom deck.

Finally, I toyed with a Temur deck. The decision between my Witherbloom and Temur deck was close. In Temur, I had access to all of my powerful Green cards, while also getting access to double Pigment Storm and a Creative Outburst. While this deck had some premium uncommons and two removal spells, overall I felt the power level was similar to my Witherbloom deck, and decided to go for the deck with more synergy.

Unfortunately, after a 1-0 start, being up a game in round two, I faced any mage’s worst nightmare in day 2 of an event: consistent mulligans and mana issues. We’ve all heard this story before, so no need to harp on it. But trust me, starting off 8-1 in an event and getting booted to chance isn’t quite the best feeling in the world. Such is life – grit your teeth and move on.

Instead, I’m left wondering what I could have done differently in my deckbuilding. I do think my pool had some lackluster cards in it, and wish I had one strong rare in a color to pull me in one direction. Part of the beauty of sealed, however, is being faced with challenging options. I was lucky Day 1 to have a pool that practically built itself, so it’s only fair Day 2 gave me more hurdles to jump over.

Looking back, I think I undervalued my Temur deck. I felt in the end that the deck was missing a Bookwurm, or perhaps some Leyline Invocations to pull the deck together. It felt that my deck was too much of a “durdle pile” as I like to call it – too much card draw and not enough punch. However, perhaps I should have relied more heavily on my higher power Green and Blue cards with the added value of having access to a few removal spells. The games I did play with GB that felt good were the ones where I drew my Blood Researches and life gain cards, but when I was missing a piece of the puzzle the house of cards came crashing down. Temur probably gave me the better deck overall. I also should have spent more time seeing if it was possible with my mana fixers to put together a 4c or 5c deck, perhaps one that had access to Crux of Fate, Specter of the Fens, and Go Blank – but I digress.

Regardless of the outcome, preparation for this event and the chance to play in it still taught me a lot about Sealed. I’m at least happy to say I was able to Day 2 two Opens in a row, but I’m still dissatisfied with the results. At the end of the weekend I was elated to find out my local LA friend, Andrew, had come out victorious with 1k, despite opening a Day 2 pool with three (yes, three!) Snarls. Talk about unlucky. Andrew and his Temur Dragonsgaurd Elite deck, similar to mine with just a few more removal spells, barely made it to six wins with less than fifteen minutes of the event remaining. So, way to go Andrew. Props on the 1k and making the most of a pool many people would’ve gotten frustrated opening.

On the flipside, I’ve been piling up trophies on Arena with various Silverquill decks. One positive takeaway from the Open was that I was able to get a taste of the power of being a Silverquill undergrad. Best of One in particular favors aggressive strategies, so curving out a Unwilling Ingrediet or Eyetwitch into an Arrogant Poet into another evasive threat can definitely take advantage of people durdling with Eureka Moments and Field Trips. Here are two of my most recent seven-win decks:

What lessons did you learn from this past weekend, and more importantly, how will you use them to become a better Magic player?