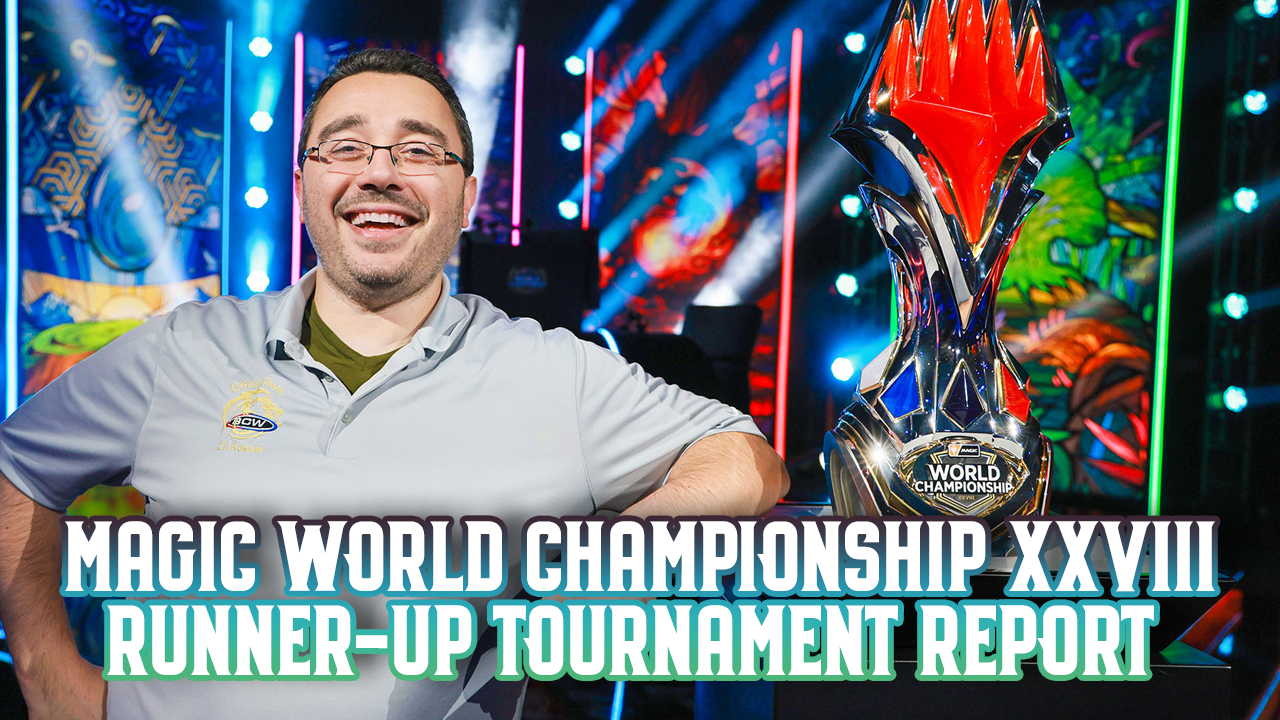 For those that were not watching. I, Eli Kassis, finished in 2nd place at Magic’s World Championships. Thanks for reading!

Our testing team consisted of Jakub “The Amateur Comedian” Toth, Mike “The Siggy” Sigrist, Jim “The Goblin” Davis and myself. The formats of Worlds were Limited, Explorer (Arena’s version of Pioneer), and Standard.

For Standard our team arrived at the same conclusions every team arrived at: Esper Midrange is just too good not to play. It made up 70% of the field for that reason alone. We did, however, manage to discover some tech in testing that let our team get away with a whopping 75% win percentage across the Standard portion of the event.

Ironically, that “tech” was Ludevic, Necrogenius. This card was particularly powerful when paired with Ao, the Dawn Sky. Ludevic is pivotal in winning the Esper mirror.

Overall, I was quite happy with the list. The Farewells ended up not being great, but I was happy with the other cards we played. I might have played 2 Duress instead of the Farewells with perfect hindsight. In the main deck I should have left the 4th copy of Wedding Announcement in. I didn’t particularly care for the Ertai Resurrected as people stopped playing the go-big strategies. Maybe a second copy of Make Disappear could have been okay as well. The last thought was a 27th land as a second copy of Otawara, Soaring City. All in all, not much would have changed even with hindsight.

If you decide to play this deck, remember it is a midrange deck. You want to apply pressure and take the aggressor role. If you sit back and try to play it like a control Esper list you’ll have some difficulties fighting from behind. This deck plays the best cards in Standard and is just trying to jam them on every turn past turn one.

For Explorer the real hero work came out. I played Mono-Blue Spirits and performed a perfect 6-0 record catapulting me into 1st place going into the top 4 of the tournament. Had the top 4 been Explorer I am confident I would have emerged the World Champion. Sadly, it was Standard, but lets dive a little deeper into the Explorer deck that was the premier breakout deck of the tournament.

This is a deck that other players brought to the event, but our team managed to innovate to overcome the bad matchups. The bad matchups used to be everything Rakdos. After we tried Leyline of Combustion in the sdieboard we started destroying the various Rakdos decks. It was weird during testing having the feeling that our deck had no bad matchups. We had more team kills with our deck than field kills and garnished an 87.5% win rate against non-team members playing the same deck.

Let’s talk about the numbers. I had one copy of Shacklegeist, other team members had two. In hindsight I think two copies is the right number. I am just not sure both copies belong in the main deck. There was plenty of room in the sideboard. The one copy of Combat Research was garbage and should not have made the deck. Cemetery Illuminator was actually pretty great, I would’ve liked a second copy.

From the sideboard, Slip Out the Back continued to be an all-star countering removal on rate and buffing creatures. Even removing blockers was relevant in multiple games. A third copy could easily make the deck. Ledger Shredder was another sweet piece of tech we innovated on. This allowed us to have a go-big strategy versus decks where creature size is of the utmost importance. It also gave us a handy way to cycle extra copies of Leyline of Combustion if we drew them past our opening hand. Cobbled Lancer was included because we couldn’t play a fifth copy of Ledger Shredder. We used to have two copies in that spot and trimmed it down to one. After seeing the field though, zero would have been the hindsight call.

We went up to three copies of Brazen Borrower due to Siggy’s advice. I believe this ended up being correct as there was a fair amount of Shark Typhoons in the field. The one copy of Witness Protection was actually our sole answer to an opposing Shacklegeist if it resolved. We deemed that we needed one copy for opposing lords or creatures with abilities that we were not equipped to overcome, such as Sheoldred, the Apocalypse.

It’s hard to be anything but pleased with the deck and how it performed. Some small takeaways from the tournament were that Ascendent Spirit was often a liability. It’s probably better to play this card in smaller numbers. It’s possible to trim a single copy of Lofty Denial from the maindeck as well. You really do not want to tap out very often, so playing flash creatures is very important. Learn how to sideboard in advance because those small decisions end up being very important.

A little bit about my experience playing worlds -this was my second year of playing Worlds back to back. However, last year was entirely online and so this one felt a little different. We were treated like celebrities by Wotc. We had a sweet players lounge where they provided food and beverages. We had our own space and secret entrance. We even had super nice staff that waited on us!

The people all around were amazing. From friendly competitors that made sure everyone felt included to judge staff that tried their absolute best to give us the smoothest tournament experience possible. Even after a loss you could go back to the players lounge and get a wonderful reception that would brighten anyone’s spirits.

I started out with a super fun five-color build in draft., but got stomped in round one. Then I managed to close out the next two rounds which was a relief. 2-1 in Limited is just good enough that most players would accept that record if they could skip that portion. Only the sickest of sickkos would expect a 3-0 in that difficult of a field.

I was lucky enough to win the first Esper mirror of the weekend once the Standard portion of the tournament rolled around. However, I proceeded to lose the next two mirrors, including losing to my own teammate Jakob Toth (who I would end up playing three times in the event!). At 3-3 I got a little sad because I knew I was already on the cusp of elimination, but I was determined to still give it my all.

Getting paired against two decks that were not Esper to end the day felt pretty lucky. I first faced a Bant Tokens deck that we actually tested and threw out because it wasn’t beating Esper. So I was quite happy with the matchup and got the 2-0. Then I found myself facing down Greg Orange and his Azorious control deck. He had already beaten Siggy and we had not tested against this deck in testing.

When I lost game one to overwhelming card advantage I already began to fear the worst of the outcome. Fortunately for games two and three I ran hot and my opponent did not. I ended my day one at a very respectable 5-3 and sitting in 8th place. After a good dinner and a nice night’s rest I came back prepared to battle Explorer. I was roaring and ready to go.

As I mentioned already I got the 6-0 on this day, but unfortunately I had to dismantle two of my teammates to do so. Fortunately we all did pretty well with this powerhouse of a deck. Securing places 1st, 2nd, and 5th at the end of day two.

In the Top 4 I first faced Nathan Steuer on Grixis. With the higher seed I got to choose to be on the play, but that didn’t matter as I lost game one anyway. Fortunately I was able to steal games two and three to ensure I could not finish 4th. My teammate Jakob Toth also won his quarterfinals match and we got to face each other in the upper bracket semifinals. I proceeded to run hot on drawing Ao while he did not. This moved me into the upper bracket finals.

From there I got to play the waiting game as the other members of the Top 4 battled it out to face me in the finals. Eventually, it would be Nathan who would emerge victorious. In our best of three matches finals bout, we started the same way our first Top 4 match went. He took the first game and I was able to squeeze out games two and three. Unfortunately for me, that’s where things started to go downhill. I had gone on an eleven win streak at Worlds, which is super super rare. I used up all my luck because I would not win another match in the tournament. I only managed to win one game out of the next two matches. That was it, my tournament was over, and despite being 14-4 and having the best record in the tournament it was only good for second place.

All in all I was very happy with my finish. Nathan is a worthy champion. He’s not only a wonderful friend, but a highly skillful and scary opponent as well. I’ll be a little sad for a bit as I had a wonderful place picked out to hang that gigantic trophy. It did however light another fire in my belly to come back to worlds next year with my eyes set solely on the prize. After the event I left for some delicious bbq with friends. We did an escape room to take our minds of the very heavy tournament. The next morning we set out on our journey home with the next big event on our minds.

Thanks as always for the support of everyone who has ever and will ever be rooting for me on the sidelines. It really does mean a lot to see and hear the nice things you have to say. Hopefully I’ll see everyone here very soon in Atlanta for Dreamhack!

Rooting for you next year!

sorry im aware its likely unrelated but could someone get in touch with me with a working link for this decklist plz? https://magic.facetofacegames.com/a-guide-to-rakdos-reanimator/