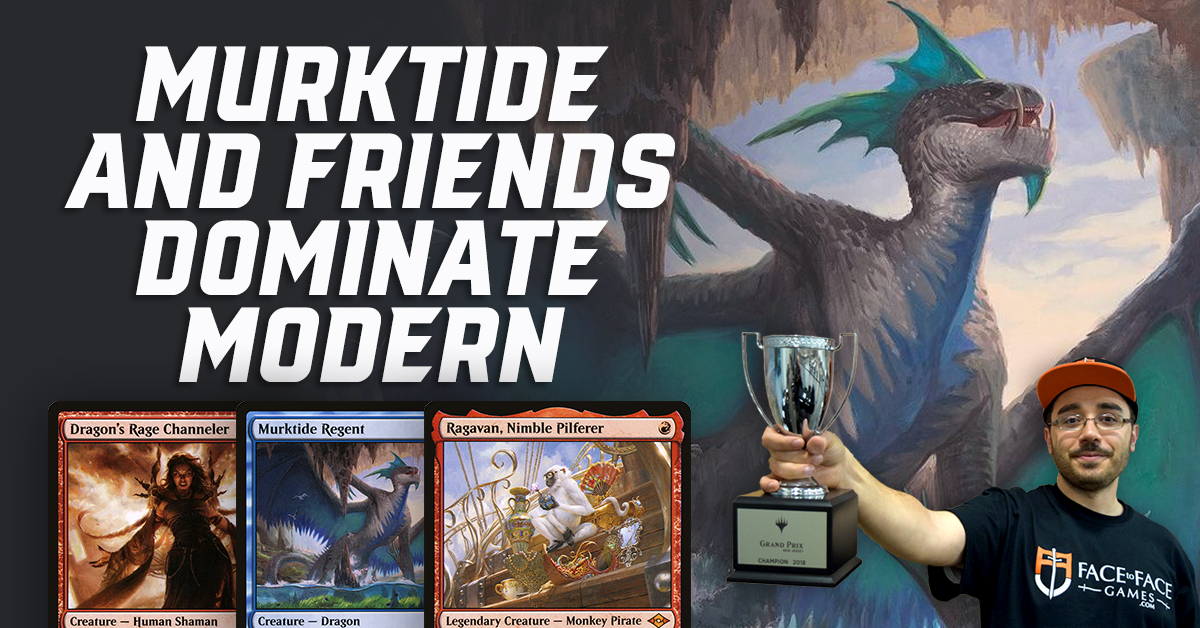 Recently my local store, From the Vault Games, hosted a Modern 2k. The expected attendance was around 40 players or so. Due to the popularity of the format an awesome 70 people showed up despite the store advertising they were closed for signups a week in advance. Due to fortunate circumstances, the store made room for the additional players!

From the Vault Games is a store owned by Adam Phillips in Syracuse, NY. As a former player at my old shop, Adam is accustomed to running some awesome tournaments. Every month he hosts a $2,000 Legacy tournament and Modern tournament. When attendance exceeds expectation he ends up raising the prize support!

After testing as many Urza shells as I could, I abandoned the High Lord Artificer for one of my new favorite creatures: Murktide Regent. Murktide Regent hasn’t been around Modern for long, but it’s already made quite the splash in the format. Spending two mana to make an 8/8 flyer is honestly just too much value to pass up on. It reminds me of another certain 8/8 that unsurprisingly got the banhammer soon after it was released… Cough cough… Hogaak.. Cough.

To feed Murktide Regent properly we want a mass of spells and a solid blue mana base. This has put cards like Thought Scour back on the map in Modern after a year or so of it seeing very little play. With the addition of Murktide four copies of Thought Scour are an absolute must. Heaven forbid you have one out with a big graveyard and your opponent happens to target you with Endurance. Red has shown itself to pair exceedingly well with Murktide Regent as it forces through extra damage, has the lowest average mana value spells in the format, and gives us a diverse range of sideboard options.

Izzet has already been streamlined well before this event took place. Decks typically have a frame that looks like this:

I’m sure there’s plenty of other cards people have tried, but these are the ones we are seeing repetition with. Many people have preferred 1-2 Archmage’s Charm, 0-1 Engineered Explosives, 2-3 Serum Visions, and 0-1 Brazen Borrower. My personal preference is 1 Archmage’s Charm, 1 Engineered Explosives, 0 Brazen Borrower, 1 Spell Pierce, 1 Snapcaster Mage, and 2 Serum Visions.

For the graveyard we are actually in a complicated situation. Nihil Spellbomb is worse than Tormod’s Crypt and Tormod’s Crypt isn’t very strong against the majority of the graveyard-based decks. It can be narrow and mediocre. By the same token, Surgical Extraction can be an insufficient answer for decks like Living End or Dredge. Relic of Progenitus has been a popular choice, but you’ll need a mana up to truly threaten its useful exile affect and we are after all a deck with 18 lands plus sorcery speed threats. The other downside of Relic of Progenitus is that it may remove important graveyard resources if you pop it off. Soul-Guide Lantern feels like the best choice we are left with. It can avoid friendly fire, pop off on the cheap, and cycle when needed. One to Two copies is not significant enough to matter and four may be too much space in the sideboard for the Modern format. So, three copies is where I would recommend landing.

For attacking mana bases, the tried-and-true option is Blood Moon. Cards like Alpine Moon are a tad narrower. Even though Urza’s Saga decks are better punished by Alpine Moon which effectively creates a one-mana Stone Rain (we used to say Sinkhole!). There are also fringe cards to consider such as Spreading Seas and the somewhat new tech, Cleansing Wildfire. There’s also older bad cards like Tectonic Edge and Ghost Quarter. Blood Moon has the diversity we want and another angle of attack for many builds. Since it’s a three-mana spell, it’s best to play exactly two copies – just enough so that you can hope to draw and cast it somewhat on curve.

Control decks present a tricky angle to combat. In Legacy we have Pyroblast to stay ahead of their Planeswalkers. In Modern the tradeoff is definitely worse, but Mystical Dispute is the right card for the job. Dispute makes an excellent addition as it comes in for the mirror matches which tend to be all about landing my new favorite card, you guessed it, Murktide Regent. Two to three copies are probably the right amount. With four you’ll find them becoming useless when your opponent starts having a lot of extra mana. With one copy you won’t draw it enough to matter as much.

To increase our threat density and diversity in this matchup I recommend Seasoned Pyromancer. It doubles as a great card against Rakdos decks and isn’t bad for the mirror either. Two copies is the most I’d recommend as we do not want to increase the average Mana Value of the deck too much while only playing 18 lands.

Finally, let’s account for creature decks. Because of the popularity of Crashing Footfalls, Engineered Explosives has become the front runner sweeper in most sideboards. Personally, I like two copies of Engineered Explosives because of its ability to remove a Chalice of the Void. Two copies of Abrade also doubles as an answer for Chalice of the Void and additional removal for decks like Humans. Kozilek’s Return is a go-to if you anticipate protection from red creatures. However, K-return is metagame dependent and would never play more than two copies for the same reasons as listed above.

At the 70-player event I was fortunate enough to start out 5-0, then double drew into the top 8. My quarterfinals opponent had a sweet Jeskai Urza brew and thoroughly pummeled me game 1 with some giant constructs. Fortunately, I was able to salvage games two and three with some solid starts and my opponent stumbling a bit.

In the semi-finals my opponent had a super sweet Temur Reclamation brew, based on a much earlier build popularized by Autumn Burchett. Fortunately for me Murktide Regent is a threat that’s hard to kill with Temur colors . In the finals I was fortunate enough to face my good friend Jake Saracino playing the mirror. After prize splitting, we decided not to play it out and had a much-needed sushi dinner.

I suspect if you want to stay ahead of the meta you should consider avenues this deck may evolve into in the future. Thought Scour may certainly get replaced by Consider, the new Opt-like card from Innistrad: Midnight Hunt. The instant speed effect helps fuel Snapcaster Mage, which may end up seeing more play with more cheap Blue spells that fuel the graveyard. Gut Shot could be an effective card with more Snapcaster Mages to combat Hammertime decks or opposing Ragavan decks.

There’s not much I would recommend doing differently from what I stated above for the current meta, however. While it’s important to pay attention to the shifting meta and test different cards I would stay as close to the original as possible. Thanks for reading and see you all next time!