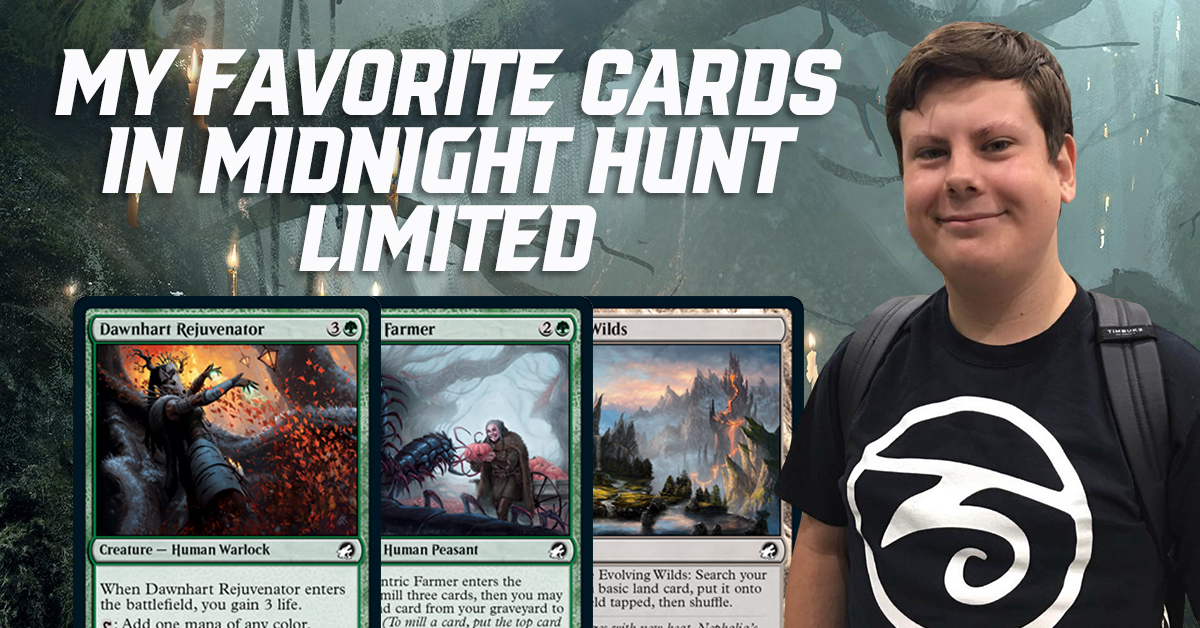 Innistrad sets have always had a special place in my heart. I began playing Magic back during Scars of Mirrodin, and at the time was not super enthralled with the artifact-based set that had returned to a plane I knew nothing about. However, when Innistrad rolled around in the fall of 2011, a spark was ignited. The gothic horror lore, chilling art, and double-faced cards were so incredibly interesting to me. After that, I was hooked.

While I didn’t draft the original Innistrad sets a ton (I was still in high school at the time) when Shadows over Innistrad and Eldritch Moon rolled around I was a college Sophomore drafting 2x a week in the Big Apple. During Shadows I loved drafting decks like Golgari Delirium, graveyard-value based decks that relied on grindy cards to slowly, but surely, dismantle your opponent. I loved the idea of the graveyard as a resource in combination with the horror theme of the set, so it was easy for me to draft these grindy decks. Flashforward to 2021…

If there’s one important lesson I’ve learned about Limited over the last year of playing exclusively on Arena and watching streamers, it’s that you can learn a lot about a format from playing Sealed. One of my all-time favorite streamers, who I’ve definitely learned a lot from in the past few months, is Darkest_Mage, aka Magic Online Champion and Worlds Champion Michael Jacob. Darkest_Mage prides himself on his Sealed capability, and from watching his analyzation of various formats and individual cards I’ve learned a couple of key lessons:

-White and Red lack the invulnerability that Blue, Black, and Green have

From all of the Midnight Hunt Limited I’ve played in paper and on Arena, I’ve kept a pretty consistent winning record, probably at least above 60%. While I haven’t drafted the set a ton on Arena, I’ve felt confident in my prerelease, draft, and competitive Limited events in paper that I’ve playing, maintaining at least an X-1 record in every event I’ve played thus far. I’ve had some interesting drafts on Arena too, which I’ll talk about in more depth in this article, but for the most part playing Best of One on Arena and playing a regular match in paper are two completely different beasts.

My favorite decks in Midnight Hunt Limited are at least three colors and most often are Sultai-based. While you have aggressive White and Red strategies, you have exceptional graveyard strategies. In Midnight Hunt Green has access to a multitude of cards that fix your mana, which gives you access to powerful cards to splash in your decks. The graveyard acts as an exceptional resource, allowing you to take advantage of your Disturb and Flashback cards. While I’m a bit biased since I enjoy non-aggressive strategies, Midnight Hunt has a perfect combination of cards across Sultai colors that can give you an incredibly grindy, value-based deck.

Let’s take a look at this draft deck on Arena that I 6-3’d with:

Here’s how a few of my games went, and yes, I won every game I had this happen to me…

This deck was definitely a bit lucky in its fixing, but it does highlight a couple of key things I love about this format. While I did have four Evolving Wilds (thanks Arena AI) the Green-base allowed me to take and splash a variety of powerful cards in my draft. If my opponent didn’t put enough pressure on me in the first few turns I was able to solidify my boardstate with a large 4 or 5 toughness creature and begin gumming up the board until I drew one of my late game threats. Let’s dive a little deeper and look at some of my favorite cards from this set that constitute as the base for these kinds of decks:

These cards act as the base of the deck, giving you ways to access all of your colors of mana. Eccentric Farmer not only helps fix your mana, but can bin a Flashback or Disturb creature you can cast later on, essentially acting as a creature that can block 2/2s while drawing you 1.5 cards on average. Dawnhart Rejuvenator fills a similar role, putting in play a large blocker that undos some of your opponents’ previous attacks.

The reason to be playing Black in these Green-based decks is to take advantage of the premium removal that exists in Black at common and uncommon. Diregraf Horde isn’t exactly removal in the traditional sense, but if you sequence it correctly you can snipe two of your opponents Disturb or Flashback cards to set them off from some serious value. Horde also provides an outlet for you to play an Eaten Alive for one mana.

For a deck that spends the first couple of turns solidifying it’s board state and mana base, it’s vital to have cards later on that will out-grind your opponent. I’ve been very impressed with Shadowbeast Sighting. A 4/4 is a tough body to get through for your opponent, unless they have an X/5+ werewolf in play. As long as you can stabilize your board it’s completely fine for your opponent to waste a combat trick or removal spell to get it off the board since you’ll have another 4/4 in only a few turns. I’ve been less impressed with Rise of the Ants, but it is pretty great at gumming up the ground. Contortionist Troupe is one of my favorite cards that snowballs if unchecked – you have the flexibility to play it on turn two as a 1/1 to grow your board a few turns later, or as a large body late into the game. Dawnhart Mentor is also a great 4 toughness blocker than can turn the tide in your favor, threatening to give any of your attackers +3/+3 (or more) and trample.

With multiple cards that self-mill, such as Eccentric Farmer, Organ Hoarder, and Covetous Castaway, it’s useful to take advantage of your graveyard. What better way to take advantage than casting your Disturb creatures? The Disturb creatures are important for a few reasons. Aside from utilizing them with your self-mill cards, they act as their own individual threats that block well on the ground. In some cases they’ll act as a defense against your opponents’ flyers. A Disturbed Baithook Angler trades with a Disturbed Overwhelmed Archivist for example. While you’re gumming up the ground with tokens and high toughness creatures, your disturb creatures will be the key to solidifying your boardstate in the air and your key to having profitable attacks.

5. The Other Key Commons and Uncommons

These are a couple of the cards to look out for in the middle of the draft. They all provide some value and can draw you deeper into your deck when you’re searching for your finishers. Silver Bolt in particular is a nice removal spell to have since it kills a large portion of the creatures in the format while being completely colorless. The deathtouchers can trade up at equal or more value. Startle digs a card deeper while providing a body for a spell with a sacrifice clause. Candleguide is a little underwhelming but can be helpful if you need another card to fix your mana base.

6. Cards to Splash For and Rares

To round out this article I want to talk about the cards I think are worth splashing for and some of the rares that would benefit from this kind of strategy. What all of these cards have in common is that they either snowball in value, are potent threats on their own, or are hard removal spells. Being Green-based with enough fixing, it’s easy to splash for all of these cards – Meathook Massacre is BB and Sludge Monster is UU but in those cases I’d want to be more based in Black and Blue to play those cards respectively. In a recent paper draft I 3-0’d I was Sultai-based with multiple fixing cards, and in pack three I happily picked up a Burn the Accursed and Brutal Cathar since my deck was lacking removal. Both cards were solid plays later on in the game so I was able to grab my White or Red sources by turn 5-7 to cast them.

These strategies are not foolproof however. It’s vital to know when you have enough fixing to splash excess colors and pinpoint your deck’s weaknesses before you jump into a game. If your deck is light on two drops and early removal you may fall prey to some of the lackluster, yet aggressive White and Red-based decks. If you fail to draft Bird Admirers, non-Defenestrate removal spells, and Disturb creatures, you’ll fall prey to flying creatures. If you’re missing out on at least three fixing cards I’d be wary of even being a base-Green deck, since Green is so vital to finding your other colors of mana. Finally, without ways to end the game or powerful threats it’s questionable whether you should be in this archetype at all.

While the deck does have weaknesses and has important pieces to its construction it can be both exceptionally powerful and also a blast to play. I enjoy these decks the most because I like pushing the boundaries of what constitutes a draft deck. I don’t want to play within the boundaries of a two-color archetype, not just because breaking the rules sounds fun, but it’s important to challenge the status quo and think outside the box as so many innovators in history have done before us. These decks, when all the pieces are together, can push out some powerful threats while managing the boardstate with good blockers and removal spells. From watching Darkest_Mage and from playing with these cards in paper, I’m confident in splashing and having a versatile deck that will outclass your opponent.

Friends, thank you for reading and look forward to more Limited content coming your way. For more Magic shenanigans (including a new podcast with Mike Flores!) follow me at @roman_fusco. And by all means, please feel free to share some of your sick multicolored draft decks!