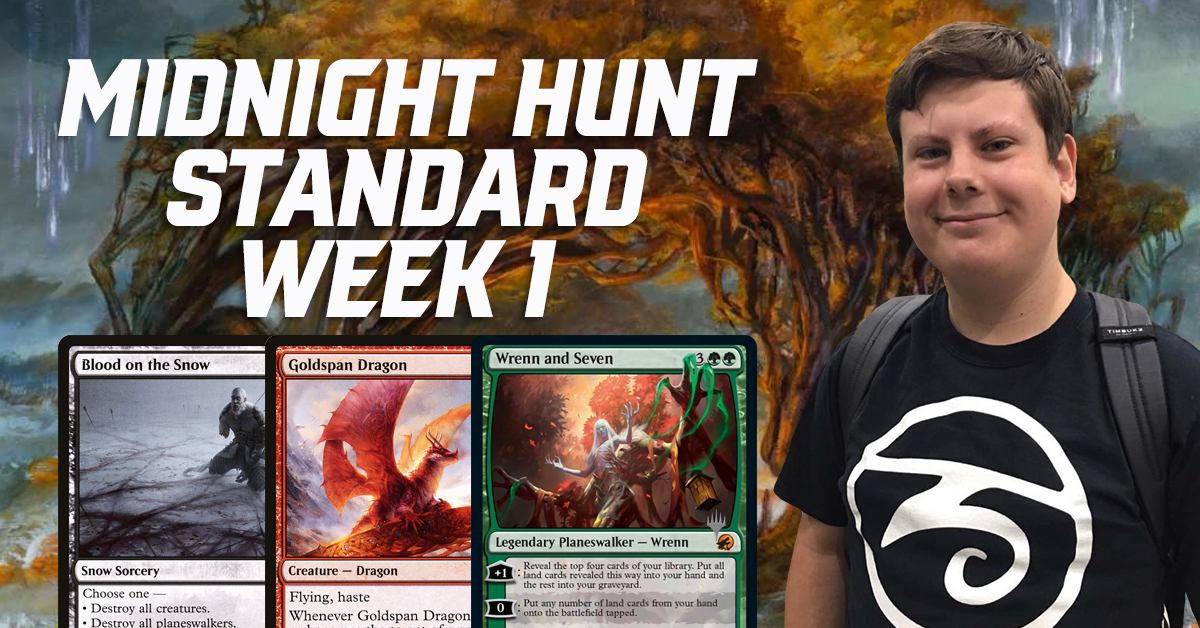 While I spent most of my weekend jamming prereleases at my local game store, players took to online platforms to play the new Innistrad: Midnight Hunt Standard format. While we’re only a few days into the format, we’re finally seeing data on how some of Innistrad: Midnight Hunt’s new cards are impacting Standard. Looking at a few of the online events and postings from popular players on social media, there are a couple of decks that stand out as clear frontrunners of the new format.

A little while ago I wrote about what card clusters felt the most powerful going into this new Standard format, and Gruul Magda was at the top of my list. Gruul is incredibly powerful based on its ability to power out a turn three Goldspan Dragon with the help of a turn one Jaspera Sentinel into a turn two Magda. The deck gets to play a variety of powerful rares, such as Esika’s Chariot and Wrenn and Seven, that generate value the turn they are played, and happily eat a one-for-one removal spell while dodging wraths.

The other versatile aspect of the Gruul decks is their use of the Pathway lands. The Pathway lands, in addition to Jaspera Sentinel and Magda, allow the deck to splash for a variety of sideboard cards in various colors. The deck can lean on Blue Pathways to cast counterspells such as Negate and Disdainful Stroke from the sideboard, or play Black Pathways to play a variety of removal spells and even Tibalt, Cosmic Imposter (as early as turn four!).

This deck utilizes a few new cards, primarily Reckless Stormseeker and Briarbridge Tracker. Stormseeker allows you to power out a hasty Esika’s Chariot on turn four and Tracker gives you card draw in the Clue token it creates, while also retaining its four power due to tokens made from Chariot, Magda, and Goldspan Dragon.

As mentioned above, one versatile aspect about these Gruul Magdas decks is their ability to have access to a swath of sideboard cards. In this case, Snapcaster-Bolt’s deck utilizes countermagic that’s a free splash off the Pathways and treasure tokens. This deck also only plays two copies of the new Gruul “slow land” which is not surprising for a deck that wants to always play its first few land drops untapped.

While there haven’t been many large Standard events just yet, here’s one list that looked impressive from player Christopher Williams that won the Hooglandia Open this past weekend:

A compact midrange deck, this list seeks to put Wrenn and Seven into play and hold down the fort while making a ton of tokens with Scute Swarm. Crash the Festival is a bonus for these midrange decks, allowing you to ramp into it on turn four or five and put a Wrenn and another threat into play. I think these decks are a bit susceptible to wraths, so I like cards like Wrenn and Esika’s Chariot to mitigate those cards.

Depending on how the format shakes out I could see these decks having a sideboard package to deal with the various Gruul and aggressive decks. You could board out some of the less impactful creatures for Vanquish the Horde or Doomskar. I almost want to be more of a midrange bant deck than straight Selesnya. While I think this is a decent week one decklist, I’m inclined to believe you can morph this into a deck that has better game against potential Blue decks in the format and against creature strategies after game one. While this list isn’t perfect, here’s my idea of how I’d build this ramp deck:

2
Teferi, Who Slows the Sunset
3
Wrenn and Seven

Again, this deck is rough and certainly not as refined as Christopher’s deck, but I could see it being correct in metagame weeks where the creature decks are very prevalent. I also like that the Blue versions get reach against various emerging Alrund’s Epiphany strategies with the sideboard countermagic. I think there’s a Teferi deck out there that can make use of mana dorks, in this case Tangled Florahedron and Murasa Rootgrazer, and I really like Crash the Festival into threats like Wrenn and Seven and good enter the battlefield cards like Yasharn.

One other aspect about this build that I really appreciate is utilizing lesson/learn cards. In the Standard 2022 format it was almost always wrong to not play any cards with learn due to you having free access to a seven-card sideboard. In best of three formats you want to utilize your sideboard slots as much as possible, but when your deck gets to play cards like Field Trip maindeck, you get the added bonus of having access to a few of your sideboard cards at all times. Aside from Green ramp decks, I’m of the opinion that you should be utilizing lesson/learn in most decks, especially with cards like Professor of Symbology, Divide by Zero, and Eyetwitch. Which leads me to my next deck…

It would be criminal of me to write this article and not mention a well-performing Mike Flores deck. My Magic sensei and popular Face to Face podcast co-host immediately called me up after hitting Diamond playing this deck. A day later he called me up to proclaim that after hitting mythic this was one of “the best decks he’s ever built.”

There are a variety of these types of decks that have shown up as early as the 2022 Standard format. The core of the deck is based on accruing value through cards such as Shambling Ghast, Deadly Dispute, and Skullport Merchant. These cards allow great early game blockers that can easily be sacrificed for cards and treasures, putting you ahead on both cards and mana against your opponent. Binding of the Old Gods is the quintessential removal spell that not only kills any opposing permanent, but ramps you as well. It’s also worth noting that Binding of the Old Gods does not trigger Goldspan Dragon’s targeted ability.

The deck tops off with Lolth, Spider Queen, and Blood on the Snow. Blood on the Snow is a card I’ve wanted to make work in Standard for awhile, but it was arguably way too slow in the previous Eldraine-infested format. Blood on the Snow is reminiscent of Descend Upon the Sinful, one of my favorite wraths from the last Innistrad Standard era. I absolutely love ways to reset the board while putting pressure on your opponent, and Blood on the Snow does just that. Wrathing your Gruul opponent’s board while immediately putting a Wrenn and Seven into play with a fresh blocker is the perfect way to turn the corner and stop a topdecked Goldspan Dragon. I think Flores’ deck is a serious contender, as it apparently stomps on some of these creature-heavy decks.

I definitely like this list and have a couple of ideas of how to tune a best of three version. One change I’d make is to cut a Lolth or two for Esika’s Chariot. Chariot is a card you can maximize off your Blood on the Snow – after you Blood you get can return either Wrenn or Lolth, immediately crew Chariot, and then attack to get a spider or treefolk token. There are also a variety of cards to choose from in addition to your lessons for a Best of Three sideboard, if only I had a podcast partner to record an episode with…but more info on that later.

Standard is looking wide open and there are a variety of decks to choose from. There are honestly so many decklists to sift through, from MtgMelee events to MTGO Standard leagues. I’m keeping my fingers crossed Dimir or Azorius control can be a serious contender, and I’ve seen a few lists here and there. While the format has obvious frontrunners, most notably Esika’s Chariot and Goldspan Dragon decks, there are a variety of winning decks out there already. And hey, in only a few months we’ll have a brand new format…

As always thanks for reading, you can find me posting about Magic at @roman_fusco