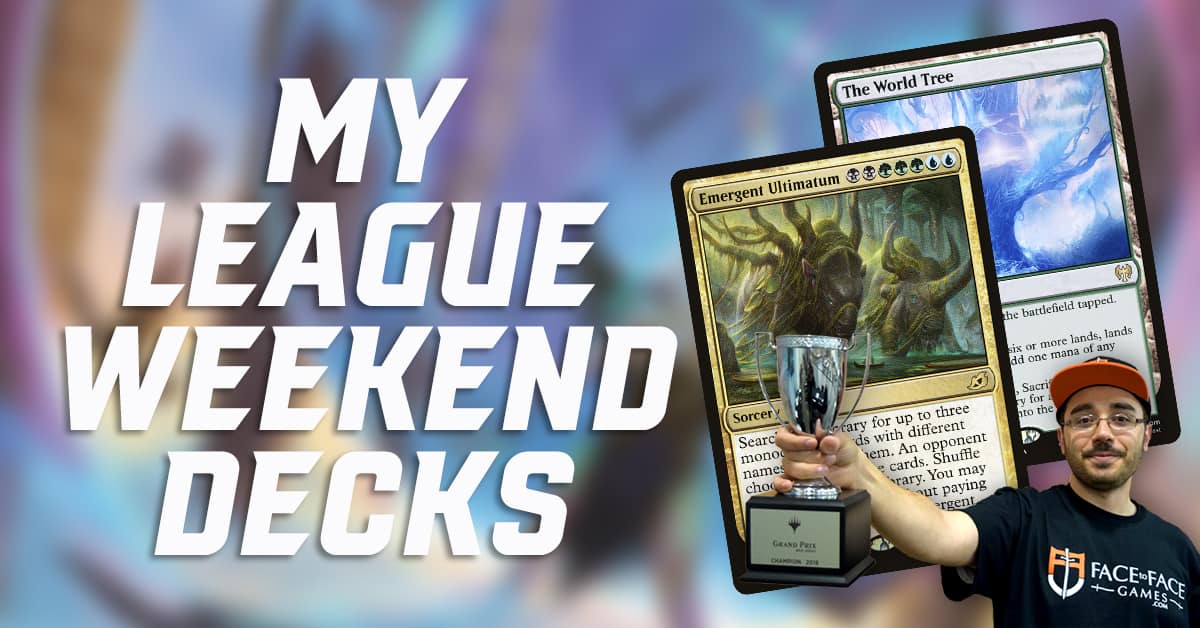 I was very much prepared to be playing Jund Food at this event for the Historic portion. In fact, I was so prepared that was the deck that was registered 45 minutes before the deadline. Then in comes Brent Vos like a boss with Sultai Ultimatum list tuned to beat Auras and Jund Food. Suddenly LSV, Kai, Nassif, and every big name you can think of is instantly switching their choice to it. So of course I had to jump on board.

On the surface it may appear similar to the Standard lists that are very popular but in fact can be a bit more intricate. The ideal 3-card choice is Scholar of the Lost Troves + Omniscience + Final Parting. If they remove Final Parting than you get Omniscience and can play out your hand and also a spell in the graveyard. If they take Omniscience then Final Parting gets to tutor up a win condition as well as put a Ultimatum in the graveyard which the Scholar of the Lost Troves then casts. So now we have netted a Demonic Tutor and a 5/5 flyer.

With the next Ultimatum you can grab a Glasspool Mimic to represent Scholar again, along with Omniscience and a Alrund’s Epiphany. This time the Omniscience is certainly game over since we had a Demonic Tutor previously. The Alrund’s Epiphany + Scholar spells 12 damage plus recasting Final Parting to tutor up another Alrund’s Epiphany which is lights out typically. Lastly if they start with removing Scholar then you get to Omni and tutor up another Ultimatum. As you can see it’s lights out no matter what they decide on.

This deck is more combo ramp than it is control but it has a lot of built-in disruption with Wrath of God types of effects that can make it difficult to play against. The strongest aspect of this deck is the unexpectedness it brings however. As the format adapts to its presence it can be a weak choice for tournaments if it brings our squad success in this event. The sideboard choices were made in anticipation of encountering different control decks and aggressive strategies.

For those interested in what I would be submitting before this last minute switch, I’m tossing that in here as well. Here you go:

Jund Food is pretty stock nowadays but I like to think I have some tech in Necromentia and The Akroan War. The Akroan War being able to find off of Trail of Crumbs can be quite nice against aggressive decks. Necromentia can answer decks like Sultai Ultimatum nicely if the format ends up being more combo centric. Bolas’s Citadel is a nice plan to present against Orzhov Auras post board as they load up on answers and become more controlling. I had plans upon plans for each matchup and what I felt were good contingencies. Then I took all that and threw it in the trash to blindly trust my teammates lol.

For the Standard portion of league weekend I went really deep. I tried everything I could think of to shake up the stale format. I did not succeed and registered Rogues. Here’s how I drew it up though:

Not many notable differences from other lists except maybe the singleton Tymaret in the sideboard can be a miserly card in mid to late stages of games. Epic Downfall is the nice clean answer to pesky creatures that like to come back as well. My hope with this choice is of course to dodge Red decks as much as possible. Ox of Agonas being the bain of this deck’s existence. It’s possible to weather that storm with just the right draws, but I wouldn’t be too hopeful on that happening consistently. Hopefully you’re reading this after the fact and the team made smart decisions. If not at least we can look back with 20/20 vision and validate our self-worth.

I know for many; League Weekends are not that exciting. For those of us in the league they can be quite stressful and intensive. Basically, like an income that’s on the line. Luckily for myself I have other careers, but for many they are the foundation of their income. If you want to support professional magic, be sure and tune in. Tweet about it. Because, one day you never know how it might be you on the professional stage and the groundwork for supporting your career could be in place thanks to your participation. Sorry to get a bit dramatic. Thanks for reading as always and see you next time!