My Thoughts on Legacy Elves 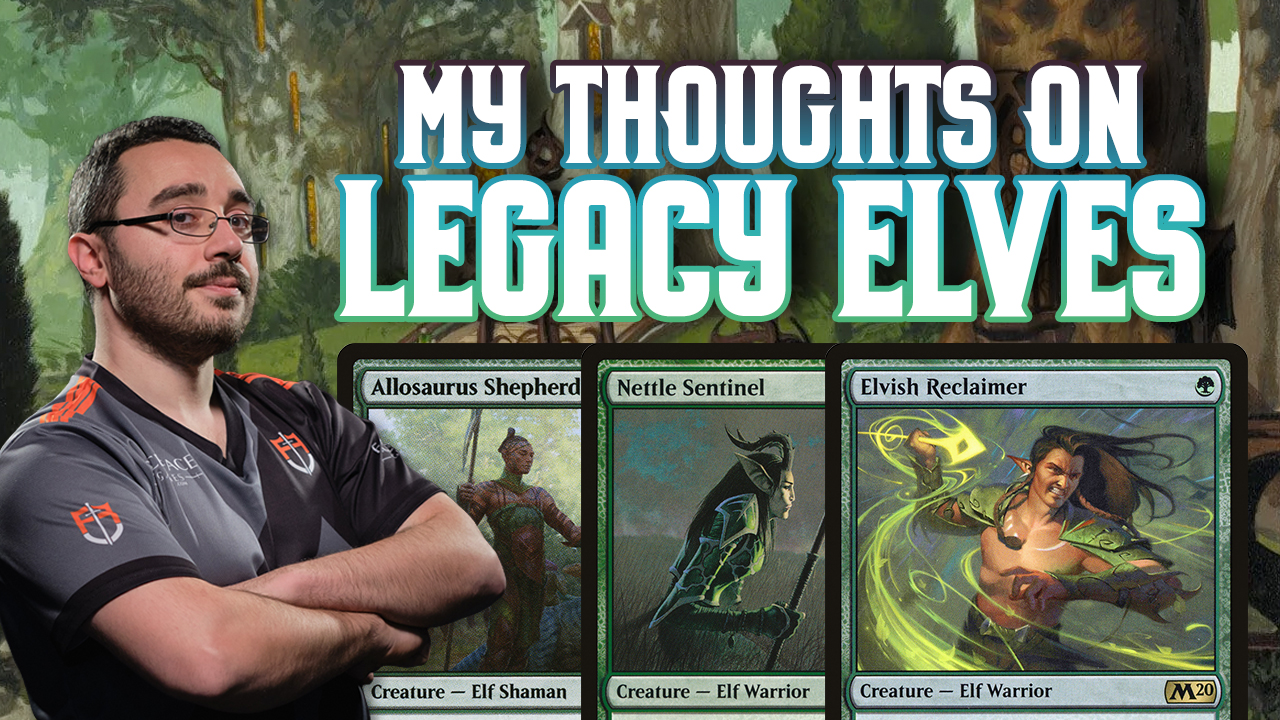 …in case you’ve always been wondering about which little green people you wanted in your deck. I decided to write an article just to help you decide! There’s a running mood on Magic Twitter these days and it’s one where a really good player will make a big proclamation, like: “Stop putting Nettle Sentinel in your decks, it’s 2022!” Super witty I agree – but is it right?

To establish this comparison we have to look at the different structures of the Elves list that are built around their functional differences. Elves lists that include Nettle Sentinel play more functional utility cards and look something like this:


This deck is definitely faster due to the mana synergies making for more explosive turns. The big takeaway for me here is that you won’t have a bunch of clunky singleton Elvish Reclaimer tutor targets making for bad draw steps. You’ll see what I mean when you look over the typical Elvish Reclaimer list, like this one:


I know it might not happen super often, but having one copy of Craterhoof Behemoth and drawing it sucks! Not being able to Natural Order for it to kill very early in the game is rough. I know we can grab Progenitus, but there’s so much combo in Legacy that we need to race, and Progenitus is usually not the right target.

I’m totally biased here so let’s go over some of the pros of Elvish Reclaimer builds and maybe I’ll wind up convincing myself of what others are seeing. Having access to main deck interaction seems nice. I know I am going over the pros here, but I want to mention that most decks are resilient enough to go through a little bit of interaction and that’s why I am not a huge fan of it.

Elvish Reclaimer appeals to me because it can grow to have size-able stats as a 3/4, which gets it out of Lightning Bolt range. This can give Elves a fighting chance of attacking for the win, whereas combo Elves really needs a key combo piece to finish off the opponent. The secret value in Elvish Reclaimer is it also prompts the opponent to play their turn differently. In skill-intensive games, the opponent must realize what cards Elvish Reclaimer could find and play around them in order to not “get got.” This adds additional value to Elvish Reclaimer in that the card puts pressure on the opponent without taking up any utility.

The reasons above are why you might start to see people using Wasteland on their turn, rather than waiting to see if we have a Gaea’s Cradle or not. The reason I thought people were playing Elvish Reclaimer initially was so that you could make sure we always had a Gaea’s Cradle. Not that I think I was totally wrong, but Gaea’s Cradle is the reason Elves is as good as it is. Fast mana has always been the thing to break formats and it is no exception here.

I find it interesting that Elvish Reclaimer Elves leans harder into interaction, playing cards like Shriekmaw and Thoughtseize in the sideboard. Having Karakas to bounce a Dark Depth’s token or a Griselbrand seems cute, but I worry about consistency. If Elvish Reclaimer didn’t put lands into play tapped I think I would be a lot higher on the card. Back in the day, Elves actually used to run a Crop Rotation package that I am not even sure if it was right to ever move away from. Now that we have Allosaurus Shepherd to make our spells uncounterable the risk of Crop Rotation’s additional cost has been removed.

I know I didn’t give Elvish Reclaimer its full fair shake, but if you look at the matchups Elves is weakest to you’ll find they are turn one and turn two combo decks. Reclaimer does not improve those matchups as much as the speed as Nettle Sentinel does. Having turn one Nettle Sentinel, turn two Glimpse of Nature + Birchlore Rangers allows you to play out your hand and draw lots of cards. If you happen to have an additional Nettle sentinel or a Heritage Druid after that you can start to combo to the point it can be lethal. It’s pretty insane that Elves can win on turn two, but it can and it’s not even that difficult. I would wager it is about 10-15% of games where it is possible. Being able to race Storm decks is honestly pretty thrilling!

The biggest reason I think people are playing Elvish Reclaimer over Nettle Sentinel is Delver. I’ll admit we would prefer Elvish Reclaimer in that matchup. Delver makes up the majority of the field and Elvish Reclaimer is hard to kill, attacks for a bunch, and gets to use Bojuka Bog to shrink Dragon’s Rage Channeler’s and dodge Murktide Regents. It makes perfect sense to me, but it is also a confluence of events that does not add a huge amount of percentage points.

Both one-drops dodge their sweepers in the sideboard (like End the Festivities). The likelihood that we have an active Elvish Reclaimer as a 3/4 that hadn’t already been dealt with. That we have other decent sized Elves in play. That we haven’t drawn the Bojuka Bog. That our opponent is forced to attack with Dragon’s Rage Channeler and does not already have a Murktide Regent to remove Delirium. Yes some newer players will not see it coming, but anyone thats played the format enough will know what to expect next.

Not having Elvish Reclaimer allows for a more streamlined deck as well. We get to utilize our sideboard in additional ways instead of making room for random singleton lands. We get to play Leyline of the Void which is backbreaking for many decks in the format. With my build of Nettle Sentinel Elves I try to gear the sideboard to be better against Delver since we lose some points there, mainly by playing four copies of Carpet of Flowers. An on-color Sol Ring is pretty busted and Delver loses the line of killing our mana when we have access to it.

Both lists are still weak to cards like Plague Engineer. I think Submerge strategies are better against Elvish Reclaimer lists. If people start switching to Rough/Tumble in over End the Festivities, then we might have addition cause to consider that Elvish Reclaimer might be better than Nettle Sentinel. For now, that does not seem to be the case or at least they are only playing one copy, which isn’t sufficient to make it a probable causality worth playing around.

Elves is a very good deck as long as it does not have a target on its back. As soon as it does – abandon ship, because boy oh boy is the hate rough. Grafdigger’s Cages, Plague Engineers, and even Blood Moon can be a difficult hate piece to get around. Let’s not forget Narsets and other additional draw denial cards in the format. Elvish Visionary looks pretty embarrassing in the face of these kinds of cards. It’s critical to know when to pull out the deck and when to shelve it again.

In writing this article I have reminded myself of reasons I personally prefer Nettle Sentinel builds. First and foremost, any time someone goes against the grain of public opinion and calls the Nettle Sentinel version unplayable. It can be tough to go in a direction that disagrees with the majority opinion. The imposter syndrome thoughts bleed in and it feels like being gaslit into accepting a reality I didn’t get a say in. I have made a career of being different though and I don’t see why I should start changing that now.

Don’t get me wrong, I hope I am wrong. Everything I can reason for myself tells me the flipside of what I am reading online. I know many players who have not played enough of the format or deck will see it differently, because it looks like going more interactive post board is the way to be. As soon as you play this deck enough to know that you do not want to fizzle on your Glimpse of Nature turns orr that you can often fight through random things that don’t kill you by just being faster than them is when I think you’ll start to see my side of things. I am open to being wrong, I want someone to show me the reasons why.

Now, onto the main topic of discussion. Everything you just read was written before the Star City Games Baltimore team event, where I in fact was in the Legacy seat playing Nettle Elves. Now I am writing to you after having had a magnificent 14-0 run with Elves. All my plans came to fruition exactly as I imagined. I also had the good fortune to dodge the unwinnable matchups.

I opted to remove the Leyline of the Voids from the sideboard in favor of a couple copies of Thoughtseize and Dismember. They over-performed for me all weekend and I was very happy with my decision. I played Reanimator, Doomsday, and Turbo Depths zero times. So that is certainly lucky.

Unfortunately despite my performance in the team event my teammates were not as lucky as I, and we sadly did not make day two. I did join the Legacy 5k on Sunday however, where I ended up splitting the finals!

When I think about different ways to approach the deck. I can consider that Glimpse of Nature may no longer be the right approach, crazy as that sounds. For now though, I am sticking with good ole reliable Nettle Sentinel.

As always, thanks for reading. Catch you next time!