My Thoughts on Modern Golgari Yawgmoth 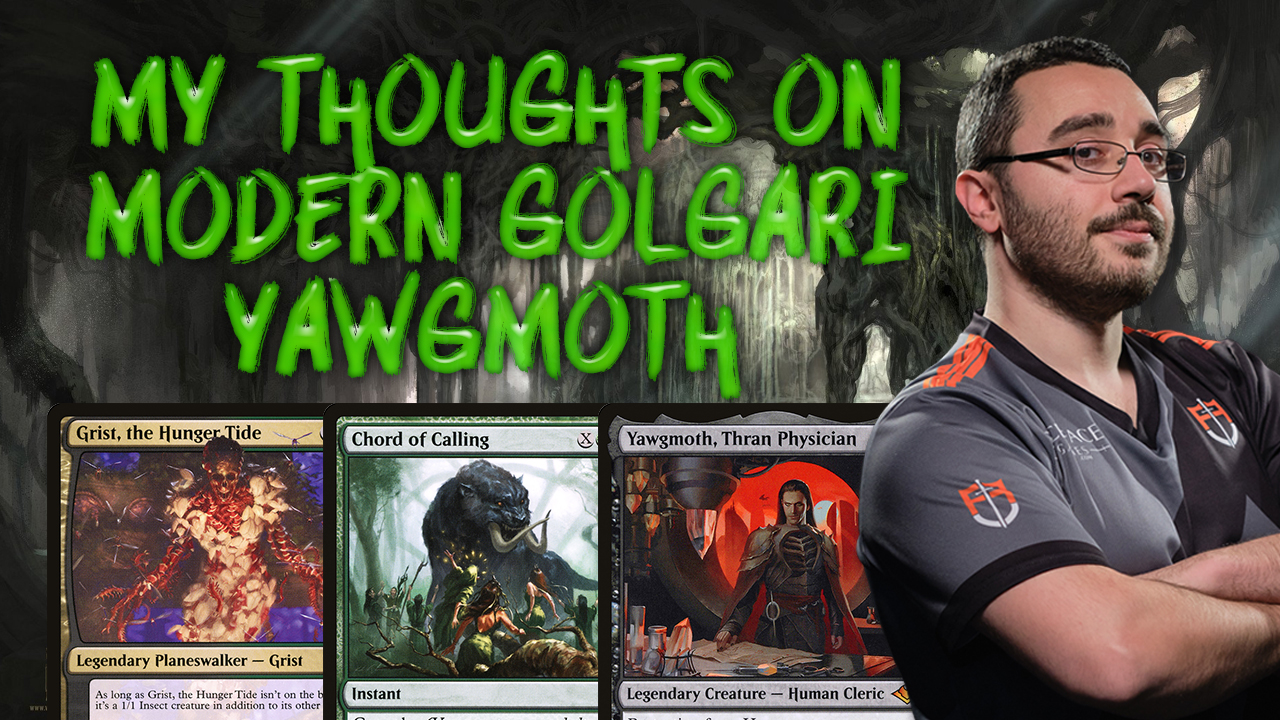 When I refer to the term “solved” in the context of Magic: the Gathering, it means a certain deck has reached its zenith or highest level of performance. Do not mistake this with the notion that I mean this deck is the best deck in the format.

Today I am going to talk to you a little bit about some of the props and slops of choosing Yawgmoth as your weapon of choice in Modern. I’ll dive into the common builds of the deck, current matchups, and my personal take on what I’d play.

First off, in case you are a new reader and don’t automatically know what deck I am referring to. Here’s a somewhat stock list:

The premier combo of this deck involves playing Yawgmoth, Thran Physician in addition to two creatures with Undying. Essentially, you can sacrifice one of these Undying creatures to draw a card and shrink an opponents creature. It will come back with the +1/+1 counter. You can then sacrifice the other creature with Undying to draw and shrink the original Undying creature. Since a -1/-1 counter and a +1/+1 counter negate each other, it is as if the original undying creature is a fresh newly summoned creature. You can then draw until you reach a Blood Artist to “go infinite” and drain your opponent for lethal.

Let’s go over the props. This deck can grind out the opponent in addition to its main combo. The grind is so instrumental for Modern because so often both decks do their thing and simply cancel each other out. This deck has the value in cards that are hard to answer to win a long drawn out game. This deck has a term Magic payers refer to as a “toolbox”. For new players out there, a toolbox is when you have a plethora of single copy targets in your deck with the ability to search them out. In this instance, you can tutor for those cards with Chord of Calling and Eldritch Evolution. You can search for random hate cards, such as Magus of the Moon, to stop a particular opponent’s strategy.

Now for the slops of this deck, and boy do I have many. This deck is for sure a Grist, the Hunger Tide deck. However, if you mill away your Blood Artist and/or your Geralf’s Messenger you can significantly limit how many win conditions your deck has access to. This seldom feels good and really can only hit an insect to double mill if it hits a second copy of Grist.

Pithing Needle and Wrenn and Six are two popular cards that just obliterate this deck. Wrenn can kill 18 cards in our deck with it’s -1 ability. I know many seasoned pilots can fight through a Wrenn but when you stack it with the rest of our opponents’ plays, it often spells disaster. Pithing Needle stopping Yawgmoth from being able to activate is also a big hindrance to our strategy.

Thanks to new sets being released this deck keeps getting new toys, one in particular being Boseiju, Who Endures. This is a nice clean answer to Pithing Needle without having to take away from dedicated slots in the deck. However, needing to use a Grist to kill off a Wrenn and Six feels like a huge waste of value. We often do not recover fast enough from this and fall too far behind.

Your life total is even a slop when it comes to this deck if you take too many hits before you are ready to combo win. You may not have the life total to dig deep enough to find your win conditions. Or as is sometimes the case, you create the very opening your opponents may have been waiting for by taking so much damage.

This next slop is funny, but most decks run Necromentia in the 75. This card is just poor value at an excessive cost. It is a similar argument to why Surgical Extraction does not see much play. I am not trying to imply the deck should not run it. However, this deck has always been weak to cascade mechanics. Necromentia can turn the tide by removing the card they find to some great effect just that by the very nature of having to play this card. To resolve a three mana spell and then to be no further ahead in progressing your board state can be a bit underwhelming is all.

Let’s transition into the Modern Metagame and talk about what this deck’s positive and negative matchups might be. First up is Izzet Murktide making up about 13.2% of the current metagame. I have heard some proponents of both Murktide and Yawgmoth say the matchup is favorable for them, but if you ask me this matchup is favorable for the Izzet player, assuming they’re a competent pilot. Countermagic, access to Unholy Heat, and cheap threats are what make this matchup unfavorable. There will of course be grindier games where Yawgmoth gets to pull out wins, but even long games seem to favor Murktide as it has better card advantage engines.

Four or Five Color Omnath is easily the #2 deck in the format, making up around 9.4% of the metagame. Again, I believe Yawgmoth is the underdog in this matchup. This really demonstrates a large slop of playing this deck in my mind, since both Omnath and Izzet are unfavorable matchups that make up about 22% of the metagame. Their removal is all exile based! Solitude can interrupt our combo really nicely. They amass a ton of on-board value that is very hard to recover from. This would be a strong enough argument alone to push me off this deck. To be fair though, I will go into the other matchups where Yawgmoth starts to get a little better sounding.

Next up is Hammer Time, a clean 8% of the Modern Metagame. This Mono-White deck with the occasional splash has been a big contender in Modern for quite some time. It goes off fast and punches hard. Fortunately, Yawgmoth tends to be the favorite here. Yawgmoth itself provides an excellent answer to their threats and cards like Crime//Punishment out of the sideboard or Force of Vigor are brutal in this matchup.

Following Hammer Time is Burn, an extremely fast Boros deck that aims to kill the opponent before they can enact their plan. This is unfortunately 7.9% of the metagame and another bad matchup for Yawgmoth. Yawgmoth needs to pay a lot of life to do its thing. Burn capitalizes on that with a lot of direct damage to the face. So here we see the odds stacking further against Yawgmoth.

Living End is now 6% of the metagame. Some believe it has a higher prevalence online due to it being a deck that is speedier to play. Thanks to Endurance, this matchup is not nearly as bad as it used to be. I believe it to be favored towards Yawgmoth, but I wouldn’t give it long odds certainly.

Amulet Titan has dropped to now being only 5% of the metagame. For awhile the deck was so popular cards had to be banned from it. It is still a powerful deck and a force to be reckoned with, but even though it may seem like it would be bad on paper I have found this deck to be in the favorable column for Yawgmoth. So that’s another one in the plus column, but now we are getting to the decks that make up only a small portion of the meta.

Indomitable Creativity is tied at 5% of the metagame. Unfortunately, we see here again a bad matchup for Yawgmoth. Assuming they don’t fumble on their draw, we tend to die to a big payoff turn that is hard to recover from.

Now the really small percentage decks. Rakdos Midrange at 3.7% is finally a matchup that is slightly favorable. Because of our creatures’ undying mechanics and the card advantage. Even our Grists give us a lot of resilience to this matchup.

Normally I think I am well known for having some “out there” builds. Sadly not the case for you here. My list is pretty close to stock, here’s what I’ve been working with:

I’ve only opted to include the Magus of the Moon sideboard option, because some of those rough matchups can be stolen with this strategy on occasion. However I am seldom excited about it. I also wanted a second Veil of Summer because the card is so busted in some matchups and this deck loves a blowout.

I know this deck is sometimes the “Champion of the People.” I apologize if anyone was offended by any of my assessments. I would however, not put this deck in the Tier 1 category because of the state of the current meta. If you dodge the bad matchups enough of the time, make well-informed deckbuilding decisions, and play your heart out, you can still take down any event.

I think your assessment with some of the matchups are a bit off…I have tracked statistics with the deck since starting to play it (close to 1200 matches), and personally, my win % in most of the abovementioned “bad matchups” are 50% or higher.

Much as is the case with Murk, Yawg rewards experience and practice, a lot of the matchups are contingent on how strong a pilot one is.

Just my 2 cents. Appreciate the article!