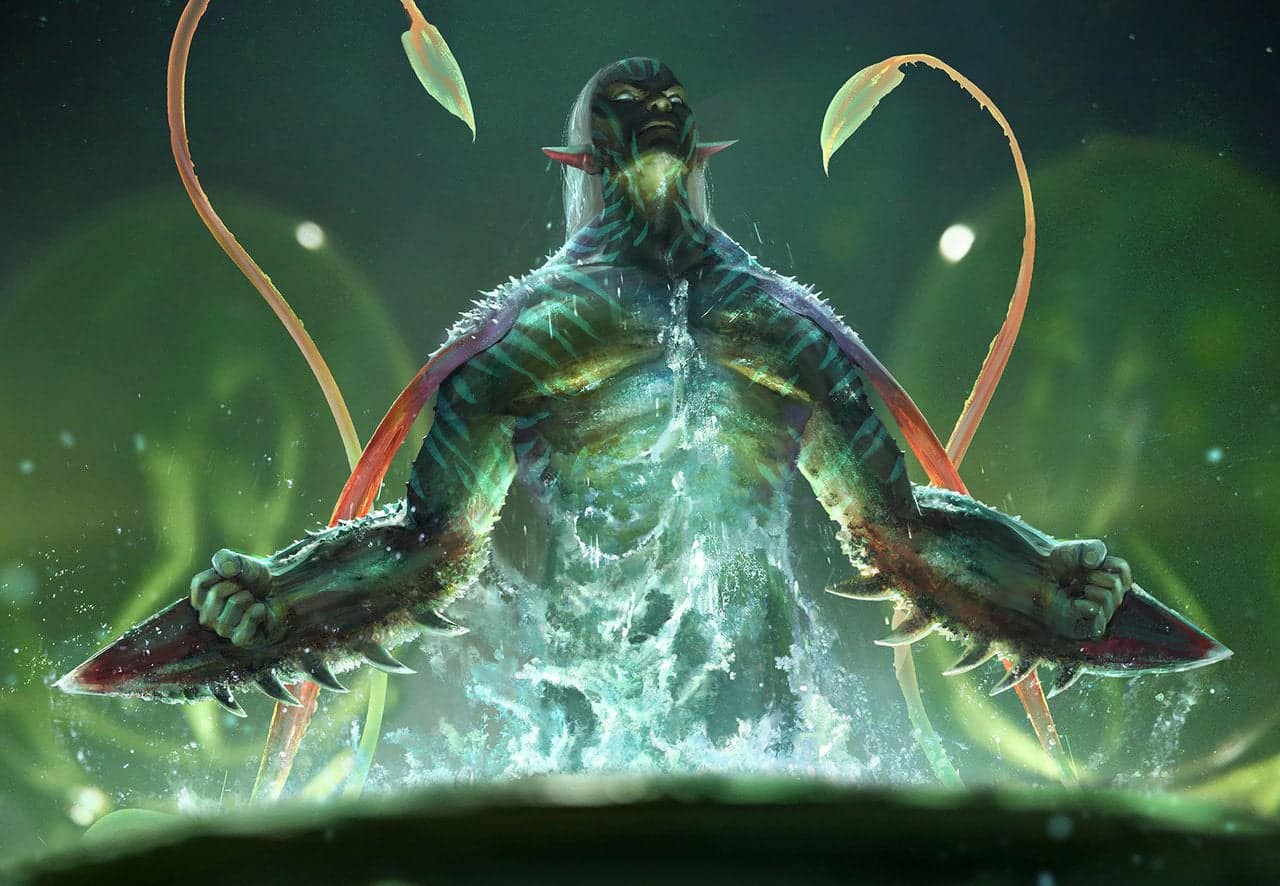 So is this a meme or is it actually good?

Should I buy out Allosaurus Rider or will it be banned on the next B&R announcement?

I’ve gotten many derivatives of these questions since the release of the Neoform/Griselbrand combo deck.  I’m excited to finally pencil this article which hopefully will answer a lot of your questions about the Neoshoal deck (TLDR: in certain metagames? absolutely/~10%/no and not yet).

Ever since my first pet deck Grishoalbrand has been forced into hiding for a variety of reasons (Phoenix/Dredge proliferating forcing our good matchups to start packing maindeck graveyard hate, printing of Dovin’s Veto/Force of Negation/Narset, Parter of Veils/Teferi, Time Raveler etc.), I’ve been wandering around lost, but seeking for a new home.  Dredge briefly had my attention but turn 3 kills are far too slow for my taste.  Thankfully, I discovered this new iteration of the degenerate Griselbrand combo deck and put in enough reps to have what I think is an informed opinion.

Neoshoal is an A+B combo deck that looks to evolve (Neoform/Eldritch Evolution) an Allosaruus Rider (8 effective copies with Summoner’s Pact) into a Griselbrand as early as turn 1.  From that point, it looks to chain life gain spells (such as Nourishing Shoal) to draw the entire deck with Griselbrand, much like its distant cousin Grishoalbrand.  With the entire deck in hand and 4 Simian Spirit Guides (“SSGs”), the world is your oyster and you can win with whichever card you choose to be your win condition.  Currently, Laboratory Maniac is accepted as the best win condition.

Fundamentally, you are trying to keep hands that are able to cheat in a Griselbrand by turn 2.

There are two main reasons to play this deck:

Keep in mind that this should be taken with a grain of salt due to the sample size (~200 matches).  Having said that, I think this serves as a good guideline on how fast this deck can be (Keep in mind these are all from real MTGO/paper games and much of it is with the Vancouver Mulligan, so the actual, goldfish turns will certainly be higher).

Now I’m not sure about you, but if you are going to tell me that in Modern there’s a deck that can kill by turn 2 22% of the times (conservatively), I’d say that’s beyond acceptable for a Modern deck.  Recall that WOTC has stated that they are comfortable with Modern being a turn 4 format, and my testing with the deck smashes that boundary.  To reiterate, most of these numbers are with the Vancouver Mulligan rule.

I believe that this deck is unacceptable in the context of Modern and should be banned, if only for quality of gameplay reasons.  That being said, I’m not in charge of B&R so I’m more than happy to keep testing it and write about it!

At the highest level, the deck can be broken down into the following: combo, mana, win condition, and miscellaneous.  I’ll refer to the following list:

Neoform is our preferred enabler by far because of the 2 cmc vs. 3 (the gap between 2 and 3 can feel like an eternity in a 14 land deck) and because of the +1/+1 counter it will give

Griselbrand, which does come in handy sometimes.  However, Neoform is susceptible to Spell Snare (but you aren’t playing around a 1-of anyway) and cannot be combined with Chancellor of the Tangle+basic Forest for a turn 1 kill (which is why Matsugan, noted Allosaurus Rider enthusiast, has a basic Island over a Forest).

An issue which comes with Eldritch Evolution sometimes is that you are stuck with an Island, another green land and SSG (which does happen sometimes with Field of Ruin/Path).  However, there’s also some corner cases only with Eldritch Evolution, which is that you can Evolution into a Laboratory Maniac if you otherwise cannot access the Lab Man, whereas you cannot do so with Neoform. Personally, I’m in the camp of the Forest being useful coming up way too frequently, so I am on the basic Forest.

4 Allosaurus Rider, 4 Summoner’s Pact – The butter to the above’s bread. Evolving an Allosaurus Rider into a Griselbrand is the entire premise of this deck.  Keep in mind that occasionally, you’ll be casting Allosaurus Riders to beat down.  This is most common when you have your Griselbrand removed or Nourishing Shoals Surgically Extracted, but there are other corner cases for casting Allosaurus riders, including sheltering yourself from Liliana’s Edict or circumventing a turn 2 Meddling Mage (where if you don’t play Rider on turn 2 opponent will certainly name Allosaurus Rider, but if you cast it at least they need to guess between the two evolution spells. Keep in mind this is still vulnerable to Reflector Mage and discretion is needed).

Two additional notes to Pact usage: 1) There are many times during the combo where you Have Griselbrand where you want to liberally fire off your Summoner’s Pacts because the library size is comfortably above X/7.  In this case, Pacting thins your library for better hits on your future Griselbrand draws.  You can also guarantee a gain 15 with Nourishing Shoal if you Pact for Wurm, and 2) there are times where you absolutely must combo and win this turn.  In this case, you may want to Pact on your upkeep to thin the library so you have a better chance of hitting your key spells (commonly an evolution spell or a Nourishing Shoal)

Land Base: 4 Gemstone Mines, 4 Botanical Sanctum, 1 Forest, 1 Tranquil Thicket, 4 Waterlogged Grove – It’s a delicate dance between having too many and not enough mana sources.  Lists have gone from 13 lands, 14 lands to 13+one pseudo-land.  Anecdotally, I’ve found myself wanting to draw a land more often than not, which led me to this configuration.

The first two 4-ofs should be self-explanatory as the first eight painless G/U sources. Without the Safewright Quest package, Waterlogged Groves fill out the rest of the land base. The basis for the Forest over the Island can be found above.  Tranquil Thicket is an experimental card that I’m testing as the “13.5th” card.  Now some (including myself at first) may be outraged about a tap land in a deck where timeliness is key, but you should think of it as a 13 land deck with a high floor as a cycler that could come down on turn 1 to enable turn 2 kills.  I wouldn’t be surprised if this isn’t optimal though.

Some lists do play 13 lands with Safewright Quest and Breeding Pools, but I have found that to be too clunky and Safewright to be too low impact.

The Manamorphoses are great here as they are in any decks they are included in.  They pitch to Allosaurus Rider, fixes mana (including being your only outs under Blood Moon) and replaces themselves if you have a surplus of its effects.  It’s a common play to cycle it on turn 2 for G/U with a Rider/Pact in hand to try and hit the Neoform or set up a Serum Visions.

The 4 Chancellors seem gimmicky, but they too serve a few different purposes and I’ve been impressed by their inclusions.  It goes without saying that they enable the broken turn 1 kills that we all love. Turn 1 Chancellors also allow you to cycle through Manamorphoses or store a mana with Wild Cantor.  Lastly, they serve to ensure you have a critical mass of green cards as well as be respectable food for Nourishing Shoal.

Lifegain: 4 Nourishing Shoal, 2 Autochthon Wurm, 4 Allosaurus Rider, 4 Chancellor of the Tangle, 1 Life Goes On – These allow you to keep going during your Griselbrand turn as well as give you buffer against aggressive strategies like Burn.  Keep in mind that Summoner’s Pact can fetch these, and Pacting for Wurm is a very common play pattern.

Life Goes On merits further discussion, as people have played other cards such as Samut’s Sprint and Reckless Charge in this slot.  Again, I have to stress how important maintaining a density of green cards is for Allosaurus Rider.  The other two spells being red and therefore castable with just a SSG isn’t as much of a benefit as it seems, as you generally have two SSGs+Manamorphose often during your combo turn.  If not, that is what Wild Cantor is for if you have 1 SSG (can be searched with Pact).  Keep in mind that rarely, it is correct to fire off the Life Goes On before your combo turn if your mana is going to be constrained.

Conceptually, you are a critical mass combo deck that requires you to maintain a certain density of green cards to function.  Additionally, because you are the best and fastest deck at what you do, I prefer to include strictly answers to your opponents’ answers and not include any additional threats or hate cards for others (additional 7 drops to evolve into have been looked into but nothing comes close to Griselbrand in Modern).  Therefore, you’ll note the bias for sideboard cards to be 1) green if possible, and 2) the most efficient answers for the hate cards so you can sideboard in minimally.  One of the biggest advantages of playing this deck is how many of the common axes of hate misses you (all graveyard hate except Grafdigger’s Cage, creature removal, Chalice to an extent), so it’s easy to have a focused sideboard.

Hate cards that you want to answer generally come in these forms:

As an all-in combo deck that values every point of mana as well as how fast you can combo, Pact of Negation is a slam dunk inclusion, as has been the case traditionally in similar decks (Grishoalbrand, Ad Nauseam).  The UWx matchup isn’t particularly great because of the myriad of tools they now have (imagine the matchup with UW where it doesn’t have Narset, Teferi, Veto or Force!) but between the Forces and the Veils,  you do have a fighting chance.

My philosophy is to take your lumps and scoop to these off-axis hate that you do not have any clean answers for.  I have played some Spell Pierces in the sideboard occasionally as this is an unknown tech and it can punish the UWx players who think slamming a turn 3 Narset is an auto-win.  Also great in random matchups like traditionally Dredge and the mirror.  Teferi can be combated with a proactive Veil, but it’s otherwise a very tough card to beat if your Pact of Negations are offline.

Hopefully this has shed light on the details behind the memey turn 1 kill screenshots (my opponent never got to take a game action before they died!, etc.) as well as how the deck operates and the cards interact.  In the next article, I will go deeper into the gameplay, starting hand evaluation, sideboarding concepts, and of course a sideboard guide.  Until then, keep on turn 1ing!