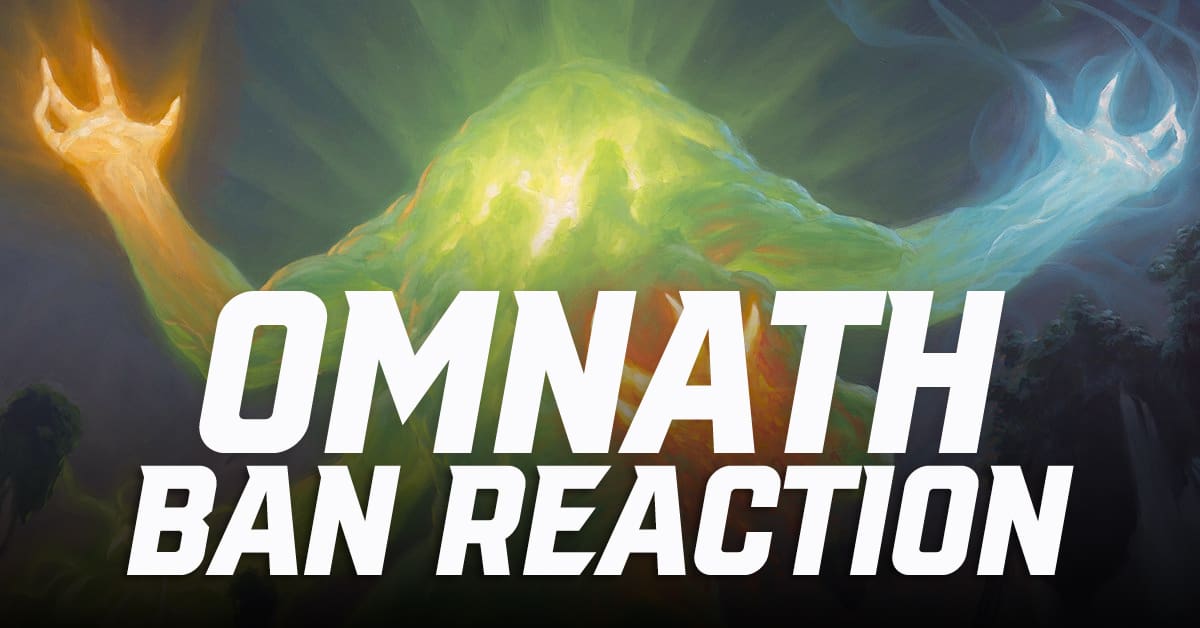 …and what a ban announcement it was. Honestly, for the first time in a while I’m optimistic about Standard. Back during spoiler season I pointed to Uro and Lucky Clover being toxic to the format, and I’m ecstatic that finally both are gone, along with Omnath. We can talk all day about WOTC’s approach to designing cards and the numerous amounts of bans that have taken place (and might continue to take place in other formats), but let’s focus on some new Standard decks instead. The one thing I want to give credit to WOTC for is that they’ve banned four cards in about a month’s time. It’s crazy to think about how many cards are banned in Standard at the moment, but at least the bans have been quick and without remorse. Wizards was committed to ban Omnath and Lucky Clover if the Uro ban wasn’t enough to make a dent. Now I’m more confident in a Standard where a vast variety of decks are viable. There are still cards in the format that are incredibly powerful, but I don’t think there remains a card as dominating as Uro, Clover, or Omnath.

It’s no surprise that Omnath and Clover needed to go. This past weekend’s event, The Grand Finals featured a Standard metagame where 78% of decks included Omnath or Lucky Clover. The remaining decks were four Rakdos Midrange, three Gruul Adventures, and one U/B Rogues. Interestingly enough, two of the Gruul Adventures players, Emma Handy and Autumn Burchett both made Top 8, along with Seth Manfield on U/B Rogues making it in as well. All three players were incredibly prepared and played exceptionally well in the face of the Omnath menace to lock in their Top 8 finishes. First, let’s take a look at these decks and talk about how they might adapt to Omnath and Clover’s banning.

Gruul Adventures has always been a strong player in the Standard field even since before Zendikar Rising was released. The deck packs powerful creatures and a mini-engine in the form of Edgewall Innkeeper. I think it’ll be interesting to see how this deck matches up against Winota decks in the new format. I actually don’t think many cards in this list need to change to adapt to the new meta. If anything Embereth Shieldbreaker can probably go, with the only big artifact to target being Embercleave. I love Chainweb Aracnir for the U/B Rogues matchup and Thundering Rebuke for Winota. Vivien and Great Henge also are great threats to bring in against any potential control decks that pop up.

One thing that really impressed me while I watched Seth play this weekend was the utility of Lurrus as the deck’s companion. I remember watching a deck vs Omnath Adventures where the opponent had brought in Chainweb Aracnir as a hefty blocker, but Seth was able to continuously cast Thieves’ Guild Enforcers from his graveyard to “out-card” his opponent, even in the face of their sideboard “silver bullet” card. This deck definitely feels less like an aggro or mill Rogues deck and more like a control deck, with all of the removal, maindeck Mystical Disputes, and four copies of Into the Story. Depending on how the format settles I could see the counterspells making their way into the sideboard for more maindeck removal. I definitely think this deck will have a hard time keeping up with a resolved Winota trigger or a resolved Great Henge, however.

U/B Rogues still seems incredibly powerful and consistent, but there’s one deck I have in mind if Rogues remains a major-player in the new format.

R/W Cycling has always been a pet deck of mine since its Ikoria release. I love playing Burn in Modern, it’s a deck that rewards patience and correct sequencing. R/W Cycling feels similar in a way, the sequencing being incredibly important based on how you utilize your cycling creatures and when to cast your Zenith Flares. In the face of Soaring Thought-Thiefs and Ruin Crabs, I can definitely see R/W as a major Standard player in the weeks to come.

This list is pretty stock, you usually don’t want to sideboard much to protect the integrity of your Zenith Flares, but Shredded Sails is a nice card vs Rogues and Embercleaves. Redcap Melee is another nice option vs Winota and potential Mono Red decks. I’m not sure how good Roiling Vortex might be, it’s an option vs potential control strategies. I could also see it being good against U/B mill decks that aren’t beating down as hard as U/B Rogues. There might be a better option out there, but I do want an alternate win condition if my opponent decides to sideboard four copies of Negate for my Zenith Flares. Valiant Rescuer and Drannith Stinger might be good enough on their own though.

Next up, some other decks that were mildly popular during Omnath’s reign that could see a resurgence:

This is a list that English streamer Crokeyz was playing a week or so ago. Kroxa is the big selling point for this deck, the only remaining titan in Standard. This is pretty standard control deck shenanigans, we have some early spot removal, counterspells, and some finishers in Shark Typhoon and Ashiok. Kroxa plays a really nice role in this deck of acting as both an early discard spell, which will be fantastic vs non-aggressive decks and as a late game threat. I probably don’t need to sell the power level of titans to you though. I think cards like Spikefield Hazard and the counterspells are less valuable now if the format shifts to more aggressive strategies. There are only six removal spells maindeck that interact with a Winota, three being Hagra Mauling (which you might need to play as a land in some scenarios) so I’d be interested in more Heartless Acts or maybe some Murderous Riders.

As for the sideboard I still really like Shredded Sails. Even though part of the reason to be playing this card revolved around destroying Lucky Clovers, Soaring Thought Thief and Embercleave will still be around. And who knows, maybe you’ll end up destroying a Glass Casket that stole your Kroxa!

One card that I think hasn’t it’s time to shine that was in the last decklist is Mazemind Tome. Tome reminds me in part of Treasure Map, and while it won’t flip into some Lotus Petals, Tome at least lets you gain some advantage for no extra mana in scrying and an eventual four life. With Yorion, however, you can set up turns where you can activate it and reset it with Yorion. I also really love Tome in combination with Jace, allowing you to safely use Jace’s 0 activation to draw an extra land or cheap spell. There are also other fringe benefits such as drawing a card in combat to pump a Dream Trawler, or getting an extra scry before you cycle or cast an Omen of the Sea.

I think U/W control has both strengths and weaknesses coming into this new format. I really like having access to Shatter the Sky if we see a resurgence in aggro decks. Most aggro decks in this format revolve around playing usually one creature a turn, so you can get a 1-2 punch by casting a shatter on turn four and following it up with an Elspeth Conquers Death to remove a Winota, Questing Beast, or Torbran. Lastly, with 80 cards in your deck you won’t get milled out (hopefully) by Ruin Crab or Teferi’s Tutelage.

The one thing I don’t particularly like about UW is that the spot removal is pretty poor. The only real way to remove a Winota to prevent the triggers from happening is to either counter it or Petty Theft it back to your opponent’s hand. Additionally, if U/B, Grixis, and U/B Rogues are all popular decks, U/W might struggle with opposing discard backed up by Mystical Dispute. I’m curious to see if Elspeth Conquers Death and Dream Trawler will be enough to beat Kroxa.

Alright enough control decks, I get it. Let’s check out some more aggro decks.

I basically just copy and pasted this from SandydogMTG’s twitter from a month ago (I made some changes, I promise!) but I think this is definitely a good starting point. I feel like there’s some for more copies of Phoenix of Ash and maybe Ox of Agonas. They might seem like weird to have in as a one or two of, but I like the versatility of having a spell to cast from the graveyard with Ruin Crabs and Thieves’ Guild Enforcers running amock. The Mazemind Tome was an idea I got from Mike Flores, back from when we used to pay Treasures Map galore in our Mono Red sideboards, coupled with Experimental Frenzy of course. I feel like Tome could be really valuable in the mirror where you’re bringing in a lot of removal spells already. Seems like a great way to not only catch up on cards, but gain some extra life as well.

Lastly, I’ve talked about Winota all article so I’ll do her some service and put up a list.

This list actually comes from this past weekend’s Standard challenge. I really like Boros as opposed to Mardu just to have a better mana base. This list is everything I want to be doing with Winota: It has access to Bonecrusher Giant, Embercleave, Skyclave Apparition as a nice removal spell to Winota-in, and Archon of Emeria to constrict your opponents’ play after a big Winota attack. I think Drannit Magistrate and Embereth Shiieldbreaker can go from the sideboard, now that Lucky Clover is banned. I could see adding more Redcap Melees depending on how popular Winota and Mono Red are. Although I’m sure this deck doesn’t want to sideboard too many spells over creature cards.

Standard seems to be in a fairly healthy spot now. There aren’t any glaring cards that seem format-warping. Winota and Embercleave definitely stand out as very powerful and format-defining, but I think there are enough diverse strategies that will even out the playing field. The essential design problem with recent Standard cards was that there were too many cards that “doubled” your mana. Cards like, Nissa, Who Shakes the World, Fires of Invention, and Omnath are all examples of this. They’re cards that easily replace themselves and quickly snowball an advantage in your favor. The other side of this coin is that the removal spells are so lacking compared to threats. I’m a little worried about a card like Winota or Embercleave running away with the format, but I think things will be fine for the time being and I’m hopeful the next few Standard sets won’t have cards as problematic as Omnath. While Throne of Eldraine had multiple problem cards like Oko, Once Upon a Time, Fires of Invention, and Escape to the Wilds, at least Zendikar Rising only had Omnath. I’m hopeful that this Standard format and theStandard formats to come will be balanced.

What are you excited to play in new Standard? Let me know! As always, thanks for reading.