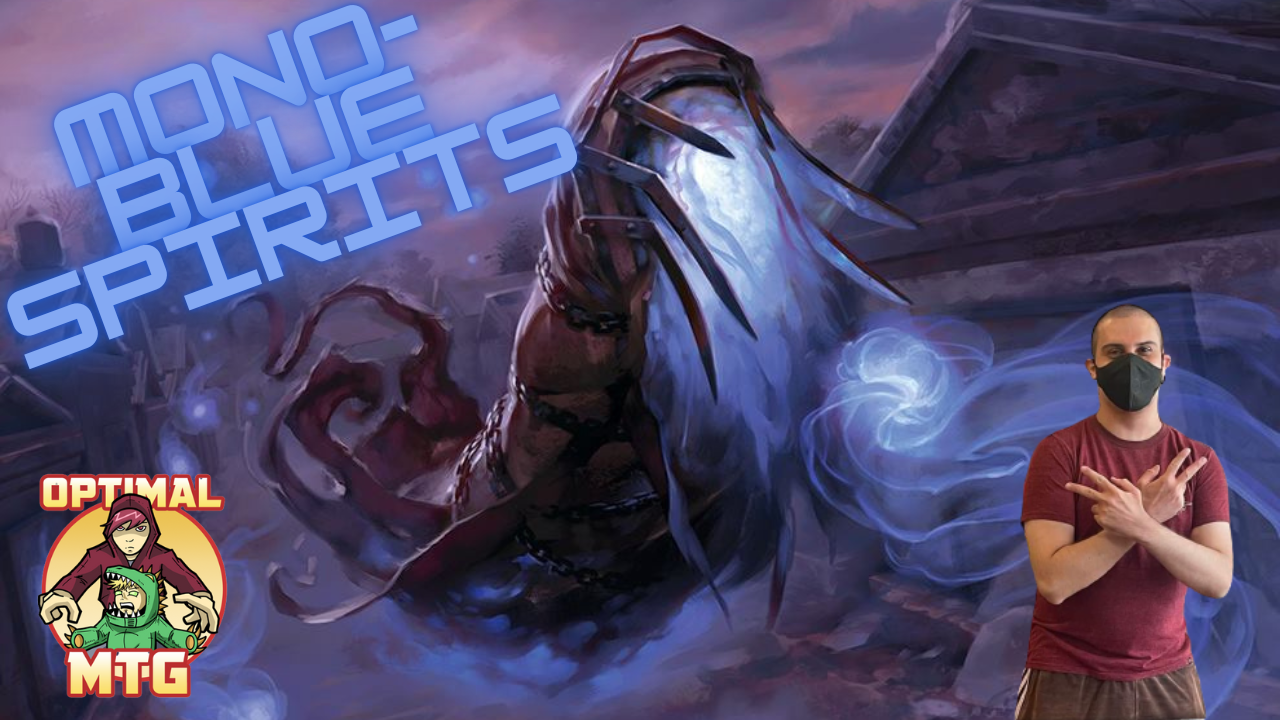 For those who don’t know me, my name is Richard Hawron and I’m a long-time Magic the Gathering Tournament Grinder from Eastern Canada.

Per the title, I am here today to talk about a sweet archetype in Pioneer, Mono-Blue Spirits.

With the pandemic mostly behind us and paper magic ramping back up due to a new Organized Play Structure plus RCQ System, I began my introduction to Pioneer with Mono-Blue Spirits as it was a reasonably competitive deck on the cheaper side of the format.

This is my current sample size for the matchups I’ve played against so far, barring intentional draws:

“Wait a second, I thought BR Midrange had a good matchup against Mono-Blue Spirits”…this is something I get asked frequently. I can understand why people think Fatal Push and Stomp would make the matchup favourable as they are clean ways to deal with aggressive matchups, however, the reality is that BR Midrange is very clunky on average and can fall behind quickly if they don’t find 3-4 pieces of early interaction as Spirits has many ways to protect itself from removal with such hits as Mausoleum Wanderer, Rattlechains, Slip out the Back, and a million Flash threats.

This is not to say that it is a lopsided affair, as most matches are likely to go to 3 games, however, I do believe that Spirits can overwhelm the removal suite that BR has to offer and snowball with enough threat pressure. Due to this, I would classify this as a 55/45 matchup in Spirits’ favour.

I have found the best matchups to be Mono-Green Devotion and Lotus Field Combo as they are both non-interactive decks that Spirits can generally ignore. Devotion does have access to Skylasher after sideboard, 2 copies usually, as the rest is an Artifact Toolbox for Karn, the Great Creator.

As for the worst matchups, Proactive UR Decks with Treasure Cruise tend to be the bane of my existence (sheds tear), having the ability to draw 3 extra cards at will, over and over again, is hard to keep up with, and can make games spiral out of control very quickly.

2
Slip Out the Back
2
Spell Pierce
4
Geistlight Snare

The Game Plan is to ensure having at least 1 Spirit in play at any time to constantly pressure the opponent until you win, whether that is through flooding the board with multiple creatures or protecting them with counterspells, hexproof, and phasing effects. Spectral Sailor/Curious Obsession will also help you stay ahead by drawing extra ways to protect your game plan.

Mono-Blue Spirits is mostly pretty stock at this point, but there are still some card choices that vary from list to list.

For my list, I currently choose to go with 2 Spell Pierce, 2 Slip Out the Back, and 2 Brazen Borrower in the main, for general consistency across the Pioneer Metagame, but, these slots are subject to change as the format continues to evolve, especially with the incoming release of Dominaria United.

2 Unlicensed Hearse – Insane against Greasefang, Great against UR Phoenix

3 Mystical Dispute – Great against Blue-Dominated Decks like UWx Control, UR Phoenix, Esper Greasefang, but not good against UR Prowess as it is more red-aligned

If you have a Pioneer Event coming up soon, I strongly suggest giving this deck a try as it is a lot of fun and is well-positioned in the current metagame.

Otherwise, I hope I was able to provide a good breakdown of the Mono-Blue Spirits Archetype, and would be happy to hear your thoughts in the comment section below!

This is the best primer on Mono-Blue Spirits in Pioneer I’ve ever read!

Thank you Alex! There will be a follow-up with more in-depth detail

What are your initial thoughts about the new obsession “Combat Research”? Will 2 copies replace Brazen Borrower or is that too glass cannon?

Combat Research is interesting, it probably fits best in WU Auras alongside Light-Paws and Sram, due to the Legendary Clause.

As for Mono-Blue Spirits, it’s possible the deck wants a 5th Copy of Obsession just to see it more often, so I’ll have to give it a try as a 1-of and see how it fits. Brazen Borrower is a card that I’ve been looking to cut, at least downsize on, so probably a 1/1 split to start off with