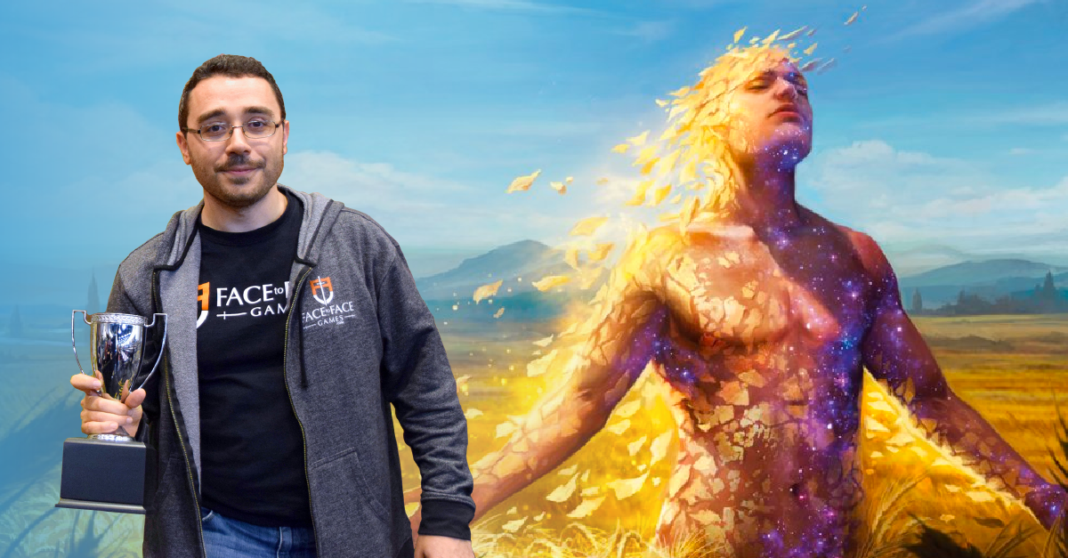 Welcome friends, I’m talking about Standard with you today. Sorry devoted Eternal crowd, but have no fear. We will return to our regularly scheduled broadcasting next week!

If you’re like me, you got tired of the typical rat race in Standard. I decided to brew something special up. I have really enjoyed playing with Hateful Eidolon and of course I love card advantage… who doesn’t? So Orzhov Auras was born!

Let’s start with the deck as I like to do and then we can get to the talkie talkie.

You’re probably wondering what most of these cards do. Well none of them are particularly powerful on their own. They do however make for excellent synergies when banded together.

We have 12 plays for turn one between Alseid of Life’s Bounty, Hateful Eidolon, and Stonecoil Serpent. This hopefully gets followed up by another powerful play on turn two. Either enchanting a one drop with All That Glitters or playing Aphemia, the Cacophony or Ajani’s Pridemate.

Eight of the one drops have lifelink which will grow Pridemate immediately upon attack. Those same eight copies are enchantments, so if the creature is removed by a spell, you’ll play Aphemia ideally and net four power on turn two with additional abilities.

Some of the easiest games you’ll have are when Hateful Eidolon is the turn one play. Then you spend several turns using Dead Weight and Mire’s Grasp to destroy your opponents creatures, drawing cards with each lethal spell.

Lurrus of the Dream-Den is of course the Coup de Gras. Meaning the powerful consistent spell we get to summon when the time is right. I say the time is right because many people are playing cards like Elspeth Conquers Death. We only have our companion as a target since the rest of the deck has a converted mana cost of less than three. So the play lines are typically wait until the ideal moment to spring Lurrus. Then ride the cat’s powerful ability the rest of the way home.

Having lots of life-linking abilities and the ability to grow your creatures makes for easy matchups against most of the aggressive decks in the format. Red decks often feel like byes whereas go big strategies like Yorion and Fires can be a bit trickier. Luckily this deck is not a known quantity and those go big strategies are still metagaming for the mirror mostly.

Main deck cards that used to be reserved for sideboards like Aether Gust, Mystical Dispute, and other targeted color based cards are mostly ineffective against this color combination. So we have inherent value in making some of our opponent’s decks functionally weak in our matchups. In addition, it’s seldom that anyone has any sideboard cards prepared for us.

Now let’s talk sweet plays because honestly that’s what I’m all about when I’m building a brew. The cool thing is after laddering to Mythic with this deck I got to pull off just about all of the plays I’m about to tell you about.

Karametra’s Blessing on any of our enchantment creatures or a creature enchanted by All That Glitters is functionally a counter for Shatter the Sky and typically brings our power above four so we also get to draw a card. If this play wasn’t powerful enough it gives it hexproof against any targeted removal spells. I know this one’s a simple one, I’ll get more complex as we go.

Mythos of Nethroi has a bonus ability if we have green mana available. So I have tweaked the mana base to include six sources of green that I believe do not hurt the consistency of the deck significantly. This way we have answers to Planeswalkers, but also Fires of Invention and Wilderness Reclamation. Since these cards are the fuel for a couple of the big strategies, it’s nice to have main deck answers that are flexible. Then post board we can bring in Light of Hope to answer others. 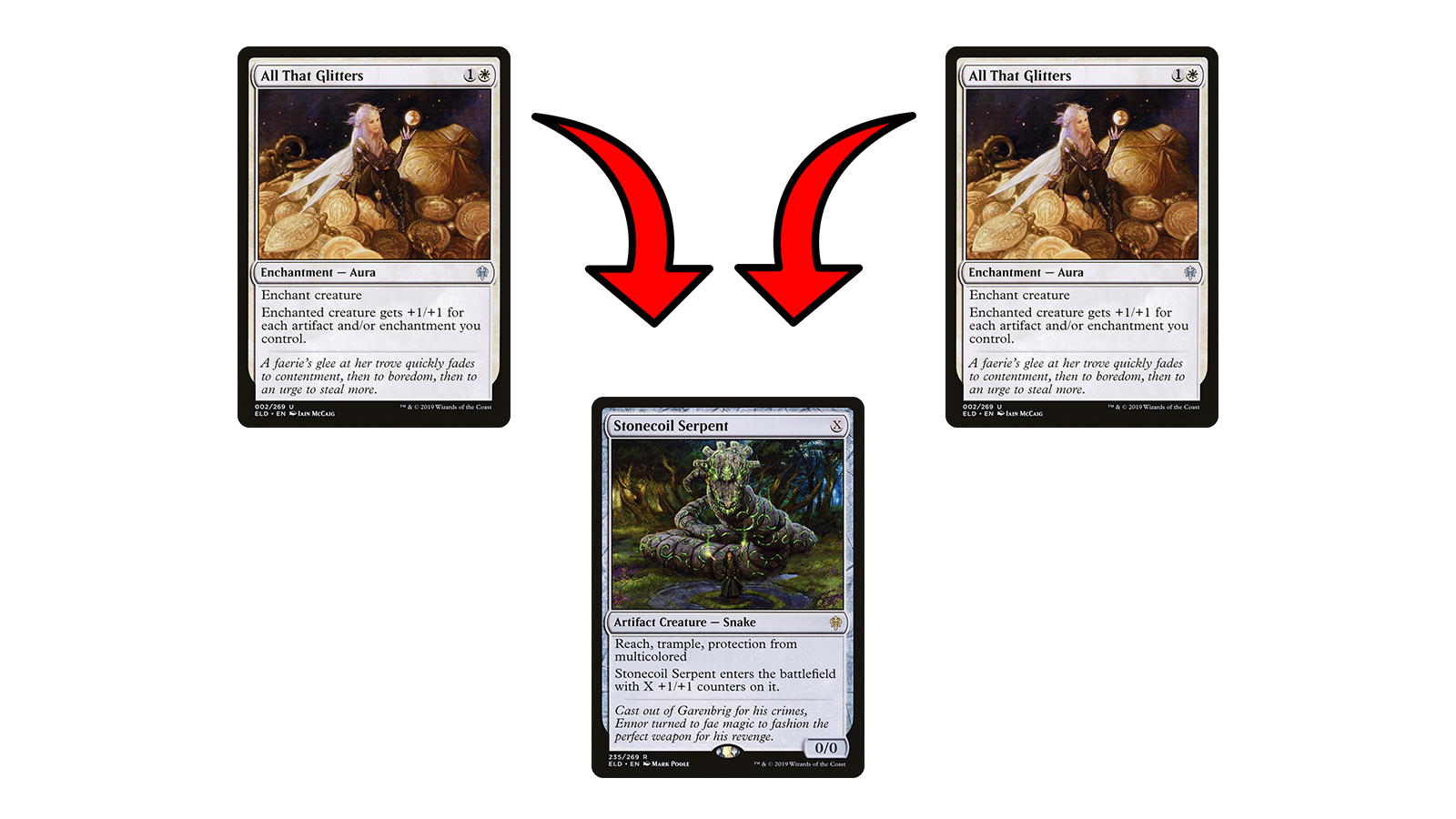 Okay so Stonecoil Serpent has protection from multi-colored spells. Most of the powerful cards in Standard are multi-colored. If you can turn one play a Serpent, turn two play an All that Glitters, then turn three play a second copy with a Drill Bit to ensure the opponent doesn’t have a Shatter the Sky. Most decks in the format will immediately lose to this line of play.

If you have a Call of the Death-Dweller in hand, we can run Lurrus of the Dream-Den out almost immediately. Not many decks are equipped to deal with the cat two turns in a row. On top of which they’ve likely already killed one of your earlier plays as well. This allows you to recur an Alseid almost indefinitely and grind out most opponents.

On occasion you’ll have the opportunity to have two Hateful Eidolons out. When you attack and the opponent is playing little to no creatures, you can use your Karametra’s Blessing to attack for more damage, gain more life, then post-combat use Dead Weight twice on your own creature. This draws four cards for you and cycles away two cards that were effectively useless in the matchup. I once did this with three Eidolons out and turned two Dead Weights into 6 cards.

A good opponent will start to respect Karametra’s Blessing. So it’s usually a good idea to sideboard them out when you’re not sure what to remove. This works better with open decklists of course. Remember that if you want to level up in magic, you’ll need to know how to bluff on some attacks. This means forcing your opponent to respect the Blessing.

Dead Weight and Mire’s Grasp can be used in conjunction on opposing creatures to take down larger sized ones. Remember that Eidolon draws you cards for each Aura attached. So we still net an advantage on these exchanges with Eidolon out. In some cases it can be advantageous to put a couple Dead Weights on a 6/6 Shark Typhoon before using Mythos of Nethroi to destroy it. Thus netting you additional draws via the Hateful Eidolon.

The sideboard is fairly straight-forward for the deck and typically there will be lots of bad cards in our main for certain matchups. Light of Hope as discussed above for Fires and Reclamation. Those matchups we do not want Dead Weight/Mire’s Grasp.

Duress similarly comes in for those matchups to remove the obstacle answers, but also great for removing planeswalker problem cards or sweeper effects.

Soul-Guide Lanter is excellent versus any deck leaning on the graveyard. This will typically be other Lurrus opponents but also some builds of Bant and Sultai lean on either Uro, Cavalier of Thorns, or Tamiyo, Collector of Tales. These decks also do not require small removal spells.

Eidolon of Obstruction is nice for disrupting the decks with lots of Planeswalkers like Teferi, Time Raveler and Narset, Parter of Veils. Having it cost one additional mana to active the ability effectively neuters them on several turns and limits decks from making multiple plays in the same turn. The additional bonus here is Eidolon of Obstruction is an enchantment itself. So it feeds into Aphemia, All that Glitters, and the whole deck really.

Extinction Event is mostly for any decks playing Gyruda or Obosh as their companions. Since it can be a one-sided sweeper and the exile is effective in many of those matchups. It felt better than a traditional sweeper because we normally want to be progressing our board state with creatures as well. I would bring these in against Cavalier versions of Fires as well.

The most common method of finishing off the opponent with this deck comes from Alseid of Life’s Bounty. Giving a creature protection from a color against most decks is enough to make it unblockable. If the creature is a large Pridemate or has an All That Glitters on top of it, you can generally ride that method home to victory. Just do not forget if you give a creature protection from White to make it unblockable the All That Glitters would fall off. Luckily many of the White creatures in the format are multi-colored and also contain Blue.

Alright that’s all for now. I expect I will continue to work more on this deck over time. I welcome any feedback from anyone else wanting to give it a swing. It definitely performed the best for me overall when laddering. The most common opponents in BO1 ladders are mono red and that’s our most favorable matchup. Be sure and come back next week for my latest article on another sweet deck in Modern!

UPDATE: Yorion Fires has spiked as the best deck and this is how I would adjust the deck to combat that.