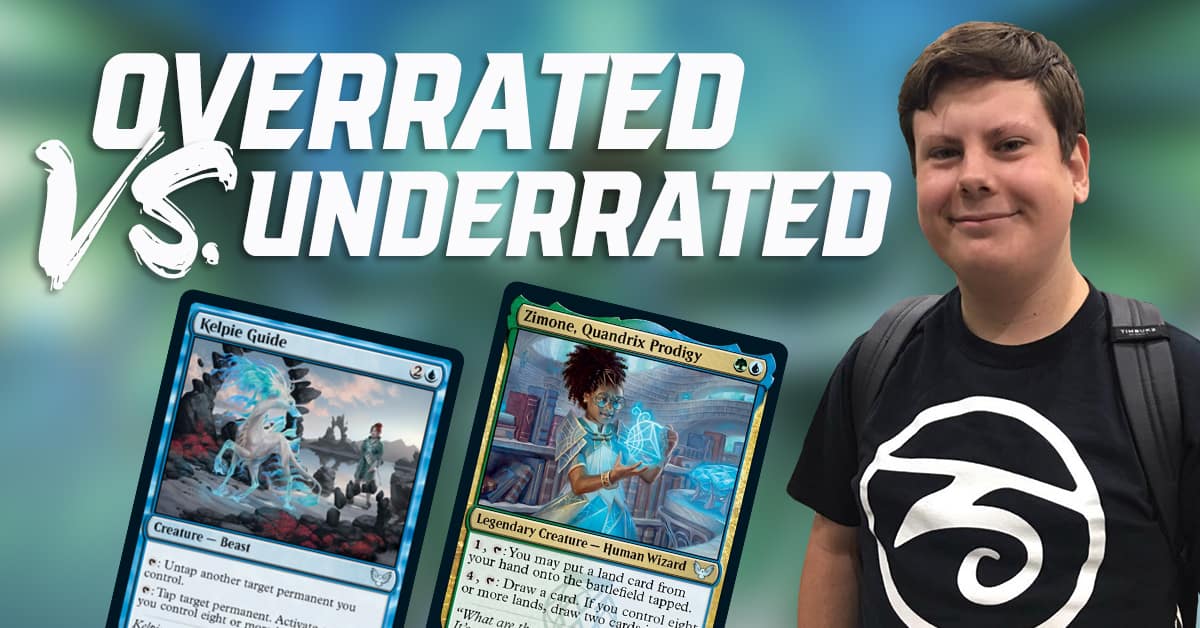 Ever since spoiling Aether Helix for Strixhaven I’ve found myself an avid scholar of biomathematics. I’ve found my calling, at least in Strixhaven Limited, and it’s to draft Quandrix decks as often as I can.

With some initial success in the format, I’ve enjoyed drafting Quandrix most for a variety of reasons. Blue and Green have both powerful and versatile cards on their own, and some valuable multicolored cards as well. Quandrix prides itself on casting spells to ramp and create threats, eventually burying the opponent in card advantage.

However, in best of one drafts on Arena it’s important to keep in mind a few things. It’s no secret that best of one queues highly favor aggressive strategies, taking advantage of zero sideboarding. It’s easy to get lost in the sea of potential Quandrix cards, especially when making the last few changes to your draft deck.

After playing over a dozen drafts, here are my thoughts on what cards in Quandrix you should look for and which to avoid. Let’s start with the overperformers.

Kelpie Guide – Kelpie Guide has over performed for me in draft. While on the draw, a 3 mana 2/2 isn’t the most exciting, but the card’s versatility is what makes it so powerful in Limited.

The untap ability of Kelpie Guide has numerous small interactions. At its worst, the untap ability can target your lands, making Kelpie Guide a makeshift mana dork. However, think about these other minute interactions. Kelpie Guide can save your creature from an Expel, blanking your opponents removal and letting you attack into untapped three white mana with confidence. Kelpie Guide also negates one half of Snow Day or Frost Trickster’s ability, derailing your opponent’s plan of tapping down your best creature. There are some other cute interactions too, such as activating your Zimone, Quandrix Prodigy to draw cards twice in a turn or untapping your Overgrown Arch to gain 2 life a turn.

At it’s best Kelpie Guide acts as a makeshift Gideon’s Lawkeeper, locking down your opponent’s best threat and making their attacks (and blocks) that much more difficult. Kelpie Guide is a premium uncommon that has impressed me each game I’ve cast it.

Symmetry Sage may not look that good on rate, but in your draft deck where a lot of your threats are spells (Serpentine Curve, Leyline Invocation) you’ll be able to activate it most turns. One thing I’ve discovered playing Quandrix is that your late game is very powerful, with cards like Bookwurm and spells that make large fractal tokens, so it’s important to protect yourself from getting run over early. The games I’ve lost the most on Arena usually end with me drawing too many spells.

While in draft, it can be a bit of a drawback to play counter spells in best of one queues, decks on average are playing more instants and sorceries than in other formats. Negate and Test of Talents are useful in countering spell threats, such as Serpentine Curve and Elemental Masterpiece. Test even gives you some potential information about the contents of your opponent’s hand, which can prove useful when you’re considering how best to use your counterspells and removal. There still is risk in running these maindeck in a format where you can easily get run over by a Lorehold or Silverquill strategy

Speaking of getting run over, Karok is a pretty useful answer to early game threats, such as the various 2 and 3 power creatures in Lorehold and Silverquill. Karok provides a strong buffer at the start of the game, allowing you to freely Eureka Moment, Cultivate, and Harmonize to your heart’s desire. Since Quandrix decks thrive in the late game, Karok will provide you the time you need. I also like it a bit more than Springmane Cervin because of the high toughness (which is more useful than gaining two life).

On that note, Overgrown Arch is another 4 toughness creature which can help stave off a potential onslaught. Arch acts both as a fantastic blocker while gaining you life in the meantime, even giving you a chance to find a Lesson later in the game. Arch also combos nicely with Honor Troll, effectively putting you out of reach of potential evasive aggressive creatures your opponents might have. When you are ready to learn with Overgorwn Arch be sure to tap it first to gain a life! I cannot tell you how many opponents have missed that.

Now onto the cards which have underperformed for me.

Zimone is a card that’s very near and dear to my heart. I’ve absolutely loved this card in sealed, it’s an incredible value engine that can also put you ahead on mana. However, in draft Zimone isn’t an impactful play until later in the game. You also have to be careful of dealing yourself too much deck damage by drawing three cards a turn late in the game. Zimone shines when your hand has multiple lands and you can ramp into an early Leyline Invocation or Bookwurm, but overall it’s a bit too slow to justify playing in best of one queues, especially against various white aggressive decks.

Don’t get me wrong, I’ve cast Golden Ratio at times to draw 3 or even 4 cards. However, this card takes setting up, and it’s pretty useless on the back foot in the first five or so turns of the game. Quandrix has so much card draw already, in cards with Learn, Pop Quiz

Waterfall Aerialist is another card that isn’t inherently bad, but other cards in the format make it arguably a lot worse than it seems. Aerialist matches up incredibly poorly against the black decks, playing cards such as Eyetwitch, Inkling Summoning, and Umbral Juke. White decks have access to Stonerise Spirit and Pillardrop Rescuer at common as well. Overall, multiple colors have ways to profitably interact with Waterfall Aerialist without needing to cast instant or sorcery spells to target it. I’d be most happy to play this card in a Quandrix Mirror, but a 4/4 Scurrid Colony or Master Symmetrist could easily stop me in my tracks.

Biomathematician is a card I’m actually happy to play, but only if I have at least 3 or more copies. It also goes up in value depending on how many fractal makers you have as well, such as Serpentine Curve or Emergent Sequence. A lone Biomathematician is mediocre at best.

Needlethorn Drake – Needlethorn Drake is another card that looks great on paper, but has underperformed. Drake can easily get outclassed by an opponent with multiple Inkling tokens or Unwilling Ingredients. It’s better against bulkier creatures that become more potent as the game progresses, such as Quandrix Pledgemage and Tome Shredder. However, there are situations where this card might even be worse than a Spined Karok. Worth nothing, Drake plus Devouring Tendrils is a clutch removal spell.

All in all, while some of these cards might be better or worse than I have rated in best of three, it’s important to keep in mind how to structure your decks in a format with no sideboarding. Quandrix decks have the potential to be overly grinding and durdly, packing way too many card draw or ramp spells leading to a swift defeat from an aggressive Lorehold or Silverquill strategy. It’s important to keep in mind when both drafting and deckbuilding what pieces your deck needs. Sometimes it’s more important to pick a Spined Karok over a draw spell, or a Kelpie Guide over a Zimone. Consider both how your cards interact with each other and against common cards played in the format. With enough studying you’ll be sure to ace all of your drafts!