Ramping up your Commander deck 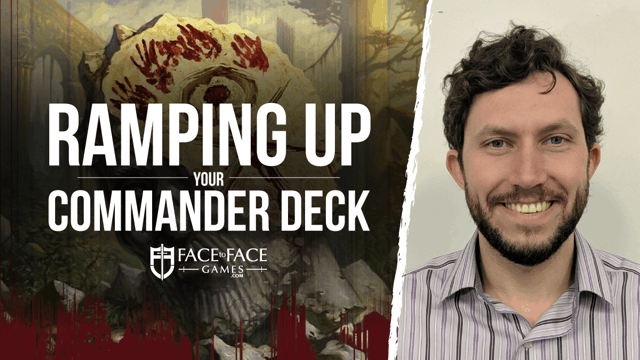 Have you ever wondered why Sol Ring is such an iconic Commander card?  Or why ramp in general is so highly valued? Today I want to dive into just that — let’s talk about ramp in Commander.

The Command Zone has a great two part episode on manabases where they touch on the importance of ramp and fixing. We’ll hone in on ramp, which is of course any effect that allows you to accelerate your mana (ramp can provide colour fixing as well). Ethan, one of the C19 designers, shared his views on ramp at GenCon recently:

“Well, I’ve noticed that stumbling on mana in Commander is death. A person who misses their first land drop frequently is the person who loses. Which is one of the reasons that Red/White struggles so much. You can hit your land drops either by directly ramping or just by drawing extra cards so you naturally draw extra lands. R/W is pretty bad at both of those things. It’s just key to have the power to cast multiple spells per turn to activate multiple things per turn or to cast really big spells in your turn. Just because you need to have big impactful turns if each opponent has a turn for each of yours.” – Ethan Fleischer, Designer WotC

This just scratches the surface. Being able to efficiently cast your cards is a very strong rationale for playing ramp, but I’d argue playing your strong cards ahead of schedule is even more important. Cheating mana cost is a very powerful effect in Magic — perhaps the most powerful. [Card]Hogaak[/Card] recently made up the majority of the MC Barcelona Modern meta, but it was ultimately won by a Tron list (which obviously also cheats on mana costs). From my perspective, one of the strengths of cheating mana is the tempo created by it, or the fact that you have access to more resources than your opponent.

While you do need to take some turns off of developing your board in order to accelerate, it’s often worth it when you’re able to double spell or play an eight-drop on turn five. Ramping your mana to outpace your opponents is all well and good, but you still need impactful cards to take advantage of your lead. Playing an [Card]Omniscience[/Card] on turn five can be a game ender, or maybe it’s a two card combo on turn four. The point is, if you’re going to be taking turns off you need to be sure that it’s worth the payoff.

There are two prominent ways we can ramp in Commander — putting lands into play ahead of schedule or using artifacts to create mana. Both come with risks, but putting lands into play is usually safer since most Commander players dislike mass land destruction and your lands will survive most wraths. On the flip side, artifacts can ramp you far faster, and lead to some explosive starts. The dreaded turn one [Card]Sol Ring[/Card] into a relevant signet gives that player five mana on turn two, which can create a huge advantage. The worst part is that player will likely remain three mana ahead of others unless some ramp or removal is used. These are frankly some of the most format defining sequences in Commander, which is why ramp is so integral to the way the format is played.

To really see the strength of ramp, it’s easy to look at competitive EDH (Elder Dragon Highlander is the original name for Commander) for reference. For those unfamiliar, cEDH is about playing the best of the best. The goal — unlike most games of Commander — is to win — not put fun first. So as you can imagine, games are often over by turn three or turn four.

There are usually quick infinite combos and a ton of counterspells (to prevent opponents from completing their combo). cEDH decks often don’t have a budget, so they’ll run expensive cards like [Card]Bayou[/Card] or [Card]Ancestral Recall[/Card] and busted ramp cards like [Card]Mana Crypt[/Card]. To get a good handle on the type and amount of ramp that’s used in cEDH let’s take a look at four lists:

One key distinction in this ramp package is the average CMC of 0.8. These ramp spells make sure the deck goes quickly, but the price tag for some of them is too high for my liking. You won’t see a [Card]Mox Diamond[/Card], [Card]Noble Hierarch[/Card] or [Card]Mana Crypt[/Card] in my decks.

For Chain Veil Teferi the main game plan is to make infinite mana using [Card]Teferi, Temporal Archmage[/Card], [Card]The Chain Veil[/CArd] and [Card]Power Artifact[/Card]. This will generate infinite mana which can be used to cast a [Card]Stroke of Genius[/CArd] to mill the opponent out. Like Food Chain Tazri, this deck also wins consistently on turn three or turn four.

The average CMC of this ramp package is a little higher at 1.8, but that’s due to the inclusion of [Card]Rings of Brighthearth[/CArd] and infinite mana combo pieces [Card]Grim Monolith[/CArd]/[Card]Basalt Monolith[/CArd]. There’s also a [Card]Mana Crypt[/Card] and a [Card]Mox Diamond[/CArd] in here as well. This deck runs a lot of counterspells and card draw to make up for the limited access to ramp in blue.

There are a few lines of play in Breakfast Hulk (the deck is named after the Cephalid Breakfast combo from Legacy: [Card]Cephalid Illusionist[/Card] and [Card]Nomads en-Kor[/Card]), with most leveraging [Card]Laboratory Maniac[/Card] and drawing from an empty library. There a few tricks to thinning the library in [CArd]Hermit Druid[/CArd] or the Cephalid Breakfast combo, and both combos can be tutored with [Card]Protean Hulk[/Card]. This deck can win as early as turn zero if the three cards pictured above are in the opening hand.

With an average CMC of .86 for this ramp package, it’s very similar to what we saw in Food Chain Tazri. In fact, 13 of the 15 ramp spells are shared across the two decks. It should be no surprise that we also see [Card]Mana Crypt[/Card] and [Card]Mox Diamond[/Card] in this list as well.

Once again, [CArd]Laboratory Maniac[/CArd] takes centre stage. Most combos in Zur [CArd]Doomsday[/Card] include Lab Maniac and drawing from an empty deck. Without access to green, there’s no [Card]Hermit Druid[/Card] so this deck runs a few different lines of play, with [CArd]Doomsday[/Card] being the namesake combo. The Doomsday combo works by building “piles” of five cards, often you want to stack the piles with card draw and end the game with a Laboratory Maniac in play. A five card pile from this list could be: [Card]Preordain[/Card], [Card]Gitaxian Probe[/CArd], [Card]Ponder[/CArd], [Card]Sleight of Hand[/CArd] and [Card]Laboratory Maniac[/CArd]. There are also some alternatives combos in [CArd]Demonic Consultation[/CArd] or [CArd]Ad Nauseum[/Card] and [Card]Angel’s Grace[/CArd] that can secure wins from an empty board.

While not as fast as the decks with green, the ramp spells in Zur Doomsday have a low average CMC of 1.1. Interestingly, this list leverages some signets and more costly mana rocks (2 CMC) which drives the average up. All the pricey artifact ramp is here as well, leveraging [CArd]Lion’s Eye Diamond[/CArd], [Card]Grim Monolith[/Card], [Card]Mox Diamond[/Card] and [CArd]Mana Crypt[/CArd] to secure quick wins.

Fast Mana wins games. Looking across all four of these cEDH lists, they’re all running zero cost artifacts that make mana to be able to cast multiple spells a turn. cEDH players aren’t concerned about board wipes, since the game will likely be over before one can be cast (assuming it resolves, which is unlikely looking at the lists). If we look at the stats, most of these lists are above 14 ramp effects so they’ll likely have what they need in their opening hand. The fact is, when everyone is trying to end the game so quickly, you get to skimp on a lot of the slower interaction that other Commander decks offer. That said, you miss out on a lot of the fun and creativity that Commander is known for. These decks have really strict ramp and combo requirements, so there’s not a lot of wiggle room for fun.

cEDH isn’t my cup of tea, but it provides a good example of how influential ramp can be. If you want your non-cEDH decks to be more competitive, ramping is a good route to take your list. If we’re not dropping combos on turn three or four, what are we going to do with this excess mana? We play our finishers like [Card]Craterhoof Behemoth[/CArd] (or [Card]End-Raze Forerunners[/Card] for the budget conscious) or [Card]Death to the Debtless[/Card]. Or maybe we just want to play our cards, and being able to play more never hurts.

Like I said earlier, we should also consider the tempo built by ramp. Let’s try a fun thought experiment. In a pod of four we have two players of interest: Sam who refuses to play ramp and Alex who loves ramp. Sam plays their first five turns on curve (hitting a one-drop, then two-drop etc). Over these five turns, Sam was able to generate 15 mana. Alex uses their first three turns to ramp ([Card]Sol Ring[/CArd] t1, [Card]Selesnya Signet[/Card] t2 and [Card]Kodama’s Reach[/Card] t3), then plays seven CMC worth of spells on turn four and eight CMC worth of spells on turn five. Alex uses effectively 24 mana, and didn’t use all of their mana on each turn (two unused from t2 and three unused from t3). If this game goes long, Alex will have a lot of turns with more resources available. These extra resources won’t win Alex the game on their own, but Alex now has a meaningful advantage over Sam, and is likely to win the game.

Playing ramp spells is a format defining aspect of Commander — one that allows for some of the best story-telling through game play. It’s also critical for winning in a multiplayer format. Winning a game with three opponents is statistically more difficult than winning against one opponent.

To edge out your opponents in Commander you need to out-value them when it’s basically three on one. Playing more spells is the best way to do this, and you’ll need lots of mana to do so. Next time you’re tweaking an old favourite list or building a new one, add more ramp.