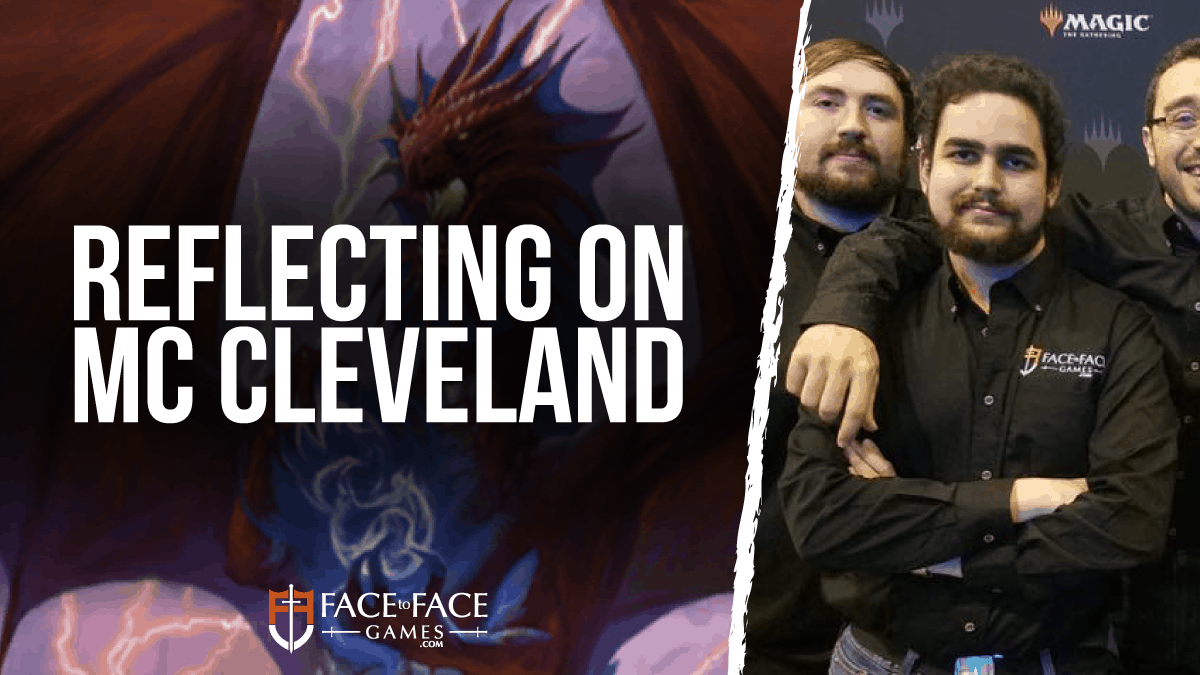 Coming off the heels of the first Mythic Championship in Cleveland last week, there is a lot to reflect on. Team Face to Face Games had a medium, but somewhat successful weekend. Pete finished the best out of any of us, with a 12-4 and Top 16 finish. Shaheen had a disappointing final few rounds which left him at 10-6 and just a couple points short of renewing his pro status. Myself and Gab finished just under that at 9-7, which was fortunately just good enough for me to qualify for the final two Mythic Championships of the calendar year. Overall, we climbed up to 15th place on the Team Series leaderboard, which still gives us time to get some strong finishes and catch up. 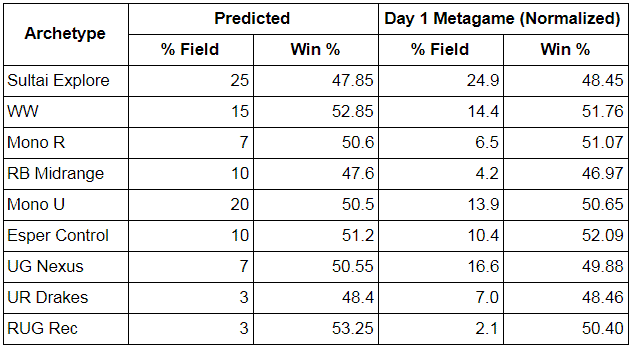 So what could we have done better?

There is a lot of emphasis in the Magic community on the importance of the preparation leading up to an event, but not a whole lot on the process after the fact. Good testing and optimal tournament practices are topics that are reiterated time and time again but not too often do you read about how someone looked back and determined where they were lead astray by their assumptions before the tournament.

My teammate Morgan wrote last week about the somewhat mathematical approach we took to deck selection. An easy first step, and one that we took basically immediately after receiving the information, was to take the Day 1 metagame breakdown and plug it into our Matrix to see how far off we really were.

Honestly, we weren’t too far off, but the mistakes we did make had some relevant influence.

Our first offense was putting too much stock in the recent success of the Rakdos Midrange deck in the hands of Jody Keith prior to Cleveland. We thought more people would be quick to hop on the bandwagon, especially with the promises of a favorable Sultai matchup. In our testing we determined the deck to be pretty mediocre across the rest of metagame, and the horrendous Nexus matchup was not something to look forward to. Perhaps we should have given more people credit for coming up with a similar conclusion.

Which leads us to our next, and most costly mistake, Simic Nexus. Perhaps our testing got inbred. Maybe we just didn’t understand something fundamentally about the nature of the deck. But to us, the card [Card]Nexus of Fate[/Card] kind of just sucked. Without the powerful [Card]Wilderness Reclamation[/Card] in play it seemed as if the deck so easily crumbled, especially in post-board games, but apparently others didn’t agree. The huge boost in metagame share caused some wild fluctuations in the decks we thought would succeed at the MC.

Looking at the final results from the Mythic Championship, I am reasonably pleased with our calculations. Sultai ended up underperforming, which was to be expected, and the Top 8 featured a collection of high win percentage decks, including a few exceptional players piloting Mono-Blue.

So what about Temur Reclamation? As a team and affiliates we were able to sport a total of 23 wins and 17 losses with the deck across five pilots, for a 57.5% win-rate. Not the best result, but Morgan swore that he would never register another non-midrange deck after his 0-5 performance with the deck and after 3-0ing his draft pod.

The deck, by most accounts, performed exceptionally. Historically, for many combo decks in both Standard and formats beyond, the biggest balance to strike is how to maintain power while also ensuring that your deck is capable of functioning though disruption. As I mentioned earlier, we felt as though the Simic Nexus deck had a fundamental flaw where its aforementioned card was basically a brick in your hand when you didn’t have reclamation in play. Both Niv Mizzet, and [Card]Expansion // Explosion[/Card] have super relevant impact on the game without any support, and are as close to, if not just as game ending when you go off. 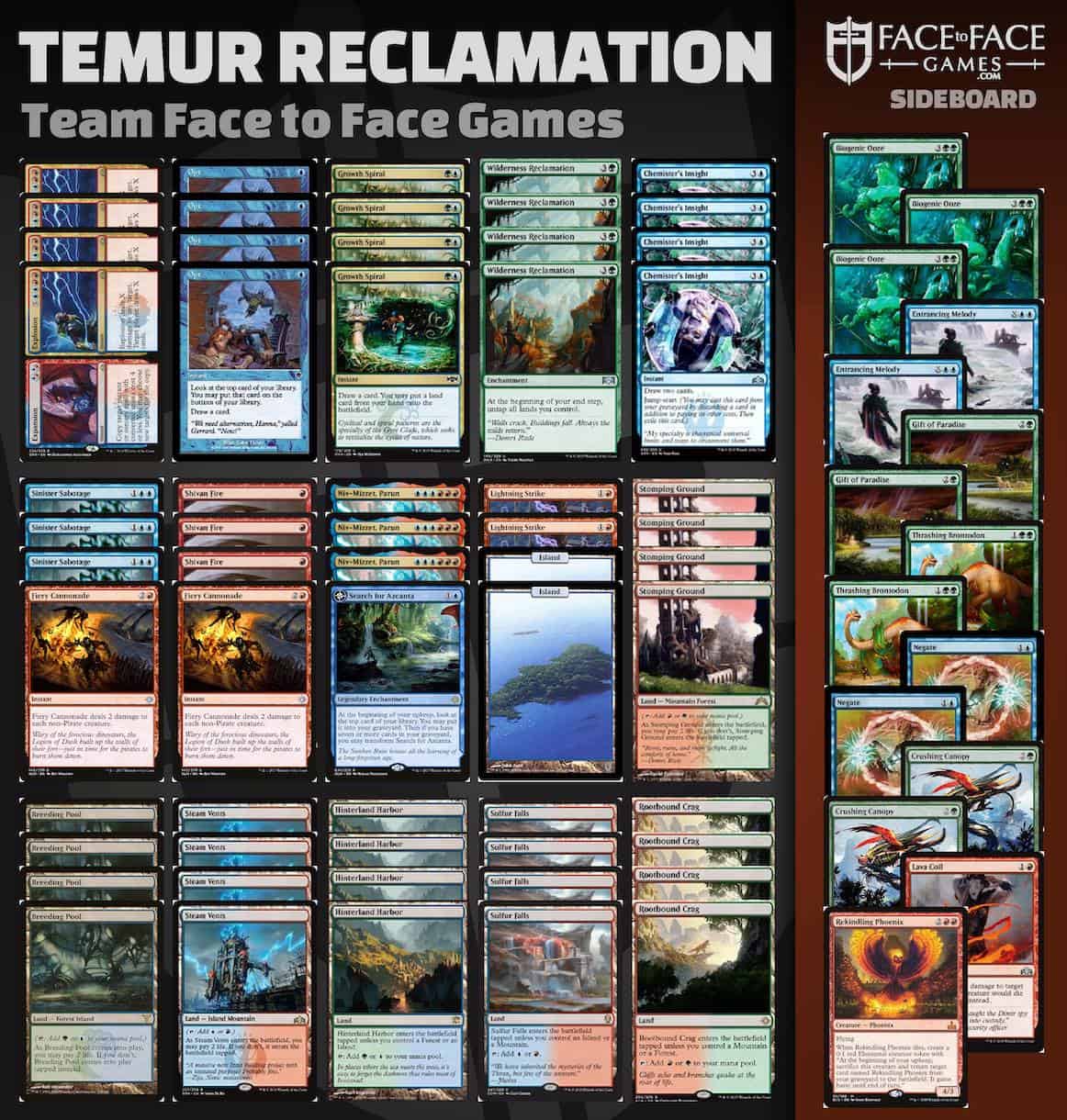 Personally, two of my losses were to White Weenie, and I know Jake had a similar experience. I think if we were to play the event again I would spend more time trying to figure out a way to significantly improve that matchup since I think it is the most glaring hole in the archetype’s viability. Pascal Maynard’s list deviated from ours slightly, and part of that deviation was that he had the full four copies of [Card]Fiery Cannonade[/Card]. That could be a good enough answer in and of itself and him performing the best out of any of us could indicate that.

All in all, I think our preparation and process as a team was good for this event. In this new age of Magic where there is so much information readily available, it is much more difficult to get an edge for these large scale tournaments. In the future, I think we could benefit from creating the matchup matrix earlier in the process, so that we can change our trajectory from choosing based on it, to building off of it in order to capitalize on the expectations.