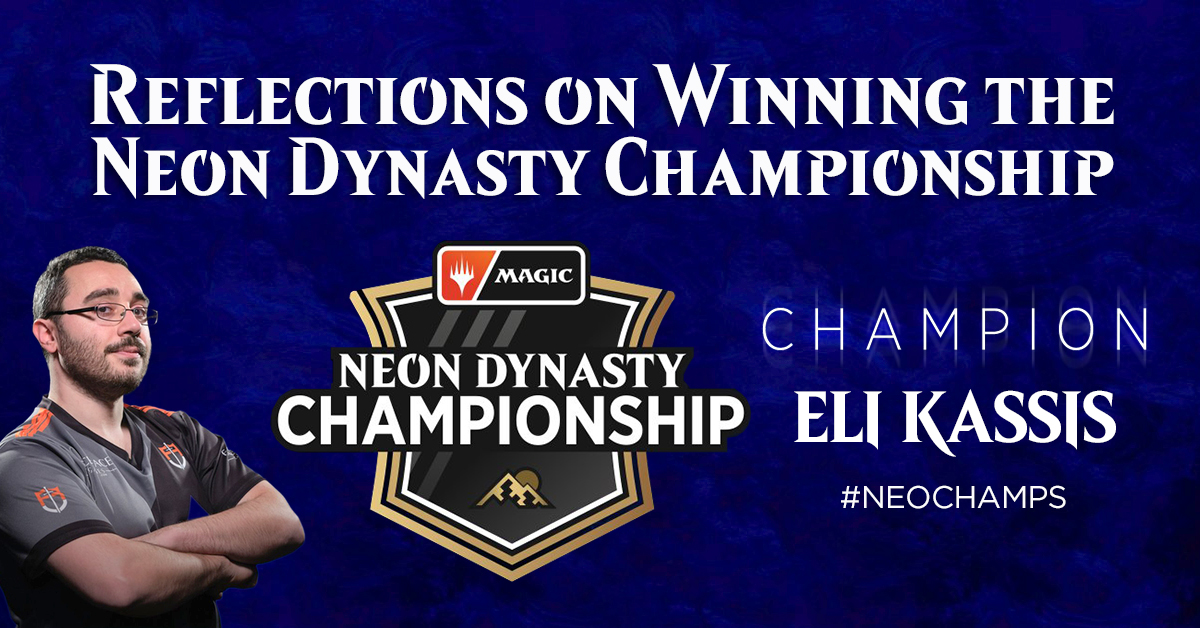 I have to go with my gut on this one – I don’t feel like I’ve won a Pro Tour (well, Pro Tour equivalent). I’ve been in this game for long enough to know that doesn’t necessarily mean I didn’t. The me that’s smiling on the front page wants to believe this is true. Cause if it’s true, then what? Maybe I’ve made it? While I was incredibly happy and honored to win the Neon Dynasty Championship, I’m still left wondering – do I think I truly deserved this win? It’s hard to put into writing what I’m feeling after this event.

This isn’t my usual article. I’m not going to just post a decklist and dissect it for you. Or go into my matchups and break down things play by play. I’ve done a slew of podcasts already if that’s what you’re looking for. Today I’m going to show you a corner of my mind. Let’s jump in, shall we?

I’ve been playing Pro Tour-level events since 1996. I started playing Magic when I was just 10 years old. I had the highest of aspirations back then, that false bravado one can only have when they are too young to know any better. I poured all of my free time into testing and trying to improve my game. Thinking back, I thought earning some sort of quantifiable victory would achieve some sort of validation from my circle of friends. As someone who’s felt like an outsider all their life, I set my goal to be victorious in these events.

Throughout my years of playing I have had a slew of achievements that I am proud of. The validation I sought however did not come after a Grand Prix victory or even two. Then finally, in one of the “real” Pro Tours, I managed to run hot as the sun and make the Top 8. I don’t know how to adequately explain how this changed things within me. I can explain that this led to me making the Rivals league, then onto the MPL, and then Worlds. Caps to an already solid career, but it was this turning point that made me feel like I could belong within the ranks of pros.

I’m sure readers are surprised that it took this long and this much to attain that feeling. One of the feelings I want to convey is the world isn’t exactly fair. I may have achieved some things I consider noteworthy, but that doesn’t always mean people will view it that way. I had become accustomed to some pros achieving a level of recognition far beyond my own with far less tournament success. I wasn’t going to complain about it. I wanted to keep going until I hit that level of success as well, even though I’m not sure I knew what it would even take to reach that point.

Regardless, now I have won the Neon Dynasty Championship and that has really changed my world. People are talking like I have won a Pro Tour. I get to go to Worlds again, which is exciting but at the same time it’s also a little intimidating. Not because of the money involved, there’s a pressure involved with performance at a high level that gets worse after a big win. Almost as if to say, was it a fluke? Can I live up to my performance again? What happens if I can’t? I often see on Twitter discussions of which pros are living up to longevity and whose skills appear to have diminished. I don’t think it’s toxic or anything, but the premise lives in my mind. It’s honestly a lot to take in after being on such a victorious high.

I don’t want to give the impression that I am fragile. What I really want is for this article to normalize expectations of me, whether that’s to reduce expectations and thereby reduce the pressure we put on ourselves. Or to feel like I’m more a part of the outside crowd who now traverses both worlds, a different place than I was for almost 30 years, feeling like I was always looking in. The surreal feelings I have now are hard to describe. It’s odd to feel good, but not be able to label it. I imagine that’s what lottery winners might feel like. Playing over and over, wanting to win, but never expecting it to actually happen.

Our conscious and unconscious selves not being in alignment is common in my job. For those that do not know I’ve been a Mental Health Counselor for the last 13 years. So I see it all the time in people. Seeing the process happening within them helps me to imagine my own internal process. I’ve seen people who come closer to a place of satisfaction as time fills in the gap. To be clear, that is satisfaction within themselves of having their two selves overlap. I want that as well, but I have seen that it cannot be rushed.

Funny story, at SCG Indianapolis I went with a crew of players over to “Punch Bowl Social.” After a few drinks we started playing quite a bit of ping pong. After facing who would later be the “End Boss”, Roland Chang, and then winning, I jumped for joy around the room spreading high fives all around. MTG Arena superstar Covert Go Blue, AKA Dan, joked that I hadn’t shown that much expression after winning the Pro Tour.

I’ve always told my wife that playing the part of being the therapist in therapy doesn’t exclude you from the benefit of therapy. Healing with others rather than simply helping others heal is something I didn’t expect to happen when I entered into my profession. I’m not sure I could even explain it to my younger self if I had the opportunity. I’ve been headstrong and blind simultaneously at many points in my life. The wisest thing I’ve learned from the smartest people I’ve been fortunate to be around is to question everything and stop underestimating anyone – yes that includes yourself.

I used to think the statement was simple. “Everyone puts their pants on one leg at a time.” I’ve probably thought about it too much, but here’s some of what I have gleaned. What makes someone intelligent or even brilliant? Do they have a really impressive memory? Maybe their processing speed is really fast. How much does experience play a part? Or education, or upbringing, or the culture, or the environment? Do we all start at a similar spot? We instinctively seek definition and the easiest way to do that is to distinguish ourselves. I’ve certainly been guilty of that, but maybe it’s a trap.

I’ll always enjoy attempting to be the best. Competing is fun for many reasons I don’t have to tell you. Maybe what I am learning is to try and have more fun with it. Even though what we do certainly guides us along one of the many paths. I’m not trying to advocate for any deterministic philosophies here, just that we are all born into a role and that it’s in our best interest to do what we can with the resources that we’re given.

Even as I am writing this article I’m thinking about deleting it. “What if it appears too nihilistic?” has run through my mind several times. Maybe I should just give them the old usual article, put in my 1,500 words and call it a day. What I learned from this Pro Tour Top 8 coverage is that it’s hard to hide who you are. People all over the world were spamming chat with jokes about my expressions. It was written all over me plain to see. So here I am, open for anyone to see, hoping my experiences can help put words to feelings others may have had, have, or will have. Know that you are not alone.

See you at the next one.