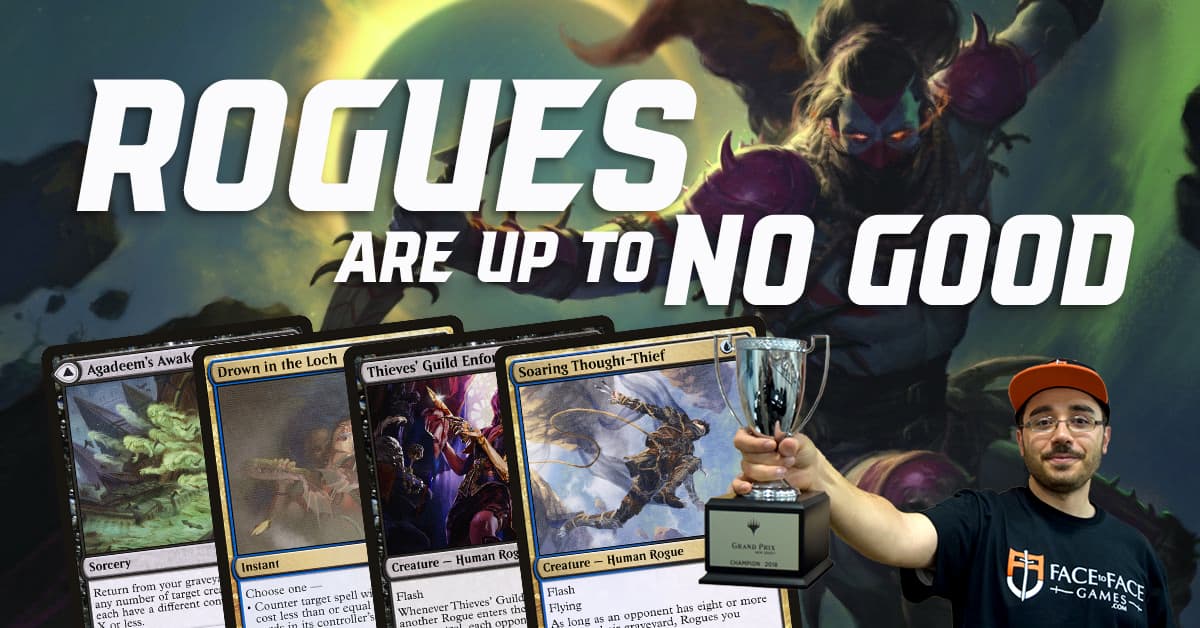 With Gruul dominating the map we have seen the Rogue decks diminishing in popularity for Standard. This is based on a few assumptions: that Gruul dominates Rogues and that there’s no good way around it.

Now I can’t argue that if one wants to build Gruul to specifically beat up on Rogues, then there’s very little we can do about it. The same is true for most other decks as well. Rogues has some glaring weak spots that can be taken advantage of. I would say that many Gruul players at the last League Weekend felt like they were in a tight spot as many players were packing a lot of hate for Gruul now.

So, like all evolutions Gruul has to adapt to face the variety of things being thrown its way. With that we see a reduction in Rogue hate. This leaves the opening for Rogues to reenter with an abundance of Gruul hate. Which is exactly what I did for the last League Weekend.

I ended up facing Gruul five out of the twelve rounds. I went three and two versus it overall. Often the die roll was very important or the draws lining up for them or me. Here’s how I approached the matchup with my list being pre-sideboarded for Gruul:

Often, I would board in one copy of Extinction Event, removing a Call of the Death-Dweller from the main deck if I was on the draw and they were playing sufficient copies of Scavenging Ooze or Klothys. Otherwise I would leave the main deck as is and not sideboard at all. Many on my team were surprised by this approach, but essentially, you’ll want to remain proactive and not get stuck in the trap of becoming reactive with this matchup.

Yes of course there are times where the rule isn’t ironclad. You’ll want to Eliminate their turn three Love Struck Beast so that they cannot cast a turn four Great Henge. Although sometimes you allow it to live so that they do cast it into your Jwari Disruption and so they cannot cast it later. Either way we want to stay in control and put them on the backfoot whenever possible.

Sequencing an Enforcer, into a Thought-Thief, into a Nighthawk Scavenger, and then a turn four Zareth is almost a guaranteed “lights out”. Now this is hard to ensure as we have tapped lands in our mana base. So, there are bumps along the way, but you’ll hope to utilize your counters and removal on these turns while the deck prepares for the one-two punch.

Zareth is a fascinating card that dictates you know what most of the cards you might steal fully do. I’ve stolen Great Henges, Embercleaves, but Skyclave Apparition and Yorion almost cost me a game in the split weekend. Yorion actually dictates card you own, not one that you control. I imagine that is for the players who do not realize that cards would reappear under their owner’s control anyway. With Skyclave Apparition the same owner clause exists. So, if they have stolen a permanent, you steal Apparition and target the stolen permanent. Then they kill your apparition, you actually get the token creature and not them.

Pretty funny aside, be careful taking Embercleave with Zareth. While you may get two additional triggers on the next combat, if they have the Akroan War and steal Zareth with Embercleave attached, the game may swing all the way back over to them.

Soul-Guide Lanterns were a choice I went with to prevent Rakdos decks from taking full advantage. Since with Cling to Dust if we target a creature, we do not draw a card. I determined that Lantern might be preferable. I definitely missed the playability of Cling to Dust throughout the tournament however and I’ll be revisiting its inclusion in the next build.

Mystical Dispute is just an easy inclusion if facing the best color in magic. The additional Call to the Death-Dwellers were in preparation for mirror matches, but also lists with heavy removal that do not exile. I happened to only face one other Rogues player in this event so they didn’t have much impact for me. I did bring them in against one of my Gruul opponents who didn’t lean on Ooze and Klothys as much and they were decent.

Shark Typhoons are great versus decks that pack too much removal. Excellent against Rakdos colors in general because they tend to not have answers for a resolved Shark Typhoon. Since the cycling mode is most often used it will feel strange to aim for putting the enchantment into play. Many games were won for me and my team in the first Split Weekend with this strategy.

The Extinction Events are for any of the heavy aggressive decks where it is good to switch tactics. With this build the Crab versions of Rogues are one such example. Rakdos Decks where exiling is important. One copy against Gruul sometimes as a “get them” card. If anyone’s playing mono White or Winota types of decks, this card clowns those strategies. In an open field its nice to have.

After the event I certainly pondered changes to the deck. I missed Silundi’s Vision for its ability to find Into the Story or Drown in the Loch. I would certainly revisit its inclusion and the way it rounds out the mana base. I’m sure I’ll put more time and energy into it later, but for now I would start with a build that looks something like this:

Thanks for reading as always, good luck in your battles. Drop a line anytime, I’m almost always open to communication through social media!