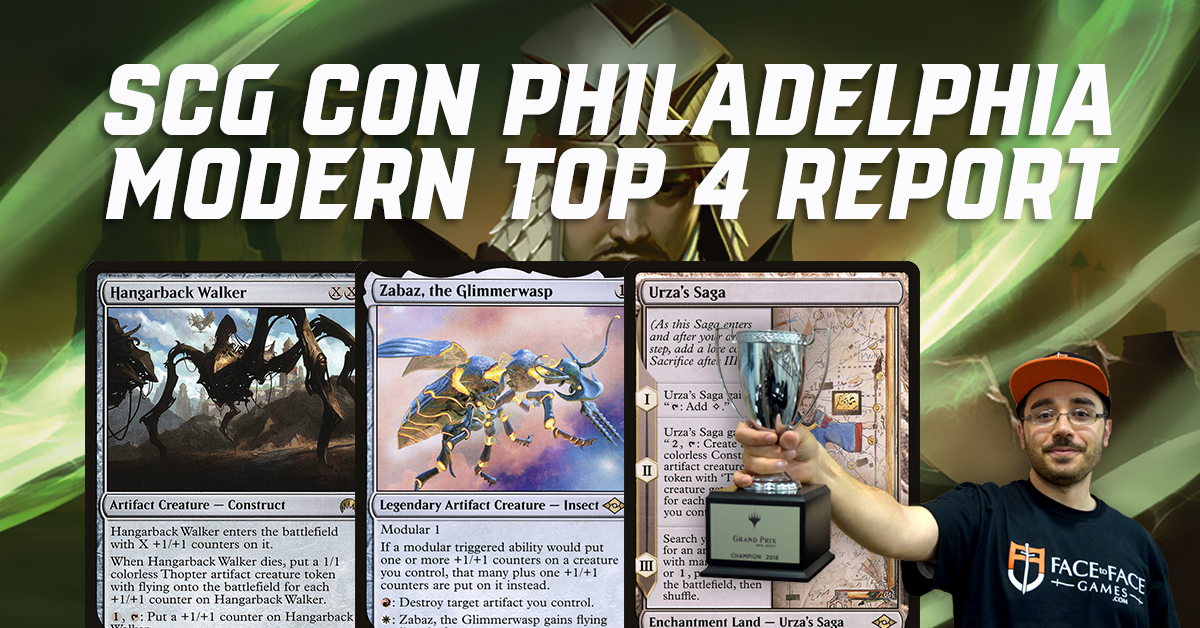 The SCG circuit has finally returned! To the surprise of no one more than 800 players showed up to battle Modern at SCG Con Philadelphia over two main events. The tournament was surprisingly just a one-day event, due to SCG wanting to run a Legacy 10k the following day. Each Modern 10K ended up being a grueling nine round event with a cut to top 8.

I actually had the time to test a bunch of different modern decks online. I went from 4C expensive stuff, to Death’s shadow to trying a bunch of Breach/Grinding Station variants. From there I moved on to the cascade decks (Living End, Rhinos). Each deck had a significant amount of weaknesses. I was not getting my win percentage as high as I would like during my testing. So when I did some research into the Las Vegas event that took place in January I saw that a rogue Selesnya Robots deck took down the tournament.

Surfing Twitter (as most Magic players do from time to time) I saw a surprising amount of people posting their own Robots lists. Each iteration felt more and more tuned. This only drew me closer to liking the deck since the early iterations felt like they had a bunch of bad filler cards.

After testing the deck a bunch here’s where I ended up:

After hearing again and again from other players that the best deck in the format was Grixis Death’s Shadow, I aimed to construct my version to beat the Shadow decks. Hangarback Walker is so strong already against a deck like Grixis, but the real MVP of the matchup was Welding Jar. This is due to the fact that this card costs zero mana and trades one for one with a removal spell that costs the opponent mana.

To further emphasize that last point, Esper Sentinel utilizes the mana advantage and has card advantage. While testing I had already decided that whichever deck I land on it would include this card. That’s because I believe this card to be the best card in Modern! Yep, I said it. Feel free to roast it, but I feel time will only support my hypothesis.

Modern has become the wild wild west of Magic, with tons of free spells, fast combos, and disgustingly powerful creatures that cost one mana. In a format like this one, tempo can supersede card advantage (card advantage being the golden strategy of Magic typically). Robots gets to be a fast strategy that’s consistent, wins tempo battles, and has lots of built in synergy. All these game theory assets have led me to believe that this deck is less fringe than people believed and simply just a powerful strategy.

Here were my matchups in Philly:

There was technically a physical trophy for first, but at this point in the event it was midnight (plus I had not eaten all day). We decided as a group to allow the 1st seed Ben Katz to get the slot and plaque without playing anymore Magic. Having gone 9-1 with the deck I was very happy with my card selection and build, and would’ve gladly run it back if I had an event the next day.

Now a new set has come out since this event and with it many powerful new cards. Boseiju, Who Endures seems to be the one people are most excited about. This card combined with Wrenn and Six can actually present a difficult wall to get through. The plus side is that not many decks are in a position to play an abundance of Forest so these locks aren’t going to happen super often. It actually hurts this deck even though our deck gets to play this card to some effect. We don’t want to be super reactive and especially not in a way that makes us lose card advantage. Even having lands that don’t produce both Green and White mana hurt the base of this decks consistency.

Some players have tried to cut the white to streamline in Boeiju, Who Endures. Their lists look more like this:

Gemrazer is super cool for giving a small creature a boost while getting the effect we want. I’m super curious to hear if the other new card, Iron Apprentice, was worth the slot over Zabaz, The Glimmerwasp. Obviously in a version without white or red sources, Zabaz gets worse and so probably doesn’t earn a slot.

This list gets to abuse one of my favorite cards, Throne of Geth. Combined with Llanowar Reborn and Hardened Scales. This deck can start to do bonkers things. I had a matchup versus Hammertime in Philadelphia in which they put a Hammer and a Shadowspear on a Puresteel Paladin and my creature on board was bigger so they couldn’t attack.

Now I can’t get behind the Mono-Green list simply because it lacks Esper Sentinel and Urza’s Saga! Urza’s Saga being cut I am most surprised by. Even if it gets answered by Boseiju you still can find a land. Also, I am surprised I keep seeing lists that do not play Steel Overseer. Every time I play this card and Welding Jar I get so excited – I wish I played the full 4 copies. In fact here’s how I would probably rebuild the deck post-Neon Dynasty to start tuning again to a new field.

I like that this list is more streamlined. The sideboard is greatly improved as I learned a few things about the ins and outs of sideboarding with this deck after the event. Artifacts like Torpor Orb were surprisingly weak because of the fact that we lose so much tempo trying to play them for two mana. On our second turn we really want to be assembling robots, so we have to find hate cards that cost one or zero mana if we want them to not be more of a hindrance than they are worth.

The Gemstone Caverns let me catch up to tempo loss against really fast combo decks like Belcher. Caverns also provide me with replacement lands for those matchups where Urza’s Sagas are more of a burden than a powerhouse (Spreading Seas + Force of Vigor decks or Gruul Moon). Boseiju, Who Endures complete the Urza’s Saga swap when needed and also act as additional answers to a Goblin Charbelcher or Urza’s Tower. I wouldn’t change much to the deck outside of these options because why mess up a good thing?

With that I’ll wrap up for now but stay tuned for additional tuning!