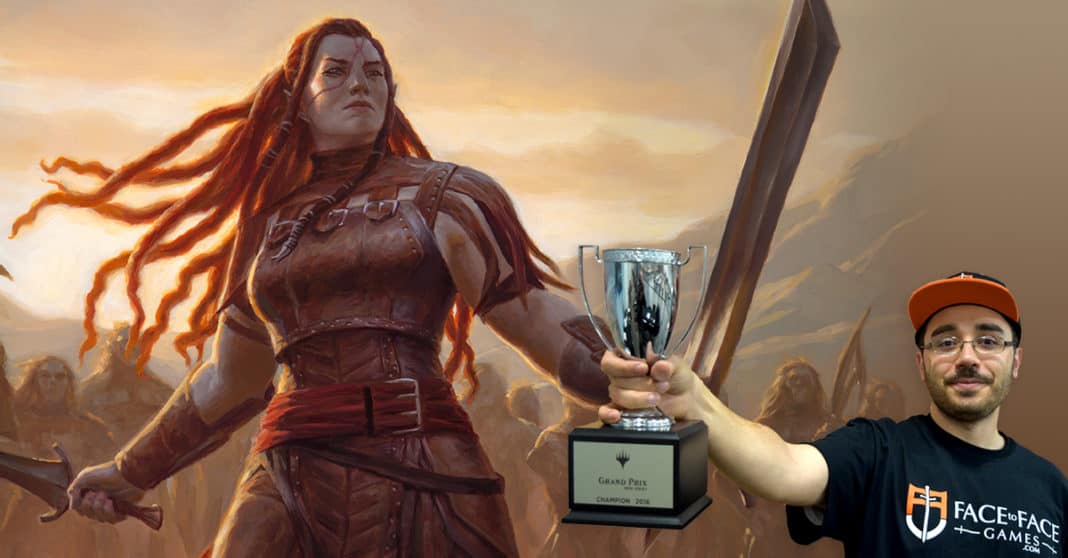 M21 hit the mean streets and now we are seeing a lot of new takes on old builds. Simic Flash was a tier below 1 for the last few months, but we’ve seen a resurgence with the addition of a “Mana Leak” in Lofty Denial. This card has replaced Quench rather nicely as having a much higher payoff and almost the same base.

Rewind to top off the high end of the curve has also brought an extra powerful card that lets you prevent the opponent’s play and slam a Nightpack Ambusher on the same early turn. From there you can play draw go and keep on gaining additional advantage while holding off the opponent from making any powerful plays with additional countermagic.

Mind you this deck is not my own. I certainly do not like people stealing the credit of others. Now I won’t leave you hanging longer, here’s the list that has already put up some great results online. 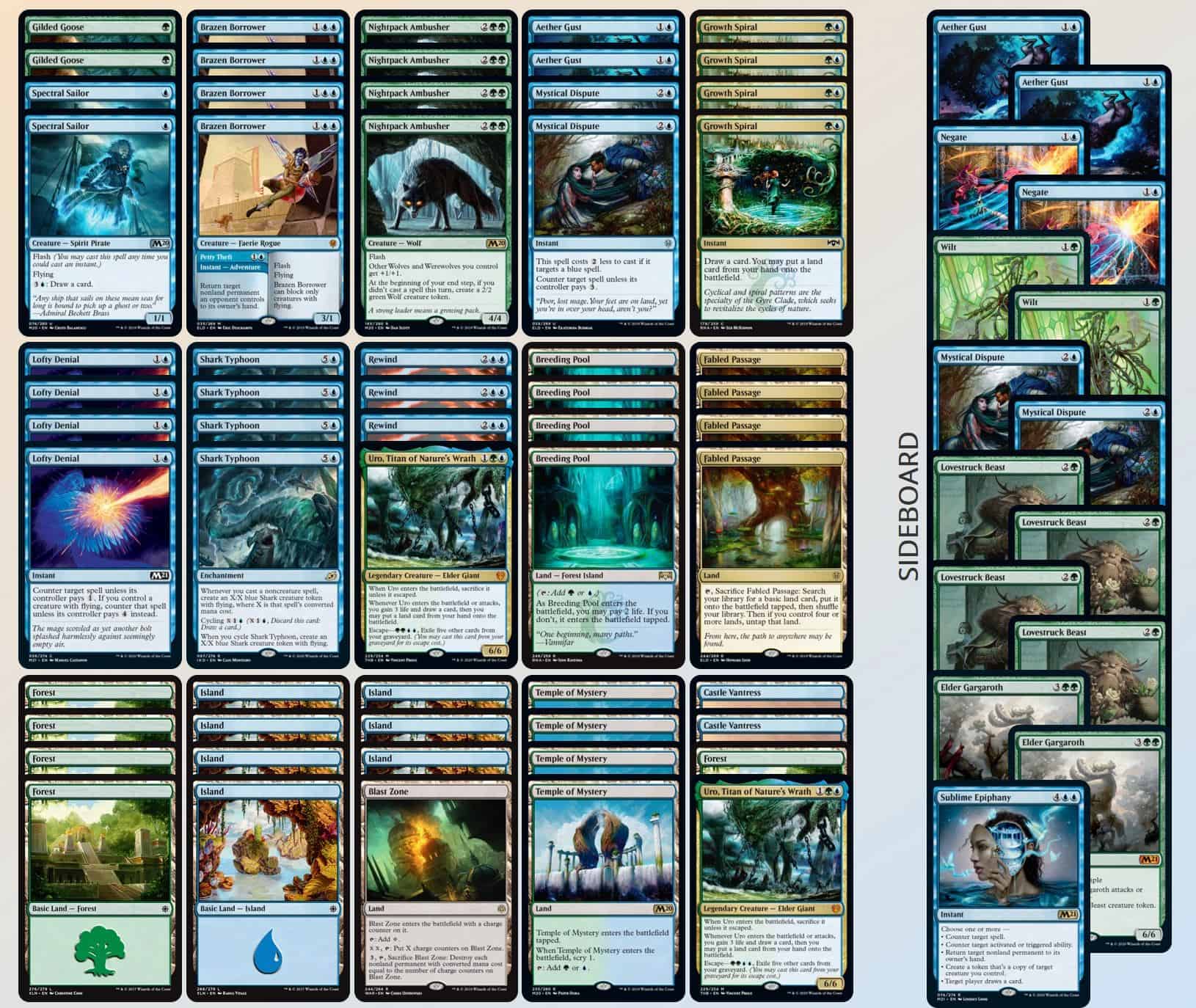 This deck preys upon the format front runner Temur Reclamation. The combination of ramp, big creatures, and counter magic tends to outclass the overcosted cards in Temur Reclamation. Most combo decks have a difficult time with this combination. In addition this build has a favorable matchup against other big Green decks.

If you feel the meta is shifting towards a bunch of Mono Red or White…. Abandon Ship! While Teferi, Time Raveler can be a problem for this deck. We also have a lot of ways to counter it, attack it, or even in some cases play through it. Bant can be a closer matchup, but with the right draws you’ll be a heavy favorite.

When sideboarding it’s important to note that the count of flyers is proportional to the use of Lofty Denial. Sideboard cards out with care and know which cards should exit alongside their counterparts. I love bringing in Sublime Epiphany against anything that isn’t super fast aggressive decks. It’s incredibly hard to play around and can do some devastating things.

Because we do not have access to good removal, your answer to other aggro decks is typically by bringing in Lovestruck Beast and playing a good defensive game. Generally you’ll need to sacrifice some of your countermagic role to accomplish that tactic. Don’t forget to sideboard in Wilt against Mono Green surprisingly enough.

Now on the other foot there’s another powerhouse that utilizes green in the format. This deck has been in development with none other than Andrea Mengucci. He paired Green with red and utilizes a somewhat midrange build to give his Gruul build more room to go over the top with card Advantage. 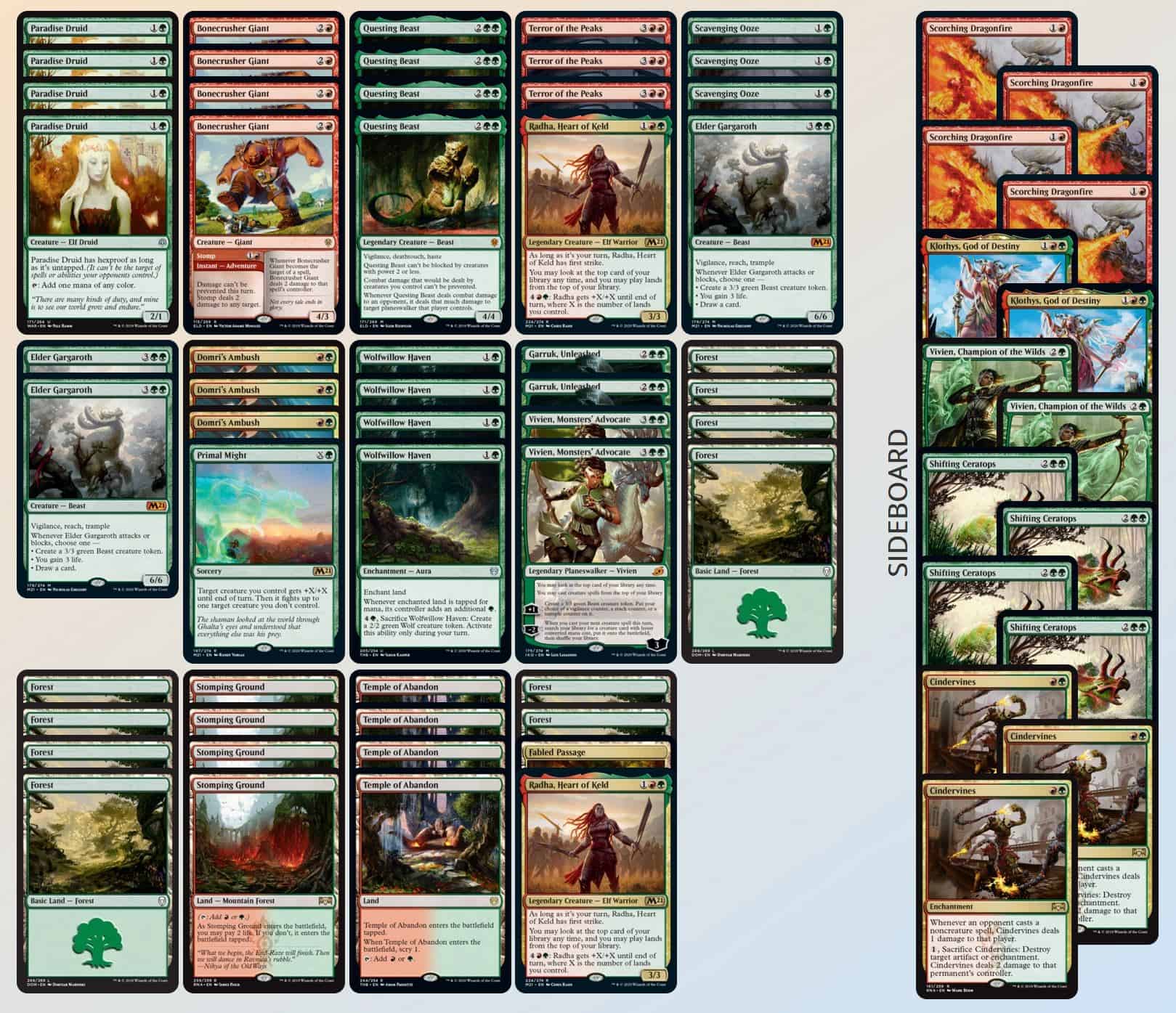 My favorite addition to this Gruul strategy is actually Scavenging Ooze. It cleanly answers opposing Uro, Titan of Nature’s Wrath. The reason that’s super important is Uro generally outclasses the creatures in Gruul. On top of which it gains them life back from tempo loss and puts card advantage into the mix. Truly an overpowered card in many ways.

Thankfully Scavenging Ooze can pluck it out of the graveyard before it becomes a problem. It even ensures the grave is empty if answered, making sure Uro won’t have enough fuel for a few extra turns. In matchups against aggressive decks it applies a growing body with life gain and when it Mutates, becomes an even larger trampling threat capable of putting games away quick.

Other new M21 additions are Elder Gargaroth which has so many abilities and amazing stats for five mana that it hardly needs explanation on why it’s worth an inclusion. I’m mostly surprised it’s not a legendary creature.

Radha, Heart of Keld is nice flood protection. Ensuring you additional land drops and improving draws is important in a Gruul shell. I do not know if this card is optimized for this deck, but in certain matchups it certainly goes a long way. My personal feeling is the stats on this card are just a little too underwhelming.

The singleton Primal Might is kind of a fun one of, but I wouldn’t give its inclusion too much thought. My guess is the fourth Domri’s Ambush was a flexible spot and the possible upside of Primal Might was worth the additional cost of the spell comparably.

Most of my thoughts on Gruul are in theory as I have not gotten in many reps with the deck yet. I would imagine that Gruul has more card advantage consistency. It’s extra weak to cards like Aether Gust still unfortunately and that card is being run in large numbers. Smaller fast aggressive decks can sneak under if they materialize their game plans and push through the finish line with cards like Embercleave or Torbran, Thane of Red Fell.

Other midrange decks I can see being this deck\s natural prey. Although Bant may have a comparable chance just on the power level of Elspeth Conquers Death alone. Generally speaking these decks need to be proactive on the mulligans and keep hands that materialize strong early game plans. If you fall behind the deck lacks good comeback power. That being said it can grind an opponent into the dust very quickly as well.

Hopefully these starting points help fuel you to good performance in any of your online events. Personally I’ll be testing Standard quite a bit for the upcoming Pro Tour Finals event in a few weeks. Check back for more decklists, updates, and strategy!