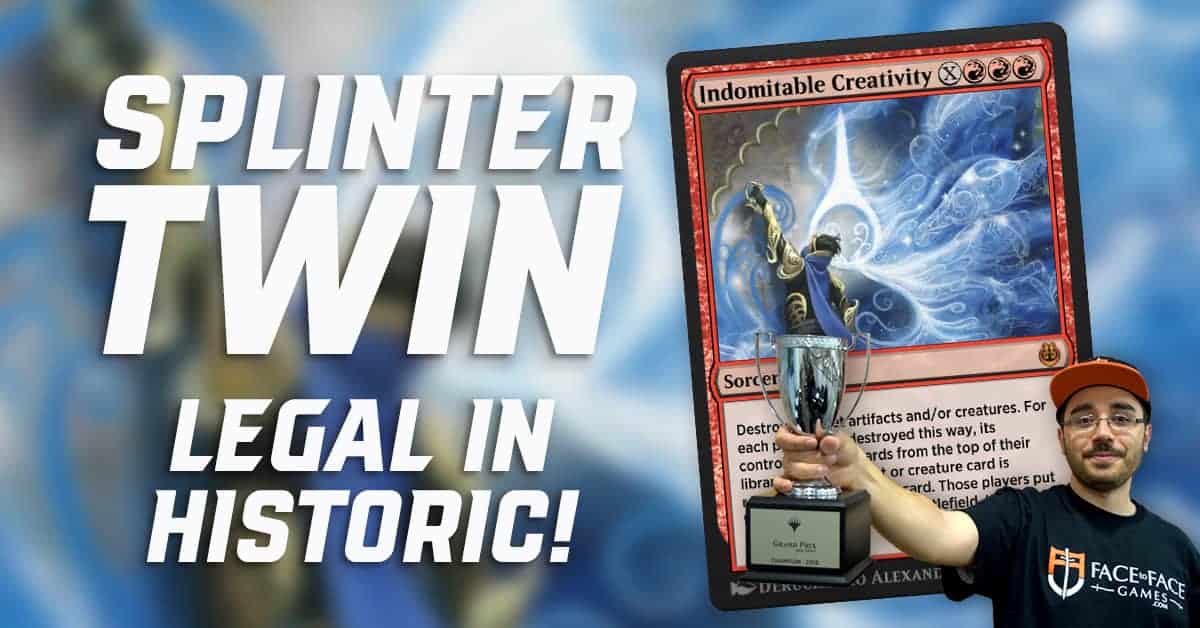 It’s back! Sorry for the click misdirection, but we’ve got the next best thing! First heard about from Kprinz’s stream, sorry not sure who the originator is unfortunately. Indomitable Creativity is the Splinter Twin. Sage of the Falls and The Locus God is the Kiki-Jiki + Pestermite. When we create two tokens and target them, it searches our library to put these both into play. From there we loot as many times as we like and each time get a 1/1 flyer with haste to then attack for lethal.

1
Sage of the Falls
1
The Locust God

4
The Birth of Meletis
4
Shark Typhoon

This deck is great at making the opponent’s card choices poor. Tale’s End does very little. Eliminate barely has a target. Narset is still a big problem, but most decks have Narset issues. We do run four copies of Shark Typhoon main deck, so hopefully we can pressure Narsets off the board. The early game plan is to survive, then out of nowhere we KO the opponent.

With Indomitable Creativity we need our two creatures to be in the deck. So, cards like Fire Prophecy and Valakut’s Awakening are excellent at shuffling them back in. Beware sac decks when casting Fire Prophecy, it’s not likely to resolve and allow you this secondary effect. Thoughtseize decks can also be a bit scary if you’re holding one of your two creatures as it shuts off the combo kill. This deck can surprise you with late game non-combo interaction. Hard casting a Shark Typhoon is many a pro’s favorite way to win a long game.

This next line came up in a ladder match against Gruul for me. Turn 2 Birth of Meletis, Turn 4 I am holding Sage of the Falls and so I use Indomitable Creativity on my 0/4 Wall to grab The Locus God. Not only is this a big thorn in my opponent’s side preventing them from an all-out assault, I cast Sage of the Falls on Turn 5 to combo off. There’re more than a few decks in Historic that can’t beat a Locus God on Turn 4, so keep this play in your back pocket and use as needed.

Some people will attempt to disrupt your combo with a removal spell. Here’s a few ways to play around that. For starters you can target more than two targets with Indomitable Creativity, so if they try and Abrade a Treasure or something, you’ll still resolve at least two searches. If they try to Heartless Act one of your creatures while the looting is on the stack. You can cycle a Censor to immediately begin the looting process once again, resolving all your triggers before Heartless Act can resolve and winning the game on the spot anyway. Of course, Pact of Negation is always there to help ensure similar outcomes, but I recommend having alternatives figured out in case you don’t “Have all these”.

For those that know Kprinz’s list was Izzet and I decided to get a little creative by adding White and going Jeskai. Playing cards like Forbidden Friendship wasn’t sitting too well with me and the creatures were dying too easily to be relied upon. Depths of Desire and Hornswoggle even were previously considered unplayable and even now only created half of the requirement two targets that are needed. I have found Hornswoggle to be a better alternative to Essence Scatter in the sideboard for when you need to answer some Muxxus problems still.

The white made the list feel like I was playing more powerful spells that inevitably got me to where I was trying to go anyway. The mana in Historic is really solid especially right now, but the fact that Jeskai gets two different Pathways and a Triome made this switch over really easy to perform even with the task of needing triple red mana and at least three plains for Birth of Meletis to find. To top it all off we got to improve our sideboard options with adding white.

While normally the Rakdos Arcanist decks can be a major thorn in our side, a resolved Rest in Peace is an easy way to turn that matchup very favorable. Authority of the Consuls is an excellent mirror breaker, but also quite solid versus Goblins and some other creature matchups as well. While normally I am not such a big fan of Timely Reinforcements, I did include it here because of the fact it enables Indomitable Creativity. The fact that it’s three targets instead of two allows us to utilize the play around tricks I mentioned above. That and the fact it comes out of the sideboard means our opponent has likely boarded out more than a few of their ways to answer small creatures in most situations. Some opponents just may not have many sideboard cards to bring in at all as this deck is somewhat newer.

I’m sure there are a million more scenarios to derive from these interactive spells, but I’ll leave you with this for now and to figure out some more on your own. Have fun dunking on people and get that old Splinter Twin feel back in your bones!