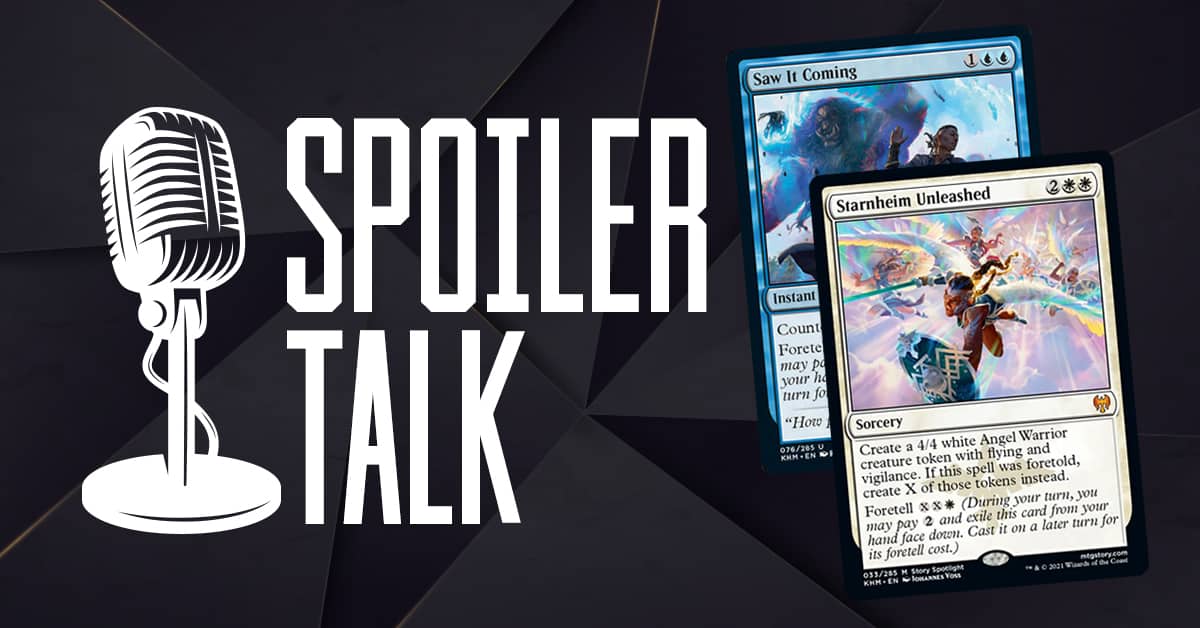 Today on Spoiler Talk I want to look at two new foretell cards from Kaldheim and their applications to Standard. Without further ado let’s take a look at Starnheim Unleashed, a new white mythic:

This harkens back memories to Entreat the Angels, but Entreat this is not. At worst you’re getting a four mana 4/4 with flying and vigilance, and at best you can foretell early on and amass a small army of angels later in the game. While this card definitely seems playable I do want to be cautious.

First off, for two angel tokens you have to spend five mana, on top of two extra mana for the foretell cost, giving you two tokens for seven mana. This is comparable to Emeria’s Call, but Emeria’s Call gives you an extra indestructible effect on top of being a versatile land that can come into play untapped. That being said, if I’m casting Starnheim Unleashed, I realistically want to be casting it for at least three or four angel tokens, which comes in at a 9 or 11 mana investment. Starnheim Unleashed definitely has versatility to it and scales with the game going longer. I’m not convinced this card will end up being a Standard all-star since your investment of 7 or 9 mana can easily be undone by an Extinction Event or Shatter the Sky. Resolving a huge Starnheim Unleashed will be fantastic against the likes of Gruul or Dimir Rogues, but you have to get to that point in the game first (and hope you don’t get Drowned in the Loch).

I could see this card slotting into a UW or Esper control deck as a one or two-of copy, even in a Yorion deck. I’m not convinced this card is all that impactful. The most recent effect of this card, Finale of Glory, saw fringe play at best, and this current standard format is comparable in power to the Standard format of a year ago. Time will definitely tell if this card is a Standard staple but with access to Emeria’s Call already I’m not hopeful this card will see play outside of a one or two of. Although I’d love to be proven wrong.

One benefit I will say about this card is the mystery of the foretell exile zone. With the current spoilers you could easily play a UW control deck with the likes of Starnheim Unleashed, Behold the Multiverse, and the recently spoiled Saw It Coming.

On the surface I’m not entirely impressed with Saw It Coming in the current Standard format. With this card you get the added bonus of being able to pay the foretell cost early on and cast ir for 1U later in the game. This allows you to make a play on turn two that can allow you to double spell on a future turn of the game. However, I’m a little more keen to play Neutralize, which will always cost three mana but also cycles for two mana. The one benefit of playing Saw It Coming, especially in a deck with multiple foretell cards, is the element of surprise. You can bluff a Saw It Coming by foretelling a Starnheim Unleashed or Behold the Multiverse on turn two, perhaps putting your opponent on guard and waiting longer to deploy some of their potent threats. With the power level being so high in standard as it is already, I’m not convinced mind games can outperform some of the faster and resilient decks like Gruul and Mono Green Food.

I’ll definitely be looking out for more foretell cards in the upcoming spoilers. With enough foretell cards there might be a viable strategy in Standard that can make use of bluffing with so many diverse cards. While I’m hesitant to play cards like Starnheim Unleashed and Saw It Coming in my Kaldheim UW control decks, I’ll at least be giving them a shot. Maybe I’ll happily be proved wrong!