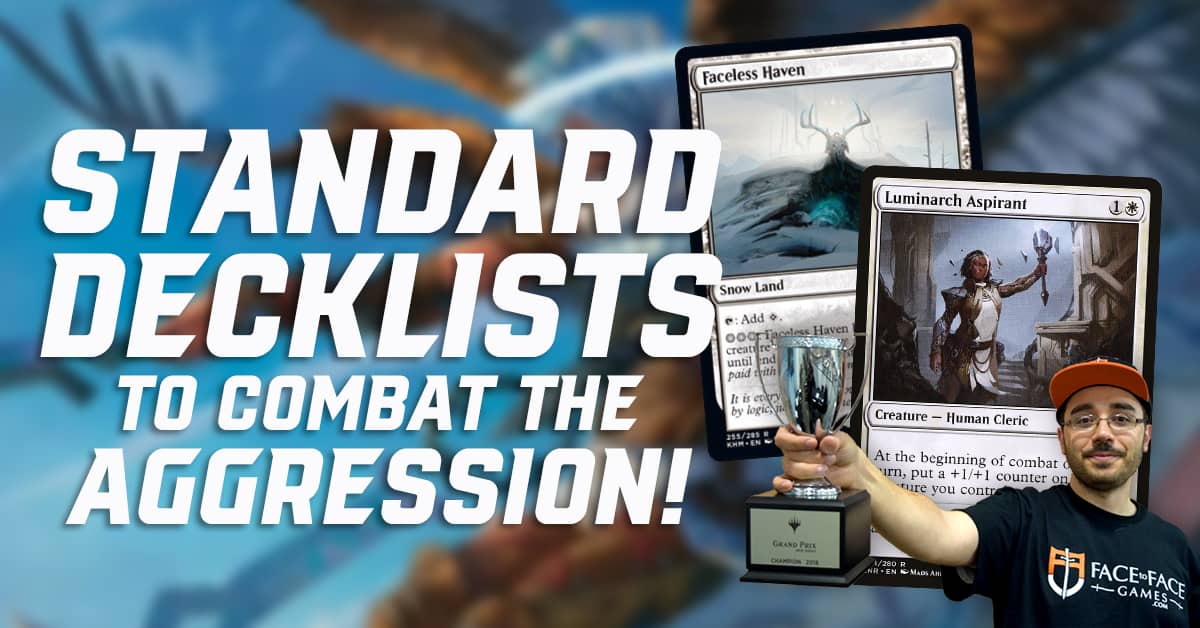 Standard has only been new for about a few weeks. In that time people have found an amazing amount of data to compile. As each new Standard keeps getting broken faster and faster. It’s up to innovations to keep ahead of the curve.

For those not in the know. The data shows White Weenie surprisingly at the head of the pack. With a minor snow sub-theme added into the mix mostly for Faceless Haven. Decklists are showing a lot of variation but essentially look something like this:

If white’s not your flavor, there’s a great red build that’s very similar. The results are almost as promising, just a percent or two behind. Those builds look something like this:

Me personally? I don’t want aggro to be the way to go. It’s not outside of my comfort zone, but I like to be more in control whenever possible. Which makes me really sad that Rogues is at 46%-win percentage in the initial data. I’d like to chalk that up to play skill, but I think there’s enough data all around that we just have to acknowledge the numbers.

Luckily Sultai control has been doing well enough to consider. With a win percentage closer to 52% and a lot of room to still find the ideal build, there’re even a few directions one can go with it. The first decision matrix is to go Yorion or not. The next is to go Ultimatum or not. Now if you ask me there’s a couple ways to approach that question. If you go Ultimatum you certainly benefit from having more options with the Yorion route. Is Yorion enough to play an 80-card deck without an Ultimatum package? My personal opinion is no, it’s not worth it.

This of course incorporates the Ultimatum strategy with the tools to fully facilitate its effectiveness. Build #2 is going to be the more straight forward 60-card route listed here:

The advantages to this build are a more streamlined early game. While it loses some of the late game potency as a result, the early game is often more crucial. However, this is most impactful when playing versus another control deck and the strength of the late game determines the victor there.

Maybe it’s just me, but I feel like this deck is very well positioned for the meta and might be my top choice right now:

Having decent game against aggro but also being very solid against control decks is exactly where I want to be. Plus, who doesn’t love them some Izzet? That’s all for now, hopefully you’ve enjoyed the mini-tutorial and the deck lists are a good place to start. Until next time, thanks for stopping bye!